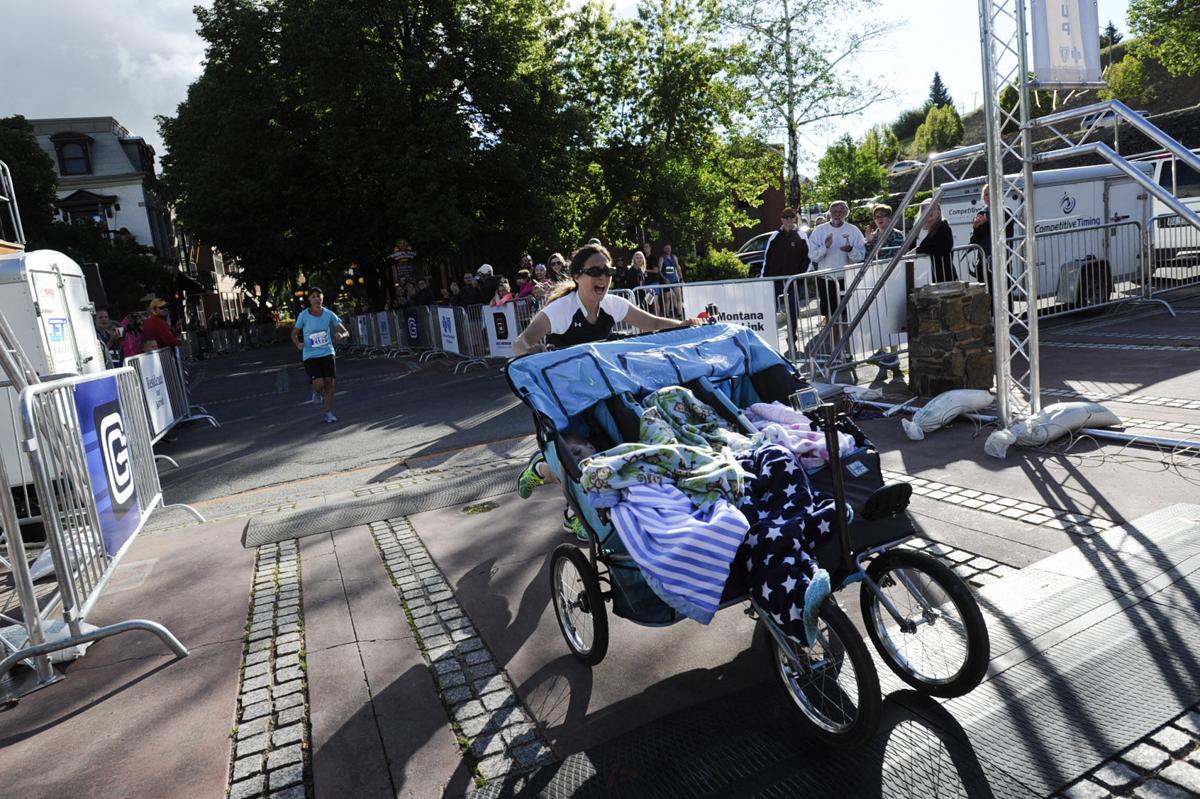 Theresa Marie Pitts crosses the finish line Saturday morning after setting an unofficial world record for running a half-marathon behind a three-seat stroller with a time of 2:01:11.53. 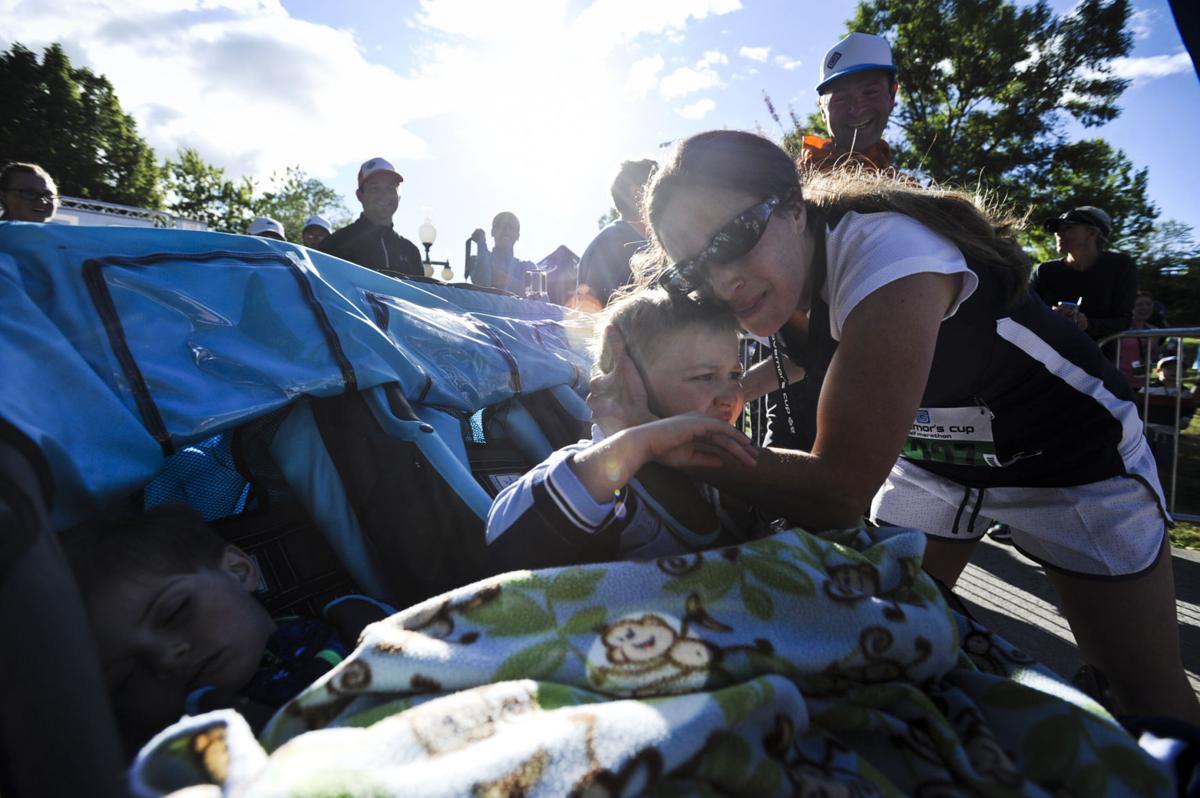 Theresa Marie Pitts hugs her children Saturday morning after setting an unofficial world record for running a half-marathon behind a three-seat stroller with a time of 2:01:11.53.

Unofficially, she became the speediest mother half-marathoner in the world.

Theresa Marie Pitts of Kalispell, 38, finished the 2017 Governor’s Cup half marathon in a time of 2:01:11.53, pushing her three kids in a stroller and unofficially breaking the world record, “fastest half-marathon while pushing a triple pram stroller.”

The mark betters Suzy Goodwin of North Carolina’s reported time in October. Goodwin ran a half-marathon with her triplets and finished in a time of 2:01:19, according to ABC News.

“It was a good challenge,” Pitts said after receiving recognition at the cup’s award ceremony. “It was beautiful and bru-ti-ful. It was hard at the end. I had to dig deep and push it. I’m very, very happy with my time. It turned out great.”

Pitts and her kids, Evan, 4, Anders, 2, and Avi, 4 months, will submit the “evidence” to the Guinness Book of World Records and expects about a 12-week waiting process to confirm if the record will stand. She said Guinness offers an expedition of the record process, but costs $1,000.

“We have a lot of mouths to feed,” said Pitts, who alongside her husband Ryan, are raising eight kids with the oldest at 17 years of age, “so we’re going to be patient and faithful and hope things work out.”

Pitts’ legs lugged about 145 pounds with the stroller. Equipped with snacks and other child necessities -- including two Go-Pro’s for good measure -- the stroller had all the bells (literally, a bell) and whistles she needed.

And for their part, Evan, Anders and Avi were great copilots. Pitts said the crew was awake for the start of the race, but after about 30 minutes dozed off, and allowed her to focus all her energy into running. While Pitts was running a half-marathon, she was first and foremost attending to her kids’ needs, which on Saturday were minimal.

“My little one could have fussed,” Pitts said. “I would have to pull over and take her out and the time keeps rolling. It’s amazing the kids were so wonderful.”

Pitt’s family, save her oldest son, were in Helena to watch their mother make a run at the record. She enjoyed the scenes of the race so much, Pitts anticipates returning to Helena for a future Governor’s Cup.

“Everything is so organized,” Pitts said. “The people like Jesse Zentz, John (Doran) … the people I was coordinating with were amazing. They were so helpful. I had so many questions to go over before this happened. They were so wonderful. I couldn’t have done this without them.”

Pitts will one-up herself in about a month in Missoula, where she’ll take her triple stroller out for an attempt in the Missoula Marathon.

For more of her story, Pitts talked with Independent Record last week. Check online at helenair.com/sports/running/montana-mom-chasing-world-at-gov-cup.

Elsewhere in the Governor’s Cup, Montana’s Gov.Steve Bullock ran the half-marathon and then the 5K with his daughter Alex, who recently graduated sixth grade.

“It was awesome,” said Alex Bullock, who has been doing the Governor’s Cup with Montana’s most prominent political family since she was 4, “I enjoyed it.”

Bullock said he’s been doing the Cup for “25 or 30” years.” He elected to run the half-marathon this season because he hasn’t focused on marathon training, and the half allows him to “survive and still have a fun day.” The governor has run in each of the distances -- 5K, 10K, half marathon and marathon -- throughout the years. On Saturday, he finished third for his age group in a time of 1:41:55.25.

“I don’t know if I ever really prepare,” Bullock told reporters, chuckling. “I typically go running every morning. It gets my day off to a good start. The rest of the challenges of day are easier after getting a good run.”

Messmer and Wolfe prevail in marathon

Running in cool weather under intermittent cloudy skies, Mark Messmer and Jenny Wolfe are the 2017 Governor’s Cup marathon champions. It was t…

Theresa Marie Pitts crosses the finish line Saturday morning after setting an unofficial world record for running a half-marathon behind a three-seat stroller with a time of 2:01:11.53.

Theresa Marie Pitts hugs her children Saturday morning after setting an unofficial world record for running a half-marathon behind a three-seat stroller with a time of 2:01:11.53.