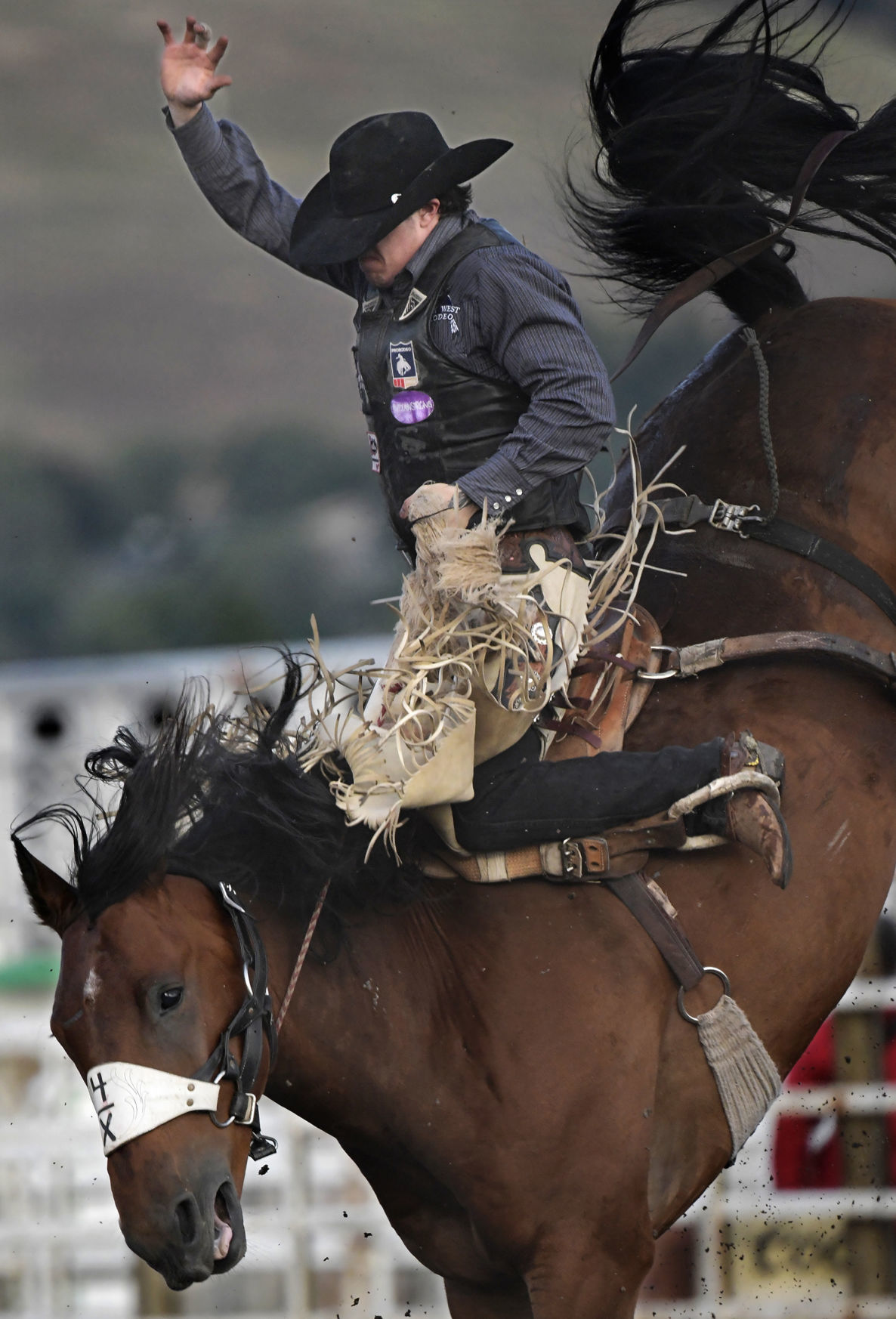 Deer Lodge's Chase Brooks leans into his horse during saddle bronc competition on the final night of the Missoula Stampede at the Missoula County Fairgrounds Saturday. Brooks scored 90 on the ride, one of the best scores in recent Stampede history. 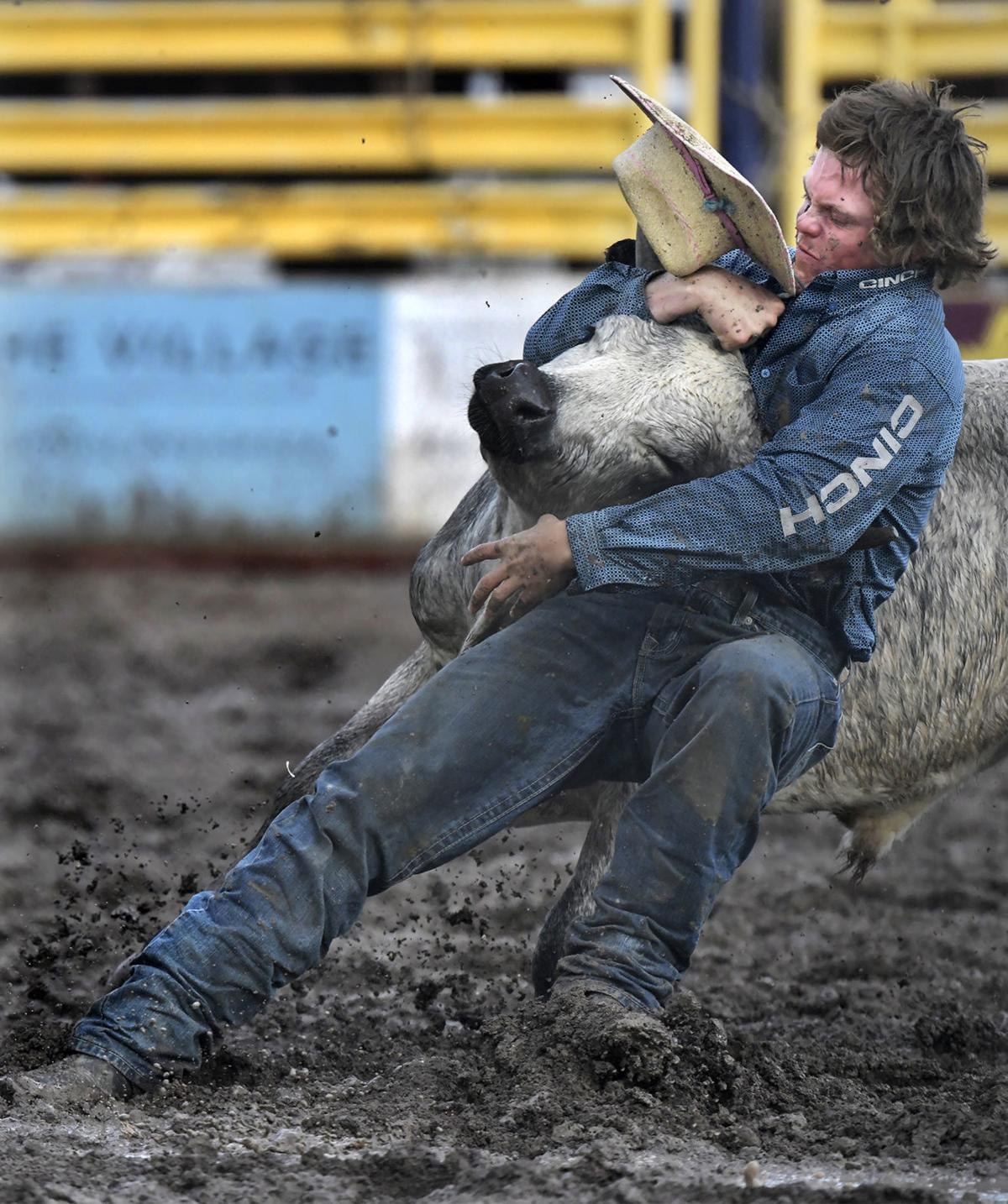 Tucker Allen, of Oak View, California, loses his hat as he slides in the mud during the steer wrestling competition. 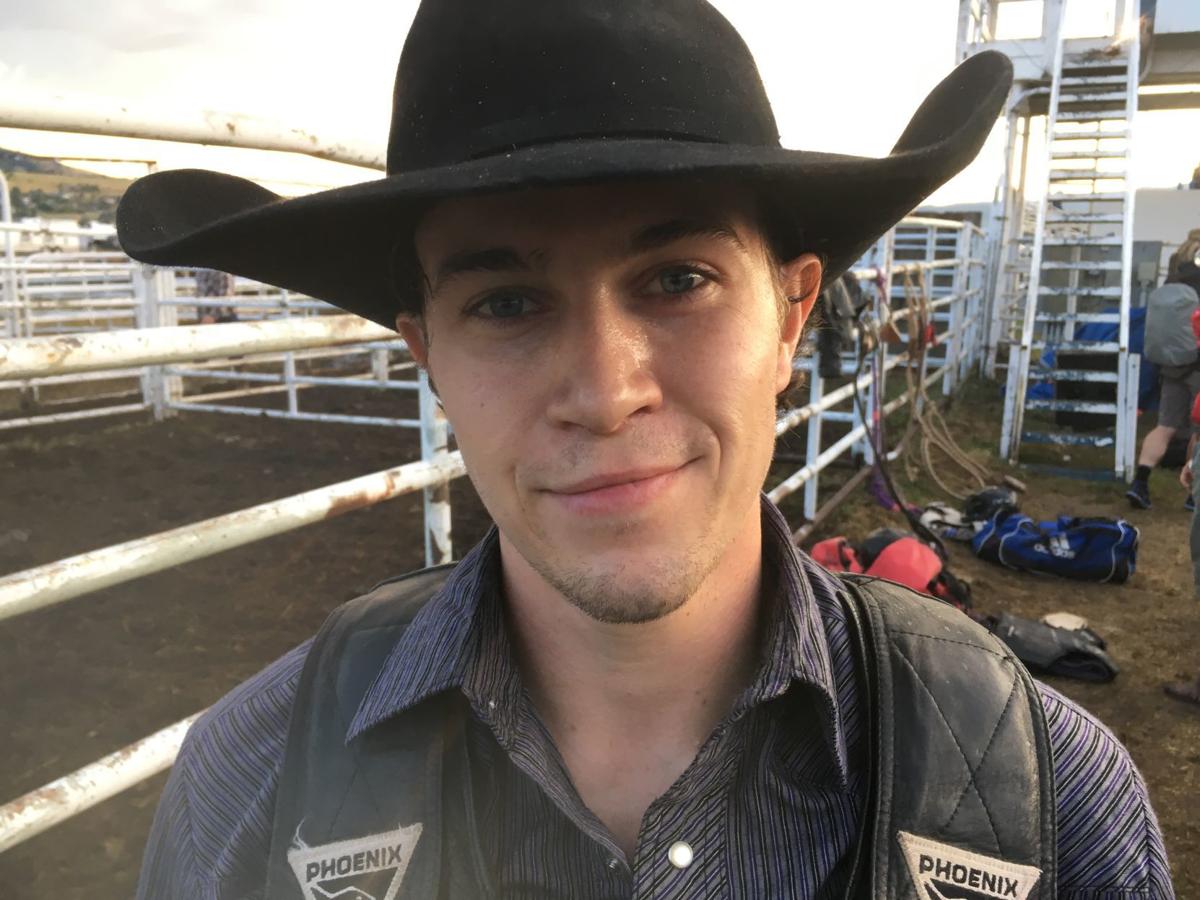 Deer Lodge's Chase Brooks leans into his horse during saddle bronc competition on the final night of the Missoula Stampede at the Missoula County Fairgrounds Saturday. Brooks scored 90 on the ride, one of the best scores in recent Stampede history.

Tucker Allen, of Oak View, California, loses his hat as he slides in the mud during the steer wrestling competition.

MISSOULA — Chase Brooks grew up 80 miles east of Missoula, so he's no stranger to the Stampede rodeo.

Still, Saturday's visit to the Western Montana Fair was easily the most memorable for the saddle bronc star from Deer Lodge.

Brooks, ranked No. 5 in the Pro Rodeo Cowboys Association (PRCA) world standings, posted a rare winning score of 90 aboard Black Tie. It marked the first time in years a cowboy came so close to a perfect 100, and he did it in the mud in front of a rain-soaked crowd.

"They threw him in the broncs and man I hope they keep him there. That was awesome. And the crowd, man they eat it up when a Montana guy does well."

Brooks put his score in perspective afterwards. The 25-year-old had never broken 90 until the National Finals Rodeo last year. He called the mark "a whole different animal" and said he felt fortunate to stay aboard the feisty Black Tie.

"The way he just blew out of there, I about thought he was going to have me," he said. "He's electric as hell right out of there. Then he took that big kick out there and slipped.

"It just shows how athletic he is, keeping his feet through that and still bucking the whole time."

Idaho's Ruger Piva, a former college bull riding champ at Montana Western, was able to score a respectable 76 in the last event of the evening. For him, pondering arena conditions is never a good idea.

"You can't think about this too much, you just gotta do it," said the 24-year-old. "I didn't know anything about the bull but I figured if he's here he's gotta be good. he was hard to ride but I'm glad he got it done."

Piva is ranked 19th in the world but you get the feeling he's far from satisfied.

"It's been a good summer but it hasn't been a dream summer," he said. "I've let a couple go that I shouldn't have. I tell you what, it will be a dream summer if I make it to No. 15 in December. That would get me to the NFR. I've been top 30 two years but never made it to the NFR."

Saturday was good night for a pair of western Montanans in steer wrestling. Will Powell of St. Ignatius seized second place with a time of 4.0 seconds and Bart Slaney of Whitefish posted a mark of 4.1 seconds, which gave him a third-place finish. California's Stan Branco won the event at 3.7.

Bill Speltz is in his 13th year as Missoulian Sports Columnist. He also guides the sports dept., scheduling day-to-day coverage. Do you have a story idea? Email Bill at bill.speltz@missoulian.com.