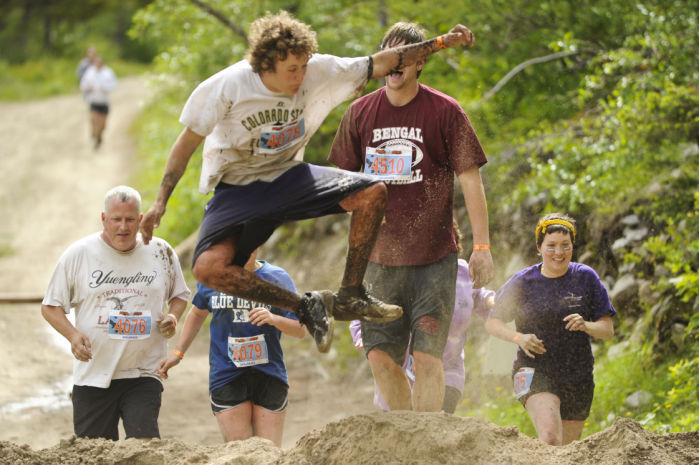 Runners splash their way through the final mud pit near the finish line of the inaugural Montana Mucker at the Great Divide Ski Area. The mud run is back for the third consecutive year, and will be held Saturday. 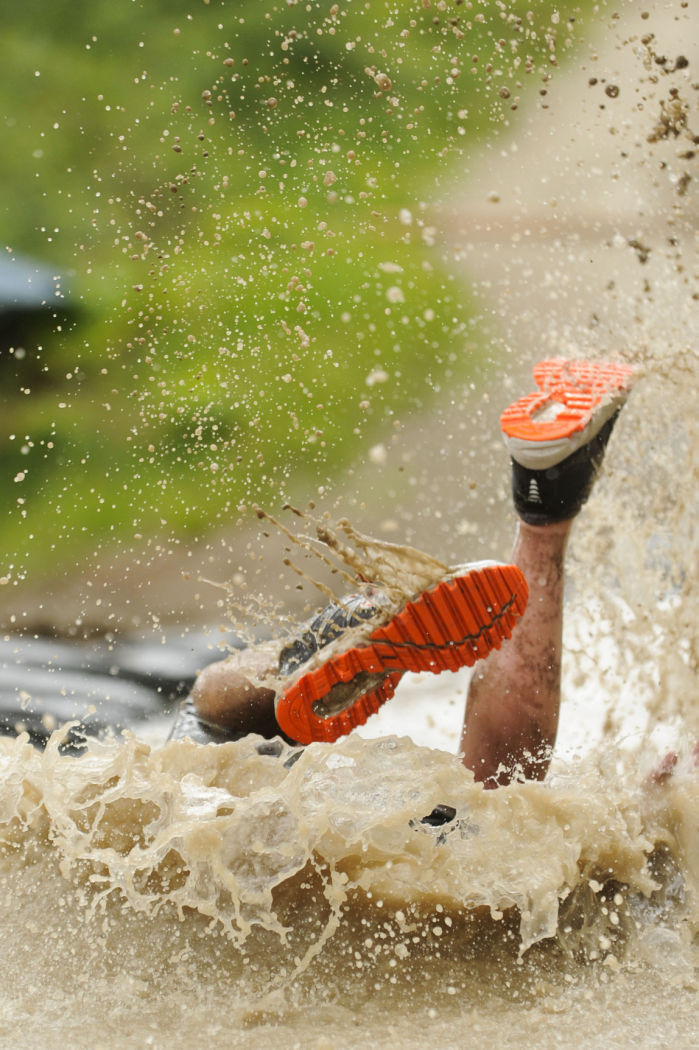 A runner goes head-first into a water pit at the Montana Mucker. The mud run makes a return to the Great Divide Ski Area on Saturday.

It is challenging but accessible, filthy but fun.

And, best of all, Saturday’s third annual Montana Mucker, to be held once again at the Great Divide Ski Area, will pump thousands of dollars into Helena-based Intermountain. The organization provides therapeutic care to children and families facing extraordinary challenges, helping them create and sustain nurturing environments where children can flourish.

“It may end up being upwards of $10,000 dollars going to them,” said event director Christie Magill. “It takes 120 volunteers to put this on, and that’s where they’ll make most of their money. Intermountain gets paid for every volunteer hour -- and most of the volunteers will be their people. They also get a portion of each race registration.”

Many races now make available the option for entrants to donate to a charitable cause, but usually that requires an online promo code. For the Mucker, there is no code. The event simply donates a portion of each entry fee to their charitable partner.

“Just by registering, they’re giving to intermountain,” Magill said. “I think, with any non-profit, any dollar raised helps. And they’re serving about 2,500 kids a year. So every single race registration is getting money to Intermountain, and we love that.”

The event will cover between 3 and 4 miles, including the ski hill and surrounding mountainsides at the resort. Racers will wind their way through well-marked and often well-mudded trails, and will encounter multiple obstacles including hay bales to hurdle, walls to climb and water pits to wade.

One of the most infamous obstacles on the course over the first two years -- organizers call it the Turtle Trap -- will once again challenge racers and their footwear.

The Trap is a section of the course which winds through semi-low-hanging trees and brush, in an area which is already a bit swampy. Add a bit of running water and hundreds of feet softening up the muck, and you’re left with a trail that at any step can have you sinking up to your waist. The fight then is to not only escape, but to do so along with your shoes.

(Mud run tip: Some recommend a thin strip of duct tape, wound two to three times across your laces and under your arch. More often than not, however, tight double-knots and a toe-first pull out of the mud should do the trick.)

But, if you do come up shoeless, you won’t have to stay that way all day.

“We’ve learned from the last two years. This year, we’ll have foam goggles available and we also got disposable flip flops we’ll be selling up there,” Magill said. “We had a big group of people that came out with no shoes last time!”

Race construction starts Monday, and the mountain crew will be building most of the week.

It’s a lot of work, Magill said, but it results in a lot of fun. And, while the event is centered around that idea, organizers have also worked to make it something the more serious and competitive runner wants to take on.

The first heat, at 10:20 a.m., will be the elite heat. There’s still no clock, but the top three finishers will receive prizes from Bob Ward’s. The rest of the heats will leave starting at 10:40, and will take off every 20 minutes.

“It’s a good trail run, and we just really wanted to engage the more serious runner, too,” Magill said. “So that’s why we did the competitive heat. I haven’t actually seen the prized yet, but I’m told they’re worth upwards of $200. It’s a good package that they put together for the winner.”

Food, music and various vendor stations will be available at the site as well, and with beautiful weather forecasted – right now temperatures are expected to be in the low 80s – Magill anticipates a large crowd. More than 500 have already signed up, and Helena tradition says that there will be a last-minute surge. Half of those running last year signed up in the last 10 days.

Online signup is still available at montanamucker.com, or locally at Bob Ward’s. On-site registration is available as well, but there is a price bump, from $50 to $75.

The race is open to all, but there’s also a 1-mile Mighty Mucker, designed for kids 12 and under. The cost is $10, and a parent will be allowed to run alongside their mini mucker at no charge.

Packet pickup is scheduled for Thursday and Friday at Bob Ward’s.

“We have other races, and we have non-profits assist with them, too,” Magill said. “They’ve all been amazing to work with. But besides the Snow Joke, this is the largest race we have in our menu of races. And what’s so cool is that Intermountain has the most amazing volunteers. They’re just so energetic, and I could ask them to do anything, really.

“It’s not a job for them. They’re just out there doing it to spread the word. And it makes all the difference when the non-profit is so engaged. It really does. So we’re planning to have a whole lot of run, and get Intermountain’s name out there.”

Troy Shockley is on Twitter @IR_TroyShockley and can be reached at troy.shockley@helenair.com.

Runners splash their way through the final mud pit near the finish line of the inaugural Montana Mucker at the Great Divide Ski Area. The mud run is back for the third consecutive year, and will be held Saturday.

A runner goes head-first into a water pit at the Montana Mucker. The mud run makes a return to the Great Divide Ski Area on Saturday.