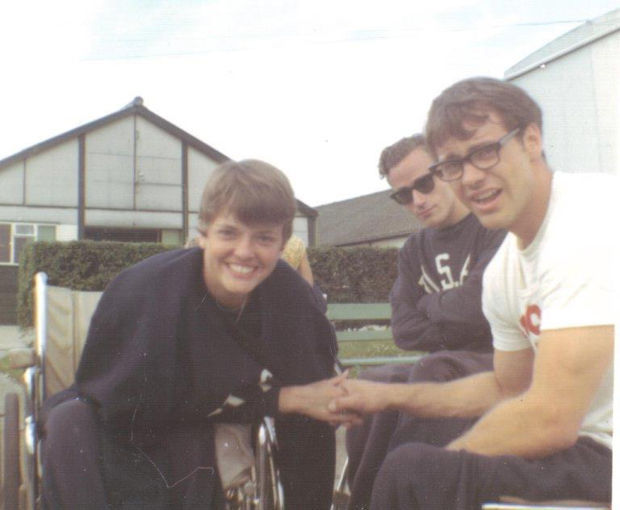 Judy Webb (Harris) and Tim Harris, far right, are pictured near the track between competitions at the 1967 Pan Am Wheelchair Games in Winnipeg, Manitoba. 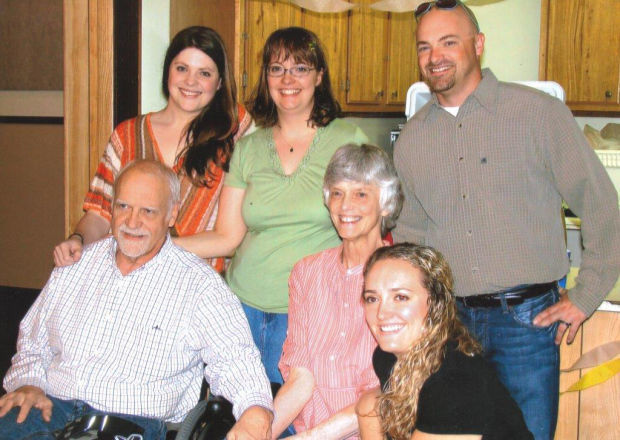 Paralympic pioneers Tim and Judy Harris pose for a family photo with their four children. Back row, from left, Annie, Molly and John. Front row, Tim, Judy and Kate.

When it comes to international athletics, Tim and Judy Harris might be Helena’s best-kept secret.

Fifty years ago, Tim Harris garnered a total of 11 medals at the 1964 Summer Paralympics in Tokyo. Four years later, his future wife Judy Webb captured Silver and Bronze at the 1968 Israel Paralympics.

So where does the Harris couple display those 13 Paralympics medals, which are the equivalent of the Olympics for people with disabilities?

Tim and Judy’s medals are stored in a shoe box.

And their dozens of press clippings, yellowing and folded, are randomly and loosely stored, between the covers of a scrapbook.

Did not overcome anything

It’s not that Tim and Judy Harris, who have both been wheelchair users most of their lives, are not proud of their athletic achievements.

It’s just that the couple’s priorities dictate a belief that what they accomplished was nothing to be boastful about.

“We did not overcome anything,” explained Judy during an interview in their home, where they both glide deftly in wheelchairs from room to room. “We were just kids having a lot of fun, enjoying the competition and making great friendships around the world. And I think the most important thing was experiencing what true sportsmanship is supposed to be.”

Tim and Judy retired from competition after getting married in 1970. They went on to have successful professional careers, can do just about everything everyone else can do and have been lifelong advocates for people with disabilities.

And according to one of their daughters, the Harris children were brought up just like everyone else.

“When I was small, I never thought about how my parents were different,” Molly Harris related. “I worried about the neighbor boy’s parents, who clearly did not know how to use a wheelchair.

Tim Harris attended high school in Rockford, Ill., before entering the University of Illinois in the fall of 1961. He had contracted polio at just 18 months old, and by the time he reached college he was competing in athletics in a wheelchair, although he was still about to able to move around on crutches.

As a freshman at Illinois, he played 6-man wheelchair football.

“We played indoors, and it was brutal,” recalled Tim. “It was two-hand touch above the knees, and there was a lot of pushing and shoving going — you blocked with the big wheel, bodies and chairs were flying around all over the place.

The inaugural Paralympics took place in 1960 and ran in conjunction with the Rome Olympics. From 1960-72, only wheelchair athletes were allowed to compete, but beginning in 1976 athletes with other disabilities were included in the games.

Tim’s first international competition took place in England in 1963, and he remembered that two lengths in the swimming event was announced as “two lengths of the bawth.”

At the 1964 Paralympics in Tokyo, which took place in the same venue as the Olympics, Tim was part of a U.S. team that led all countries with 123 total medals.

Harris garnered three gold medals, in the track 180 meter wheelchair relay, the swimming medley relay and as a member of the basketball team.

“I certainly never expected to earn 11 medals,” the 22-year old Harris told an Illinois sports writer upon his return stateside. “I would’ve been real happy to win just one.”

One of best in the world

They participated around the world, between them traveling to England, Spain, France, Jamaica, Scotland, Ireland, Argentina, Italy, Greece, Hawaii and Manitoba.

His best throw in the discus was 130 feet in exhibition, and 112 feet in competition. He said they would usually have one or two guys sitting on the ground holding the chair down so it wouldn’t flip over during throws.

In all, Tim guesses that he collected over 30 gold medals and numerous championship trophies, while setting no less than seven world records. The actual numbers may be higher, however, considering his modesty.

One of his best years was 1965, when Harris — who possessed a powerfully muscled upper body — captured six national championships for Illini’s “Gizz Kids” and seven golds at the international (world) games.

“I never lifted weights for training; most of my strength came from just having to walk on crutches and working in a warehouse,” he said, adding that he did own “a 240 pound bench press.”

In 1970, Tim was inducted into the National Wheelchair Sports Hall of Fame in New York. A sports writer noted, “At one time Tim Harris was one of the best wheelchair athletes in the world.”

At 15 years of age, Judy contracted a neurological disorder that left her a paraplegic.

After graduating from Billings Central in 1966, she attended the University of Illinois because it offered the opportunity for people with disabilities to compete in sports.

Her forte was archery, although back then everyone was asked to compete in other events. The annual national tournament took place at the New York Wheelchair Games, and from there the international team was chosen. Judy captured three successive national championships, from 1967-69, which qualified her for the International Stoke Mandeville Games, in England.

In 1968, she competed in the third Paralympics, which was relocated from Mexico City to Israel.

“The competition was really stiff, and I placed second and third,” Judy related. “The second was to a world class archer from South Africa (Margaret Harriman). She beat all the men, and even won competitions against non-disabled archers.

“My third place was in the FITA round. We competed for five straight days, and I remember being very sore and blistered by the time it was all over.”

Judy was also placed on the women’s basketball team, where she was not alone in competing in a sport out of her element.

“We practiced at night, and we were the evening’s entertainment for those in the stands because we were so bad,” she laughed.

But the United States must have made a few baskets, bringing home the bronze medal.

They also mentioned inaccessible bathrooms and being pulled up staircases backwards.

One unforgettable occasion took place in Ireland, when they visited the Blarney Stone. Tim was able to make it to the top and back of the 90-foot climb using his crutches, while Judy made the journey riding piggy-back on her coach’s back.

Just as compelling as the Harris’s athletic achievements is their relationship.

“When I first got to Illinois, my coach was a friend of Tim’s, and it wasn’t long before my roommate and I got sick of hearing all his stories about the great Tim Harris,” Judy recalled with a smile.

Tim noted that their first meeting was quite a “flop.” Literally.

“I was driving a salmon-colored Pontiac Continental, and I pulled up to the practice filed where Judy was,” he recounted. “There was a hedge around the range, and when I put one crutch on the other side and tried to vault over it, I fell flat on my face.

“She was not impressed.”

“I thought he had a huge ego and was very pompous,” Judy said. “But when we went to the ’67 nationals in New York, Tim was in almost every event and was running around helter-skelter to compete.

“The weather was really crappy, and I saw this same guy wearing just a T-shirt in freezing weather, going out of his way to help his competitors. At internationals in England, I watched him helping an opponent from Poland, even though neither understood each other’s language. It struck me that this was the true spirit of sports, and by the time we left, I was in love.”

The couple were married in a wheelchair ceremony in Billings in 1970. After returning from Illinois to Billings in 1972, the following year they relocated to Helena, where they have resided for the past 41 years.

Tim and Judy brought up four offspring in the Capital City, including Annie, Molly, John and Kate.

“My folks gave us a great love for learning and a curiosity about life,” Molly wrote. “Mostly though, my parents taught me love both in their absolute adoration of me and my sisters and brother, and their 44-year love affair with one another.”

Tim and Judy recently watched the Opening Ceremonies of the 2014 Winter Paralympics in Sochi on TV with a somewhat nostalgic mindset.

Judy said they look back on their days of competition with fond memories of being pioneers in wheelchair sports.

“We were there at the beginning of athletics for people with disabilities, and it was a lot of fun being pioneers of our sport,” she said. “And the best memories are of sharing the competition with our opponents, and the camaraderie we developed with each other.”

“It fills me with indescribable pride to know that my parents were world-class athletes, and that people all over the world have seen them,” she wrote.

This week Sidelines recaps a couple victories on the pocket billiards tables, and another title on the lacrosse pitch by a former resident on …

Helena High narrowly bested Capital in combined team score on Thursday in what was the first crosstown track and field meet since 2019.

Shawn Graham was announced as the new Helena Capital wrestling coach on Tuesday.

The dismissal of five Lady Griz players — four from Montana — signals the end of not only an era but a formula that Robin Selvig used to build the program into one of the greatest in women's collegiate basketball history.

Helena High and Capital tennis teams were 2-0 in girls duals on Saturday against Skyview and Senior.

Retired players are eligible for payouts in the NFL's $1 billion settlement of brain injury claims. But the NFL uses a scoring algorithm on dementia testing that assumes Black men start with lower cognitive skills.

Crosstown tennis will continue Wednesday after girls matches were delayed. The boys finished though and Helena High got the win.

A Michigan State grad transfer announces his commitment to the Montana football team.

Judy Webb (Harris) and Tim Harris, far right, are pictured near the track between competitions at the 1967 Pan Am Wheelchair Games in Winnipeg, Manitoba.

Paralympic pioneers Tim and Judy Harris pose for a family photo with their four children. Back row, from left, Annie, Molly and John. Front row, Tim, Judy and Kate.