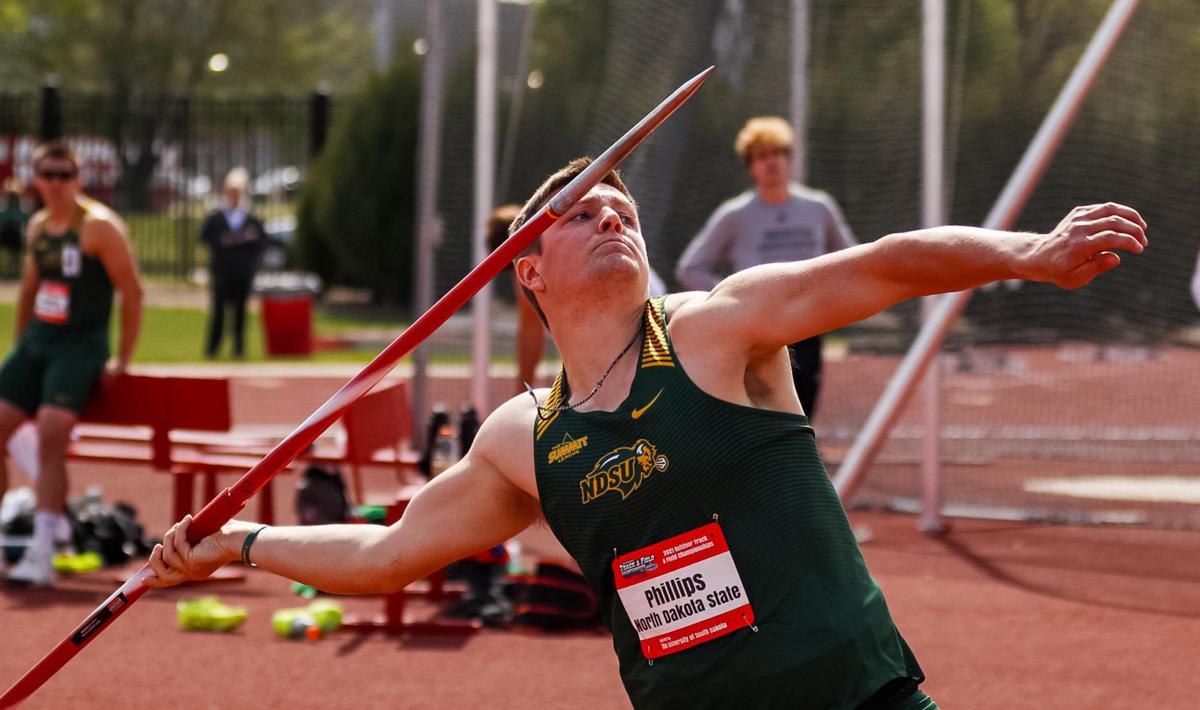 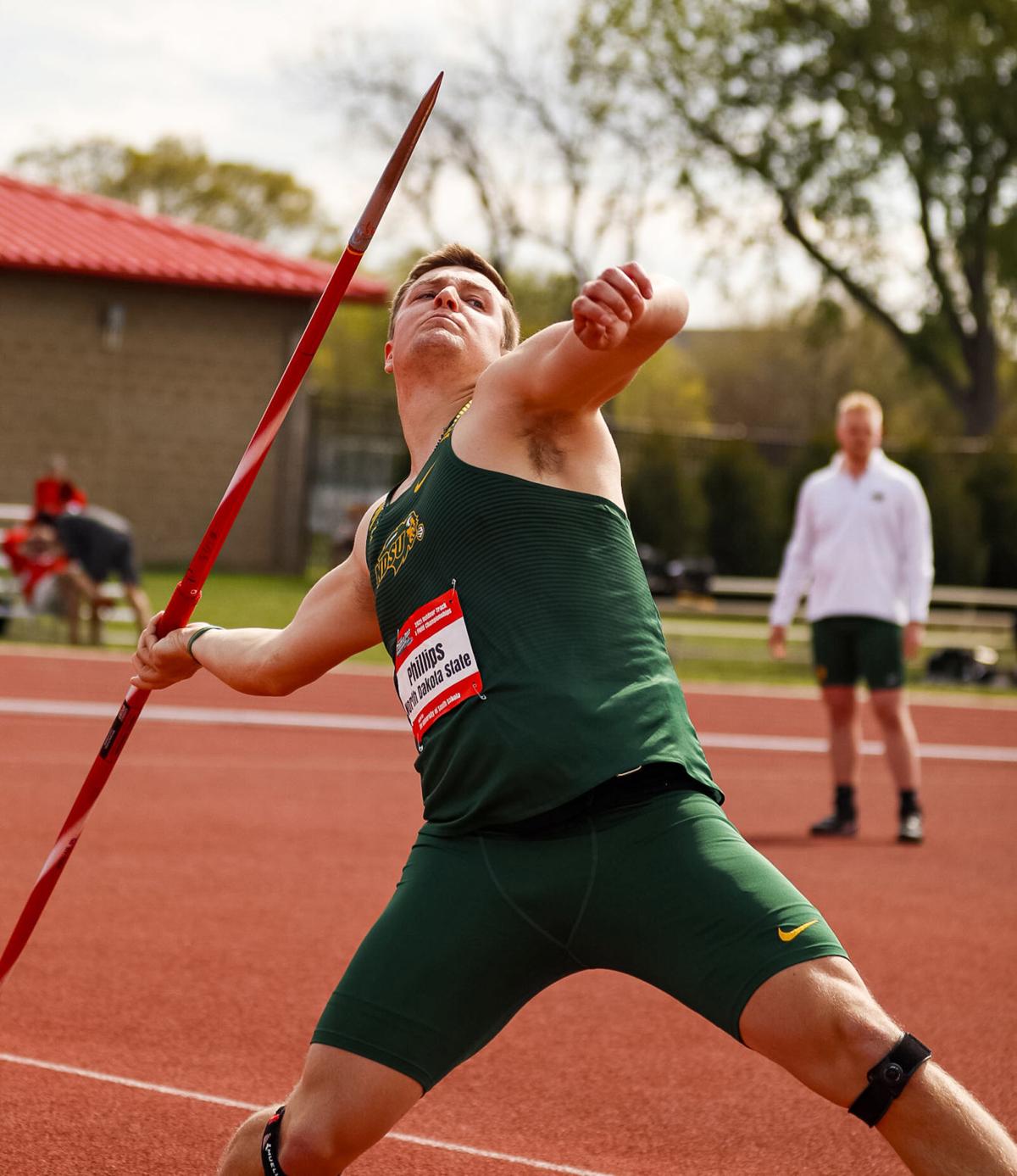 Javelin thrower Benji Phillips will compete this week at the U.S. Olympic track and field trials in Eugene, Oregon.

BILLINGS — He's been doing it since high school, but this season Benji Phillips feels like he’s actually gotten the hang of throwing the javelin. That feeling has resulted in a Summit League conference championship, a new personal best and a first-team All-America finish at the NCAA Outdoor Track and Field Championships last week.

The Glasgow High School graduate and current North Dakota State Bison will embark on his next challenge at the U.S. Olympic Team Trials in track and field on Saturday in Eugene, Oregon.

“More just excited than anything now. It’s such a good opportunity and one I’ve been dreaming about for a long time,” Phillips said this week as he prepared to leave from Fargo, North Dakota. “It’s a dream come true to be able to compete at this meet.”

When he first picked up a javelin in high school, he thought his collegiate path would maybe lead to playing football. But as he improved during his sophomore and junior seasons, he considered that maybe the javelin could be his future. Then in his senior year of high school, he won his second straight Class B title and ranked in the top 10 in the country, in spite of limited throws due to an elbow injury that he was still dealing with during his first season of collegiate competition at NDSU.

Phillips’ sophomore season for the Bison was cut off before it began because of COVID-19.

“We were probably two days, maybe one day away from leaving to go compete in our first meet when everything shut down,” Phillips said.

“Honestly in the long run it was probably a blessing in disguise. We were able to continue to technically advance and I did go back to Glasgow for the summer there, but was still able to iron out a couple things there and then come back. Continuing to get better and working on that led to some good results this year so I can’t say I’m too bummed about it.”

His 2021 conference championship winning throw of 75.27 meters (246 feet, 11 inches) in May was also just above the qualifying standard to get him into 24-athlete field at the Olympic Trials. In between, he finished fifth at the NCAA West Regional and eighth overall at the NCAA championships earning first-team All-America honors and the NCAA's Elite 90 award (given to the athlete with the highest GPA competing at each championship).

And it's all been building to this.

“It should be at least the biggest meet that I’ve ever been to so I’m just super excited and looking forward to that,” Phillips said.

His first goal he says is to make it to the second day of competition. Phillips will have three throws in the qualifying round at 3:15 p.m. Saturday. If any of those rank within the top nine marks, he will advance to the men’s javelin final on Monday.

“It’s a competition and I love competing so just have fun and enjoy the experience would be the next step goal,” Phillips said.

With his goal of an NCAA All-America finish already checked off the list this season, Phillips said he learned some things from competing at Hayward Field a week ago that he will bring with him into this meet.

“I’m usually not the one to get super nervous before things, but I kind of was a little bit before our NCAA meet there so it’s definitely something to keep in mind. It gave me a lot better idea of what to do pre-meet,” Phillips said. “Getting a feel for that was a really, really good thing going into this week.”

His parents, Tim and Yvette Phillips, were there to see him at NCAAs and will also be in attendance this week.

“You just kind of take a moment or two and think, ‘Wow. Is this really happening?’ This is just beyond, we just never expected we would be here. It’s not that we didn’t believe in him, it’s just the reality of it,” Tim Phillips said.

Tim and Yvette were both distance runners, and Tim is the Glasgow track coach. Even they didn’t expect how everything would turn out.

“You know if you’re dreaming about things, it’s never going to work out exactly how you think. We threw and threw and threw and threw millions of times, but never with a javelin. It was always having fun playing catch with a baseball or a football. We just had fun together,” Tim said. ”I always just encourage parents just to get out and have fun with their kids if you can. That to me was the biggest thing.”

NOTES: Toyota is sponsoring Good Luck Boulevard that athletes see in the staging areas before they compete. Fans can send good luck messages to athletes competing in the Olympic Trials at toyotagoodluckblvd.com ... There will be a livestream of men's javelin Saturday starting at 3:15 p.m. at nbcolympics.com. The television broadcast is scheduled to air on NBCSN from 6-8 and on NBC from 8-9.

Get the latest in your inbox!

We're delivering updates and highlights on the Summer Olympics daily to your inbox, including What to Watch, live coverage, schedules and medal counts.

Heading into her fourth Olympic Games, Hilary Knight is not ready to give up hockey

She was once the youngest, but at age 32, Hilary Knight, a veteran of three Olympic teams, is now the oldest player on the U.S. women’s ice hockey national team roster.

Javelin thrower Benji Phillips will compete this week at the U.S. Olympic track and field trials in Eugene, Oregon.