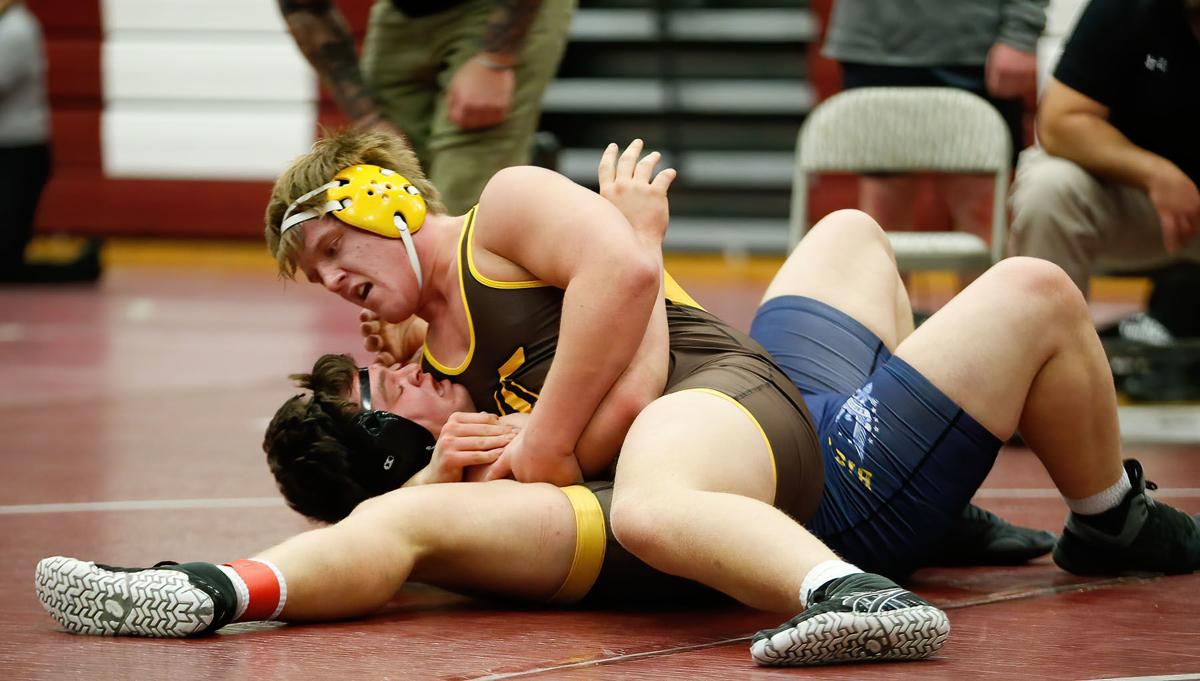 Josh Lee of Helena Capital wrestles an opponent at the Western AA seeding tournament. Lee, who was fifth at state last season, hopes to find the podium again this weekend in Billings at the All-Class State Tournament. 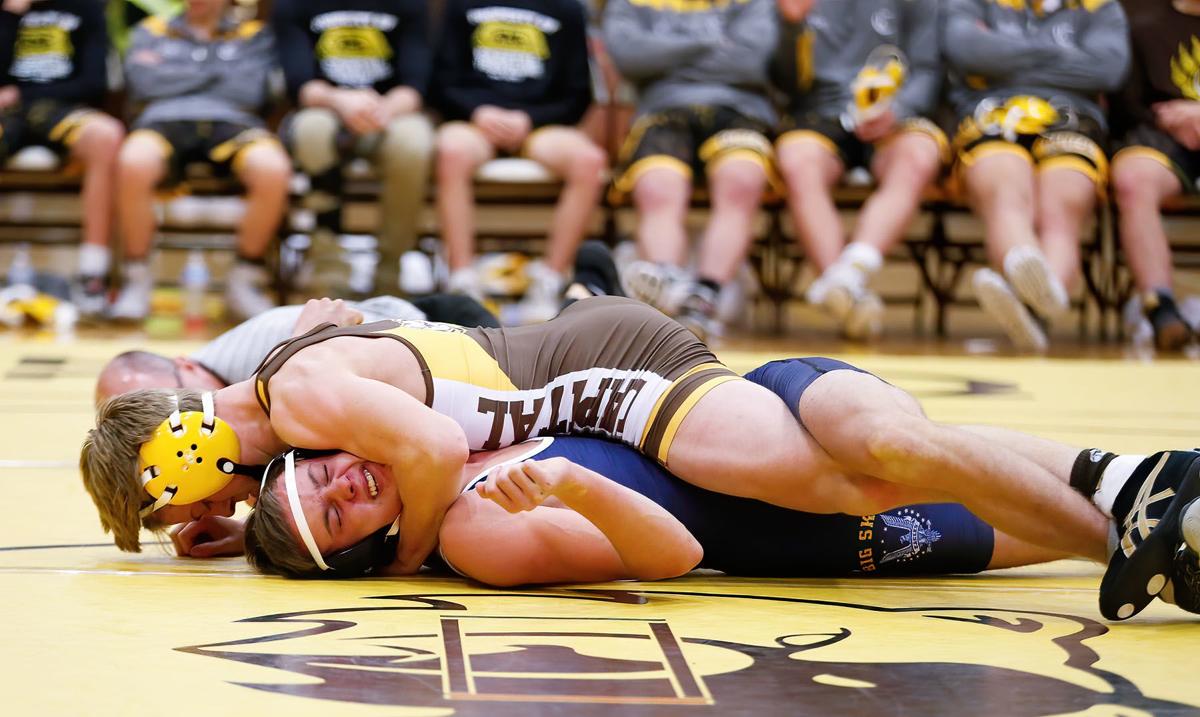 Helena Capital’s Carson DesRosier pins an opponent during a tournament back in December. DesRosier is aiming for a second state championship this weekend in Billings.

When it comes to wrestling in Montana or any high school sporting event, there is nothing like the All-Class State Tournament.

With thousands of fans, as well as hundreds of wrestlers, coaches and teams filling the First Interstate Arena at the Metra in Billings, it's a spectacle and this time around, Helena Capital is looking to make some history.

While the Bruins have certainly had success at the Class AA state tournament, they have never come away with a team trophy, which tops the list of goals this week for head coach Jeff Mahana.

"Never," Mahana said. "Never in school history have we won a trophy and so we told the kids, we have to win a trophy before we can talk about championships and right now, we are trying to get into the conversation of that third-place finish. A lot of things have to go our way, but we are peaking at the right time, and that's our goal. We want a top-three finish."

Yet, the Bruins did crown a state champion last season and that was freshman Carson DesRosier, who won the title at 120 pounds.

This year, DesRosier is wrestling at 132 pounds and went through the season with only one loss, which came at the Jug Beck to Avery Allen, the Eastern AA champion who could be standing in the way of DesRosier's second straight state championship Saturday night.

"I just keep trying to work hard and get better every single day," DesRosier said. "It's been a fun journey to go on with my teammates."

As a freshman, DesRosier was able to defeat Isaac Romero in the 120-pound final after Romero, of Helena High, had defeated DesRosier earlier in the season. If the Capital sophomore reaches finals night, he could have the chance to do the same against Allen, a freshman from Bozeman.

If DesRosier is successful, he will become the first Bruin to win back-to-back state titles as a freshman and sophomore, which will put him in a prime position to make a run at being a four-time champ, something the city of Helena has never had.

"We haven't had anyone win more than two at Capital," Mahana said. "So that would be a tremendous achievement."

DesRosier is one state title contender, yet he's not the only one for Capital, as 205-pound senior Zane McCormick enters as a top seed in his weight class after winning the Western AA title last week. Fellow senior Josh Lee, who was fifth last season, is also looking to find the podium in the heavyweight division.

And maybe ... just maybe, the not-so-heavyweight, can catch a few big guys off guard.

"I feel like a lot of people underestimate me because I am a lot smaller," Lee said. "I weigh about 224-226 pounds on average and I feel like that's where I get a little bit of an advantage."

This weekend, in a heavyweight bracket that features defending state champion Ethan DeRoche, as well as Western AA champion Kobe Moreno and 2019 finalist Tom Walkup, Lee will need every edge he can get.

"I feel really confident coming into this weekend," Lee said. "I feel like I am starting to peak and hoping I am can put up a good fight against (Ethan) DeRoche and some of the other big guys."

To keep up with teams like Great Falls High, Bozeman, Butte, Kalispell and Billings Senior, which all qualified more wrestlers for state than Capital, the Bruins formula is simple: bonus points.

"Our focus is going to be pin, pin, pin," Mahana said. "We are looking for those extra points and trying to be as aggressive as we can. We think we are in a good position to compete for a trophy and we will see what happens."

One grappler that should help accumulate bonus points is 182-pounder Noah Kovick (17-2), who is the top-ranked wrestler in his weight class and the favorite going in. However, with Peyton Morton (19-6) of Billings Senior, Jake D`Agostino of Bozeman (13-3) and Liam Swenson of Great Falls High in his weight class, reaching the finals and winning will be anything but easy.

"It's nice having the No. 1 seed and winning (divisionals)," Kovick said. "But state is the only thing that matters."

Kovick was third last season. DesRosier, Lee and McCormick are each looking to get back on the podium and some others that could join them are freshman Hunter Rahn (103), Conner Kovick (138) and Dylan Graham (152).

In the Class A tournament, Carlos Estrda will represent East Helena as the first-ever Vigilante wrestler to quality. He will face top-seeded Cooper Hoffman in his opening match Friday.

"He knows he can't hold anything back now. He has always been close and now, he believes it's his time." Capital coach Jeff Mahana.

The Brothers Kovick: Capital brothers Noah and Conner chase their mat dreams together

Wrestling isn't a sport for everybody. But from the moment Noah and Conner Kovick stepped onto the mat, it was a perfect fit.

Josh Lee of Helena Capital wrestles an opponent at the Western AA seeding tournament. Lee, who was fifth at state last season, hopes to find the podium again this weekend in Billings at the All-Class State Tournament.

Helena Capital’s Carson DesRosier pins an opponent during a tournament back in December. DesRosier is aiming for a second state championship this weekend in Billings.