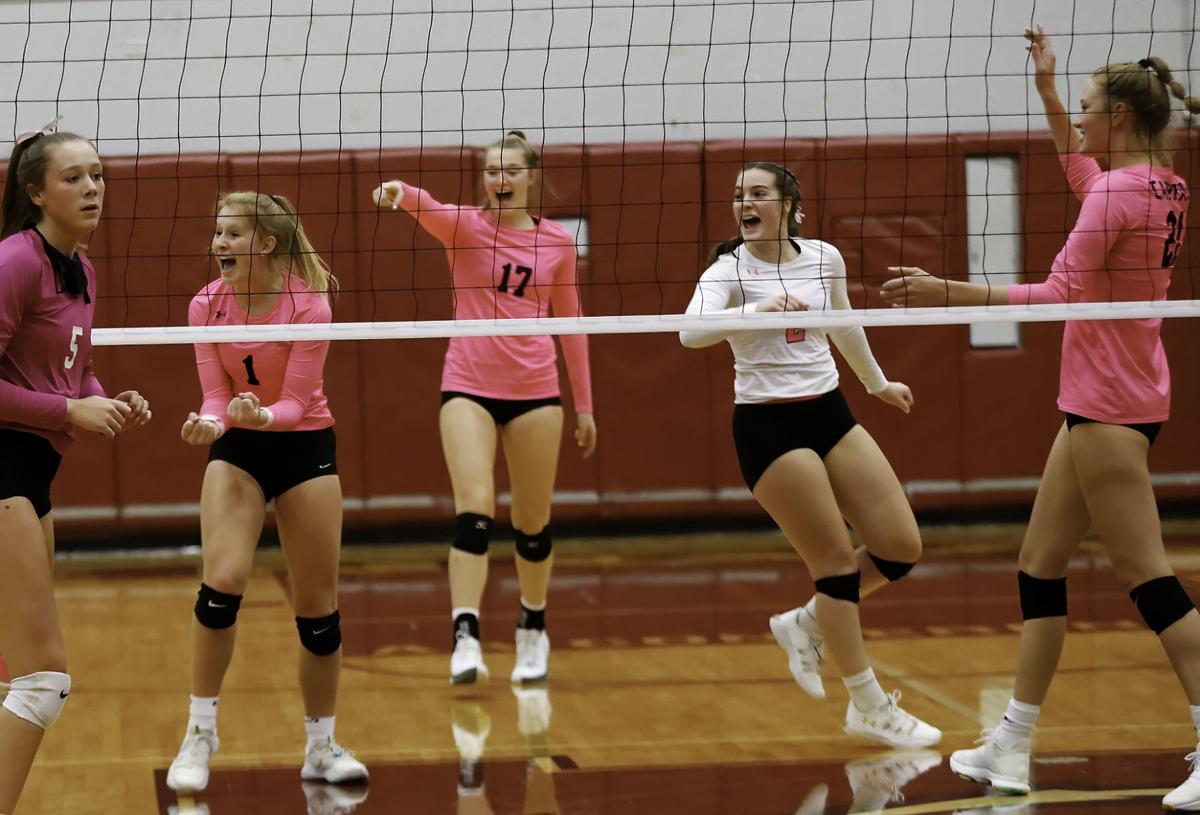 Capital players celebrate a point against Helena High Thursday night at the Jungle in a five-set win for the Bruins. 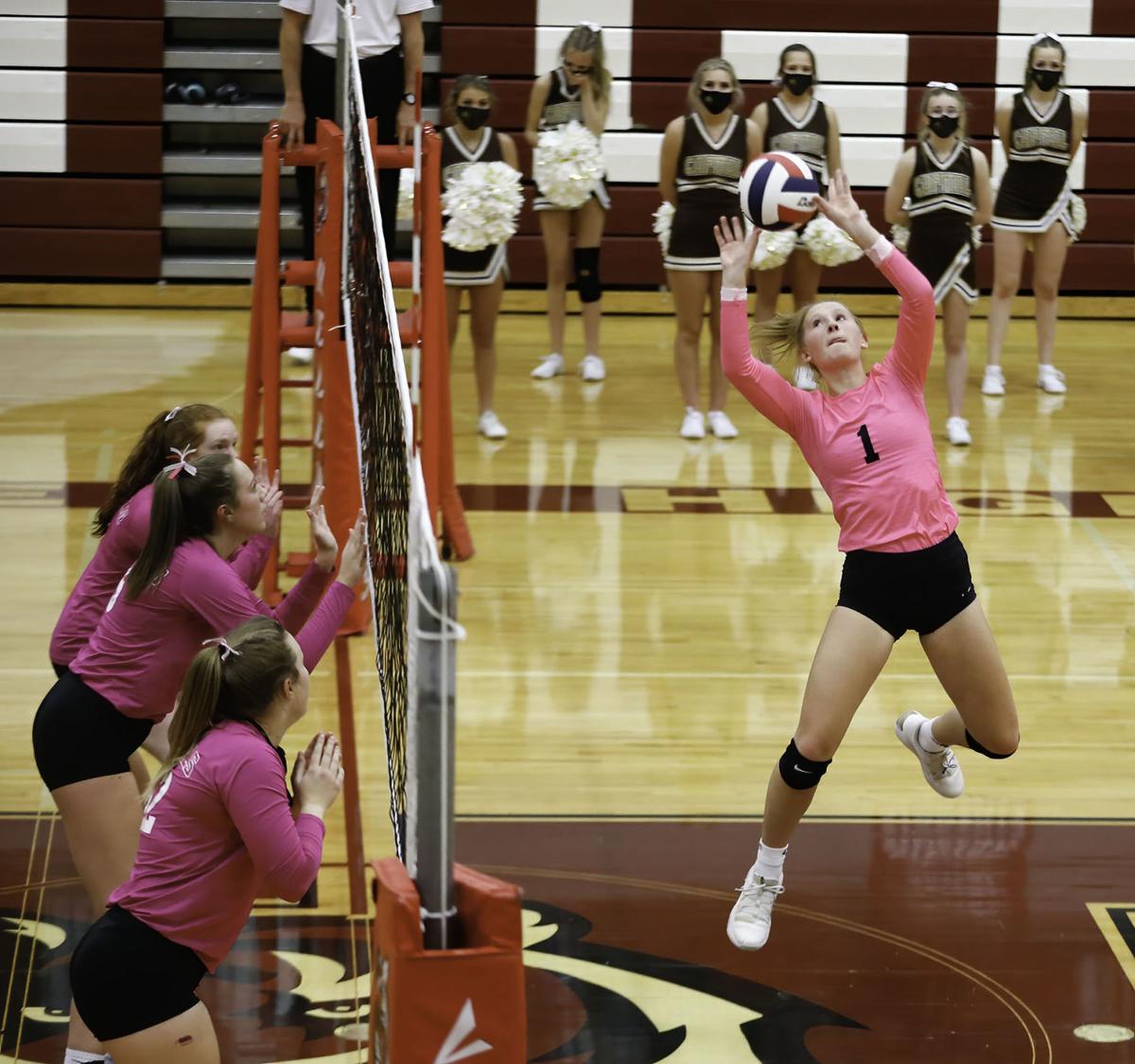 Audrey Hofer (1) sets the ball Thursday night at the Jungle in the win for the Bruins over crosstown rival Helena.

HELENA — The Helena Capital Bruins couldn't have been in a much tougher position that the one they found themselves in Thursday night.

The top-ranked volleyball team in Class AA was down 2-1 on the road, against their arch rival, third-ranked Helena High and the Bruins 63-match winning streak, appeared to be in jeopardy.

"Our captains, with their leadership, they really stepped up," Capital head coach Rebecca Cleveland said. "They stepped up throughout the match, but definitely in the fifth set, they said this is our game and started playing how we expect to play."

Following some unexpected delays at the start of the match, including a fire alarm that went off during warmups, the Bruins established control early and grabbed a 1-0 lead after the 25-16 win and it looked like Helena might get swept like in the first meeting at the Bears Den.

But in the second set, things started shifting towards the Bengals. Helena tied the game at 8-8 and then behind some kills by Liz Heuiser, it was able to grab the lead and held on for the 25-23 win.

In the third, Capital again grabbed a 9-5 lead, but a kill from Lauren Heuiser trimmed the deficit. Eventually, a kill by Liz put the Bengals ahead 19-18. A block later in the set by the senior made it match point. Aubrie Christman then hit home an ace to give Helena 25-22 win and the 2-1 lead.

"I couldn't be more proud of them for how they played in sets one, two and three," Helena head coach Lindsey Day said. "The feistiness, the grit and the fight that they showed was awesome and it was a way different feel from the first crosstown and that's definitely a positive takeaway from the match."

After not getting pushed to five sets at all during the 2019 season, the Bruins needed to win game four just to get there and that's when they turned to the Bartsch wins and Hofer to get things back on track.

Capital jumped out to a 7-2 lead. Then, consecutive kills from Paige Bartsch made it 11-6, before a kill from Dani pushed the Capital lead to 16-6.

But Helena, sensing the upset, responded with an 11-2 run and got within one (18-17) on a kill from Liz Heuiser. Yet, a block from Paige Bartsch flipped the momentum again and a key kill late from Parklyn Heller helped Capital win the set 25-19, forcing a fifth game.

"Getting back to swinging aggressive and getting better passes on serve-receive sure helped," Cleveland said. "Parklyn Heller did a hell of a job of getting her timing down on her swing and defensively, our team played really well."

In the penultimate set, the Bruins grabbed an early lead and kills from both Bartsch sisters put Capital in control before it took the 15-6 victory, as well as the 64th consecutive win overall, one shy of a Class AA record.

"How they finished, they're creating a memory," Cleveland said. "Our seniors and even the girls in the stands will remember tonight."

The Bartsch twins added another stellar performance to their resume in the rivalry as Paige finished with 23 kills and six blocks, while Dani pitched in with 21 kills and four aces. Audrey Hofer also managed 46 assists and 12 digs, which was tied for a team-high with Kennedy Pocha.

"That was pretty intense," Paige Bartsch said. "That was probably the most fun crosstown match that we've had. We struggled for a bit, but we were able to turn it around."

"To get our team going we needed to get some big kills," she said. "I tried to do that for my team and the rest of my team did a great job of that too."

Liz Heuiser was outstanding in defeat for the Bengals with 19 kills, a match-high nine blocks and 12 digs. Christman added five aces for the Bengals, Brooke Ark had 21 digs and two aces, while Kim Feller also contributed with 19 assists.

The Bruins tied Billings Senior with their 65th straight win Friday, which is a Class AA record they now share with the Broncs.

The Bengals dismantled the Bravettes

Helena Capital is going to win No. 64, which is one shy of the Class AA record and rival Helena High is hoping to stand in the way Thursday night.

Helena Capital thought it was going to set a Class AA record for consecutive wins Tuesday night. But it turns out, the Bruins only tied it after further review.

Check out the weekly poll.

Check out the weekly poll.

Capital players celebrate a point against Helena High Thursday night at the Jungle in a five-set win for the Bruins.

Audrey Hofer (1) sets the ball Thursday night at the Jungle in the win for the Bruins over crosstown rival Helena.