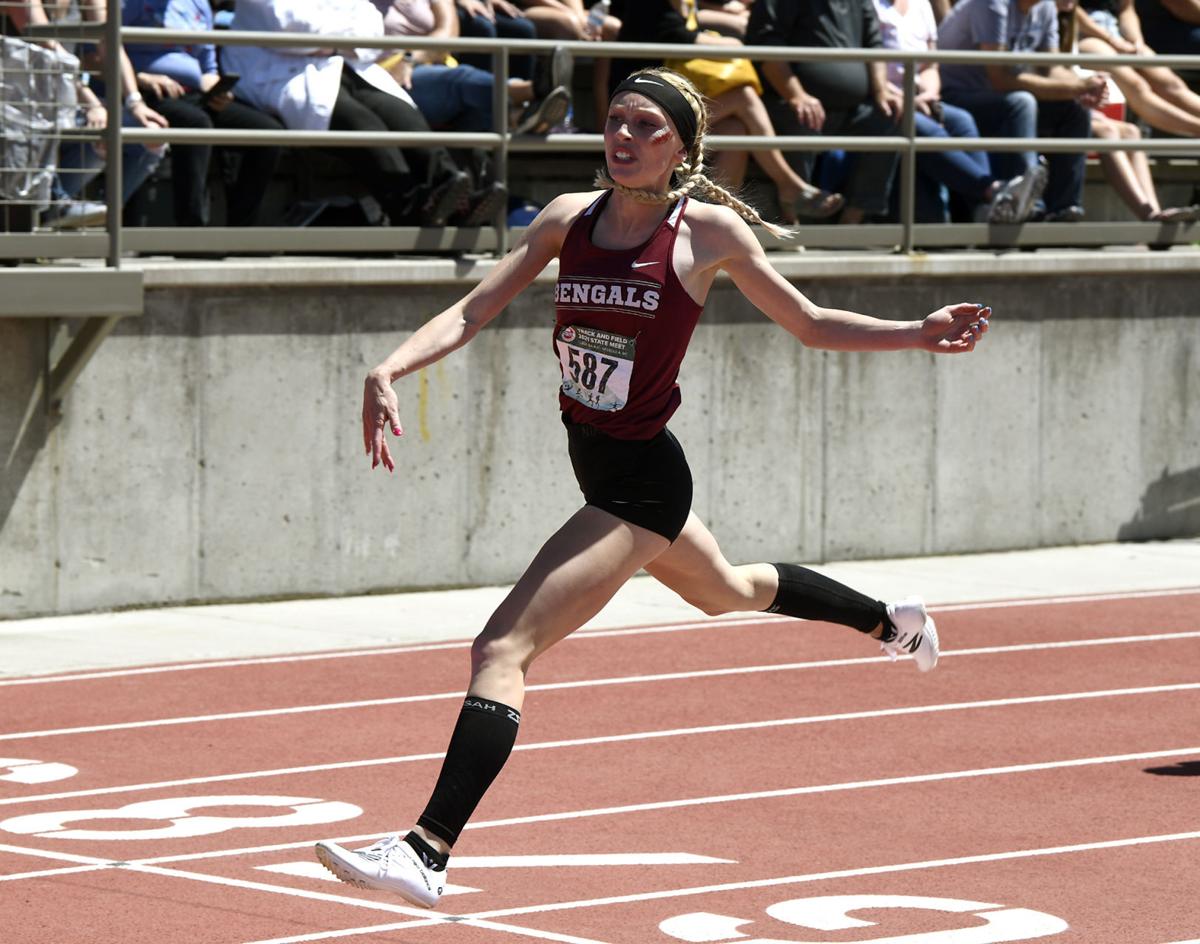 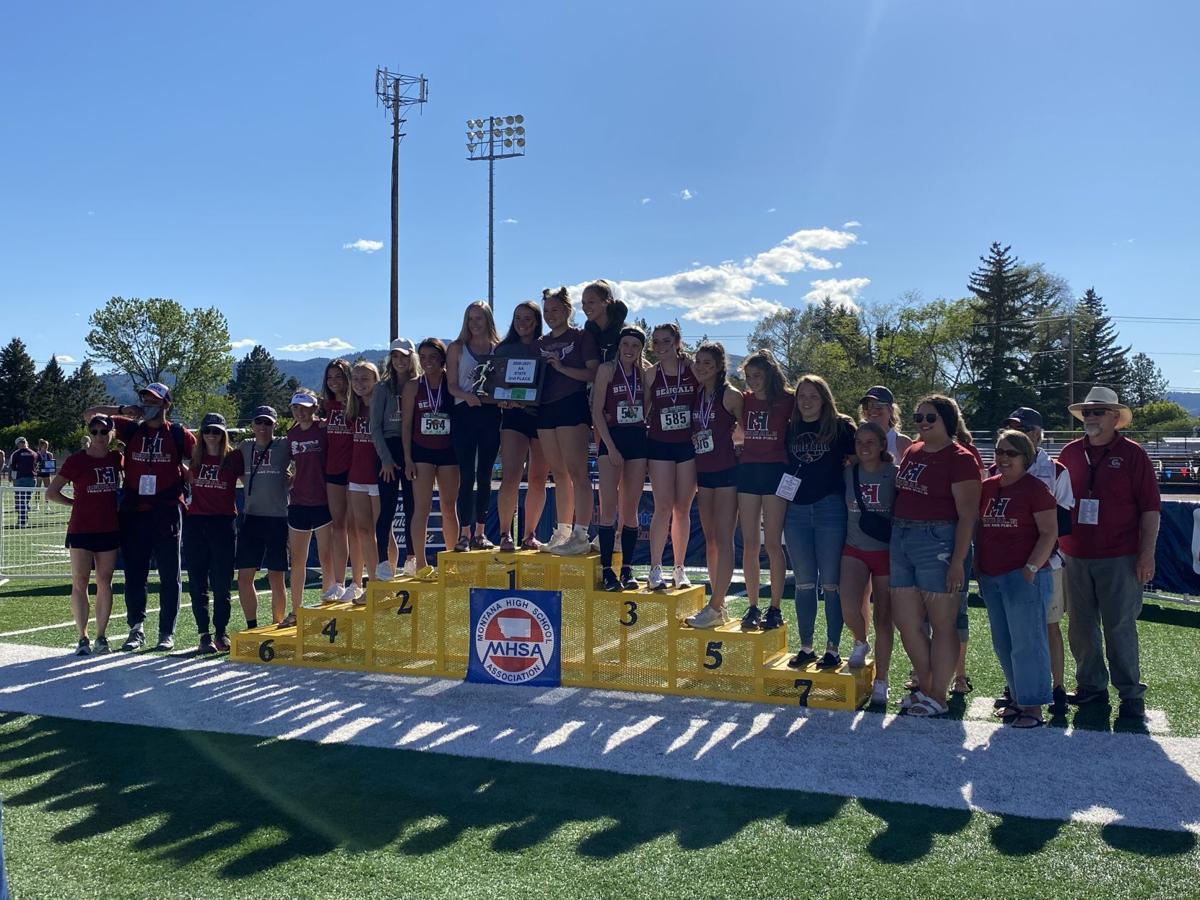 HELENA — Winning three state championships, specifically the 200, 400 and 800-meter runs, isn’t something that happens often. In Class AA girls track, it’s been 17 years and at least until Helena’s Odessa Zentz completed the feat Saturday in Missoula, it had only happened two other times.

With relays included, Lewis has eight-career state titles, which is the overall record. But Zentz, has more won individual events than any other girl in Helena High track history and did so without a sophomore season due to the COVID-19 pandemic.

“It just felt really special to get a third one,” Zentz said of her win in the 200 and her third individual title of the weekend. “I went into that race, not knowing what was going to happen. Yesterday, I didn’t really get in with a good time and I wasn’t the first seed. I just love the 200 because it’s so fun to do.”

Odessa may have run the 200 for fun in the past, but this year, she got serious about winning it and even surprised herself on Saturday.

Helena High head coach and her father, Jesse Zentz, had this to say:

“Odessa really was inspiring to watch this weekend and definitely left her mark on the 2021 season. She had a target on her back in all three of her events and exhibited such poise. Only a couple of athletes have won those three events at a single state meet in the past two decades, so it was a huge undertaking. She wouldn’t have done it without incredible teammates supporting her and pushing her throughout the season.”

Thanks in part to the three wins from Zentz, Helena High was able to take second behind Missoula Sentinel, which finished with 91 points. The Bengals had 73, although one Sentinel athlete was entered in too many events at the Western AA Divisional, leading to a lawsuit and an injunction filed Friday that allowed the Sentinel athlete to compete this weekend, while the issue is sorted out at a hearing in June.

“I am so proud of each and every one of our girls,” Jesse Zentz said. “They all played a role in this trophy. Every point mattered and the future is incredibly bright for them and their program. When I watched them all celebrating together, I saw a lot of love for one another and this sport. I just had to stand there in awe of what they accomplished.”

While Zentz played a huge role in Helena’s second-place finish as a team, she was far from alone in finding her way onto the podium.

A number of her teammates placed on Friday, including Carly Ryan, Aubrie Christman and Logan Todorovich, who each notched top-three finishes.

On Saturday, Todorovich, who appears to be the next great Helena track athlete, notched a third-place finish in the 100-meter hurdles and also took sixth in the 100. She also finished second on the team with four total medals in the 100, 100 hurdles, high jump and 400-meter relay.

The Bengals were also aided in their quest for second place by finishing runner-up in the 1,600-meter relay as the team of Zentz, Ryan, Kendyll Sommers and Kylie Hartnett ran a time of 4:00.85.

As far as the Helena boys, they didn’t win a team trophy, but put more guys on the podium. Josh Goleman took fourth in the discus, one day after winning a state title in the shot put. The 1,600 relay team of Trystan Brewer, Dallin Christensen, Chase McGurran and Colter Petre also took fifth. Marcus Evans was also sixth in the javelin.

The Bruins finished with 56.5 points, which was just outside the top three. The Bruins had a number of podium finishes Friday and added to that Saturday as Amanda Haab finished second in the discus. Freshman Kathryn Sheridan also stood out taking second in the 100-meter hurdles and third in the 300 hurdles, as well as fifth in the 200.

Sheridan was also part of the 400 and 1,600 relay teams that placed, giving her a total of five medals or one for each event she entered.

On the boys side of things, Dylan Cunningham took second in the discus. Helena High was 10th in boys competition with 18 points. Capital was 11th with 16. Sentinel won the championship.

The Vigilantes traveled to Billings this weekend for their first-ever Class A state track appearance and East Helena’s Moasas George became the first track and field athlete to place at a state meet. The sophomore ran a 16.20 in the 110-meter hurdles, a personal-best, to take fourth.

Lindsay Rossmiller of 406mtsports.com contributed to this report