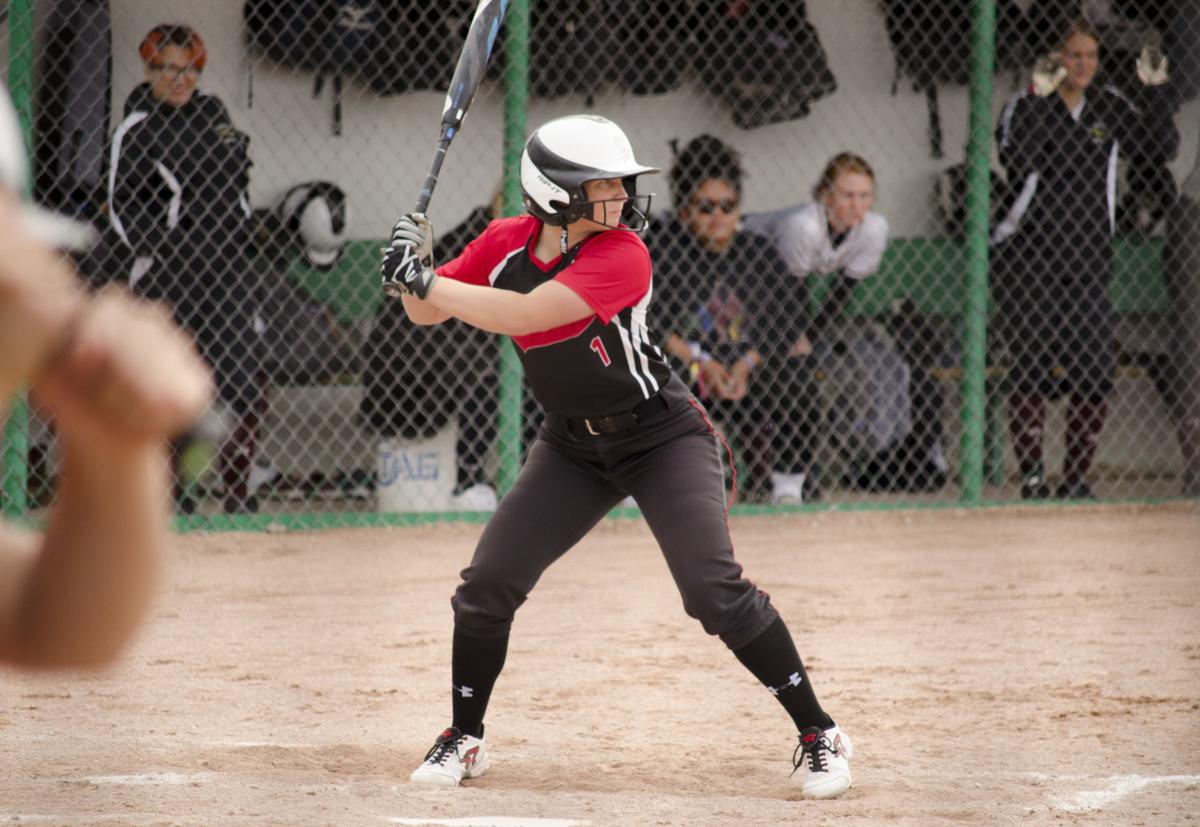 Huntley Project's Sara Sumner watches for the pitch during their second-round game against Florence May 24, 2019 at the state B-C softball tournament in Belgrade. 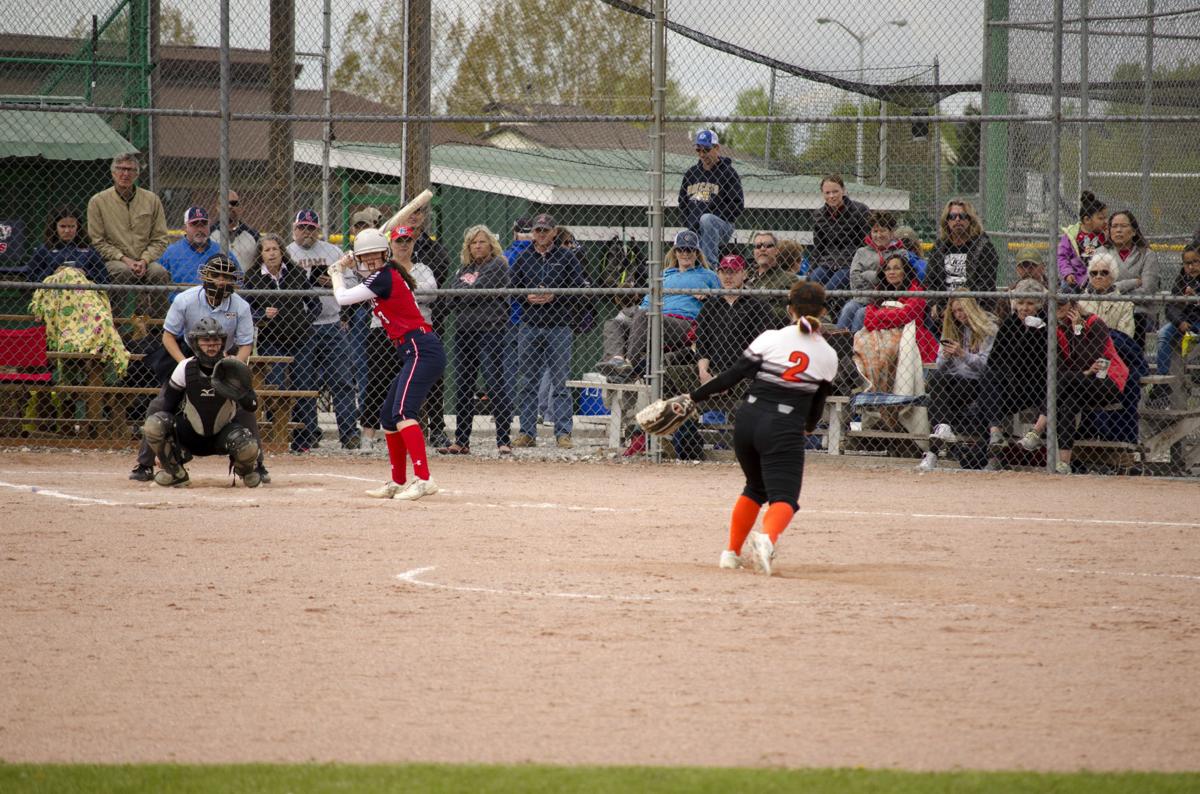 Plains-Hot Springs' Kassidy Kinzie pitches against Missoula Loyola in the sixth inning of their second-round game of the state B-C softball tournament May 24, 2019 in Belgrade. 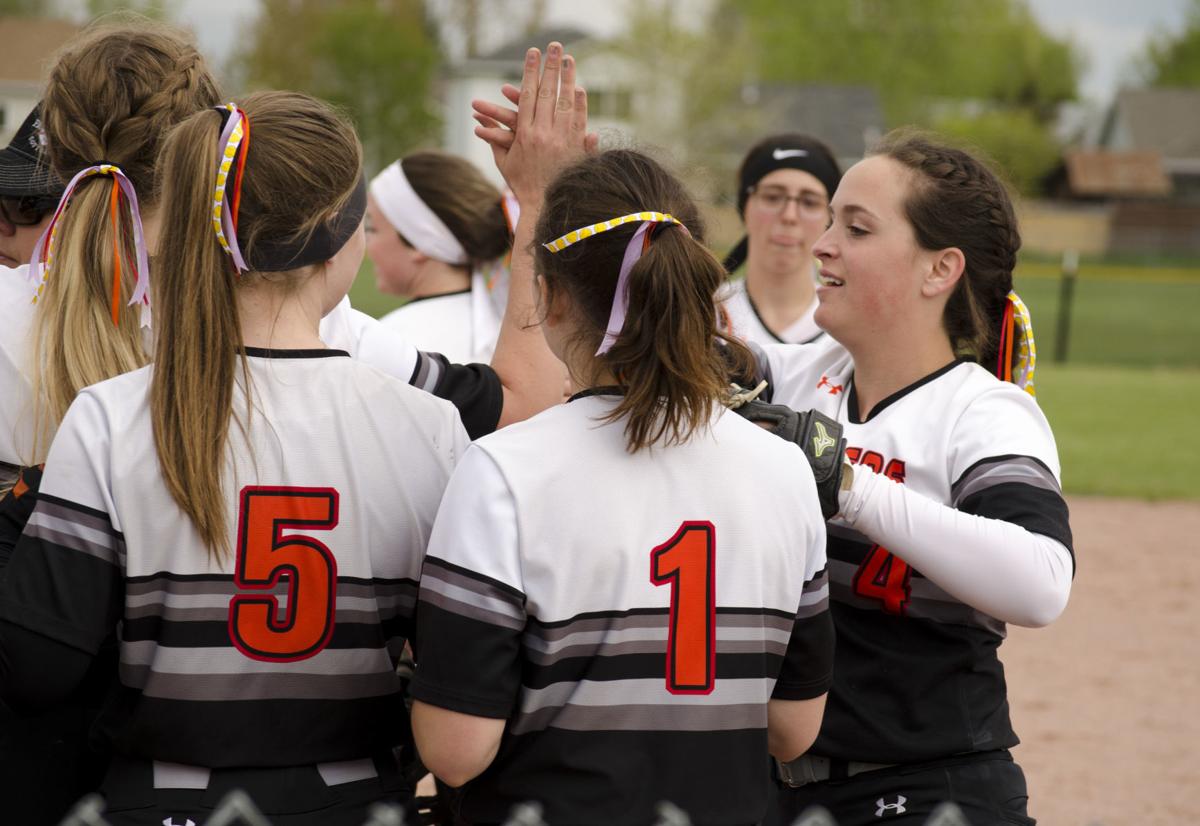 The Trotters exchange high fives between innings during their 1-0 win over Missoula Loyola in their second-round game May 24, 2019 at the state B-C softball tournament in Belgrade. 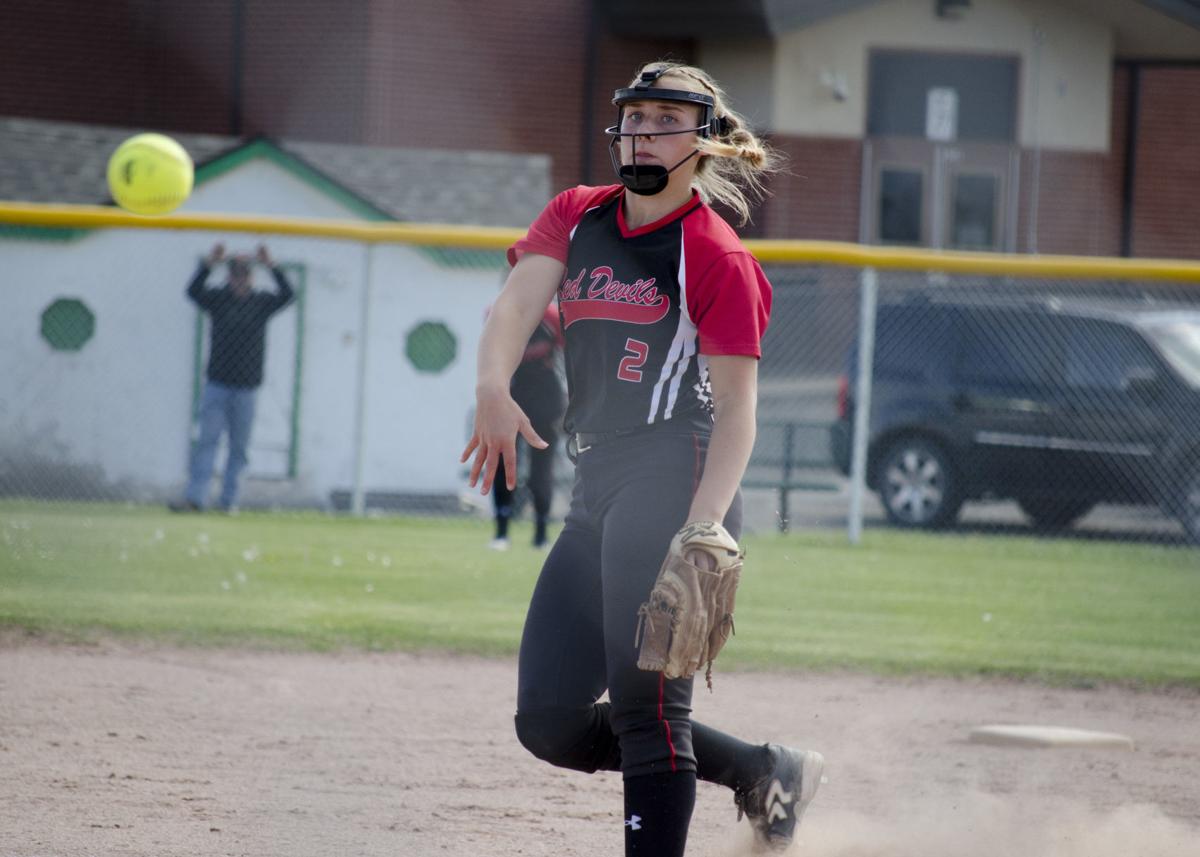 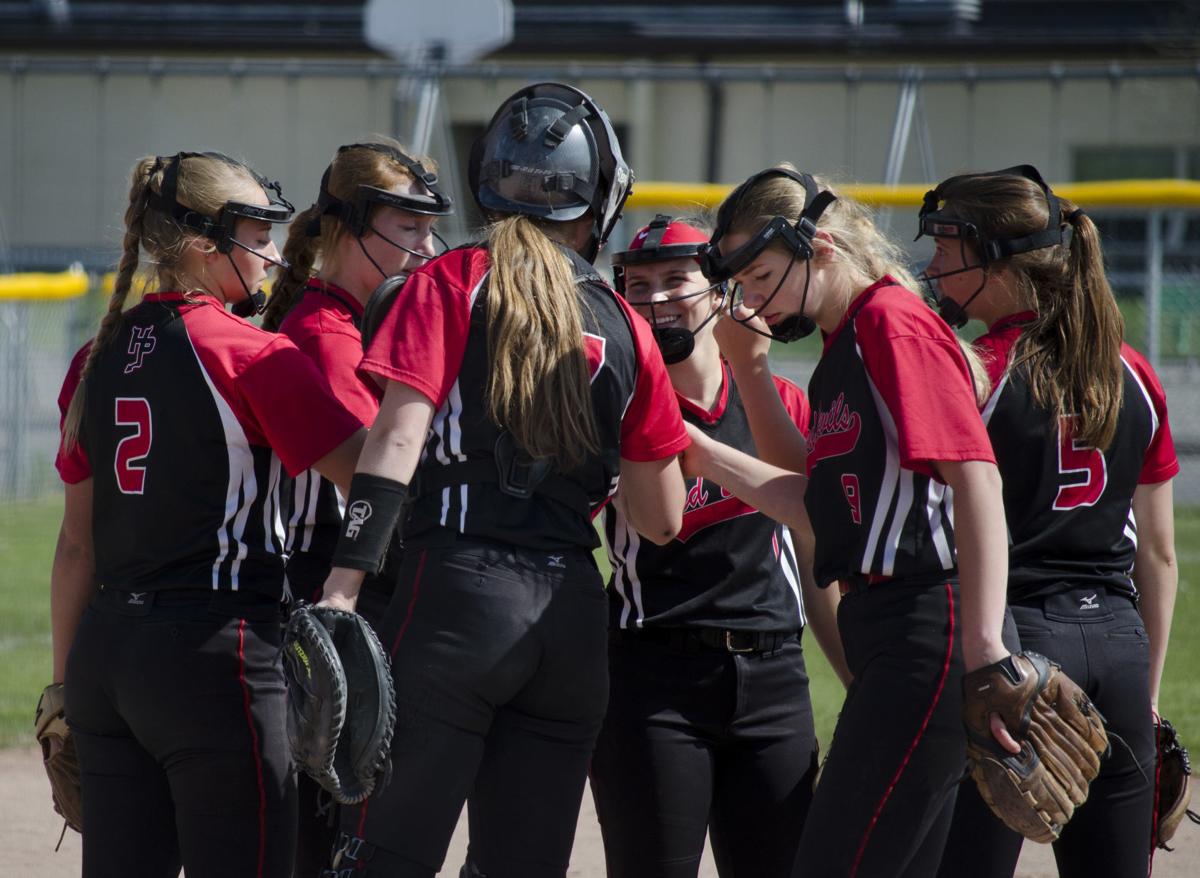 Huntley Project huddles during their 1-0 win against Plains-Hot Springs at the state B-C softball tournament Friday 2019 in Belgrade. 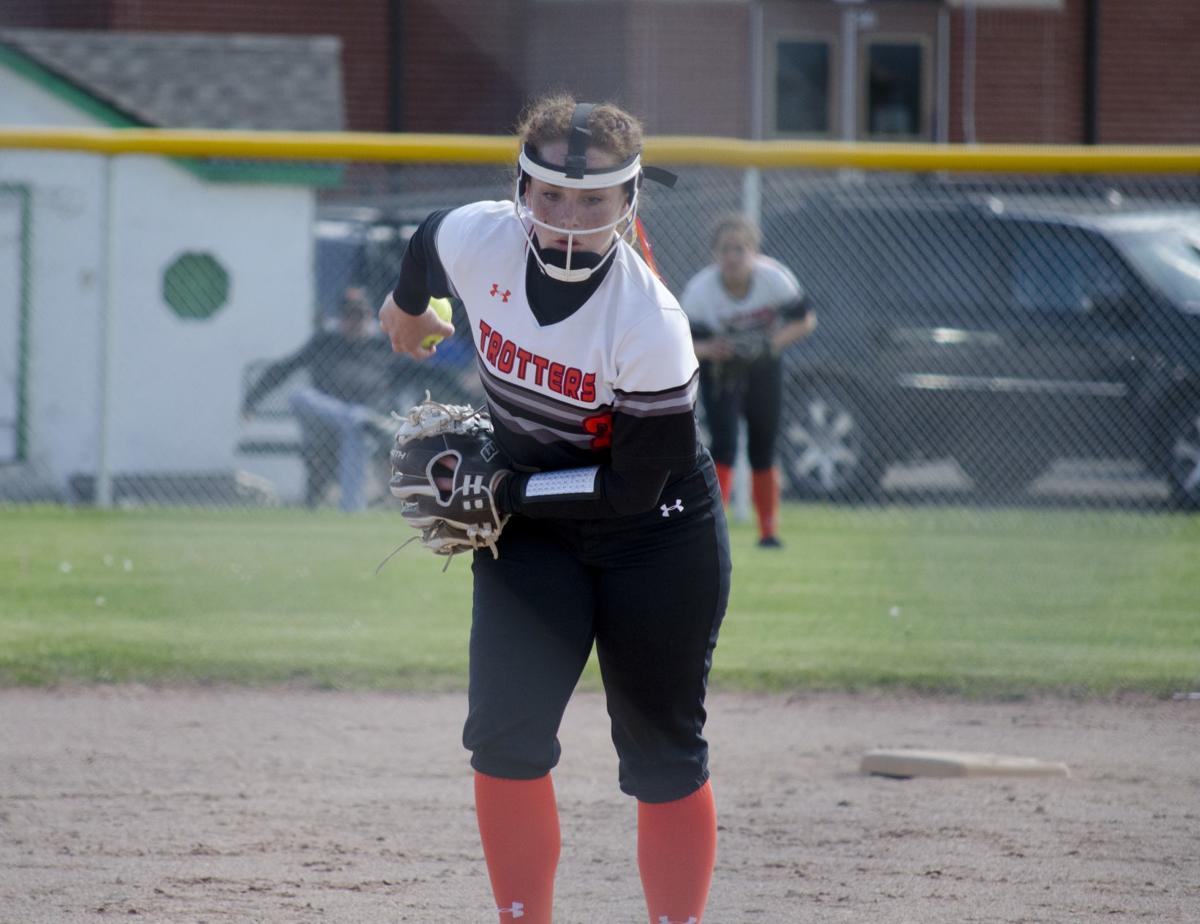 BELGRADE — Huntley Project worked its way through the competition to earn its place in the B-C softball championship game Friday by defeating the other two teams still standing, Plains-Hot Springs and Florence-Carlton.

The Red Devils held off the Trotters 1-0 in the afternoon’s undefeated second round while the Falcons had to play their way back through the day, including a 10-9 win in the fourth place game over rival Missoula Loyola.

Plains-Hot Springs and Florence-Carlton will play Saturday morning at 9 a.m. to decide third place. Huntley Project awaits the winner of that game in the championship.

Just hours after handing top-seeded Missoula Loyola a 1-0 loss, the Trotters found themselves on the other side of the same score.

“Our defense today was unbelievable. We made some solid plays all day long,” Plains coach Michele Bangen said. “Our hitting – we’ve got to hit. You can’t win two games only scoring one run.”

The Red Devils jumped out to the lead in the first inning with an RBI from Mollee Krum and then spent the rest of the game playing defense.

“Having that one point all game long gave us stress so we had to stay more positive in that aspect of the game,” Huntley Project junior pitcher Addy Hultgren said.

As it came down to the final batters and with the Trotters chanting from the dugout, “We want it!” to try to get a hit, Hultgren did what she’s done all tournament.

On a full count with the pressure to send them to the championship, Hultgren earned her 17th strikeout of the game. She’s struck out 36 batters in the Red Devils’ three games during the tournament.

FINAL: This one ends the way it’s gone all day. @HPREDDEVILS Addy Hultgren gets the final strike out with a full count to send the Red Devils to the championship for the 3rd year in a row. They defeat Plains-Hot Springs 1-0. #mtscores pic.twitter.com/S7qhzFq7Kc

Hultgren said she tried not to think about the pressure and instead tried to focus her anger about herself striking out into throwing strikes.

But while she and senior catcher Kasey Jones admitted feeling some of the pressure after, they began the game loose after listening to some of their “pump up jams” on the bus beforehand, just as they had before their morning win over Florence-Carlton.

“That’s our thing. I don’t know why it is,” Hultgren said. “We just really find joy in the music and it gives us good attitudes.”

Both displayed solid play throughout the day and helped their teammates by continuing solid play as the sun broke through the clouds.

“We’ve found that if we stand up at the fence in the dugout and really cheer ourselves on and the team, we do a lot better,” Jones said.

“We didn’t want to play in the rain so when it went away we kind of got a little happier,” Hultgren said.

And under the sunshine, they found their way to the championship for the second consecutive year and third time in the past four.

“Having that win this morning meant everything having the pressure off of our shoulders and getting this game tonight so we can just go straight into the championship – last year we lost in the morning so we had to fight our whole way back – and I think that was really nice for us to win these games,” Hulgren said.

Plains-Hot Springs will have to take the long way around, one that goes through the two-time defending champions in Florence, if the Trotters want a rematch with the Red Devils.

“We’re one of those teams that usually hit one day and not the next so we’re hoping tomorrow is our day to hit,” Bangen said.

Florence had a hard time getting their bats going in their first game of the day against Huntley Project, but ironed out those kinks by the second and third games of the day.

They defeated Cut Bank 20-8 in five innings, including a 10-run fifth to advance to face familiar rival Missoula Loyola in a win-or-go-home game.

The Falcons turned around and opened their game with a six-run first inning against the Breakers.

But in the second inning, the Breakers answered with five runs of their own.

Both teams remained scoreless until Dani Zahn hit a grand slam in the bottom of the sixth to push their runs to 10.

Took me a few tries, but I learned to record when Dani Zahn comes up.
Right before she hit this the dugout was yelling “Let’s go for No. 4 today!” She took this on the first pitch.

“I knew they were right at the heart of their order coming into the seventh so I wanted a few more,” Florence-Carlton coach Rob Ralls said. “I would have been happy with a couple, but I’ll take a grand slam.”

Loyola answered back in the seventh with four runs, but senior Shannon Byrne, one of four pitchers the Falcons used throughout the day, struck out the final two batters to give them a chance to continue to play their way through and earn a chance to defend their state title.

“I think it’s just going up to the box, just relaxing and just seeing the ball I guess. It’s not really that complicated,” Zahn said after. “I also think it’s just your teammates get behind you and that’s a big motivator and especially after you already hit one, you’re already feeling good. I honestly wasn’t expecting the second one, but it felt good.”

After dropping their morning game to Plains-Hot Springs, Missoula Loyola had to defeat Conrad-Choteau 4-2 to advance to the fourth-place game and just weren’t able to fully replicate the success they had had against the Falcons last week in the divisional. McKenna Bessette led the Breakers with six RBIs and Carly Tipp had three.

In the 7th Loyola’s Carly Tipp hits a home run of her own. Breakers trail Florence 9-10 with 1 out and the wind coming up. #mtscores pic.twitter.com/yfy8Snt4xi

Zahn described their divisional loss as “heart wrenching” and the rivalry wasn’t lost on the Falcons as they faced each other in an elimination scenario with both teams imploring their rosters in huddles to want it more and to keep going.

“If we would have lost, it would have been our last loss to Loyola our senior year so we really didn’t want that so that was a big motivator,” Zahn said after.

Byrne came in with bases loaded for the second time Friday to finish out one of the highest stakes games they played this season with 15 strikeouts in five innings.

“Like I said, teams win championships, individuals win awards so the team played extremely well. I mean you can see Shannon’s big brace and you can see she’s beat up, but she’s got an arm. Hopefully we can win three tomorrow,” Ralls said.

The two-time defending champions will play Plains-Hot Springs for a chance to advance back to the championship where Huntley Project awaits.

Huntley Project senior catcher Kasey Jones hit a three-run home run in the first inning to give the Red Devils a 3-0 lead until Florence’s Danielle Zahn hit a home run of her own in the fourth.

Florence added another run in the fifth and the Huntley Project defense began to stall a bit, but again Jones stepped up to provide another spark in the seventh as she ran in from third.

T6: Kasey Jones gets the play at the plate to put @HPREDDEVILS up 7-2 over Florence #mtscores pic.twitter.com/xMukd2XXxf

“And then she comes around and head first slides,” Huntley Project coach Tim Bastian said with a laugh. “It was kind of the cherry on top.

“You can do so much up until game day and then it’s up to the girls to perform and enjoy the day.”

Plains-Hot Springs coach Michele Bangen told her team they were going to come out aggressive on the base running. She wasn’t kidding and went to a play her dad had taught her in the first inning.

In the first inning, Sydney Jackson hit a lead-off double and then Natalie Deschamps bunted to get her to third. Missoula Loyola pitcher McKenna Bessette struck out Sage Jackson, but walked Kassidy Kinzie.

“I looked at Sydney and said, ‘We’re stealing home. You’re going to get it done,” Bangen said.

Jackson snuck in for the lone score of the game and then the third-seed from the west Trotters held the top-seeded Breakers, who had put up 13 enroute to run-ruling Cut Bank in the first round, to 0 through all seven innings.

“Kass threw an amazing game for us, but my defense stood behind her,” Bangen said. “My outfield was strong and tough and just stayed solid so it was great."

FINAL: Plains with the final out here and they win 1-0 over Loyola to make it to the undefeated semifinal with at the very least a chance to play for 3rd. #mtscores pic.twitter.com/XBuJ8WbQsL

Photos from May 24, 2019 at the state B-C softball tournament in Belgrade.

Huntley Project's Sara Sumner watches for the pitch during their second-round game against Florence May 24, 2019 at the state B-C softball tournament in Belgrade.

Plains-Hot Springs' Kassidy Kinzie pitches against Missoula Loyola in the sixth inning of their second-round game of the state B-C softball tournament May 24, 2019 in Belgrade.

The Trotters exchange high fives between innings during their 1-0 win over Missoula Loyola in their second-round game May 24, 2019 at the state B-C softball tournament in Belgrade.

Huntley Project huddles during their 1-0 win against Plains-Hot Springs at the state B-C softball tournament Friday 2019 in Belgrade.