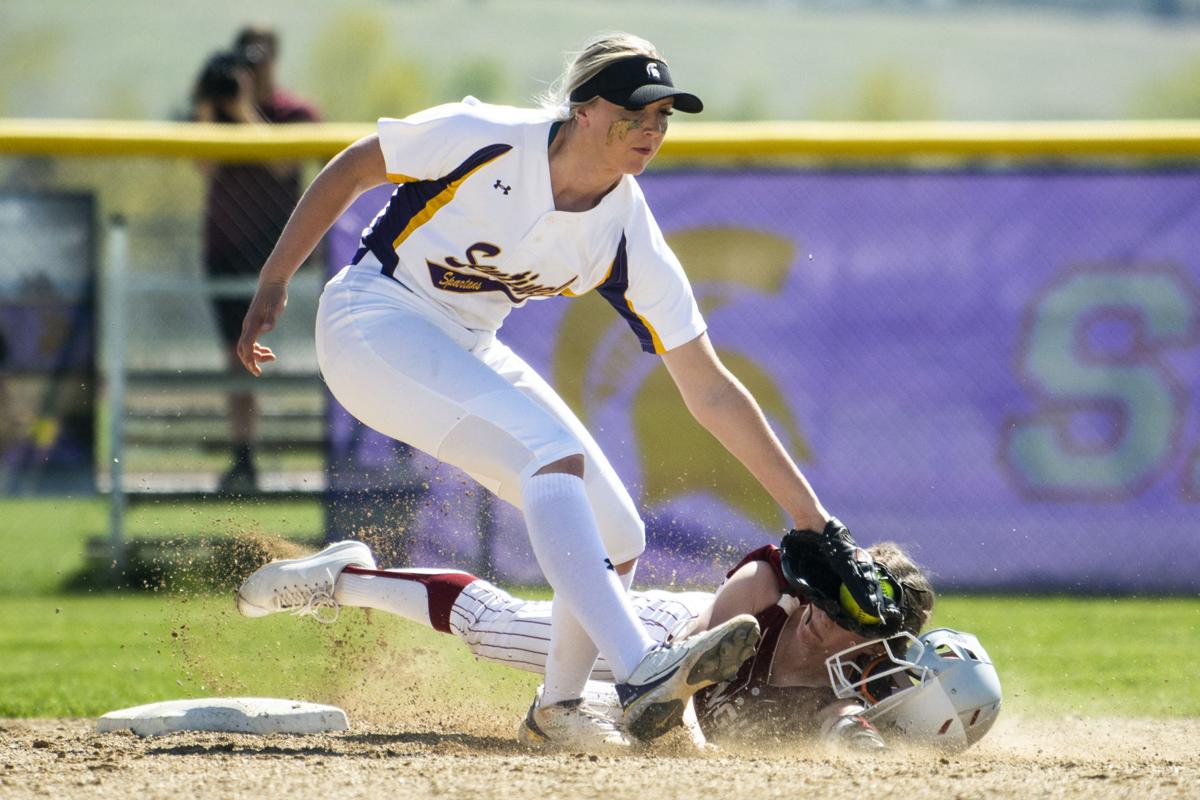 Missoula Sentinel’s Grace Hardy tags out a Helena runner attempting to steal second base during their softball game earlier this season. 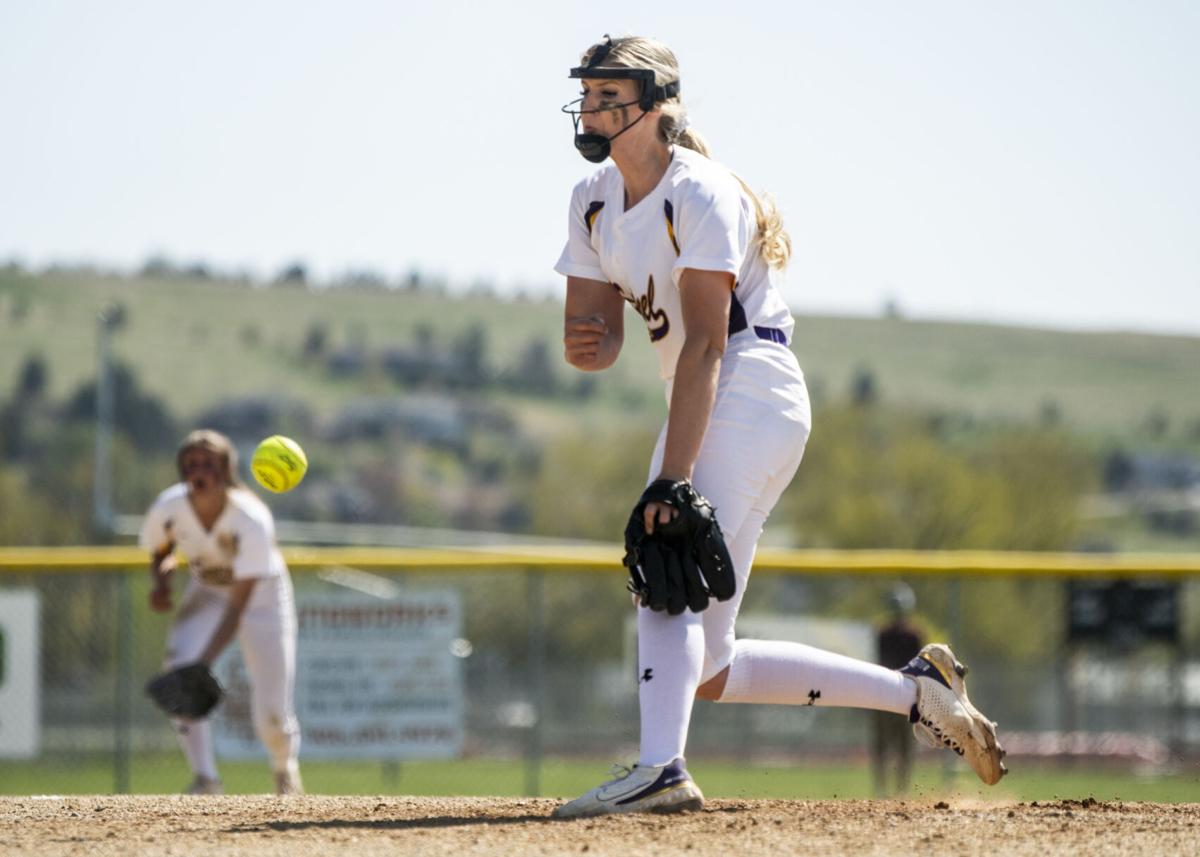 Sentinel pitcher Grace Hardy delivers from the mound during their softball game at Sentinel. 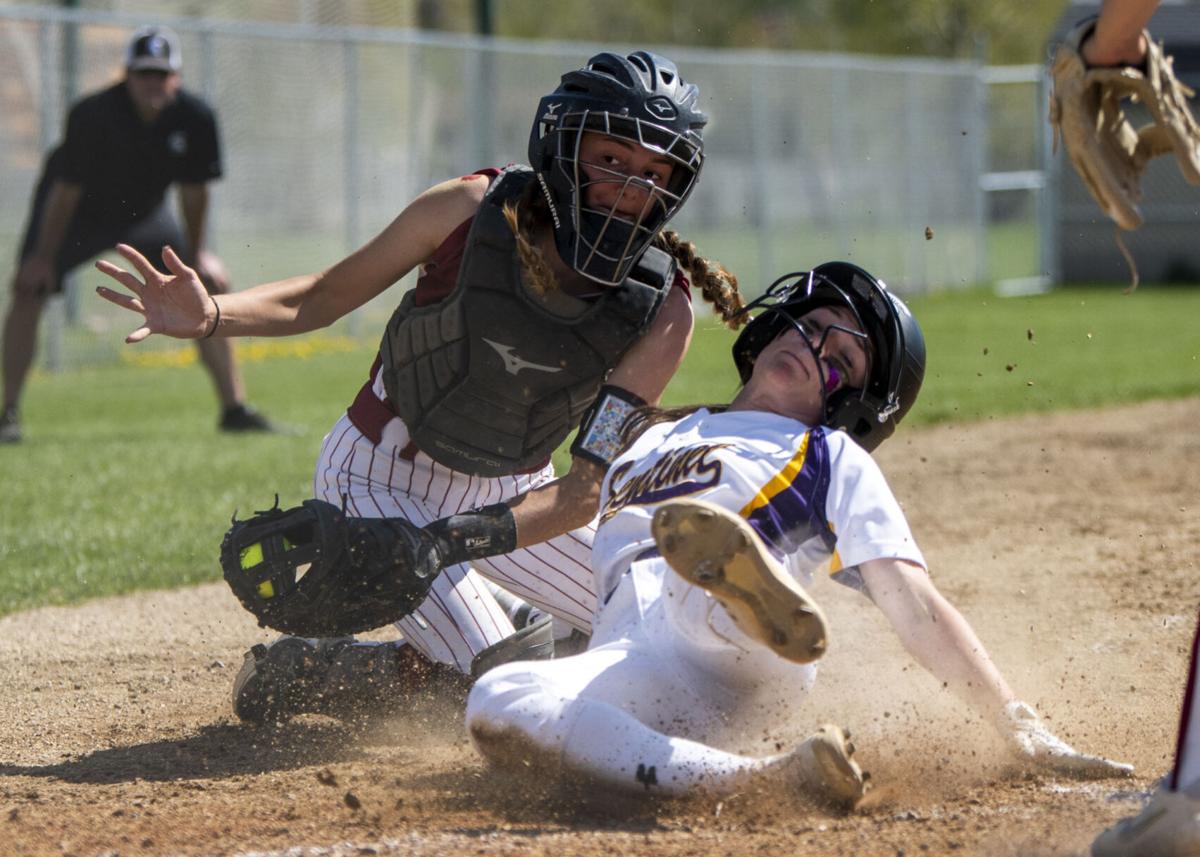 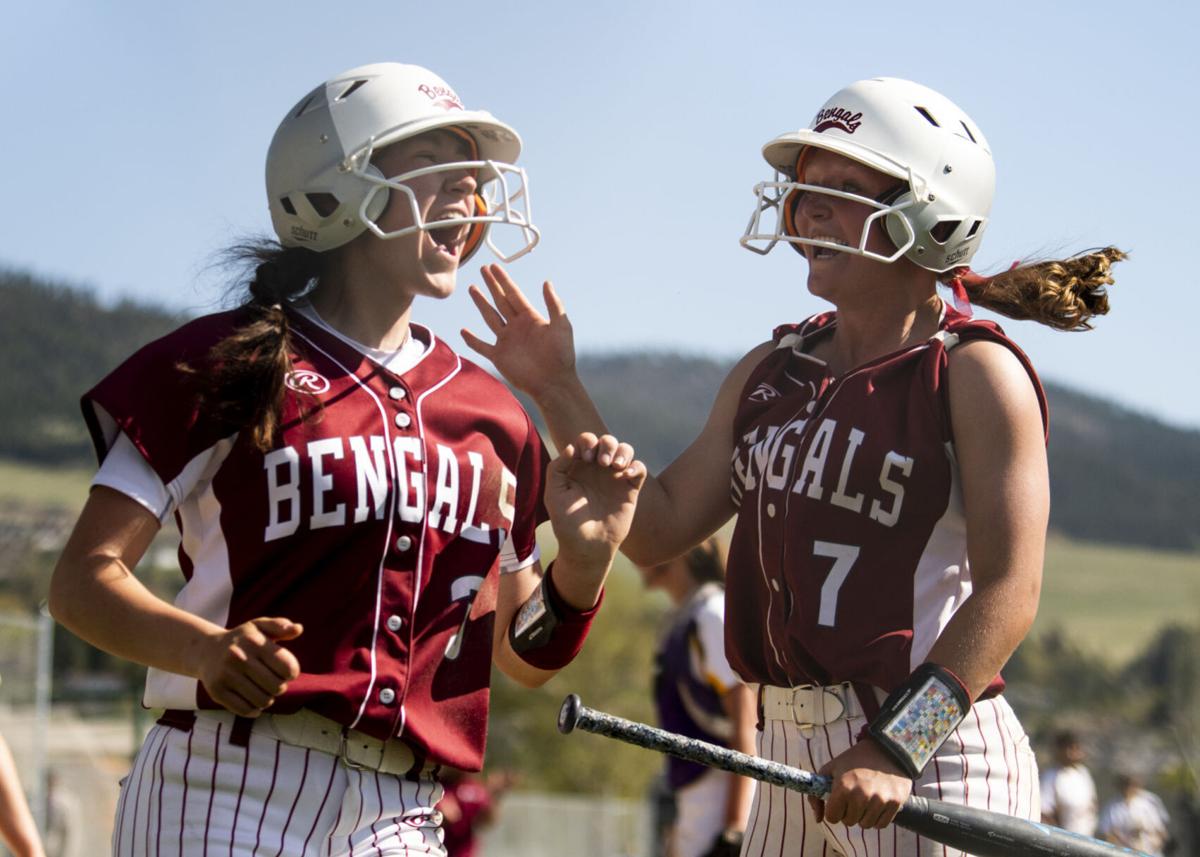 Helena’s Reegan Walsh, left, and Ashlyn Lamping celebrate after Walsh scored a run during their softball game at Sentinel High School, Thursday, May 6, 2021. 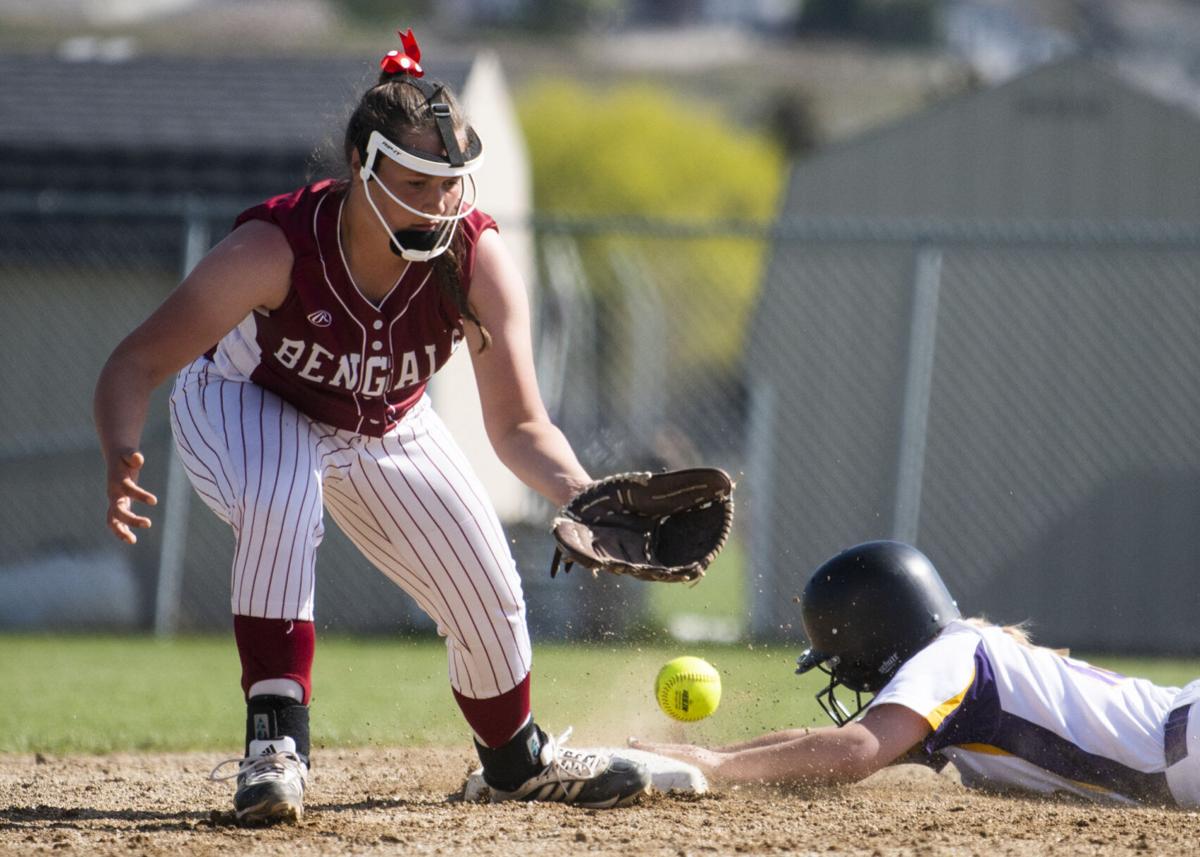 Helena’s Kylee Wetzel, left, attempts to tag out a Sentinel runner during their softball game at Sentinel High School, Thursday, May 6, 2021. 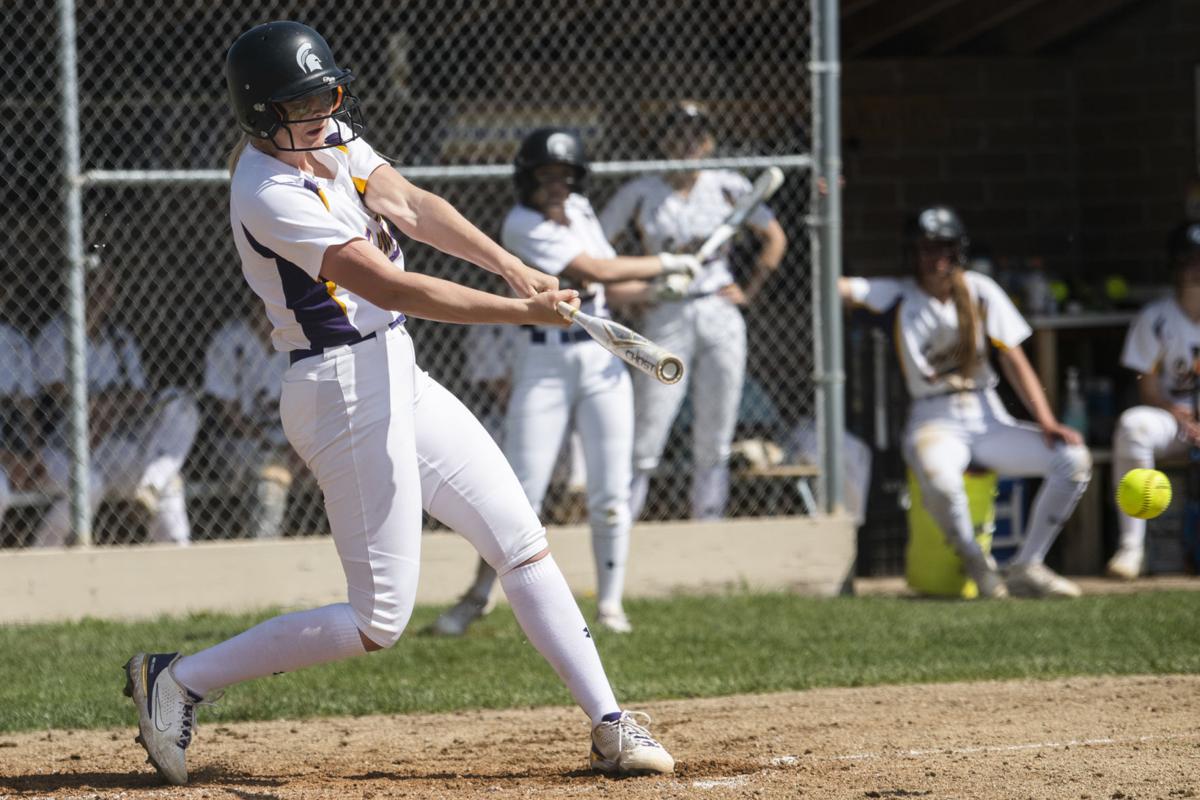 Sentinel’s Grace Hardy swings at the plate during their softball game at Sentinel High School, Thursday, May 6, 2021. 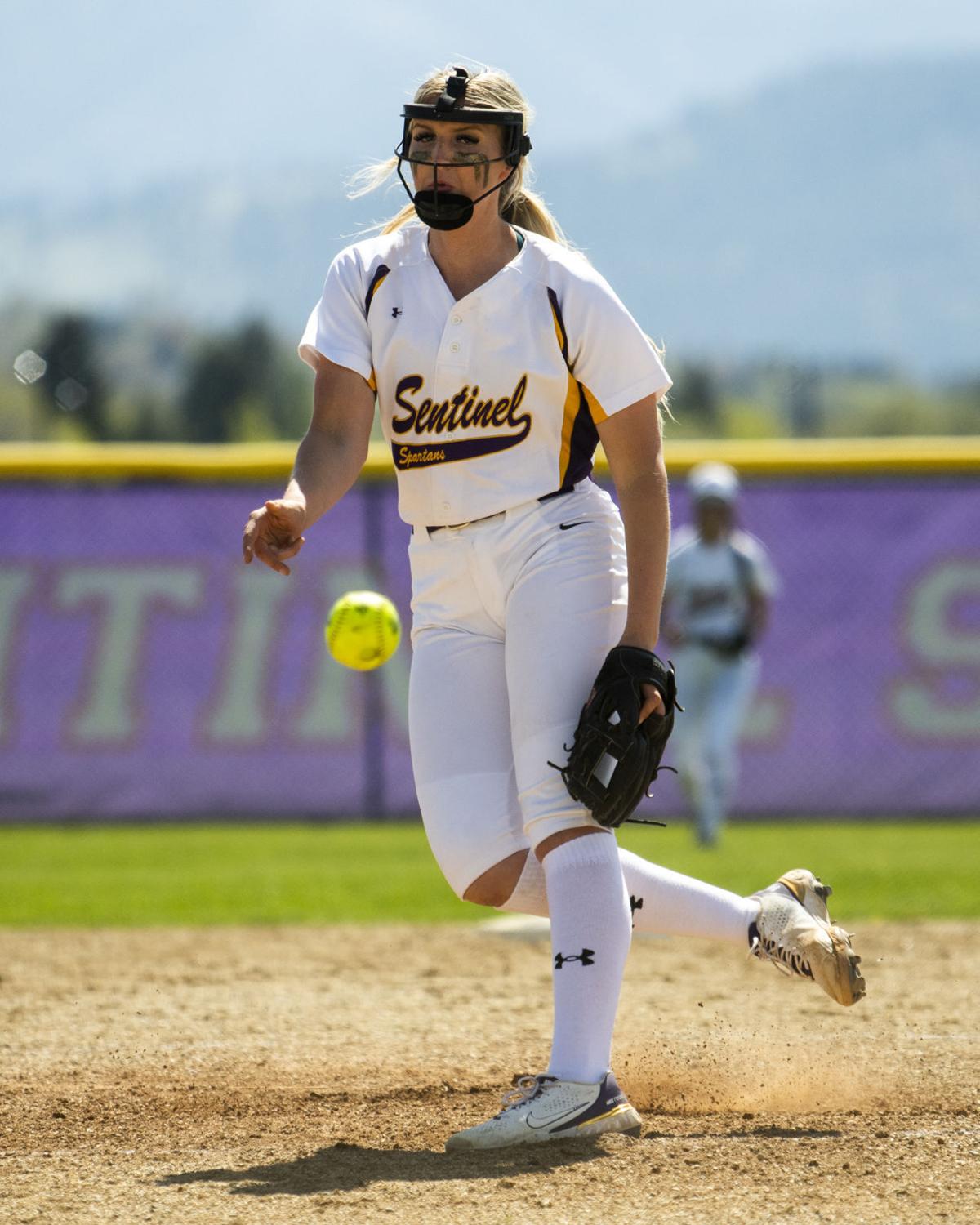 Sentinel’s Grace Hardy delivers from the mound during their softball game at Sentinel High School, Thursday, May 6, 2021.

MISSOULA — Grace Hardy isn’t entirely sure why she quit softball as a kid.

Whatever the details were, she recalls the T-ball game she played in the Rattlesnake area didn’t have the same competitive feel as the actual softball she saw her older sister Sierrah Hardy playing. She decided to get back into the game a couple years later and has found her home in the sport because of her competitive drive and her love for the team nature of the game.

Now a senior at Missoula Sentinel, Hardy has become one of the top high school players in Montana. She also has the Spartans with one of the state's best records despite their split with the Helena schools on a Thursday afternoon that saw the sun beating down and the temperature reaching 82 degrees.

“I couldn’t see myself doing anything else,” she said. “There’s no sport like it.”

Hardy has dedicated herself to softball so much that she’s going to play for the Montana Grizzlies. As she’s searched for that growth and competition, she’s gone on to play softball year round. When she’s traveled to Oregon to play for the Northwest Bullets in the winter, she’d leave Friday afternoons and return at 2 a.m. Mondays during the school year.

Even when Hardy went out of state, she made sure she got to Montana’s softball camps to increase her chances of getting offered by the Griz. She felt she clicked with Griz coach Melanie Meuchel so much that she couldn’t pass up the chance to play for her. It also helped that UM is a successful program with quality facilities.

“I wanted to go to a competitive college,” she said. “I don’t like losing, so I’m not going to somewhere that loses.”

Hardy has helped the Western AA-leading Spartans avoid those losses as much as possible as they chase their first state title. She came into Thursday batting .622 with 25 runs scored, 21 RBIs and six home runs while pitching and playing shortstop. She’ll focus on third base or first base in college.

The weight of proving she belongs at the college level is off her shoulders this year. So, she’s able to focus even more on trying to have a successful high school season after Sentinel was the state runner-up her freshman year. She missed state her sophomore year because of a broken thumb and had last season canceled by the pandemic.

“I still get anxious because I’m so competitive,” she said. “I want to win a state championship with Sentinel definitely.”

Hardy also found joy in the sport because of the team nature of the game. She couldn’t see herself doing an individual sport like golf. She needed to be around teammates.

Hardy is someone who leads by example and tries to help others be comfortable on the field. As the leadoff hitter, she shares with her teammates what she sees after facing each pitcher for the first time in a game in hopes they can gain an edge. It’s something she learned to do while playing travel ball and now brings to the Sentinel program coached by Dustin Delridge.

“Grace is a great cornerstone for this program,” he said. “The support for each other, the manners and encouraging each other, that starts with Grace and the seniors. It’s the most amazing group I’ve coached in terms of respect and hard work and kindness.”

Hardy is one of five senior starters who’ve been on varsity since they were freshmen or sophomores. Three of them will play in college, with center fielder Mac Wright heading to Utah State University Eastern and second baseman Keena Kay going to Columbia Basin. They’re joined by seniors Morgan Holmes at first base and Addy Gaub in right field.

Sometimes it’s the juniors who’ve stepped up in helping Sentinel to a 14-3 overall record, 11-2 mark in conference. Other times it’s the sophomores or freshmen, who are all brand new to the high school level. Delridge sees the hunger for greatness in this group, especially after they missed out on last season.

“You’re seeing extra energy, excitement and effort, which is fun to watch,” he said.

Sentinel entered the doubleheader on a 10-game winning streak after starting the season 3-2. They had outscored teams 192-51 but suffered a 6-4 loss to Helena High before rebounding with a 4-3 win over Helena Capital.

Hardy pitched four innings of one-hit ball while striking out eight batters as Helena struggled to see the ball well. The Bengals picked up their hitting against reliever sophomore Charlee Hoover as they struck for six runs on six hits and two walks in the final three innings.

Even though Hardy went 0 for 4, Helena coach Ryan Schulte has seen her do everything over the years. She can rake at the plate, she can pitch at a solid level and she can field with a strong arm. Above all, her competitive streak shines through for Schulte.

“She’s the complete package,” he said. “You check the box and she has it. I think she’s a fabulous competitor. She’s one of those girls that steps on the diamond and believes she’s going to win. That’s how she plays every day.”

At the plate, or behind it, Helena High's Amber Countryman was a star during the 2021 softball season for the Bengals.

“Sometimes you can’t even feel yourself hit the ball, but then you can watch it fly over the fence...When you can’t feel it, but you know you hit it, that’s the best feeling.” -- Capital's Mackenzie Siegers

What you need to know about the 2021 State AA softball tournament.

Missoula Sentinel’s Grace Hardy tags out a Helena runner attempting to steal second base during their softball game earlier this season.

Sentinel pitcher Grace Hardy delivers from the mound during their softball game at Sentinel.

Helena’s Reegan Walsh, left, and Ashlyn Lamping celebrate after Walsh scored a run during their softball game at Sentinel High School, Thursday, May 6, 2021.

Helena’s Kylee Wetzel, left, attempts to tag out a Sentinel runner during their softball game at Sentinel High School, Thursday, May 6, 2021.

Sentinel’s Grace Hardy swings at the plate during their softball game at Sentinel High School, Thursday, May 6, 2021.

Sentinel’s Grace Hardy delivers from the mound during their softball game at Sentinel High School, Thursday, May 6, 2021.