Helena Capital's Caleb Hoxie winds up for a penalty kick on the second half of Saturday's crosstown rivalry game vs Helena High. The Bruins won 3-0 in their first win against the Bengals in nine years. 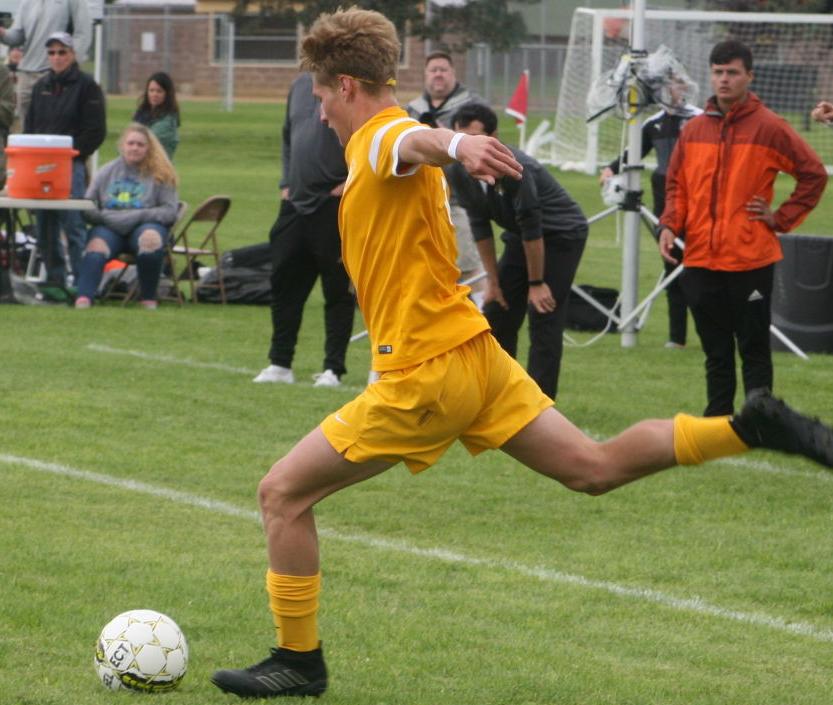 Helena Capital's Caleb Hoxie winds up for a penalty kick on the second half of Saturday's crosstown rivalry game vs Helena High. The Bruins won 3-0 in their first win against the Bengals in nine years.

HELENA -- There is nothing quite like the crosstown rivalry between Helena High and Helena Capital. On Saturday, the Bruins and Bengals renewed it on the soccer fields at Helena Capital.

Both games ended up with a final score of 3-0 and in the process, both Helena High and Helena Capital made some history.

In the first game, between the girls teams, Helena High did something it hasn’t done before and that’s win, on the road, at Helena Capital.

The two teams used to play at Nelson Stadium, but the Bengals (2-0-1) hadn’t ever won a match on the Bruins (0-1-2) home field. That is until Saturday afternoon when Helena High used a hat trick from Elsa Grebenc to earn a 3-0 win over their rival.

“It feels amazing,” Grebenc said. “We played really well and we had great intensity all game. We have had trouble communicating in the past but we really stepped up our game. Everyone really wanted it because we have never won on this field.”

Grebenc set the tone early for the Bengals, who are still unbeaten on the season with two goals in the first half. Then, midway through the second half, she added another score for a hat trick, which she said was her first as a high school player.

“The whole team contributed,” Grebenc said. “I had tons of help and tons of other players working with me.”

Goalie Ashlin Slanger was another key performer as she notched her second shutout in three games. When it came to the defense, though, Helena High coach Mike Meloy said it was a team effort.

“It was a nice win,” he said. “I think our team is improving with our ability to move the ball up the field and our defensive effort was really solid.”

While Capital fell short, head coach Brandon Price said his team would improve and bounce back.

“Tough crosstown game today for the Lady Bruins,” Price said. “We got our loss out of the way and we are moving on to be ready for next time.”

While the Helena High girls made some history in the first contest, in the boys game, it was Helena Capital that did something it hasn’t done in nine years and that’s beat Helena High.

The Bruins grabbed an early lead thanks to an own goal by the Bengals. Capital held a 1-0 edge at the half.

But during the next 45 minutes, the Bruins relentless attack finally paid dividends. Ryan Quinn earned a penalty kick in the 65th minute and Caleb Hoxie was able to drill it home to extend the lead to 2-0.

“It was obviously an important moment in the game. We were up 1-nil and if we could score, it would put us up two and that’s hard to come back from,” Hoxie said. “It felt great to see it go in. It’s great to get that monkey off our back.”

Despite the 2-0 lead, the Bruins continued to press forward and eventually, it yielded another goal, this time from Quinn. His ball found the back of the net in the 78th minute and soon after, the celebration was on for the Bruins.

“This is the ninth time we have played them in my high school career and the first time we beat them,” Quinn said. “It’s the second-best feeling I have ever had in high school after taking fifth at state. I am so hyped right now.”

Quinn’s goal provided some insurance for a Bruins team that lost a 2-0 lead to Helena High last season.

“It was a big relief,” Quinn said of his goal. “Last year, we went up on them 2-0 and ended up losing, so it felt really good to get that last one and put it away.”

Henry Lauerman was also clutch for the Bruins as the keeper was credited with 13 saves, including nine in the second half.

The victory was the second in three days for Capital, which also took down Missoula Sentinel 3-1 Thursday in Missoula. Hoxie scored twice, with one goal coming on a penalty kick, while the other came from Adain Adamek, who also added an assist, as did Quinn.

The Bruin girls were also in action last Thursday and battled their way to a 3-3 tie with Missoula Sentinel. Capital got a hat trick from Ellie Stiffler and following their defeat to Helena High, they are now 0-1-2 on the season.

Chris is the sports editor and lead preps reporter for the Independent Record and 406sports.com. Follow him him on Twitter @cmpetey406