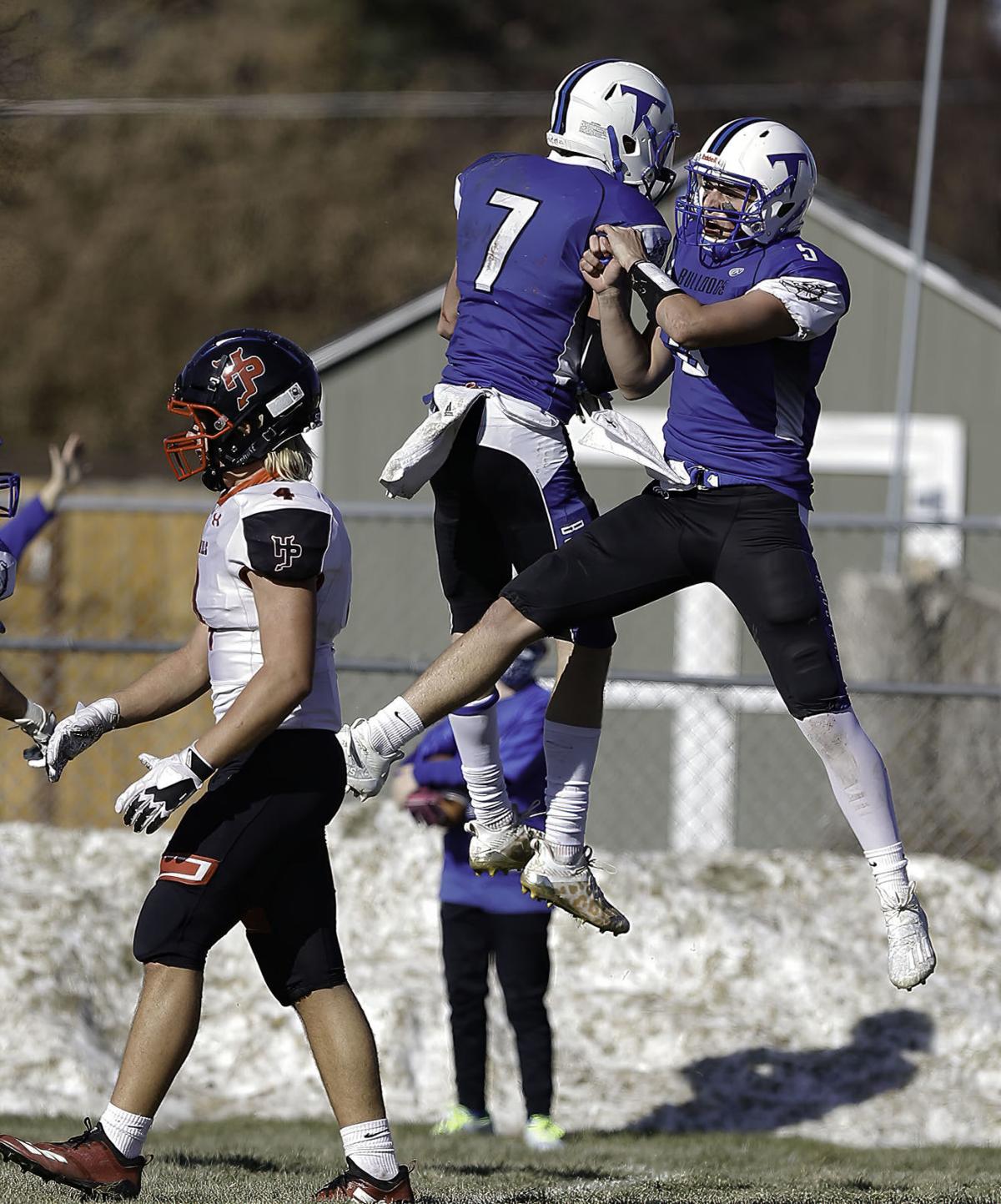 From left, Gavin Vandenacre and Trey Hoveland celebrate a touchdown last season in a playoff win for the Bulldogs in Townsend. 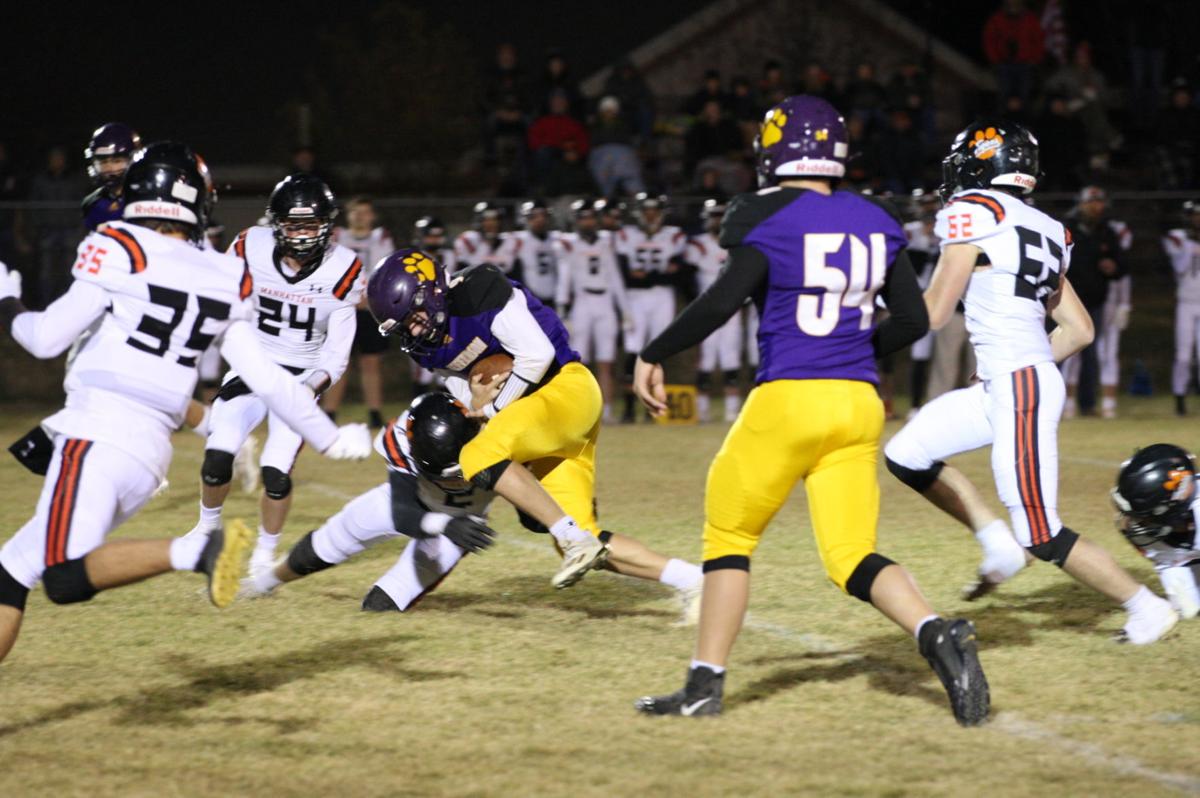 Jefferson's Braden Morris breaking tackles for extra yardage on a run during Friday's game against Manhattan. 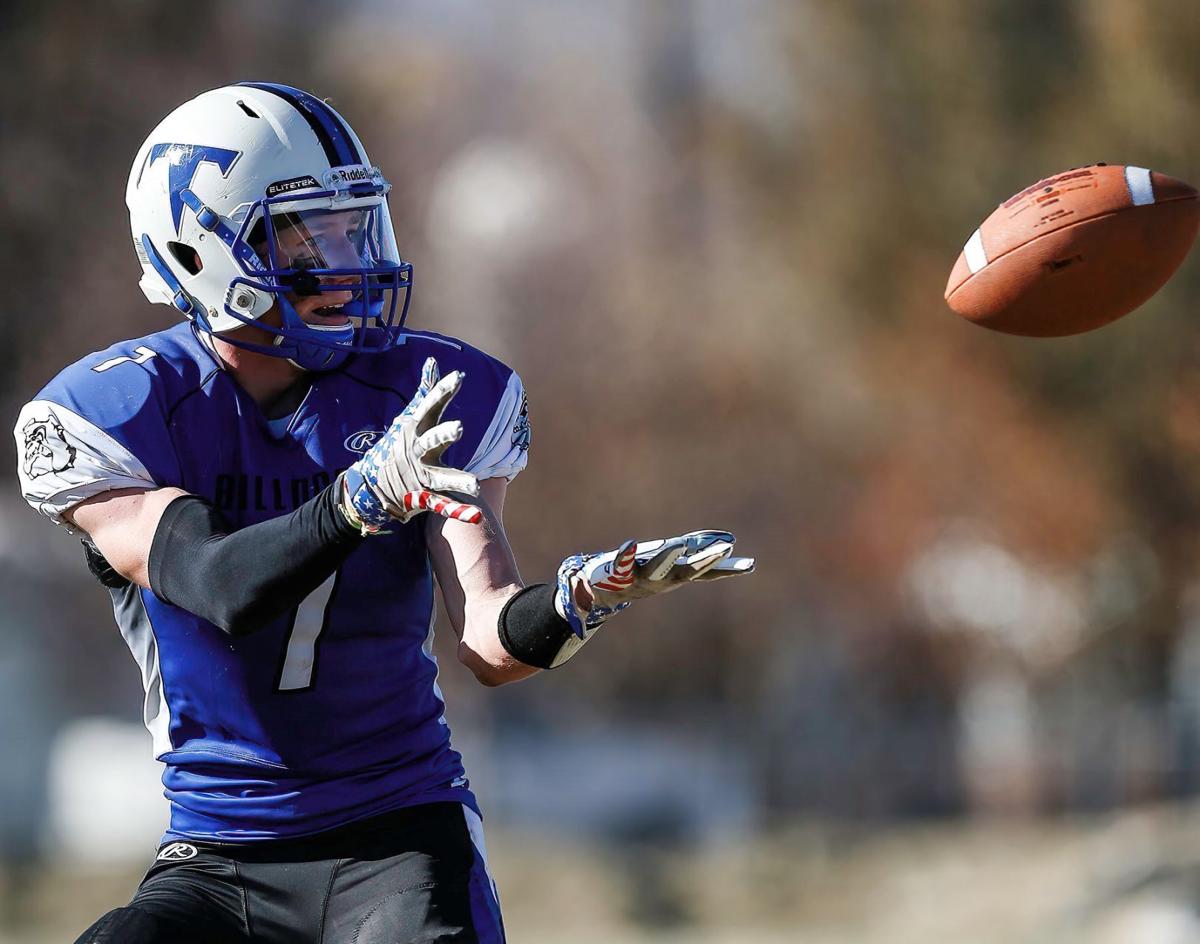 HELENA — Both Townsend and Jefferson have already clinched spots in the Class B state playoffs, but Friday night’s regular-season finale still carries some weight. If Townsend wins, the Bulldogs would clinch a conference championship for the first time since 2014, cap-off an undefeated conference slate and enter the playoffs on a five-game winning streak.

“That’s been our main concern this week. We’re not worried about tiebreaker systems or anything like that. Our focus is that we need to go out there and win the game and win the conference championship for ourselves,” Townsend head coach Travis Rauh said. “That’s been our only focus.”

Jefferson could force at least a two-way tie if the Panthers win on their home field. It would be Jefferson’s fourth-straight victory and propel the program into the state playoffs at 6-2 and with a win over a title favorite.

“Going into the playoffs, if we could pull out a win against Townsend, that’s just more momentum going in, we’d be on a four-game winning streak. They’re one of the top-two teams in Class B, in my opinion, and to be able to ride that wave into the playoffs would be huge.”

For as good as both team’s offenses have been this season, the spotlight very well could be on two outstanding defenses Friday night. Both Townsend and Jefferson have played five games where their defenses have allowed no more than 14 points. The Bulldogs have three shutouts to their credit and give up just 8.7 points per game.

“Ridger Jones, Klause Rauser and Dawson Sweat at linebacker have all been phenomenal this year,” Rauh said. “Our secondary, led by Gavin Vandenacre and Jesus Garcia, just a strong group as a whole, they’ve done very well.”

Rauh said he has enjoyed seeing the consistency from his defense this season and, to him, it seems like the unit is improving week-to-week.

Jefferson will counter with a defense that gives up just over 11 points per contest. Senior Wade Rykal has lived in offensive backfields this season and paces the roster with 7.5 sacks. Jake Genger, Jace Oxarart and Caleb Smartnick have all picked up 40-plus tackles, with Genger adding four fumble recoveries and three interceptions to his ledger.

That secondary has a tall task on Friday in attempting to stop -- or at least slow down -- Townsend’s Trey Hoveland-Gavin Vandenacre connection. That duo has been terrorizing Class B teams for the last couple of seasons, and Layng understands that limiting big plays is an important part to taking down Townsend.

“Gavin Vandenacre is a handful, I think he’s probably the best wide receiver in Class B and in the state,” Layng said. “We’ve gotta be aware of him and we gotta try to contain him. You’re not going to shut him out, he’s going to make some plays, he’ll have some catches, but we’ve gotta at least reduce those numbers.”

Senior quarterback Braden Morris is the straw that stirs the drink for Jefferson. He has 15 total touchdowns (10 passing, five rushing) this season and over 1,000 total yards of offense.

“He’s a really nice player,” Rauh said of Morris. “One of the first things we’re gonna do is try to keep him in the pocket. He has a two-way go where he can run and throw and he becomes an even more dangerous player. We want to keep him bottled up as much as we can.”

Morris has completed just over 46 percent of his passes, but has cleared the 700-yard plateau. His 284 rushing yards is second on the team to Dylan Root’s 349. Jefferson features four rushers who have all cleared 100 yards while the team has picked up north of 1,000 yards on the ground thus far.

Running the football is something Layng said his team will need to continue doing Friday night in front of a home crowd on senior night in order to beat a tough Townsend team.

“I said [to the players] that it’s a big game,” Layng said. “This is why you play football for games like this. I said let’s just go out there and play the best possible game we can and however it ends up, it ends up. I try not to put too much pressure on it.”

Rauh thinks his team is on the verge of playing its best football of the season. He said his team has been building toward that in each of the last several weeks, and from an all-phases standpoint, the Bulldogs are coming together at the right time.

That could potentially spell good things for a team looking to get over what has been a seven-year hurdle in trying to get a conference title for the program.

“We’ve actually been in this situation [before], with a win we could win the conference several times in the last couple of years,” Rauh said. “Obviously we’re looking to get over that hump this week.”

Kick off from Boulder is scheduled for 7 p.m. on Friday.

The Spartans went back-to-back with defeats of Billings West in both the 2020 and 2021 AA championships.

Rostad's 228 yards and three TDs were too much as Hamilton capped a perfect season..

Boxscore from the Class AA state championship between Missoula Sentinel and Billings West.

Froid-Lake capped an undefeated season with a shut out in the 6-man State Championship game on Saturday, beating Power-Dutton-Brady for the RedHawks' second-straight first-place trophy.

Dantic is the 11th known commitment to UM's 2022 recruiting class, and the ninth from within the state.

Going the distance: The last teams hit the road in the Montana high school football playoffs

Of the final 10 teams, four have not left the comforts of home during the 2021 playoffs.

'He's a money player': Forrest Suero has been a force in Helena High's playoff run

"He's the best defensive lineman in the state," Helena High head coach Scott Evans said. "He's dynamic and we tell him: We are going to showcase you and I think he likes that. He likes being that money player."

Tom Brady talks about what he looks forward to in retirement

Tom Brady talks about what he looks forward to in retirement

From left, Gavin Vandenacre and Trey Hoveland celebrate a touchdown last season in a playoff win for the Bulldogs in Townsend.

Jefferson's Braden Morris breaking tackles for extra yardage on a run during Friday's game against Manhattan.