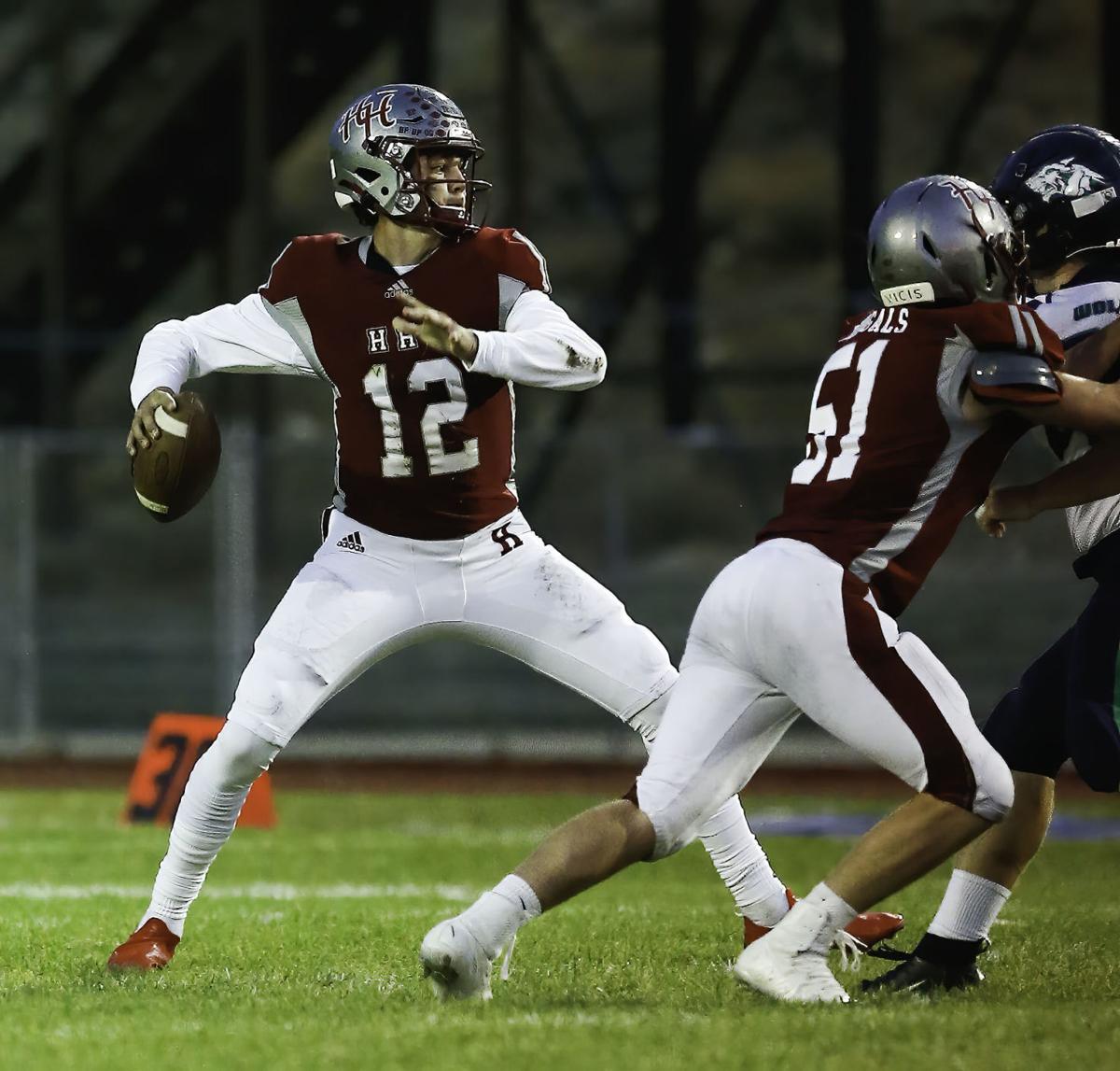 Helena High's Kaden Huot throws a pass against Glacier on Friday night in a 34-14 win for the Bengals. Huot finished with four touchdown passes. 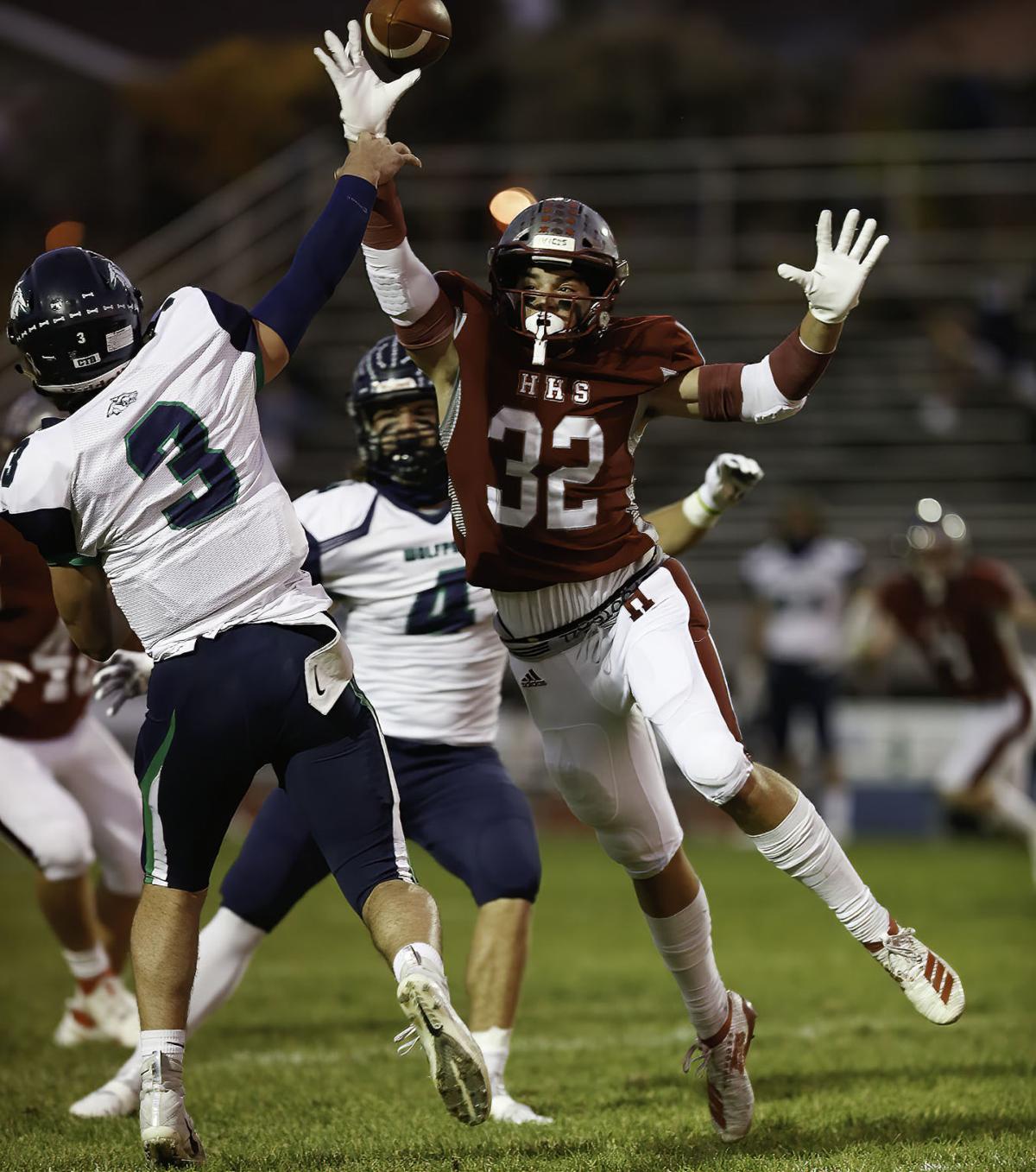 Ben Swanson (32) of Helena High gets his hand up while J.T. Allen of Glacier throws a pass Friday night at Vigilante Stadium.

HELENA — While the Helena High defense was certainly up to the task of slowing down Glacier running back Jake Rendina on Friday night, the biggest difference between the Bengals and the Wolfpack was at the quarterback position.

In other words, the Bengals had Kaden Huot and Glacier didn't.

And while the Helena junior didn't break any single-game records this time around, he was at his best in a 34-14 win for Helena at home at Vigilante Stadium, as he passed for 291 yards and four touchdowns.

"There were two or three plays that you just don't see from a high school kid," Helena High head coach Scott Evans said of Huot. "I'll be honest with you, I sat there watching and I'm just going, 'Wow, he just made that throw.''

What a throw. Huot to Miller on third and long. pic.twitter.com/Z1ChKGv2ji

The game started with the two teams feeling each other out. But then late in the first quarter, Helena made quick work of a short field and struck first on a touchdown run by Marcus Evans.

Then, in the second quarter, Huot made one of those "wow" plays Coach Evans was talking about, throwing a 50-yard strike to Raef Miller to put the Bengals in front 13-0.

"He's a big-time player," Evans said. "And it just makes your football team that much better when you have a quarterback who can make the big throw when you need it."

Trailing by two scores at the break, Glacier needed some momentum and got one with an interception on a tipped pass. Soon after, Rendina converted a fourth-and-goal from the three and suddenly, the Wolfpack were down just 13-7.

On the next drive, facing a third-and-long, Huot found Ben Swanson, who also notched two interceptions in the win, for a clutch first down.

Another conversion to Chase McGurran eventually set up Huot's second touchdown pass of the night, which went to McGurran, making the score 20-7.

"It's all Huot," McGurran said. "He threads the needle and I just have to get there. It was great passes, we just have to finish."

Glacier moved the ball across midfield but turned it over on downs early in the fourth quarter, giving the ball back to Huot, who converted a third-and-13 to Raef Miller on the ensuing drive. Helena eventually capped it with a Dexter Tedesco touchdown reception, making it 27-7 with 8:14 left.

Swanson, who picked off his first pass in the first half, nabbed his second interception of the night. A few plays later, Huot avoided the Glacier pass rush, as he did seemingly all night, and found McGurran for another score from six yards out. At that point, it was 34-7 and all but over.

Are you serious!? Huot dodges, dips and hits McGurran again. Absolutely unreal. TD pass No. 4. There is your dagger! 3:51 left and the rout is on, 34-7. #mtscores pic.twitter.com/VIRDP0Wr1y

"We've been playing football together since second grade," McGurran said. "So I kind of know what he does. When he gets nervous and I see his feet going, I just try to get open as much as I can."

"My receivers, they did an awesome job," Huot said. "I can't ask for more. We were just having fun and balling out."

And most importantly, when Glacier pulled within six, he directed the Bengals on three straight scoring drives.

"The game really slowed down for me," Huot said. "And I just had fun with it."

Scott Evans was most impressed with Huot's response to his lone turnover.

"His composure held up and he did a great job," Evans said. "He never got out of sorts and that's a testament to his growth as a player. Now he shakes that stuff off where he used to get rattled a bit and I love that."

As stellar as Huot was, the Bengals defense was right on par, limiting Rendina to 136 yards on 31 carries. He also scored two touchdowns but he was fresh off back-to-back 200 yard games and he was mostly hemmed in.

"It was an amazing job by our defense," Swanson said. "We wish that we wouldn't have given up those points late, but this is an amazing feeling and hopefully we can keep it rolling."

"That's a good football team and Rendina, he's one of the best football players in the state," Evans added. "I think our kids just persevered and there were some crucial moments in the game and our kids stepped up to the occasion."

Now, the third-ranked Bengals (5-0) will travel to No. 1 Missoula Sentinel (5-0) and if they win, they will be Western AA regular-season champions.

"We are excited to go into Missoula," Huot said. "They better be ready, because we're coming."

What a throw. Huot to Miller on third and long. pic.twitter.com/Z1ChKGv2ji

Helena High's Kaden Huot throws a pass against Glacier on Friday night in a 34-14 win for the Bengals. Huot finished with four touchdown passes.

Ben Swanson (32) of Helena High gets his hand up while J.T. Allen of Glacier throws a pass Friday night at Vigilante Stadium.