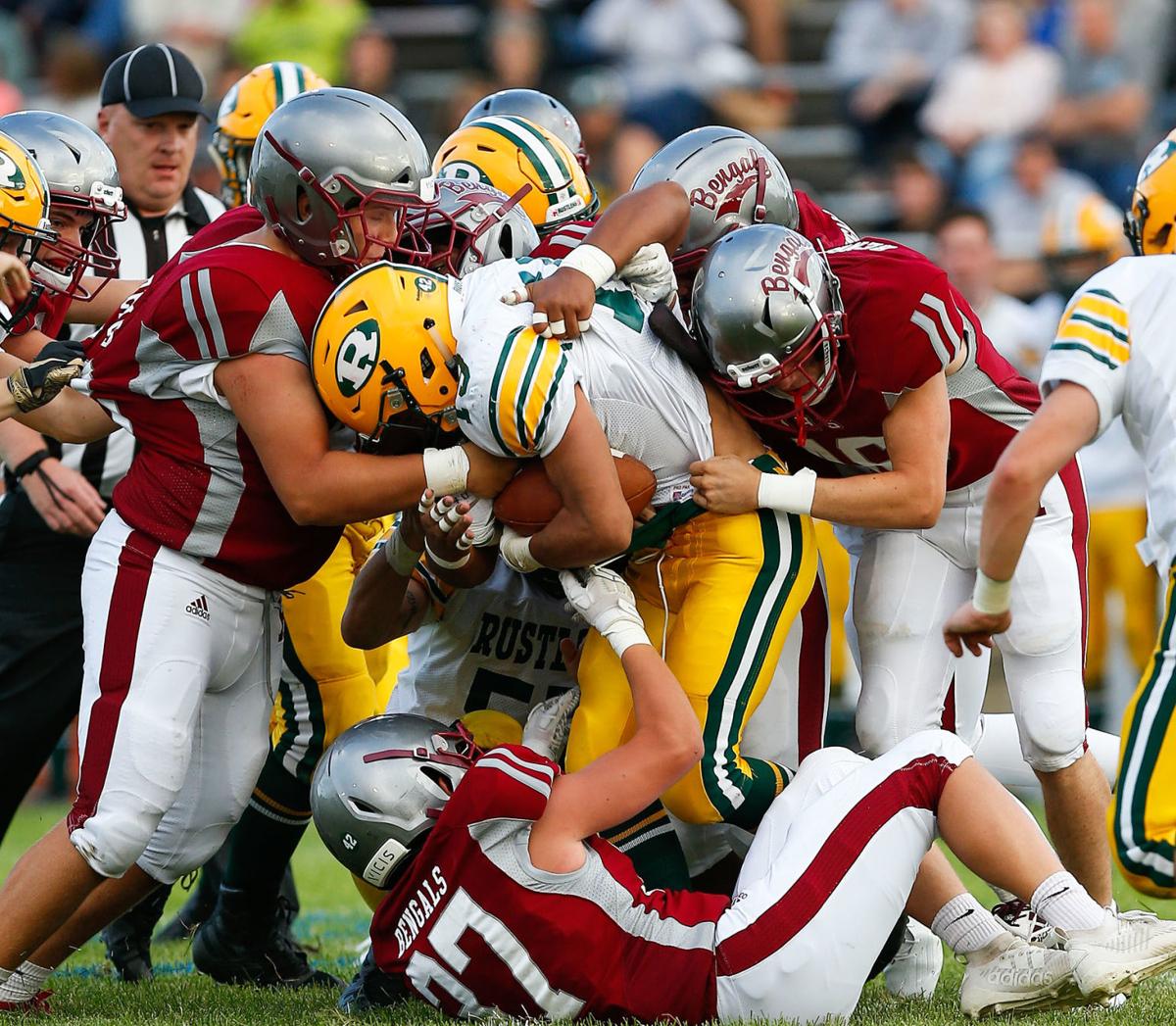 Helena High’s defense brings down CMR’s Bryce Nelson for no gain during Friday’s game at Vigilante Stadium. The Bengals defeat the Rustler’s 26-15. 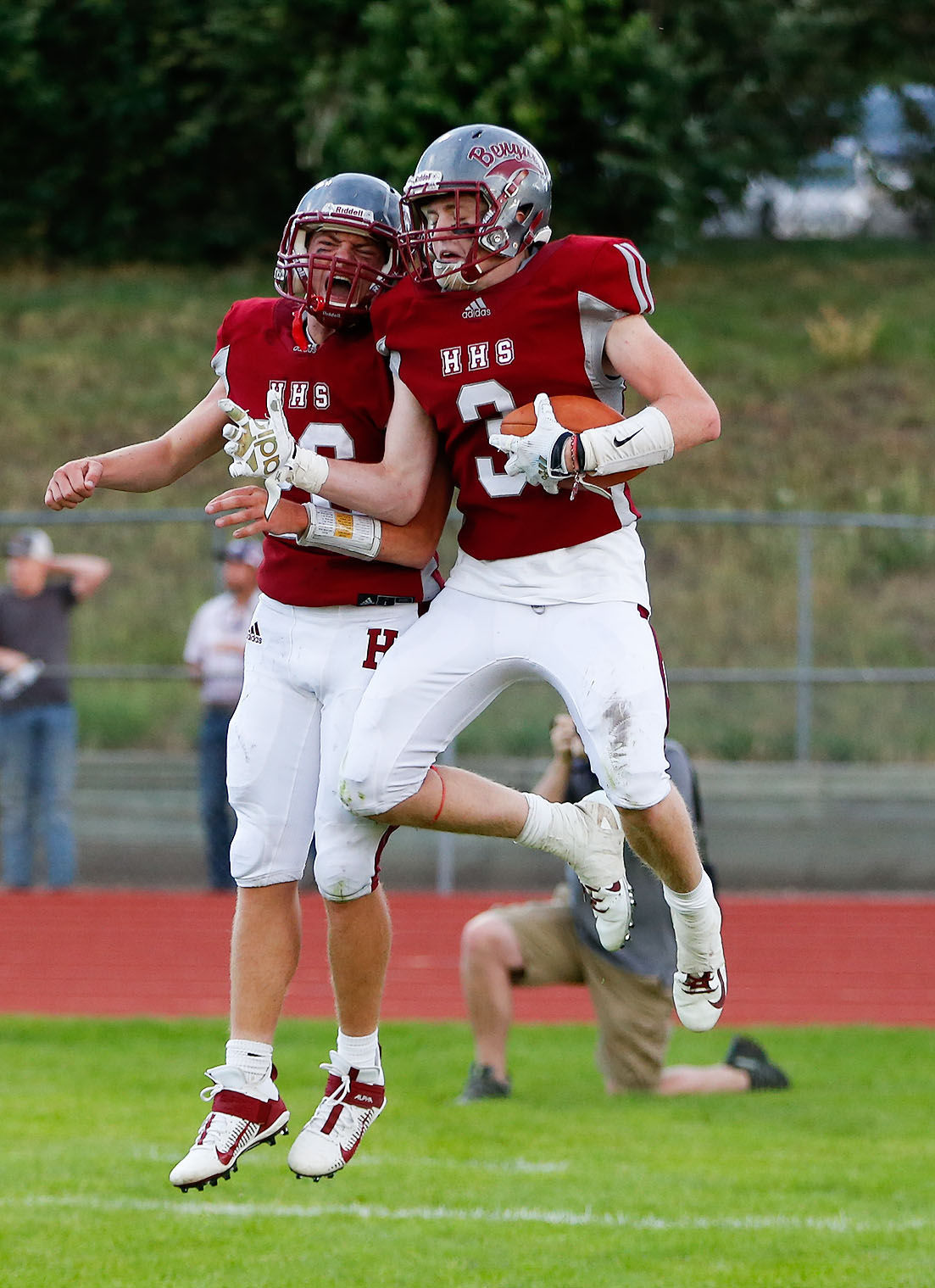 Helena High’s Kyler Tesch (3) celebrates with Logan Brown after a short TD pass during Friday’s game against CMR at Vigilante Stadium. The Bengals defeated the Rustler’s 26-15.

HELENA — It wasn’t until moments before kickoff Friday night that the Helena High faithful knew that Kaden Huot was going to be the starting quarterback.

But after the announcement was made, it didn’t take long to see why head coach Scott Evans and the Bengals went with the ultra-talented sophomore.

In his first career start, Huot was poised and collected. His stats weren’t gaudy but some of his throws were, including a 13-yard touchdown pass to Kyler Tesch late in the first half.

Kaden Huot with his first TD pass this season to Kyler Tesch. Don’t get the two. 19-7. 2:18 left 2Q #mtscores pic.twitter.com/tjPHwOR86J

When it was all said and done, Huot threw for 172 yards and one touchdown as the Bengals knocked off CMR 26-15 in the season opener for both teams Friday at Vigilante Stadium in Helena.

“This is an amazing feeling,” Huot said afterward. “This is the best feeling ever.”

Huot and Tesch both had big nights, but so did Hayden Ferguson, the senior who played running back, quarterback, receiver and tight end, as well as safety. He finished with two rushing touchdowns in the win for Helena High.

“Those guys have been so amazing,” Huot said of Ferguson and Tesch. “They have helped me so much. They have been really awesome.”

Following a CMR turnover on the ensuing possession, Huot connected with Tesch for 30 yards advancing the ball down to the Rustlers three before Ferguson finished off the drive with the first of two scores.

CMR found the scoreboard after a touchdown pass from Bryce Nelson to Keegan Barnes, trimming the lead to 13-7 midway through the second quarter.

Yet, before intermission, Huot found Tesch in the back of the end zone on a 13-yard scoring strike that extended the lead to 19-7 at the half. In the fourth quarter, after the Bengals recovered a second fumble, Ferguson walked in for an easy score in what proved to be the final dagger.

“We got a little sloppy towards the end,” Evans said. “But it was a great game. I loved to see the hustle and I love what our kids are doing.”

“It’s nice to have a guy like that who can huck the rock around,” Evans said. “And that frees up (Hayden) Ferguson to do a lot of stuff for us. We really feel like we have a good one-two combination back there.”

Tesch proved to be the most reliable target for Huot hauling in seven receptions for 97 yards. Raef Miller also caught two for 47, including a 39-yard reception in the second half. Ferguson, who threw for 18 yards, also ran for 46 yards on 14 carries, while Brown had 11 attempts for 31.

The Bengals defense was also impressive, notching multiple sacks in the second half and forcing a pair of turnovers that led to 13 points. CMR scored a touchdown in the closing minutes to make the final deficit 11.

“I tell you what, our kids played well defensively,” Evans said. “I liked what we did. We started four sophomores, three juniors and four seniors. We were running a lot of D-lineman out there tonight and the effort, that is what I loved more than anything.”

Chris is the sports editor and lead preps reporter for the Independent Record and 406sports.com. Follow him him on Twitter @cmpetey406

Helena High’s defense brings down CMR’s Bryce Nelson for no gain during Friday’s game at Vigilante Stadium. The Bengals defeat the Rustler’s 26-15.

Helena High’s Kyler Tesch (3) celebrates with Logan Brown after a short TD pass during Friday’s game against CMR at Vigilante Stadium. The Bengals defeated the Rustler’s 26-15.