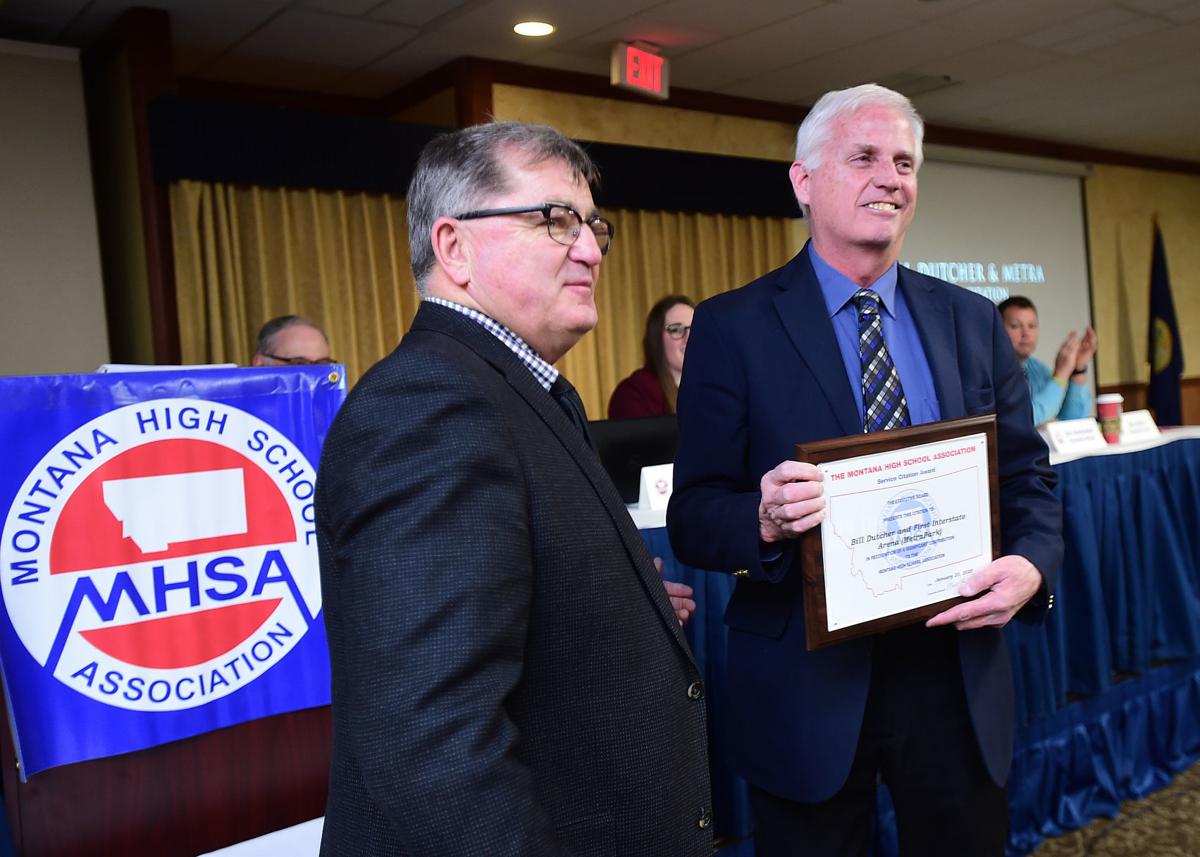 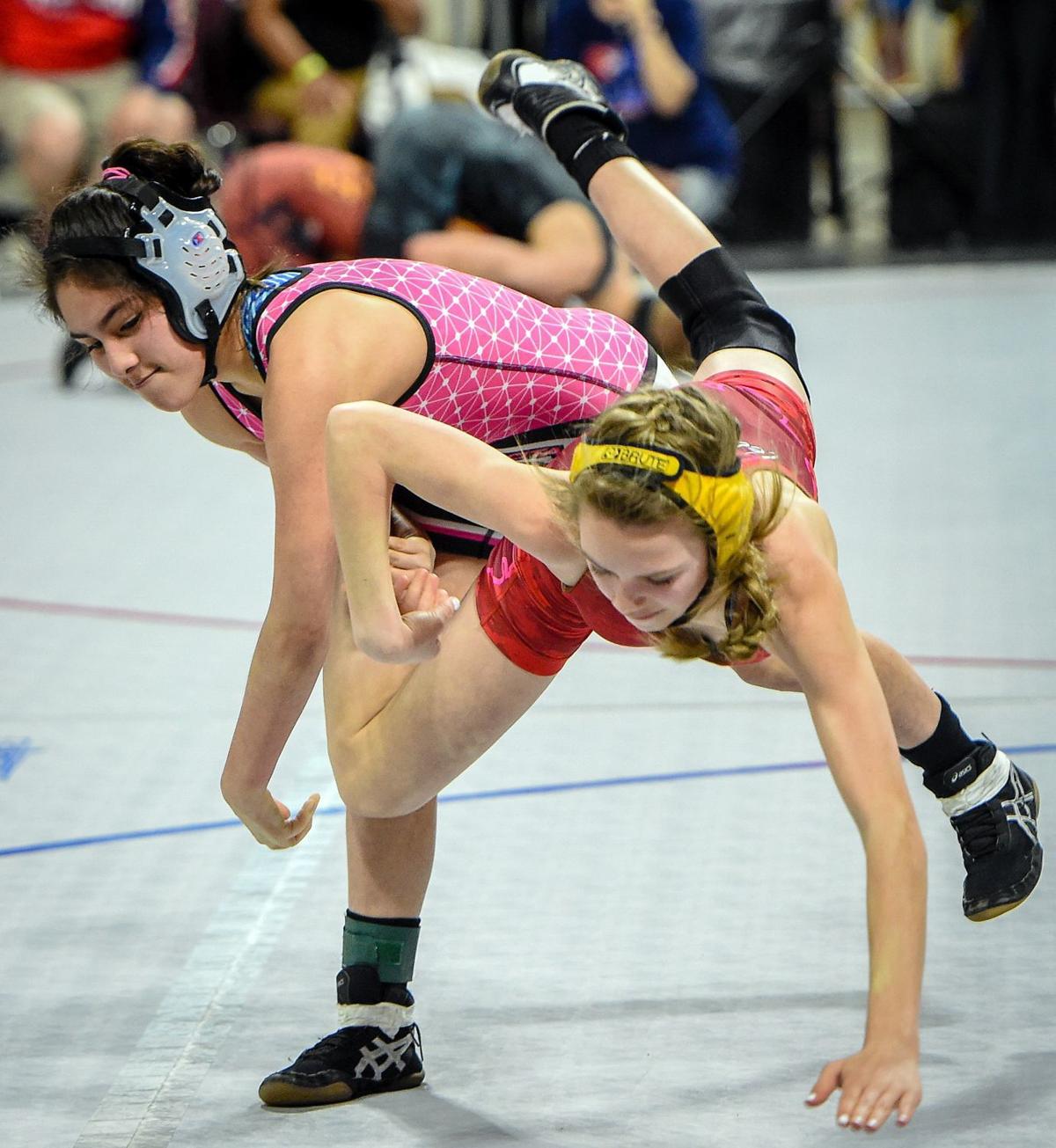 Jennifer Verdin throws Katherine Mickelson to the mat at the Montana Open wrestling tournament in Billings on March 30, 2019. Girls wrestling was added as an MHSA-sanctioned sport on Monday.

There were nine other proposals during the meeting, including one to change the state volleyball bracket for all classifications. That proposal failed.

Two new sports will be offered

Schools can decide if they want to add girls wrestling and boys powerlifting beginning next school year (2020-21). Boys powerlifting was proposed, in large part, to make the addition of girls wrestling feasible — schools must offer an equal number of boys and girls sports. Many Class AA and A schools already offer every available MHSA-sanctioned sport, so they wouldn’t be able to offer girls wrestling without adding a new male sport or dropping a current one.

On Monday, the MHSA initially announced that the boys powerlifting proposal failed, but a specific count determined that the “yes” votes outnumbered the “no” votes by about 20.

An ad hoc committee recommended adding girls wrestling months ago. In November, the MHSA announced its proposals to add that sport and boys powerlifting.

Girls wrestling will be a winter sport. Female wrestlers will be able to compete against male or female opponents during the regular season, according to the committee’s implementation plan. Proposed weight classes will be 103, 113, 126, 138, 152, 170 and 205 pounds. The postseason will not include girls divisional tournaments, and the state tournament will consist of one classification.

There are 75 high school girls wrestling this season, according to MHSA executive director Mark Beckman. One of them is Cascade’s Lily Grismer, who placed fourth at last year’s Class B-C Southern Divisional tournament and is No. 6 among 113-pound wrestlers in the most recent B-C rankings.

“There’s a big interest in girls wrestling across the country, and we’re sort of just following the leads of other states that have implemented it,” Beckman told 406mtsports.com on Monday. “Now that they know that they can go through the regular season and then there will be a girls-only tournament, all comers, at the Metra(Park), I think that you’re gonna see some more come out (for wrestling).”

The ad hoc girls wrestling committee reviewed several options for boys sports and chose boys powerlifting “because it would be easy to administer and cost effective to implement,” the MHSA wrote in its breakdown of Annual Meeting proposals.

The boys powerlifting season is tentatively scheduled for the spring “to minimize conflicts with MHSA sports and the independent powerlifting association’s season,” the MHSA wrote. The sport will include team and individual competitions, which will be “Full Power”: squat first, bench press second and dead lift third. There will be one classification for the state meet.

No changes to state volleyball bracket

The current state volleyball bracket for all classifications allows teams to reach the championship match even if they lose in the first round (Helena did so in November’s State AA tournament). Kalispell Glacier proposed a change to the bracket that would force teams to win their first two state matches in order to reach the title match. Teams that lost in the first round or semifinals would fall to the loser’s bracket and have no chance to play for first or second place.

The failure of the proposal on Monday keeps the current bracket in place, preserving the chance for teams to win state the hard way.

In November, Helena won three matches on Friday and one on Saturday at 10 a.m. to reach the title match, which began around noon on Saturday. Helena Capital, which played twice on Thursday and once on Friday, beat the Bengals for the championship.

• A proposal to add penalties for recruiting violations passed. Under the new rule, a head coach at a school that has broken the MHSA’s recruiting rule will be suspended for at least one varsity competition.

• A proposal to change the golf coaching rule passed. The amendment will allow golf coaches to give instruction to a player on a hole until the player’s ball is on the green.

• A proposal to limit co-op trophies passed. With this amendment, the MHSA will purchase and give out one trophy to a cooperative (a team with players from two or more schools). If the other school(s) in the co-op want its own trophy, the schools involved can buy one.

• A proposal to allow athletes to wear certain warmup shirts before games passed. Before this amendment, some warmup shirts — purchased by schools or boosters — could violate the MHSA’s award rule.

• A proposal to amend the MHSA’s eligibility by-law passed. The by-law currently states that students must be enrolled at the school where they participate for 20 hours per week and in regular attendance at the school for 10 hours per week. The amendment makes an exception for students who are enrolled and participate in a transformational learning program at their school.

• A proposal to allow home-schooled students to be eligible for sports at member schools (under four conditions) was withdrawn.

• A proposal to stop giving trophies to football and soccer teams that lose in the semifinals failed.

• A proposal to amend the MHSA’s rules about eighth-grader athletic participation and transfers failed.

The MHSA handed out several awards on Monday, and one of them included three Billings fixtures.

The NFHS Music Award was given to BPS music/art education coordinator Scott Corey.

Dan Carpenter set records at all three levels – high school, college and professionally – and is only the fifth Helenan to play in the NFL.

For the Capital wrestling team, there was no better way to cap off senior night than with a win over Helena High or a pin by Zane McCormick.

Jennifer Verdin throws Katherine Mickelson to the mat at the Montana Open wrestling tournament in Billings on March 30, 2019. Girls wrestling was added as an MHSA-sanctioned sport on Monday.