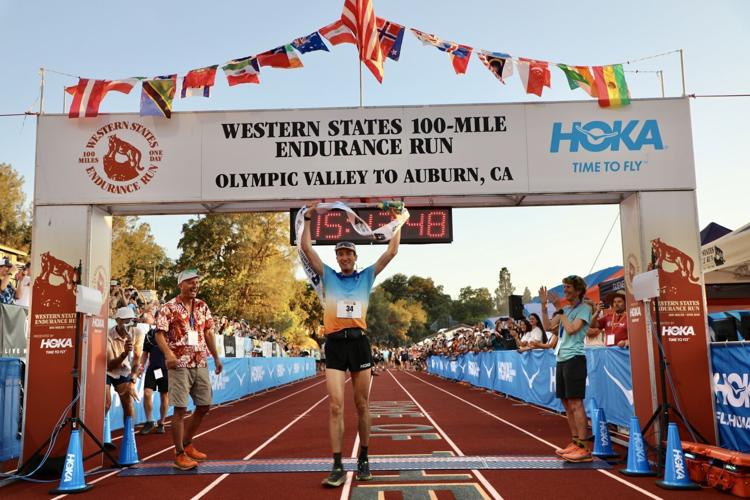 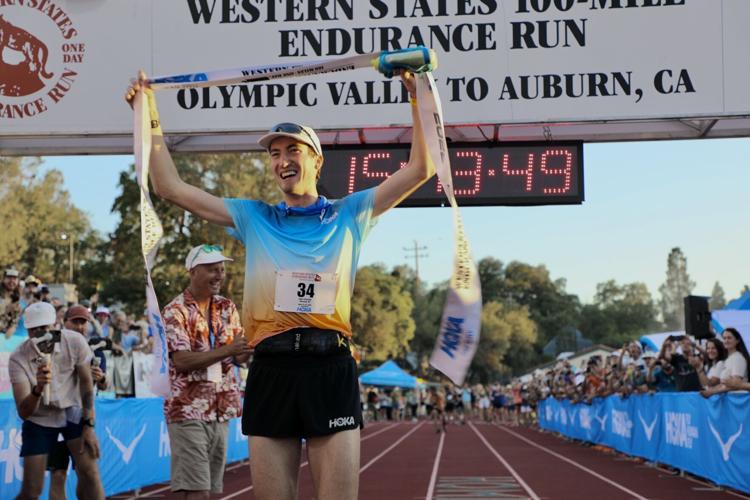 Adam Peterman holds the tape at the the finish line of the 2022 Western States 100-mile endurance race last week in California. 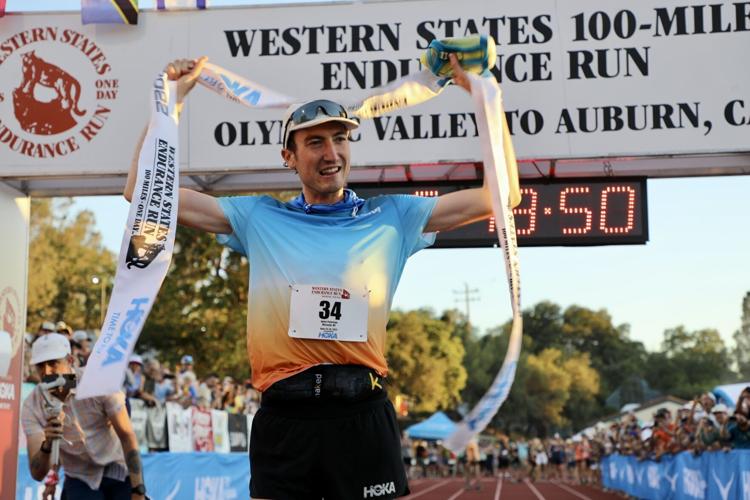 He saw last year's winner and ultra running legend Jim Walmsley take his third title in the daunting race, crossing the line to an electric atmosphere of cheers and celebration. Peterman watched as Beth Pascall claimed the second-fastest women's time at the event on a scorching, 101-degree day. On the other end of the spectrum, he experienced what it's like to support those who have to drop out when his partner Erin Clark's race came to an early end.

So it's surreal for him now that he has also experienced being the first to cross the 100-mile mark in Auburn, California.

"I remember being at the finish line at Western States last year just watching," he added. "I remember seeing the winner come in, and just how electric the environment was and then to be there this year and it being me doing that, it was a surreal moment. It was hard to believe."

Peterman felt like the first 30 or 40 miles was the roughest part of his 100-mile trek through the Sierra Nevada Mountains at the Western States 100 last weekend.

The next 60ish miles though, that's when he really started feeling right.

"I really didn't feel very good the first couple hours," he said. "I don't know what that was about, but I was definitely running slower than I would have thought I was going to. Then I got into running with some people and found my groove, and I say about mile 40 I worked out the kinks and was feeling a lot better.

He won by 33 minutes and looks the part of a fast-rising star in the sport.

After the race, he said he didn't have his cell phone. However, once he got to it Sunday morning, he found about 300 text messages and countless calls and social media messages congratulating him.

Messages came from Missoula community members, from fellow pro runners and from former collegiate teammates. His win was noted a handful of times at Sunday's Missoula Marathon as Anders Brooker, Peterman's high school coach at Hellgate, made sure to note the win over the public address during the half marathon.

The win is the latest in what has been a meteoric rise for the young pro, who has now won all five of the ultra runs he has completed. He doesn't seem to lose, joining a small class of runners to win the Western States 100 in their debut attempt — ultra running legend and multi-time Western States champ Jim Walmsley needed three tries before his first win in the race. Peterman became the first male runner since Chuck Joins in 1986 to win the race in their debut try.

In the last year alone, Peterman's list of wins is, plainly put, insane. He won the Speedgoat 50K with a course record, won the JFK 50 Miler with the second fastest time ever, snagged a Chuckanut 50K win in a course record and won the Canyons 100K with yet another course record time.

But despite the wins, despite the added attention from running media — writer David Roche dubbed Peterman a "Petergod" and "the god next door" in a recent story — and fellow pros, he's taking things in stride. He has always been a humble winner to those around him. He is never too high when things are good; never too low when things are bad.

He holds respect for the Western States course that legends of the sport have run on before him. From a crowded start line, he said, his thoughts were a bit jumbled as he struggled to wrap his mind around the fact he was there to compete.

It was daunting that he was about to try for 100 miles, but adding the competition layer added some pre-race jitters.

The moment was huge. It was a race he has worked long to be at, one he was ecstatic to run in but had a goal and drive to win even if many pre-race predictions had the 26-year-old tabbed in fourth or fifth at the end.

Peterman ran his race, stuck to his game plan of not showing up and blowing up immediately. He played it patient. He was also all smiles in each photo media like iRunFar.com had of him.

"I had a great time out there and was smiling, but there were plenty of moments of just grinding," he said.

It's a hot course, one dubbed the "Western States killing machine" for its high 90 and 100 degree temps so he chose to go out a bit slower. To combat the heat, Peterman also took each chance he could for a dousing of ice water to cool himself off at aid stations dotted across the route. While some runners would skip those chances, Peterman made sure to hit them even if for a quick cool down to keep his body temp in check and the heat at bay.

The pivotal moment in the race came when Peterman finally reached leader Hayden Hawks. Peterman and Hawkes were neck and neck running together just after mile 73, from the Foresthill section to the "Six Minute Hill" to a river where the two were in an intense and technical spot. Peterman came out ahead after a doubletrack climb of a couple 100 feet, he never looked back the final 20 or so miles to the end.

At mile 94, he was told he had the win. He raced the final mile with his crew, his dad and Clark in a moment he won't forget.

"It was so cool, dude, running with your friends, family and whole crew," he said. "Everyone is cheering and it was definitely my favorite part of the race it was really special.

Peterman is taking July off and won't run any formal races. He hopes to snag an invite to the World Mountain Running Championships 40K in Thailand, and the California International Marathon in hopes of getting his Olympic Trials Qualifier.

Whatever he runs for next, based off his recent track record, good things may keep coming for Peterman.

Lance Hartzler covers Griz men's basketball and prep sports for the Missoulian. Follow him on Twitter at @lance_hartz or shoot him an email at Lance.Hartzler@406mtsports.com.

Adam Peterman holds the tape at the the finish line of the 2022 Western States 100-mile endurance race last week in California.