Virus in brief: Projections for US death toll trending downward. Get caught up on the latest developments.

'It was the worst feeling': Helena Capital girls, other AA state semifinal teams react to cancelled tournament
1 comment
Share this
× 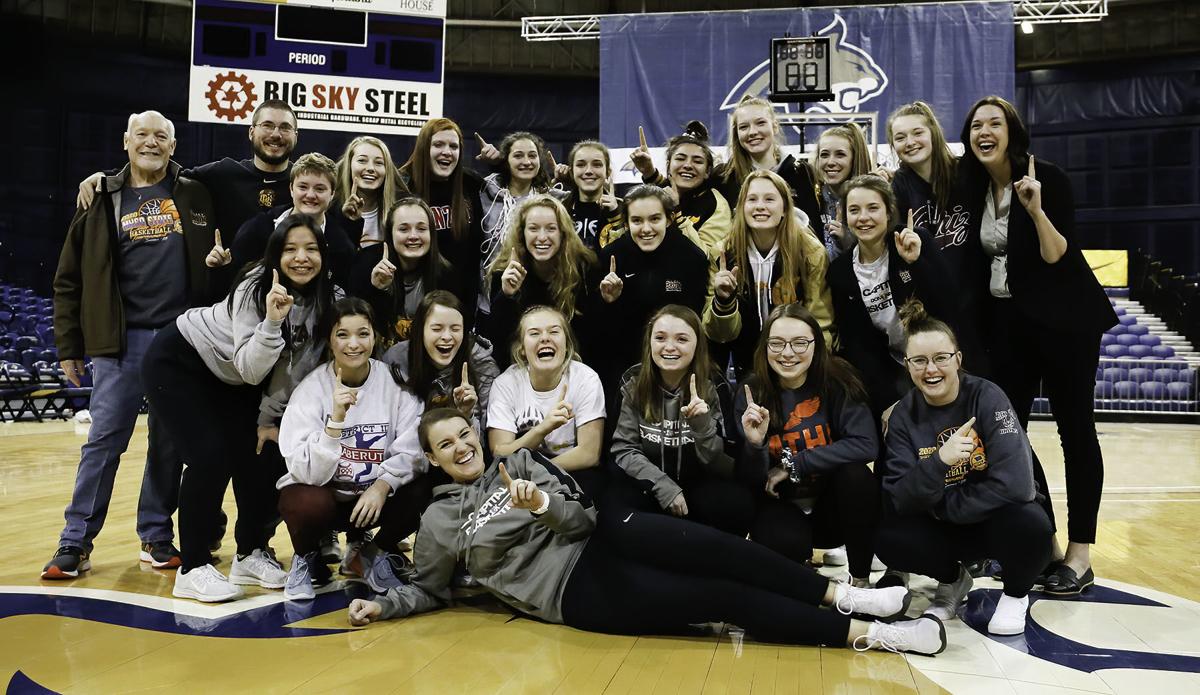 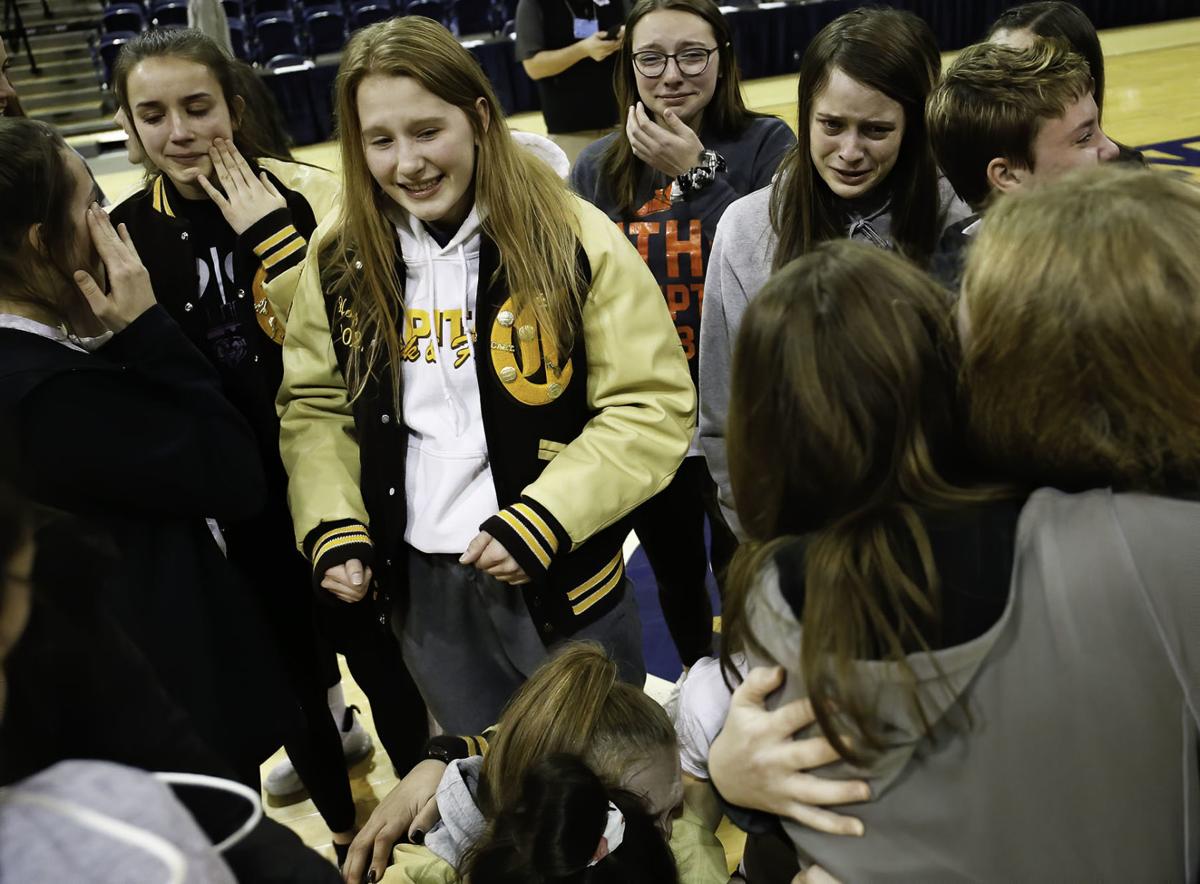 The Helena Capital girls basketball team stand together at the Brick Breeden Fieldhouse after they heard the news the MSHA cancelled the AA state tournament because of confirmed cases of the coronavirus in Montana. Capital was named co-state champions with Billings West.

BOZEMAN — Helena Capital coach Katie Garcin-Forba received the news and she led her team back to the field house one last time.

She wanted to give her team one last time on the court to relish their accomplishments.

Garcin-Forba knew her job Friday night wasn’t about x’s and o’s. It wasn’t about making them better basketball players. It was about being there for her girls when they needed her the most.

The Montana High School Association cancelled the final day of all state tournaments after four cases of coronavirus were confirmed within Montana. The Bruins and Billings West were supposed to meet Saturday night in the finals.

The players’ collective mood took a sudden turn from flying high to flabbergasted. What had just happened?

No athlete deserves that kind of news.

“Everyone was sort of silent,” Capital senior Mashayla O’Malley said. “We all just kind of broke down in each other’s arms.”

Back at the Brick Breeden Fieldhouse on the campus of Montana State University, the Missoula Hellgate boys basketball team had just beaten Billings Skyview in its semifinal game.

The players were having the same exact feeling that Capital was having.

“We finished undefeated, and it looks like we just lost a state championship like we did last year,” Hellgate coach Jeff Hays said. “We are heartbroken right now.”

Hays looked over at his team who huddled around the baseline. The players’ faces also told the story as tears started to form. Some of them embraced, still unable to believe what had just happened.

Hellgate senior Abe Johnson slowly walked up to talk to the media and, before a question was even asked, he spoke up.

“This is the (worst) interview I have ever been a part of,” Johnson said. “We weren’t prepared for this. After the season we had, and knowing how much we love each other, just to hear that news is not fair.”

Skyview returned to the court as both teams shook hands. No one told them to, they knew they were feeling the same disappointment.

“Everyone has a mutual respect for one another,” Skyview coach Kevin Morales said. “I’ve traveled with a bunch of these kids with our AAU teams and I know it’s tough on them. It’s tough on everybody”

The MSHA and parents took photos of the team one last time, but people could tell that the players’ smiles and excitement weren’t real. What was real was one of the players crouching down and sobbing.

Montana high school basketball is just one example of the many sporting events all over the country that have been cancelled because of the coronavirus pandemic.

The NBA, MLB, NHL and PGA have all suspended their seasons.

But, while public safety is an immediate concern, players want to know why they suited up on Thursday in the first place.

“We didn’t expect them to just stop suddenly like that,” Hellgate senior Rollie Worster said. “To stop before the final game like that is just…I don’t know. We shouldn’t have even started if it was just going to come to this.”

With all the disappointment echoing through the arena, Hellgate had had enough. It was time to celebrate; they were state champions, after all.

So, Kade McWilliams grabbed a pair of scissors, climbed up on his teammates shoulders and, much to the chagrin of officials from Montana State University’s athletic department, cut down the net.

He raised it over his team and, for a moment, life was injected into the somber ending to the high school basketball season.

“We are going to cut the damn nets down,” Hellgate football coach Mick Morris said. “If (Montana State) wants to send us a bill, they can send us a bill.”

“It sucks for the kids. Obviously, there is a lot more going on around the world. I just wish our kids could have gotten a chance (to play). I don’t think there is any doubt about who the best basketball team in the state of Montana is.”

When Capital returned to the court, there were no nets to cut down. The tears started up again, but the players sat in their circle and cheered one last time.

“It was the worst feeling,” Capital’s McKinlee Mihelish said. “My heart just sank into my stomach.”

Garcin-Forba and her girls tried to up the mood by putting on a TikTok dance video.

“It’s disappointing,” Garcin-Forba said. “We wanted to play that last game but I told the girls we got redemption. We beat the one team that beat us this season and we ended with a win. I think that’s important."

The Bruins are returning most of their roster, including all-conference forwards Paige and Dani Bartsch, who will get another shot at the trophy. Garcin-Forba joked that next year’s motto will be ‘erase the asterisk’, but there was nothing to hang their heads about this season.

“We are going to celebrate these kids and this championship,” Garcin-Forba said. “We just have to figure out the best way to do that.”

But, for seniors like O’Malley and Mihelish, this was their final shot.

The pain and disappointment will pass, and if their new friends or college teammates ask if they have ever won a high school state championship, they will just smile.

“I’d rather compete for it,” Mihelish said. “But we definitely deserved it.”

The Bartsch twins helped Capital win a co-state championship and now they share being Player of the Year on the All-Area Girls Basketball team.

Parker Johnston earned his second All-Area Player of the Year award this season, while four Bruins total made First-Team All-Area.

Games will be played June 12 at Sheridan College and June 13 at Rocky Mountain College.

"I have been around a lot of great people who have impacted my life in a positive way, so that's the No. 1 thing I will remember." - Peterson said.

Worster and Five both led their teams to co-championships in basketball.

"Looking back at it now, I'm really glad we ended on a win. Especially on a win that kind of epitomizes how we were as a team." - Johnston said.

"Looking back at it now, I'm really glad we ended on a win. Especially on a win that kind of epitomizes how we were as a team." - Johnston said.

The Helena Capital girls basketball team stand together at the Brick Breeden Fieldhouse after they heard the news the MSHA cancelled the AA state tournament because of confirmed cases of the coronavirus in Montana. Capital was named co-state champions with Billings West.