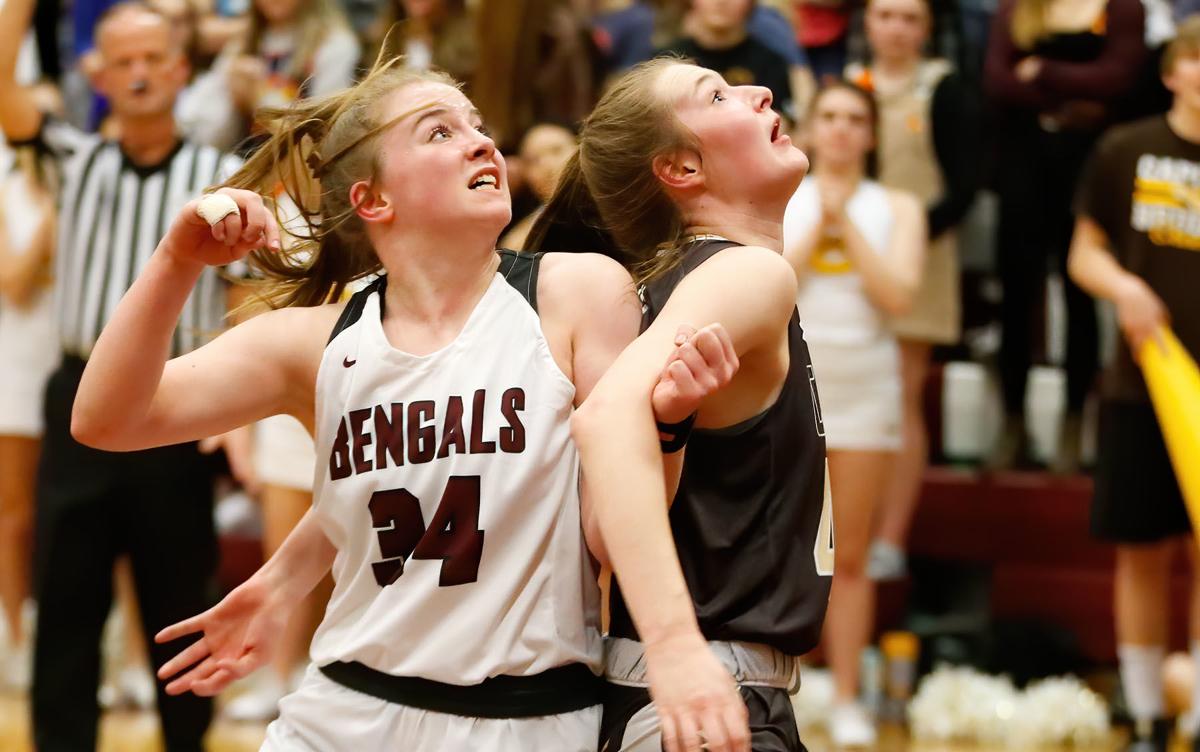 Caroline Bullock and Dani Bartsch battle for a rebound during crosstown basketball last weekend in the Jungle. Both girls basketball teams will celebrate senior day this Saturday. 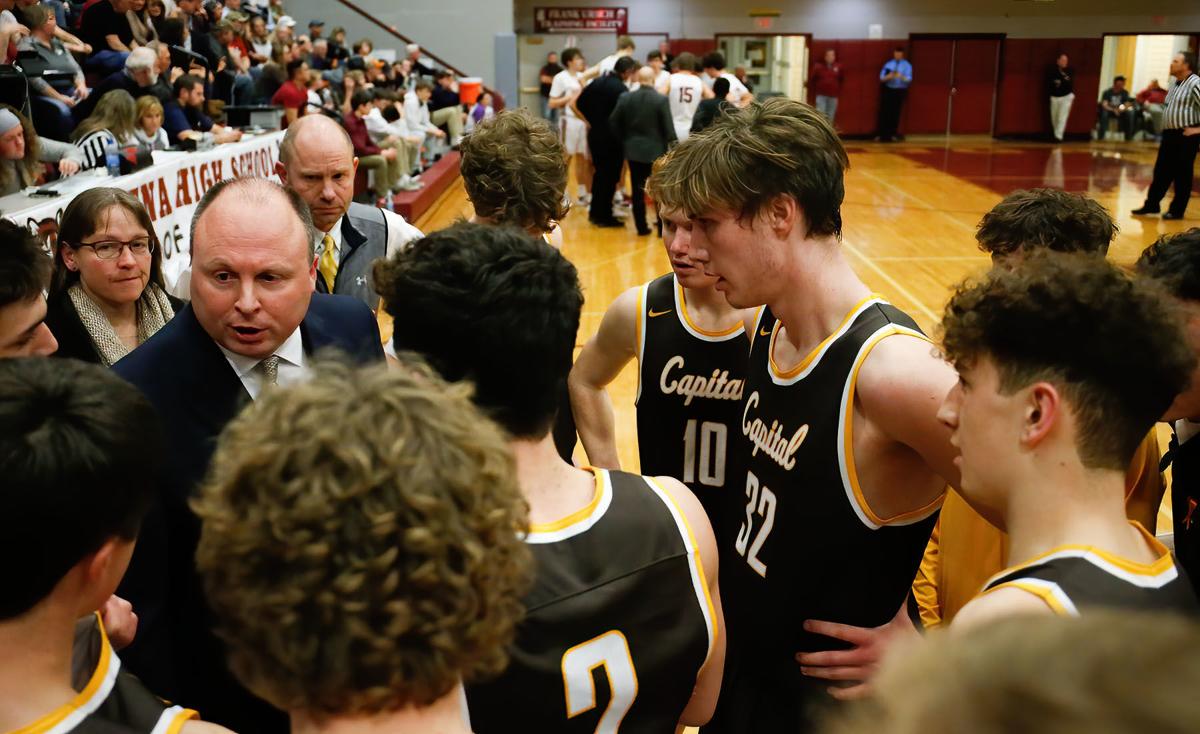 HELENA -- It might be hard to believe that the final week of the regular season has already arrived in Class AA basketball, but in every other classification, divisional tournaments are already underway.

So for all intents and purposes, postseason basketball has arrived.

That's also partly true when it comes to the Western AA standings as both boys and girls teams are jockeying for position in the final week of the season, which will determine seeding at divisionals next week, as well as the best possible path to the state tournament.

And looking ahead to the final week for both Helena High and Helena Capital, as well as the rest of the Class AA, here are five things to watch including some postseason scenarios, the amazing Paige Bartsch and senior day for the Bengals and Bruins.

Both boys basketball teams will be on the road against Kalispell Glacier and Flathead this weekend, but the Bruins and Bengals girls teams will each be at home Friday and Saturday.

Helena will host Flathead Friday night, before welcoming Glacier into the Jungle for senior day on Saturday. McKayla Kloker, Riley Thennis, Caroline Bullock, Abby Marcille, Mariah English and Emily Feller will each be honored and will look to close out their home careers with a win.

Capital will also be honoring a group of four seniors Saturday against Flathead at 2 p.m., after taking on Glacier Friday. Mashayla O'Malley, Aryana Ridlon, Sloane Chapman and McKinlee Mihelish will be playing their last game at the Bears Den, where the Bruins have been undefeated so far this season.

As far as seeding for the Western AA girls tournament, Helena High still has work to do as far as locking itself into the 4-5 matchup.

Heading into the weekend, the Bengals are in fifth place and one win this weekend will guarantee a finish no worse than that. Helena plays Kalispell Friday night (7:15) and then Glacier on Saturday (2 pm). With a win Friday, the Bengals will be good to go for fifth, but if they win out and if Capital beats Glacier Friday night, they could finish 7-7 and maybe as high as fourth.

Either way, there is a strong likelihood that Helena and Glacier will see each other in the opening round of the tournament next Thursday.

The same thing could happen on the boys side of things. Helena and Glacier go into the final week tied at 5-7 and in fourth place. Butte is one game back at 5-8, so the Bulldogs are in the mix too, but the Wolfpack and Bengals could see each other twice in five days too.

What will Paige Bartsch do next?

When the final stats were in the book for the girls crosstown game last week, Paige Bartsch was credited with 12 points, nine rebounds and eight blocks, which is a pretty incredible stat line.

Even though Bartsch didn't quite get there, it was an extraordinary effort and it's the kind of performance the Bruins have been getting more frequently from the 6-foot-4 Bartsch, who leads the Western AA in blocks and rebounds. She is also the most efficient scorer in the state in terms of points per field goal attempts.

Simply put, if Class AA kept an efficiency rating, the junior's would be off the charts thanks to her dominant play on both ends of the floor.

The focus for Capital and Bartsch this weekend will be locking down the Western AA regular-season title and the top seed at the Western AA Divisional, where the Bruins will be the defending champs.

Capital boys go for season sweep in Kalispell, No. 2 seed

Missoula Hellgate already had the No. 1 seed locked in the Western AA, but the two spot is still up for grabs between Helena Capital and Missoula Sentinel.

The two teams split during the regular season but Capital will get the tiebreaker with a larger margin of victory. That's if the two finish with the same record.

Sentinel has just one game left against Butte and is sitting at 10-3. But if the Bruins can beat Flathead on the road Friday, followed by Glacier Saturday, two teams they beat earlier in the season in Helena, they will be the second-seeded team at divisionals, as well as winners of three in a row to close the regular season.

Both Helena teams have struggled closing games out this year and taking on Glacier again is a reminder of that.

The girls team lost a five-point lead with just over 30 seconds left in Kalispell to the Wolfpack before losing on a late shot. The boys also had a lead in the fourth quarter that they let slip away, so that will be something to watch this weekend.

"We can beat top teams in this conference, " Helena boys coach Brandon Day said after the loss to Capital. "We are in these games, we can play with Capital and Sentinel, it's just whether or not we can close it out."

Both teams have looked like state tournament teams at times this season, but are still searching for the consistency needed for both programs to make repeat appearances at the tournament next month in Bozeman.

McKayla Kloker caught fire and the Bengals were dominant on the defensive end in a rout that locked them into the 4-5 matchup at divisionals.

"It's kind of crazy," Thennis said of senior day approaching. "I wouldn't have wanted to do it with any other coaching staff or any other teammates."

It was an exciting weekend of crosstown competition between Helena High and Capital, but the best moment had nothing to do with basketball.

Helena High came out swinging in crosstown boys basketball, but it was Capital the landed the knockout blow.

Above the Fold Episode 1

After beating Flathead Saturday, the Capital girls clinched the Western AA regular-season title and the top seed at divisionals.

Divisional week has arrived for Capital and Helena High. Here are the brackets and pairings for the Western AA which starts Thursday in Missoula.

Caroline Bullock and Dani Bartsch battle for a rebound during crosstown basketball last weekend in the Jungle. Both girls basketball teams will celebrate senior day this Saturday.