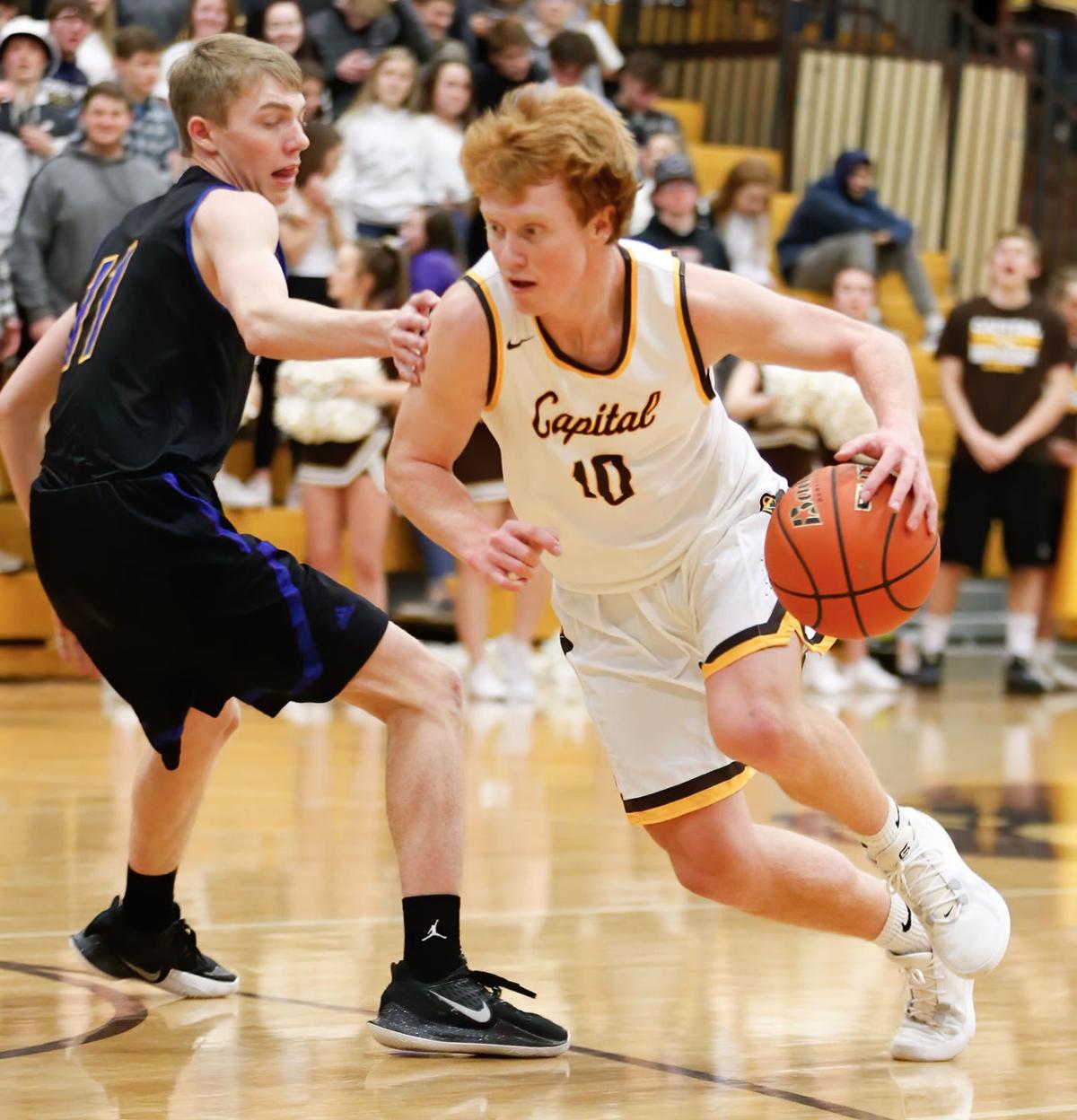 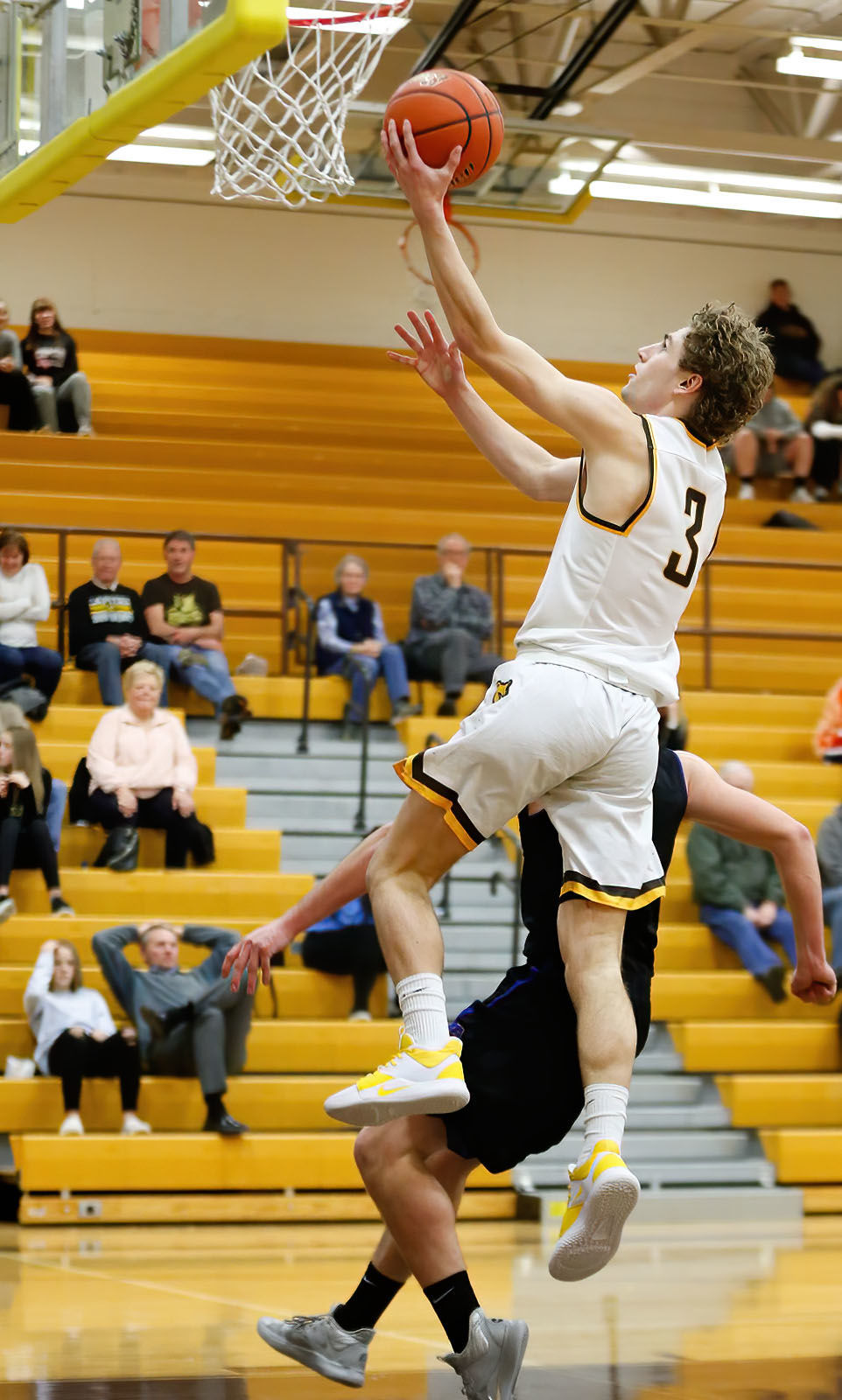 Helena Capital’s Ryan Quinn drives to the hoop for a layup Tuesday night in Helena.

Helena Capital’s Ryan Quinn drives to the hoop for a layup Tuesday night in Helena.

HELENA — You hear it all the time. “Sometimes you just need to see the ball go through the net to get your confidence back,” some announcer says on ESPN-whatever. But how much truth is there to that cliché? Tuesday night’s game at the Bears Den in Helena sure seemed to be proof to this overstated hypothesis as the Helena Capital Bruins routed the Big Sky Eagles 72-44.

For the first six minutes of the game, the Bruins (5-2) looked lethargic. Were they peaking ahead to their showdown with second-ranked Missoula Sentinel on Saturday? Big Sky's Everett Fred was making it very difficult on the low blocks, both offensively and defensively. Turns out, Capital just needed to see a shot go down.

“We finally got the lid off and everyone took a breath,” said Bruins coach Guy Almquist. “The game was so slow early on, and give them credit, (the Eagles) were being very patient in the half court — I think — intentionally. We were just a little rushed.”

After Trevor Swanson sank a jumper from the elbow to give the Bruins their first two points Big Sky answered right back to make it 8-2, but little did the Eagles know, their lead was about to evaporate in the blink of an eye.

A pair of Kaleb Metzger free throws allowed Capital to gather itself and set up its full-court press. Ryan Quinn immediately stole a pass and took it the other way for a layup. Another layup by Metzger tied the game and the Bruins had a 12-8 lead at the end of the first quarter.

“I think it was big for us to make that little run in the first quarter, to get ahead, relax and then we just played,” Almquist said.

Almquist was ecstatic with the spark that Quinn, Metzger and Malachi Syvrud provided off the bench to get the Bruins out of their funk to start the game.

“Metzger, Quinn and Malachi coming off the bench about halfway through that first quarter was a huge thing, and that was big for us to have them kind of jumpstart us,” Almquist said.

Capital’s ball movement was a thing of beauty. Each pass was crisp and made with a purpose. And perhaps most importantly, each sequence ended with an open look that was turned into two, three or four points. During the Bruins’ 24-point second, Birdger Grovom converted a four-point play. Not to be out done, in the midst of a 22-point outburst third quarter by the Bruins, Swanson completed a four-point play of his own.

“The way we’re playing, we have to have a lot of ball movement,” Almquist said. “We have to turn the ball side to side, and early on it was sticking a little bit. We weren’t quite sharing it like we need to. Once we got into the open court a little bit we started playing more confidently, and we started seeing the ball go in — that’s a big deal for us — and we go those eight-to-10-nothing runs.”

Swanson and Grovom led all scorers with 17 and 16 points, respectively.

Josh Hiniker paced the Eagles with 10 points which included a pair of 3-pointers. Fred added eight points. Not one Big Sky player attempted a free throw.

The fifth-ranked Bruins host No. 2 Missoula Sentinel on Saturday at 4 p.m.