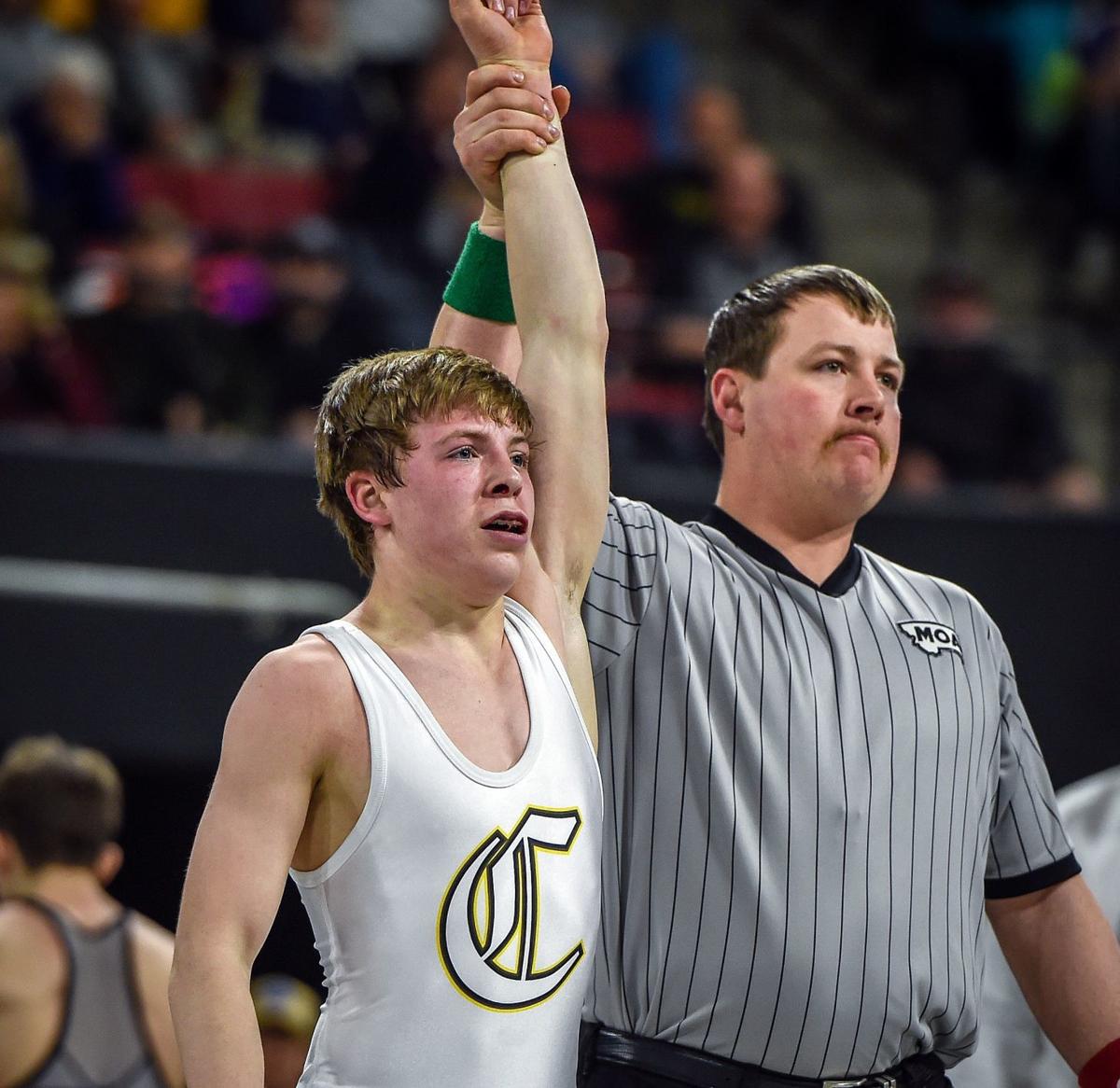 Helena Capital's Carson DesRosier raises his arm in victory after winning the Class AA 120-pound championship during the state wrestling tournament at the Rimrock Auto Arena at MetraPark in Billings last year. 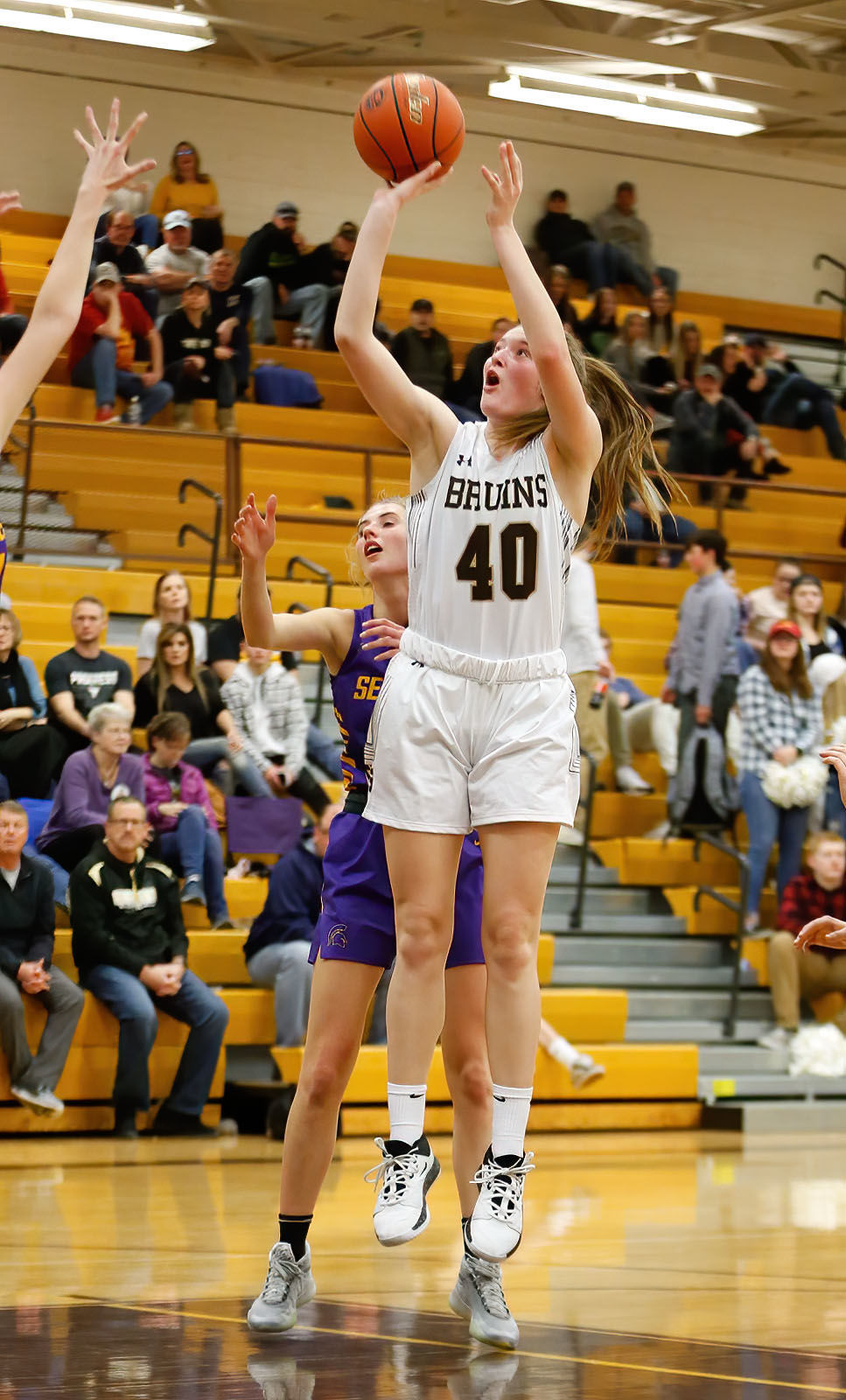 The postseason for high school wrestling is short and at times, it can be unforgiving.

A season of preparation all comes down to how wrestlers perform over the next two weeks, as divisional tournaments will take place across Montana on Saturday as wrestlers aim to qualify for the All-Class State Tournament in Billings, Feb. 13-14.

For Helena High and Capital, the postseason starts right here in Helena as the Bengals will host the Western AA seeding tournament in the Jungle.

The first matches will get underway at 11 a.m. Individuals need to finish in the top-8 of their weight class in order to qualify for the state tournament.

While team points will matter next week in Billings, this weekend is all about qualifying individuals and no team score is kept.

"We are hoping to get 15-18 kids through to state," Capital head coach Jeff Mahana said. "We think that would be a solid number."

On top of reaching state, getting a quality seed is essential and the better you place, the better seed you get — meaning the wrestlers who win Saturday will be atop their bracket in Billings.

Capital was fifth a year ago at the state tournament and returns state champion Carson DesRosier, who has just one loss in Class AA competition this season. Noah Kovick, who is 21-2, comes in as the top-ranked wrestler at 182 pounds. He finished third at state a year ago.

Helena High will have 24 wrestlers in the meet. Ian Mehrens, a freshman that was 8th at the Jug Beck in January, is one Bengal that should advance to state, along with a number of others.

The tournament is double elimination.

Capital boys aim for an upset

Outside of road losses to Billings West and Missoula Hellgate, the Helena Capital boys basketball team has rolled through its schedule. It continued that Thursday night by smacking Butte around after burying 15 3-pointers.

Trevor Swanson and Bridger Grovom combined for 47 points. As a team, Capital is third in Class AA scoring 65.3 points per game. The problem for the third-ranked Bruins is that on Saturday, they host No. 1 Hellgate, which leads Class AA in scoring offense (67.7) and scoring defense (41.2).

With individuals stars such as Rollie Worster and Abe Johnson, as well as a scoring margin of plus 26.4, Capital will have its work cut out. Yet, with the way the Bruins shoot the three and the fact that they have the second-best point differential in Class AA (14.6), winning at the Bears Den should be anything but a cake walk for Hellgate. Tip-off is at 3:30 p.m.

The No. 1 Helena Capital girls improved to 12-0 Thursday night after holding Butte High without a single point for 11 minutes to open the game. The Bruins also held the Bulldogs to just one point in the third quarter.

Yet, Butte shouldn't feel bad. Capital allows just 34 points per game to opponents, which is tops in Class AA.

But that defense will be tested against Missoula Hellgate (10-2), the No. 3 team in Class AA. The Knights first loss came at Capital in January and Thursday night, they lost at the hands of Helena High.

In the first matchup, Dani Bartsch took over inside, along with her sister Paige Bartsch as Capital took over No. 1. Mara McGinley also caught fire from deep, connecting on four 3-pointers.

Hellgate will counter with Bailee Sayler and Addy Heaphy, but getting the best of the Bruins and their defense won't be an easy task. Start is set for 4:15 p.m.

The Brothers Kovick: Capital brothers Noah and Conner chase their mat dreams together

Wrestling isn't a sport for everybody. But from the moment Noah and Conner Kovick stepped onto the mat, it was a perfect fit.

Carroll College signee Jadon Lamb is among nine Townsend wrestlers that will head to the Class B-C state tournament this week. Jefferson will send five.

Helena Capital's Carson DesRosier raises his arm in victory after winning the Class AA 120-pound championship during the state wrestling tournament at the Rimrock Auto Arena at MetraPark in Billings last year.