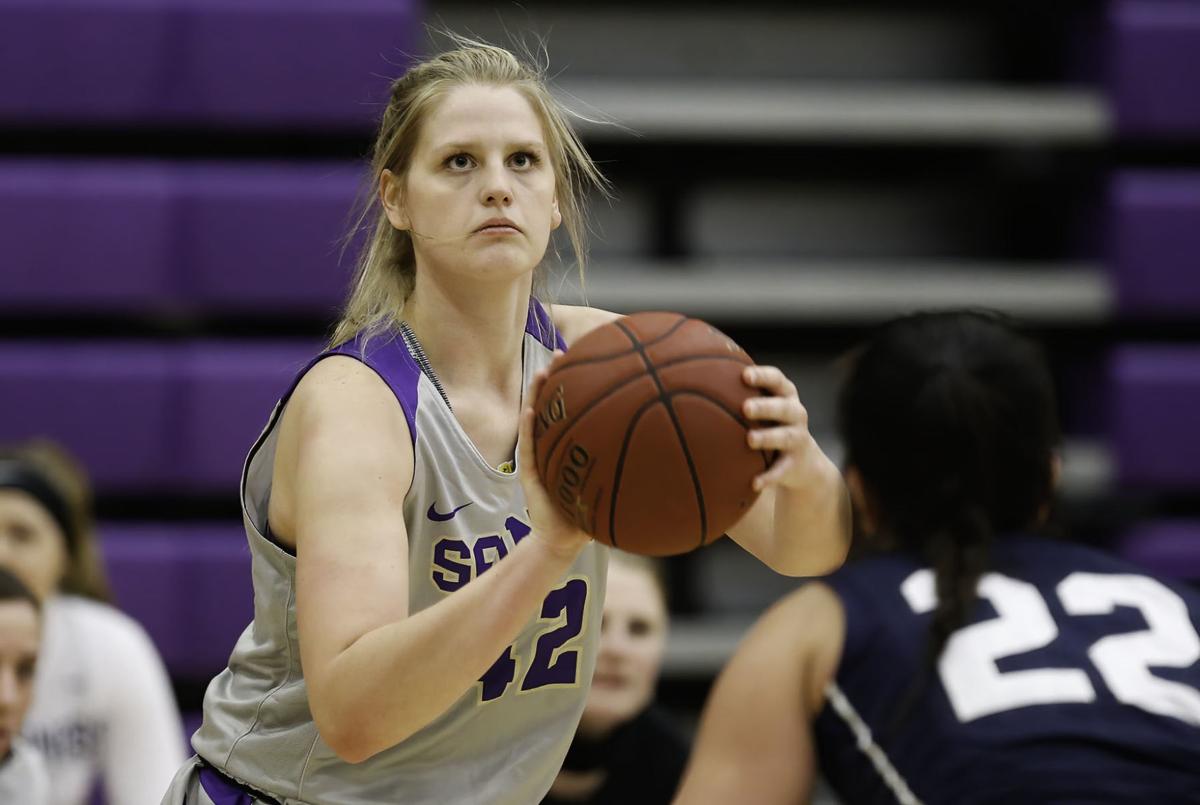 Jamie Pickens lines up a 3-point shot for Carroll College during the Saints 92-57 win over Dickinson State Friday night in the Helena native's debut. 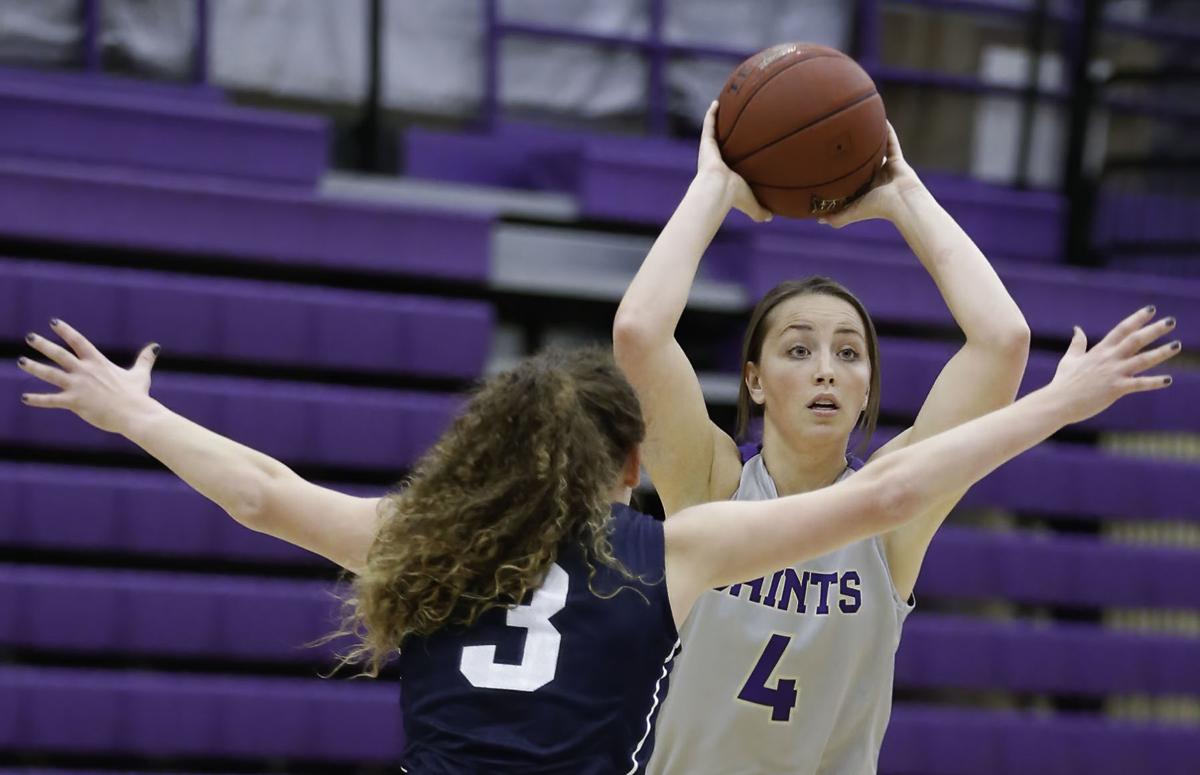 Danielle Wagner of Carroll College basketball looks to pass during a win last Friday night for Carroll over Dickinson State. 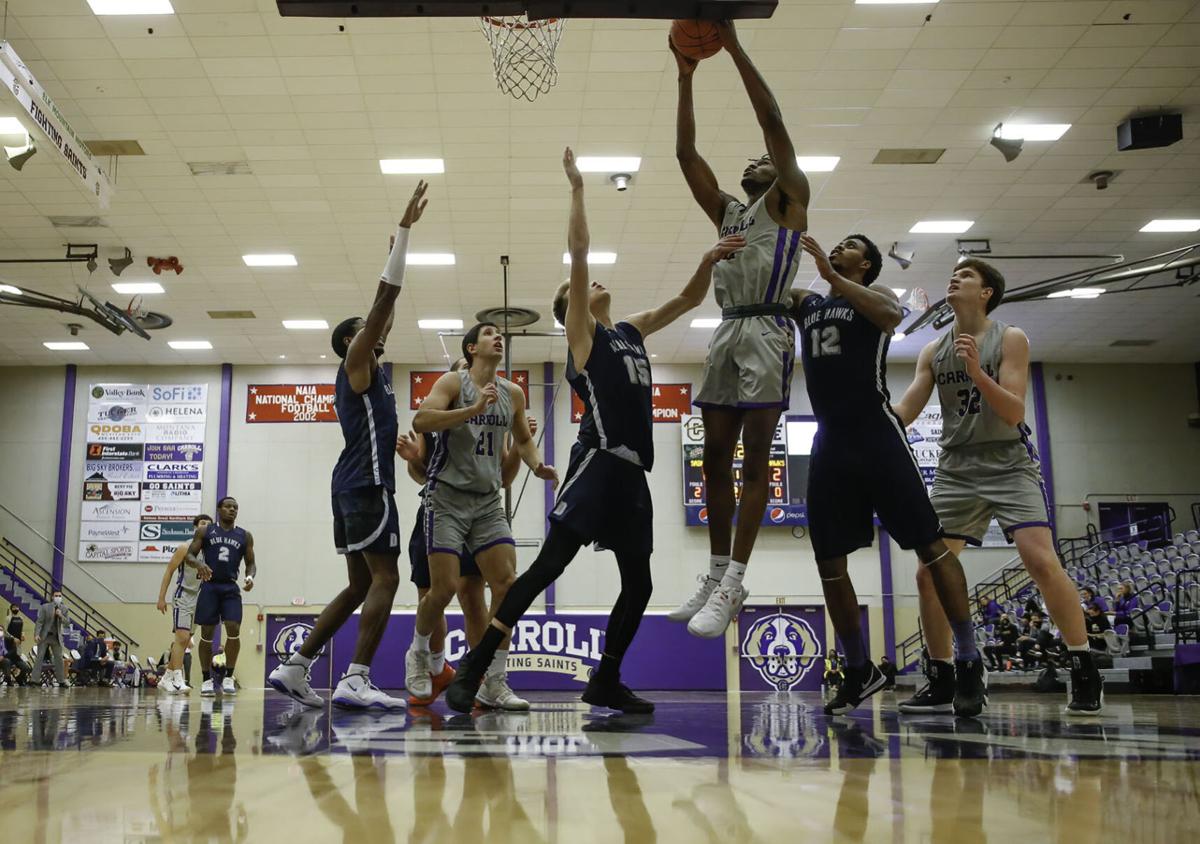 Ifeanyi Okeke goes up for a bucket for Carroll College Friday night at the PE Center against Dickinson State. The Saints won 77-61.

HELENA — It wasn't like any basketball game you have ever been to. There weren't roars after made 3-pointers or during lineup introductions, but hoops returned to Helena and the PE Center Friday night.

And even though the atmosphere was different, both teams were successful in their home openers as the Carroll College basketball teams defeated Dickinson State handily in non-conference action.

The women's team took the floor first and in the return of Helena native Jamie Pickens, who transferred from the Lady Griz, the Saints cruised to a 92-57 win over the Blue Hawks. The men followed it up with a 77-61 win of their own.

"It was a very special moment," Pickens said of her first home game with the Saints. "I can remember going to these games growing up and watching the starting lineups and to have my name announced, it kind of was surreal."

She also described what it was like without fans.

"It was a bit odd," Pickens said. "I have always played close to home, so it was weird not having my parents there. We just knew we had to bring a lot of energy tonight and I thought we did that."

A hot start from the 3-point line certainly helped and Sienna Swannack drilled four of five attempts from deep in the first half as Carroll built a 30-10 lead at the end of the first quarter and a 50-27 advantage at intermission.

As a team, the Saints were 7-of-11 from beyond the arc in the first 20 minutes, while shooting 52 percent total. Dickinson State, on the other hand, was held to 34 percent from the field for the half and the game.

"Just being able to play is a win," Carroll head women's basketball coach Rachelle Sayers said. "We don't know what the future is going to look like and winning is the icing on the cake, but really just getting these kids the opportunity to get out on the court is the biggest thing."

In just their third game of the season, the 20th-ranked Saints (3-0) put together a stellar offensive outing that featured four double-digit scorers and a 52-percent shooting performance as a team, including (11-of-20) 56 percent on 3-pointers.

Maddie Geritz was the high scorer for Carroll, finishing with 17 points off the bench on 5-of-9 shooting. She also grabbed five rebounds.

Danielle Wagner connected on three triples as she scored 15 in the win. Christine Denny added 13 points and a team-high six rebounds; Swannack finished with 12 and Pickens wound up with seven. Carroll assisted on 20 of its 35 field goals.

"I liked the way that we shared the basketball," Sayers said. "I thought our kids did a great job of making the extra pass and recognizing that their teammates had open looks."

Courtney Olson was the leading scorer for the Blue Hawks with 20. Ashlie Watts also contributed with 14.

In the men's game, Carroll was able to eventually salt away a double-digit win but it wasn't easy. The Saints built a 36-23 advantage in the first half, thanks to a defensive effort that limited Dickinson State to 27 percent shooting from the field.

But early in the second half, Carroll went cold and that allowed the Blue Hawks to claw their way back in, at one point, drawing within five at 46-41.

That's when Shamrock Campbell, the reigning Frontier Conference Player of the Week, decided to take over.

Following a fade-away jumper, Campbell drilled a three and after an offensive put back by Jovan Sljivancanin, the lead was back to 10.

Campbell connected on two more jumpers, including two more from beyond the arc in the last two minutes, as the Saints held off DSU and wrapped up the 16-point win.

"We knew going into the game that Dickinson was going to double Jovan a lot," Carroll men's head coach Kurt Paulson said. "And we prepared him for that and told him to look for Shamrock and Dennis and those guys were able to make some plays. A lot of guys stepped up and we were able to hold them off."

Campbell scored 10 of his 16 points in the second half and he was responsible for four of Carroll's six 3-pointers. Sljivancanin also had another productive night, scoring a game-high 19 points in addition to grabbing nine rebounds and dishing out five assists.

"It was a big effort just to play this game," Paulson said. "There were a lot of extra protocols and a lot of extra work. We want to thank our university for allowing us to play this game and for everyone that helped make it happen. It was great that we got to play at the PE Center and I thought we played pretty well. We got the lead on them and never gave it up."

No. 21 Carroll is now 3-0 on the season and will play at Dickinson State again next Saturday before opening Frontier play Dec. 5 at Montana Tech.

The Saints women are set to be back in Helena next Friday and Saturday against Corban and Valley City University. They will also open Frontier play in Butte Dec. 5.

Cha-ching: Carroll shreds Lewis-Clark State, No. 18 Oregon State up next

Carroll demolished its old Frontier Conference rival Saturday thanks to a 53-9 run and now, the Saints will turn their attention to Oregon State.

Carroll made quick work of Valley City State in the Thanksgiving Classic and will now prep to face an old rival on Saturday in LC State.

The Carroll College women's basketball team will be back in action Friday as part of a two-day tournament in Helena.

Carroll made quick work of Valley City State in the Thanksgiving Classic and will now prep to face an old rival on Saturday in LC State.

It will be a homecoming of sorts for Jamie Pickens Friday, as both Carroll basketball teams make their home debuts against Dickinson State.

For the first time in eight months, the Carroll men's basketball team will hit the floor Friday night and as the No. 21 team in the country.

Jamie Pickens lines up a 3-point shot for Carroll College during the Saints 92-57 win over Dickinson State Friday night in the Helena native's debut.

Danielle Wagner of Carroll College basketball looks to pass during a win last Friday night for Carroll over Dickinson State.

Ifeanyi Okeke goes up for a bucket for Carroll College Friday night at the PE Center against Dickinson State. The Saints won 77-61.