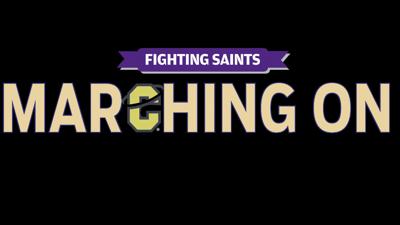 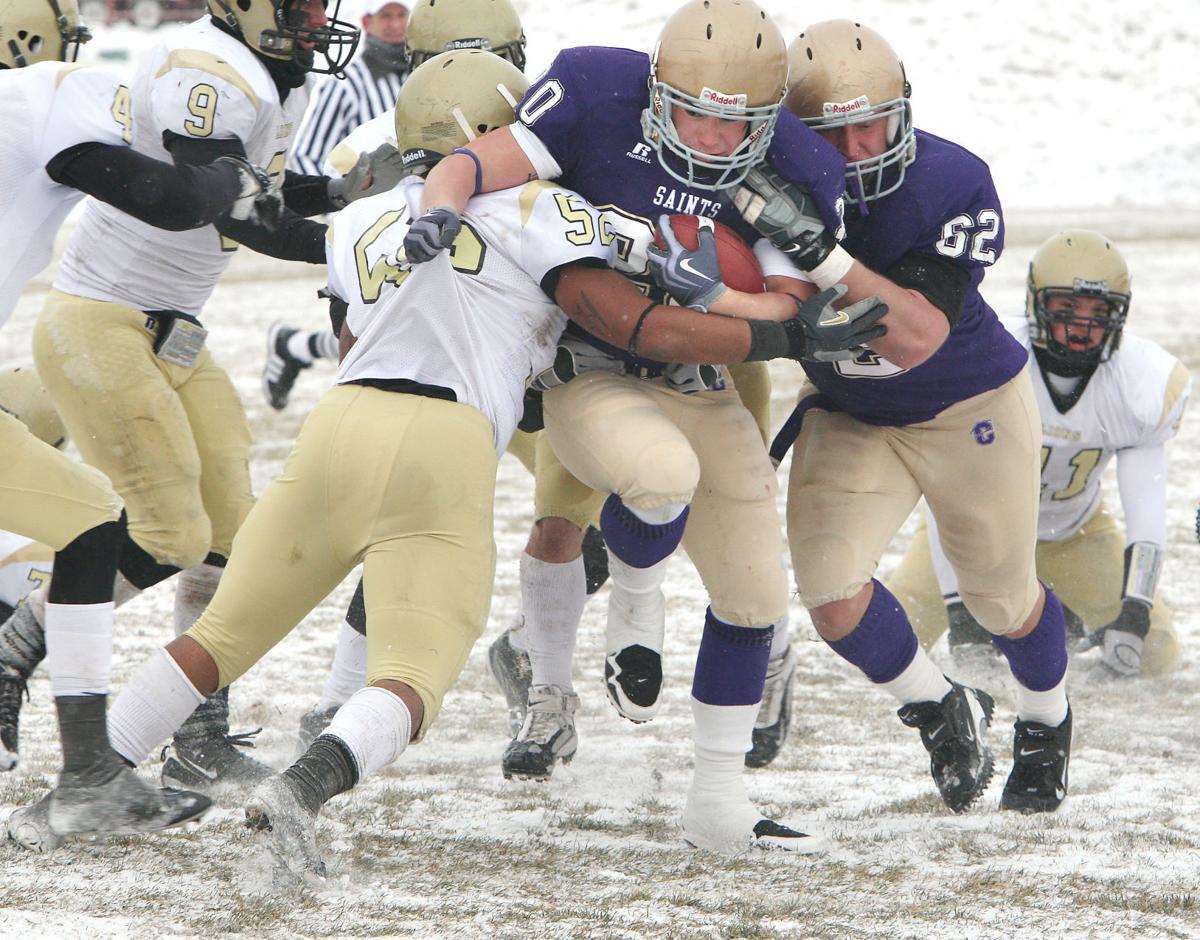 Carroll's Gabe Le is stopped after a good gain by Lindenwood's Chris Howard during the second half of their game Saturday afternoon at Nelson Stadium. 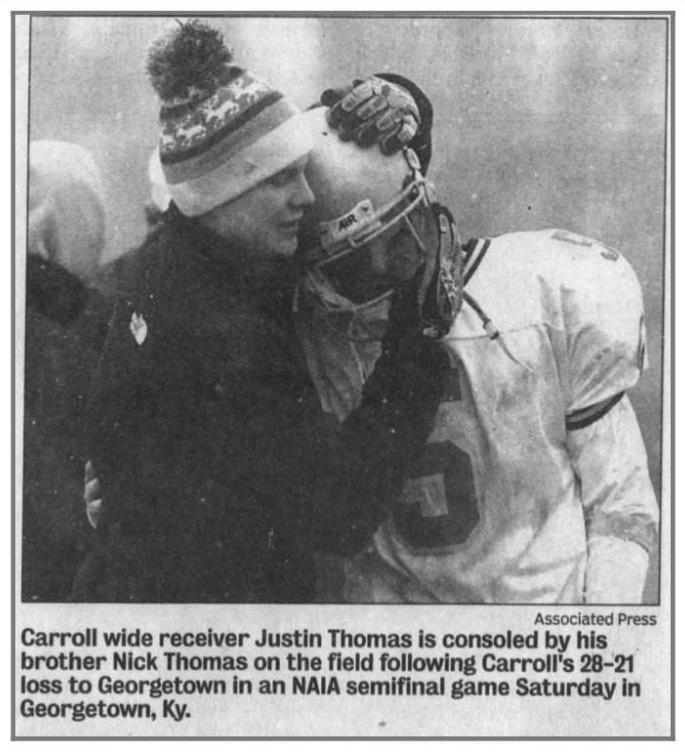 Carroll wide receiver Justin Thomas is consoled by his brother Nick Thomas on the field following Carroll's 28-21 loss to Georgetown in the NAIA semifinal game in Georgetown, Kentucky. 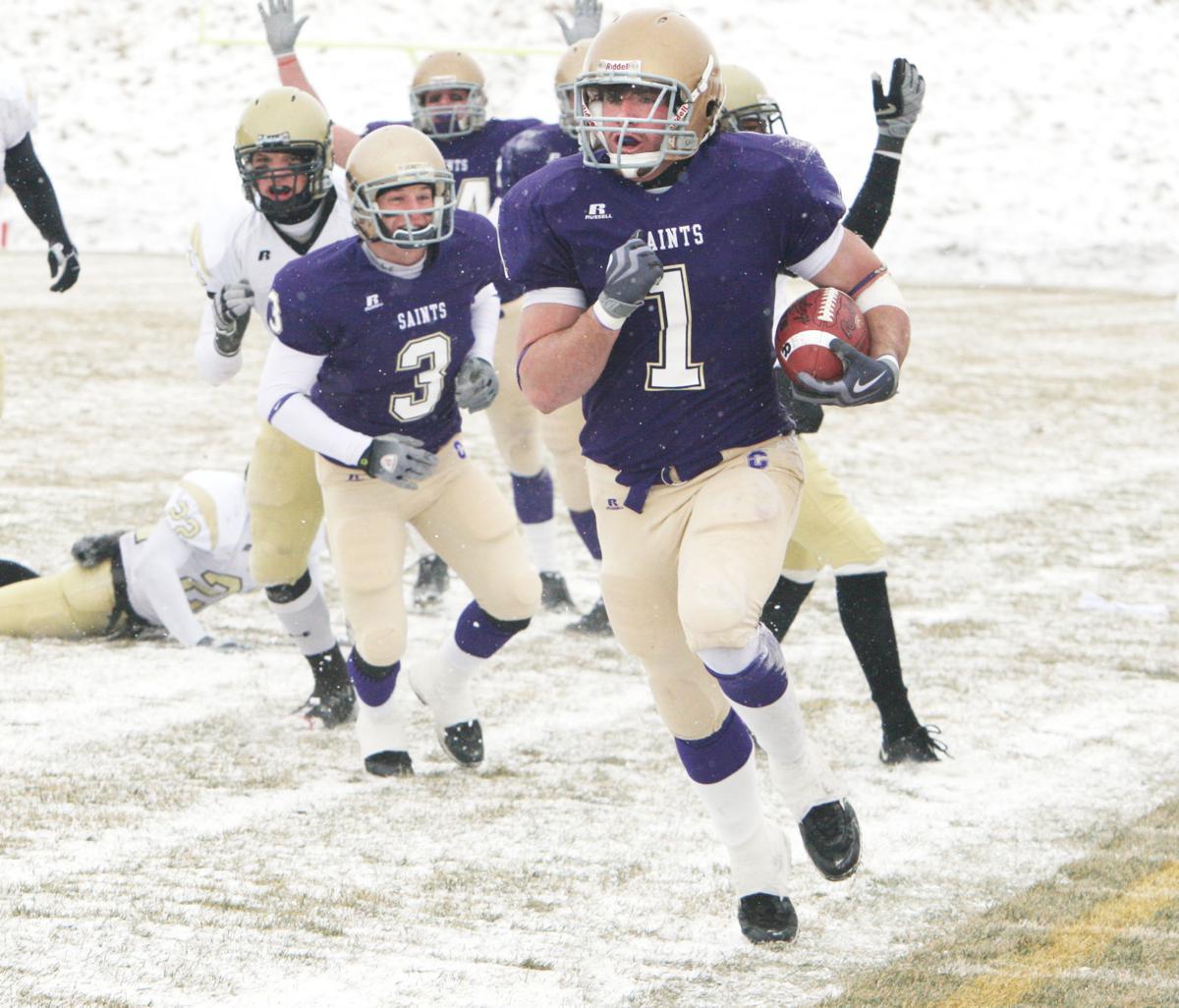 HELENA — Mike Van Diest has started a new chapter in his life.

He retired as the Carroll College head football coach, and now waits patiently through the COVID-19 pandemic to get started as a linebackers coach for the University of Mary, an NCAA Division II program in Bismarck, North Dakota.

But he can’t help but think about the past.

He doesn’t want to forget his former players.

And there are so many memories.

There are his 203 wins, the 14 Frontier Conference championships and, of course, you can’t forget the six national titles.

But in all of the accomplishments, there are two teams Van Diest never wants to leave out of the conversation because, as he says, have always been close to his heart.

The 2000 and 2009 teams might be separated by almost a decade, but they were building blocks in a foundation that was eventually sculpted into a dynasty.

Despite falling short of a national championship.

He established a new culture, brought in a new offensive coordinator, debuted what would be the iconic 3-4 defense and even replaced the uniform that some of his players had jokingly dubbed the “Purple People Eater”.

By the end of his second year, Van Diest couldn’t have imagined where the team would end up.

It was two wins away from the school’s first football championship.

“We didn’t have many seniors. We had Casey Fitzsimmons and some others coming back but with the next group of guys, we didn’t know how we’d do,” Van Diest said.

Carroll lost two of its first three games and, after a loss to Montana Western in Dillon in week 6, the Saints were sitting at a mediocre .500.

“It was tough,” Van Diest said. “It just took the wind out of our sails.”

But Van Diest knew his team was determined.

Carroll put together seven consecutive wins, the program’s longest winning streak since 1989, to make it to the NAIA National Semifinals.

The journey saw a double overtime win over Montana Tech during subfreezing conditions to claim a Frontier Conference championship and then upset Valley City State and Huron (South Dakota) in the NAIA playoffs before falling to the eventual National Champion Georgetown (Kentucky) 28-21.

Quarterback J.D. Emmert completed 58 percent of his passes for 197 yards and two touchdowns, but the Tigers scored what would be the game winning touchdown with seven minutes left in the fourth quarter.

“These guys - J.D. Emmert, (linebacker) Joe Horne and (wide receiver) Justin Thomas - never got to complete in a championship game, but these guys together was such an amazing group,” Van Diest said. “There were plenty of national championship teams but that team really has a special place in my heart. They were one of the first to really buy into our staff and what we were trying to do.”

The Saints arrived back in Helena that night around 3 a.m. It was dark and cold. But when Emmert and his teammates stepped off of the plane, he said they were greeted by more than 100 Carroll fans.

He was tired but he still managed a smile.

“After that, they certainly just took off with it,” Emmert said. “But we got the ship turned in the right direction.”

Finishing without a ring

Over the next few years, Emmert, Horne and Thomas went on to graduate.

As his big brother, he knew there was going to be some sibling banter and he was okay with that.

“Often, people still ask me if I played on those National Championship teams and I tell them no, but looking back I’m just happy to have played with a good group of guys,” J.D. Emmert said. “A year prior to Coach Van Diest, Carroll finished a season with one win. I think it’s incredible to see a program turned around that quickly.”

“It was a little bit hard to watch, but I was also happy,” Thomas said. “I was excited to watch those games because that brotherhood (with your teammates) is always there.”

Deep down, he knew he was one of the building blocks for the foundation that held up later teams.

“I felt vindicated,” Thomas said. “People might overlook us but, looking back, it was kind of historic, this group of guys coming together and finishing where we did. At that time, it was kind of weird to see Carroll in the National Semifinals but it meant a lot to us.”

As the years went on, Carroll not only continued to win, but was expected to win. The Saints won their fifth National Championship in 2007 but missed out on a sixth title in 2008 after a loss to Sioux Falls in the championship game.

The 2009 team looked like it was primed for a sixth running over opponents in the regular season.

But on a cold December day, during a national semifinal match against Lindenwood, the Saints walked off their home field defeated.

It was only the second time in the Van Diest era that the Saints had lost a home NAIA football tournament game.

“We were talented that year,” Van Diest said.

The Saints were loaded with an offense that included running backs John Camino and Gabe Le, who ran for nearly 1,000 yards apiece, and quarterback Gary Wagner, who threw for 27 touchdowns and was intercepted just five times.

The difference came down to a single touchdown that Lindenwood threw in the fourth quarter.

“There are a couple of plays I still think to this day that I knew I should have made,” Wagner said. “I just didn’t execute.”

Shane Van Diest, Mike Van Diest’s oldest son, who moved from the secondary to linebacker that season, said it was definitely a team that underachieved, at least under Carroll’s standards.

“I think we had some of the key players where we knew we should have been playing for a national championship,” Shane Van Diest said. “A lot of people forget how close that game was.”

“I don’t think it was a shock, but it was a disappointment,” Shane Van Diest said.

Mike Van Diest has coached plenty of Carroll football teams that blossomed with different personalities. The 2000 and 2009 teams are prime examples.

“2009 was a veteran group. We were coming off of a lot of success,” Mike Van Diest said. “The 2000 team didn’t have a lot of national success. We were still trying to put players in the right place.”

But what if these two teams had come through? Would it have been possible?

“I look at some of the moves I made as a coach that I maybe could have called a different play,” Mike Van Diest said. “These two teams were as good as any in the country. I just would want to win one for some of these guys, like J.D. Emmert and Joe Thomas.”

J.D. Emmert looks back on his time with Carroll and the history of the football program. He said another trophy or two wouldn’t have made a difference. The impact that Van Diest had, not only on the university, but on the community as a whole, was something that was already cemented.

But that doesn’t change the fact that Emmert still wishes he had that ring.

“Of course I would have loved to win one,” he said. “But looking back on it, we were the foundation.”

Marching On: Carroll’s all-time leading rebounder Emili Woody comes into her own on and off the court

Former Carroll women's basketball player Emili Woody talks about the challenges of developing her style of basketball and being a proud member of the LGBTQ community.

The Saints 2020 schedule has now been finalized and will begin Sept. 12

Ryan Kuhn: Will Carroll football’s schedule help or hinder the Saints in 2020?

HELENA — You have no say in the cards you are dealt when you sit down at a poker table.

Carroll's Gabe Le is stopped after a good gain by Lindenwood's Chris Howard during the second half of their game Saturday afternoon at Nelson Stadium.

Carroll wide receiver Justin Thomas is consoled by his brother Nick Thomas on the field following Carroll's 28-21 loss to Georgetown in the NAIA semifinal game in Georgetown, Kentucky.