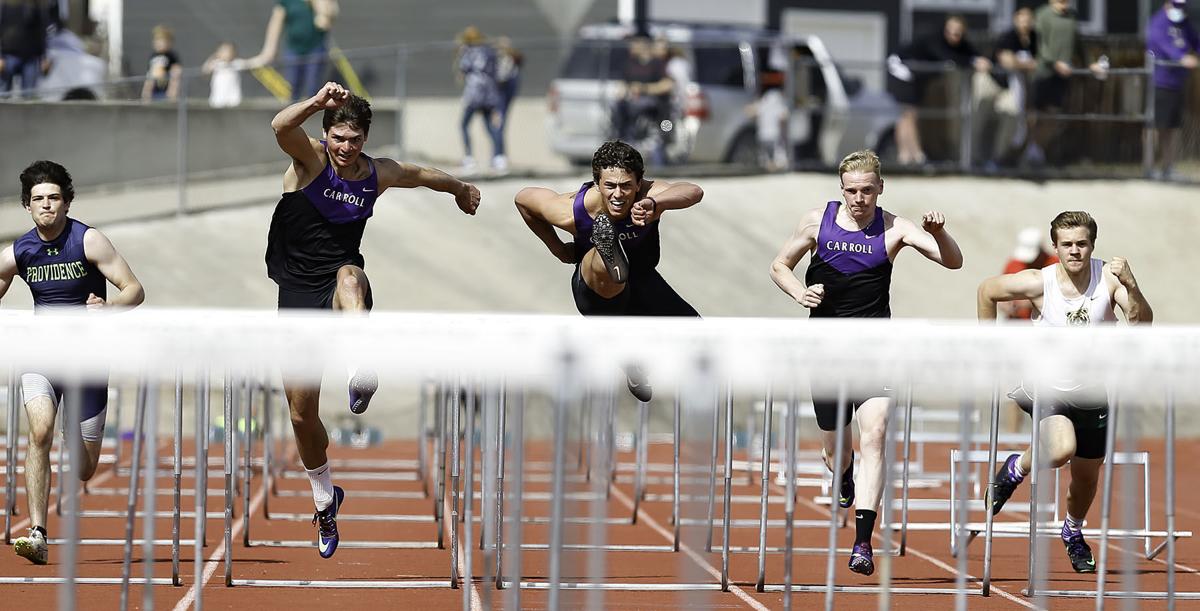 Athletes from Carroll, Providence and Rocky Mountain College compete in the men's hurdle event on Friday during the Frontier Conference Championship Meet in Helena. 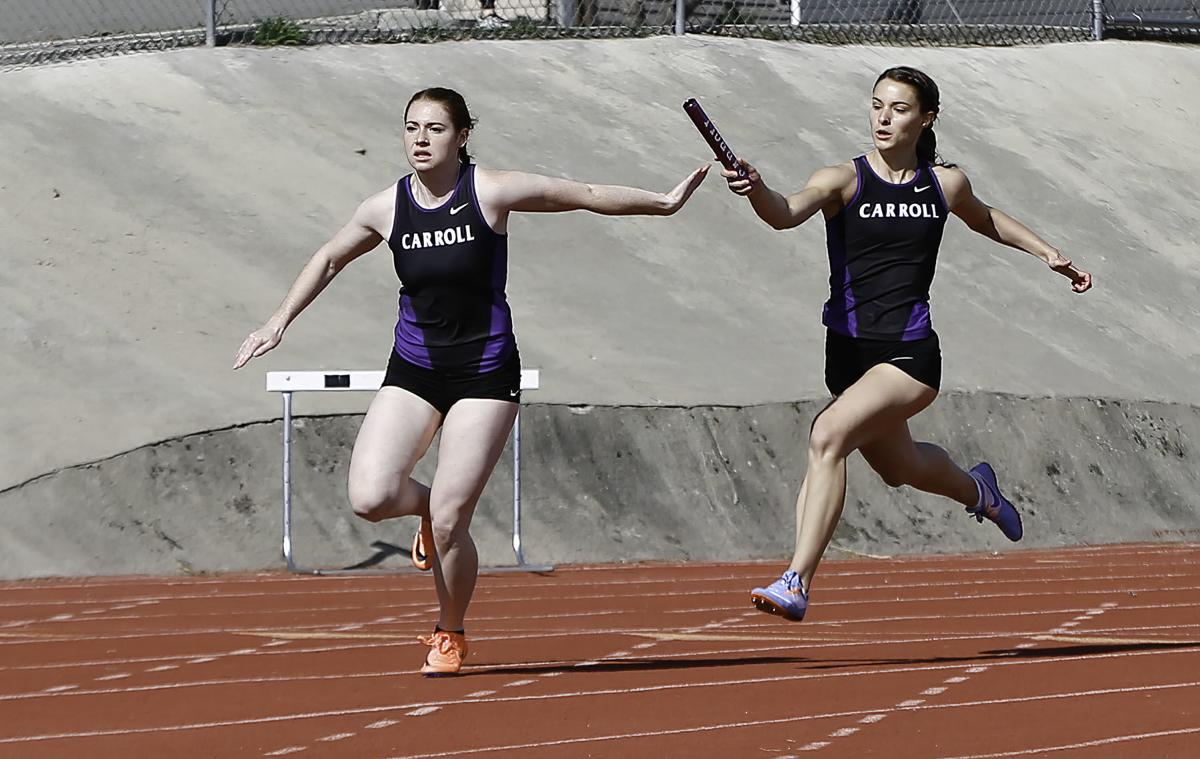 A Carroll relay team competes during an event at the Frontier Conference Championship Meet on Friday in Helena. 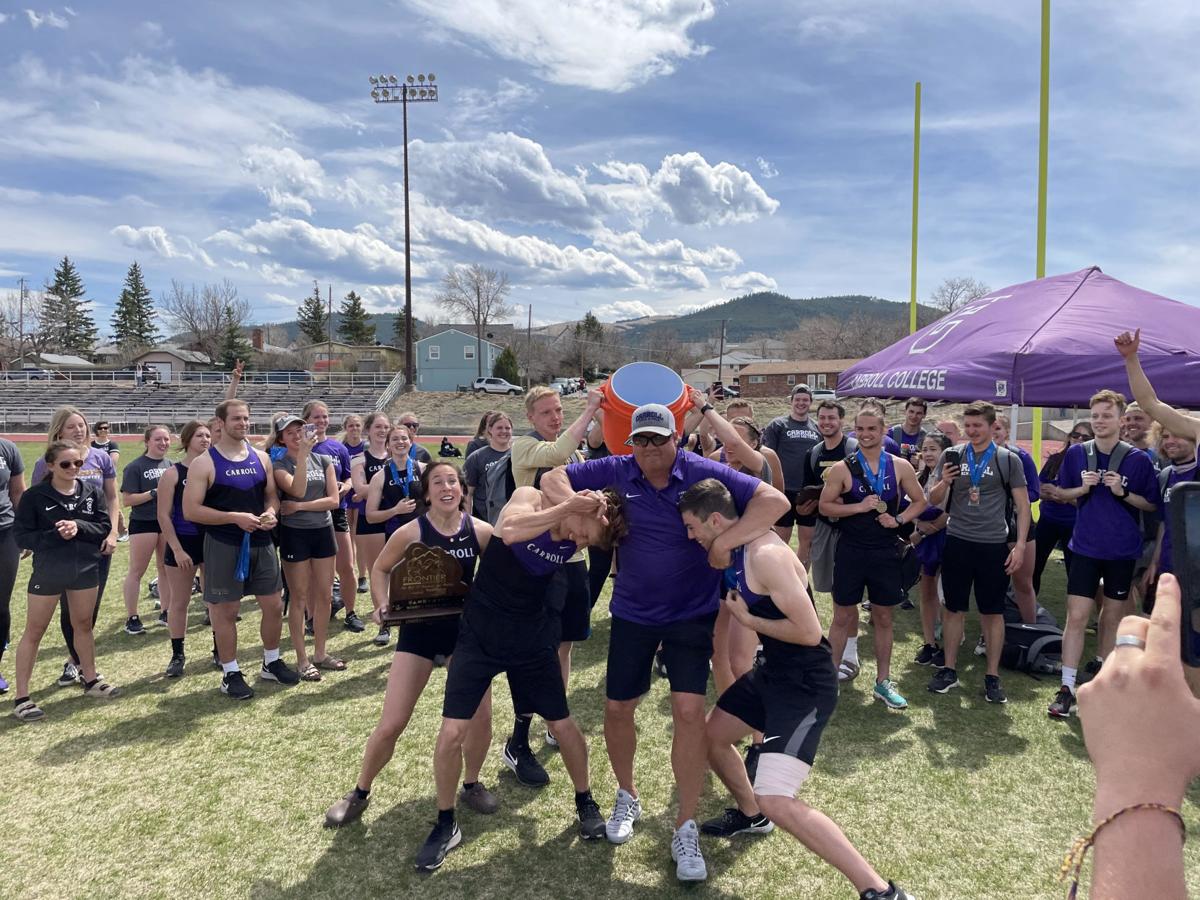 Carroll track and field head coach Harry Clark gets a water bath after his teams won the Frontier Conference Track and Field Championships on Friday. 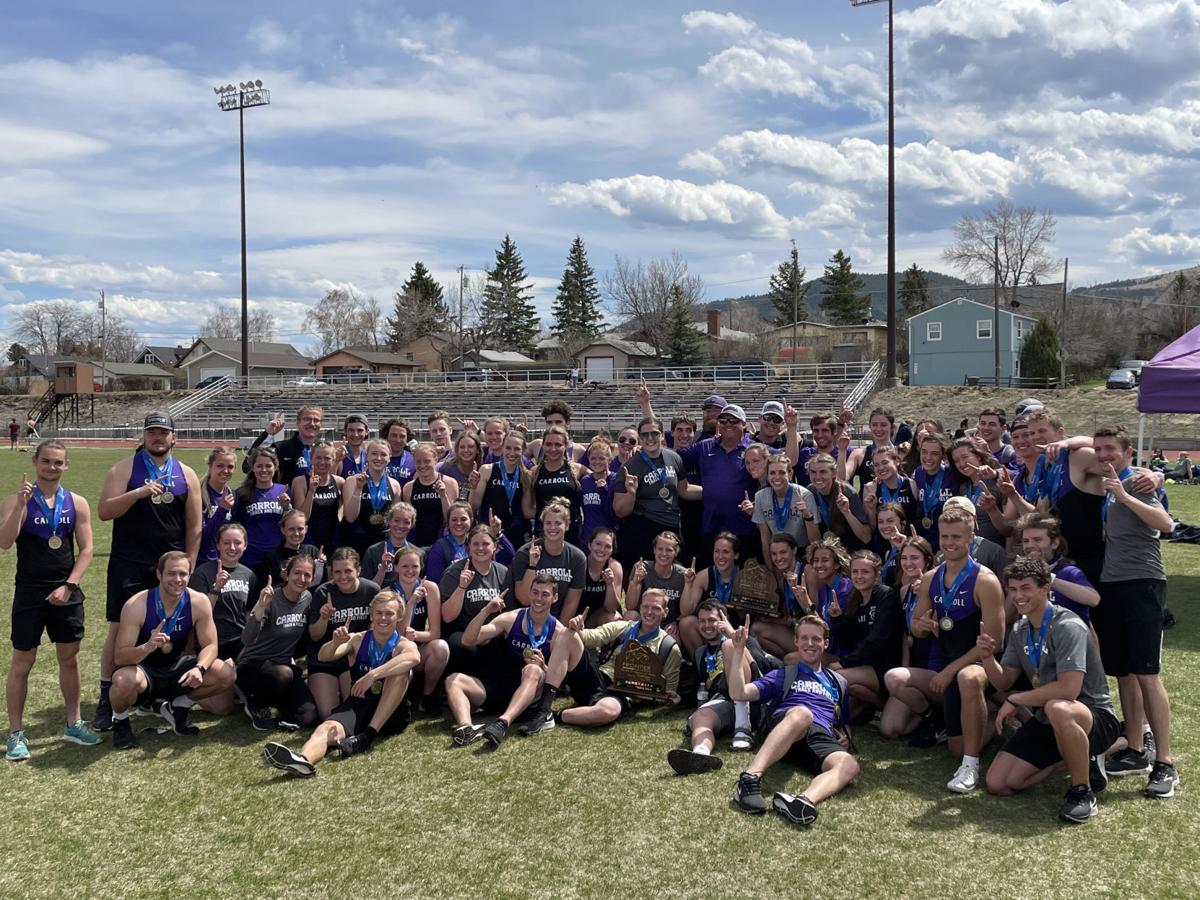 Carroll's men's and women's track and field teams gather with their trophies after winning the Frontier Conference Track and Field Championships on Friday.

HELENA — For the first time in more than a quarter century, the Frontier Conference crowned track and field champions. On a beautiful, warm and clear day at Vigilante Field in Helena, Montana, both Carroll men’s and women’s track and field teams hoisted the conference championship trophies after collecting nearly 600 combined team points.

“It’s a long time coming, I’m super proud of these kids,” Saints head coach Harry Clark said. “From what we went through last year and this year with lack of meets, they’ve all kept their heads up and worked their butts off to have something like this. To see all these smiles on all these faces, it’s awesome.”

The Carroll men collected 272 points during the two-day event. Rocky Mountain College finished with 152 points, Providence with 92, Montana Tech with 30 and Montana Western with 21.

On the women's side, Carroll cruised to a championship with 309 total points, besting the Battlin' Bears who finished second with 113 points. Providence's women's team got third with 74 points, while Tech and Western finished fourth and fifth with 30 and 23 points, respectively.

Carroll won three events on the first day of the meet on Thursday and capped off the championship by winning the men’s 4x400 meter relay by nearly 10 seconds. The only thing louder than the sound of the medals banging together that donned the Saints’ necks were the shouts by Clark as he was getting a water bath by his team after the meet.

“They all put their spikes on and their throw shoes and got it done and that’s all we could ask for,” Clark said of his players. “Look at the weather, you have one day it’s nice and look at what happens, you get great performances and lots of smiles. Just had a lot of fun today.”

While times will continue to be finalized, Clark said at least four more athletes from Carroll earned trips to the national meet, joining the women’s 4x800 meter relay team from Thursday.

Thrower Garrett Kocab narrowly missed qualifying with his 15.31 meter attempt in the shot put, coming up just four centimeters short of accomplishing the feat. Kocab, however, captured that event and also won the men’s discus with a throw of 49.82 meters.

“It’s fun, just to come out here and do what I could do. Four centimeters away from the B [qualifier] for shot [put], so a little disappointed, but at the end of the day, I’ll take 50 feet...That felt pretty good,” Kocab said of his discus throw. “I think that matches my PR from two years ago during my sophomore season. It felt good, a nice warm day. It’s fun to be out here.”

Carroll took three of the four throw events on Friday and three of six overall for the meet.

“We had some personal goals that we might not have achieved exactly what we wanted personally, but as far as team scoring in the throws, I felt very good about what we achieved this weekend...This meet to me was more about not my top-level kids, but all my other guys and gals that just work so hard and haven’t had a championship meet before,” Carroll throws coach Jimmy Stanton said. “To see them, almost to a person, show up with their PR throws and to do what they did today, that was one of the best things I’ve had in coaching in a long, long time.”

While Carroll was regarded as the favorite going in, the opportunity for track and field athletes to compete for championships and medals can not be understated. Providence, who finished third in the meet collectively, had a national qualifier in the women’s javelin.

McKenzie Clark bested the field by more than 10 meters with a 42.22-meter throw, a mark that should be good enough to get her into the top-10 nationally.

“This is fantastic that we finally have a Frontier Conference meet,” Providence assistant coach Alan Cress said. “We’ve been talking about it for a long time and I’m so glad that Carroll got it put together and we’re able to come here. We competed really well. Everybody stepped up and had a lot of personal best marks...We’re moving up, we’re getting better and it’s right when we need to.”

“Pretty exciting to see a Frontier meet back,” Battlin’ Bears coach Steve McMorris said. “Carroll’s teams are both pretty strong, but we’ve been improving as a squad and I think the point totals at the end will show that. Good day to have it. We’ve seen some great performances out of our young athletes today. We had a couple school records today. Our relays did pretty well and our throwers went up to Great Falls [Thursday] and scored 30 points collectively.”

Tech and Western rounded out the field of teams in fourth and fifth place, respectively for the two-day event.

“We’ve been waiting for this meet for a while now, so just great to be here,” Western head coach Dylan Zitzer said. “Really happy to be here...We certainly had some bigger goals than what we accomplished, but just awesome to be at a meet like this. We didn’t have any individual champions, but maybe next year.”

Athletes from Carroll, Providence and Rocky Mountain College compete in the men's hurdle event on Friday during the Frontier Conference Championship Meet in Helena.

A Carroll relay team competes during an event at the Frontier Conference Championship Meet on Friday in Helena.

Carroll track and field head coach Harry Clark gets a water bath after his teams won the Frontier Conference Track and Field Championships on Friday.

Carroll's men's and women's track and field teams gather with their trophies after winning the Frontier Conference Track and Field Championships on Friday.