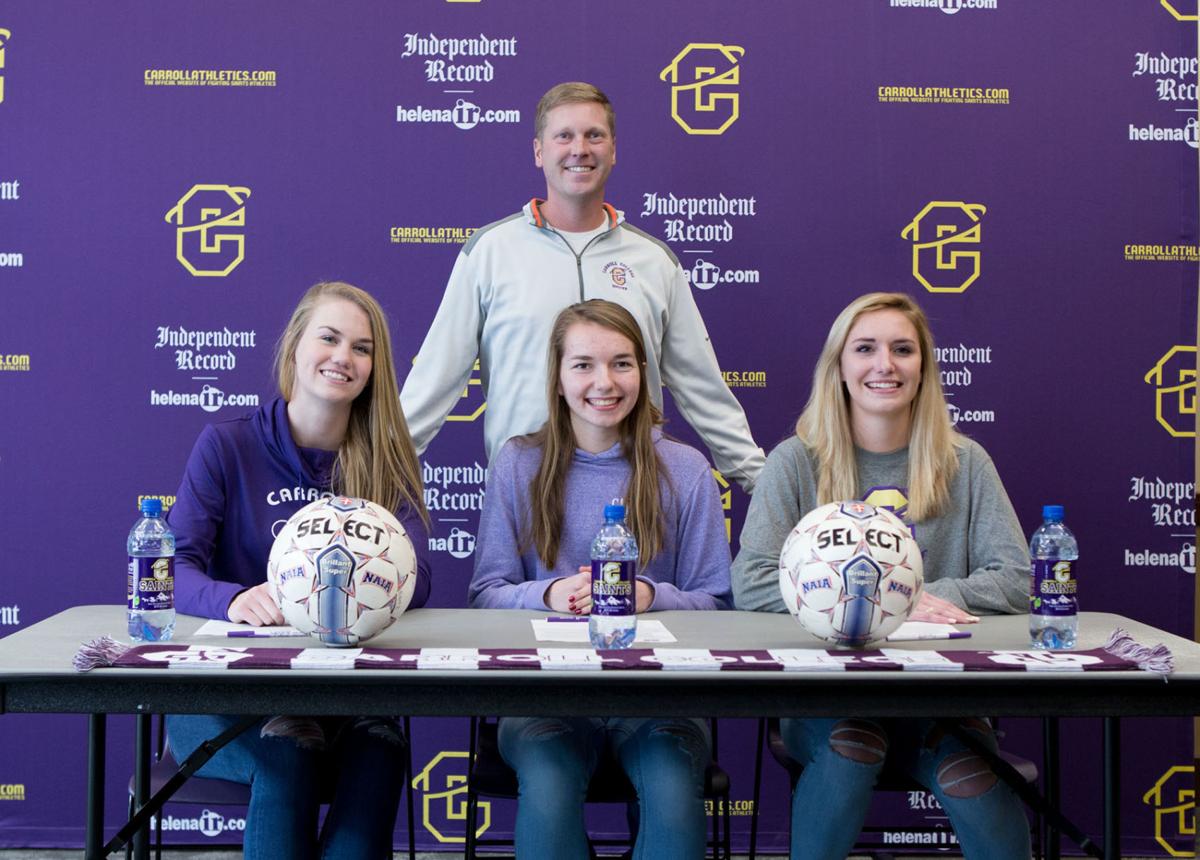 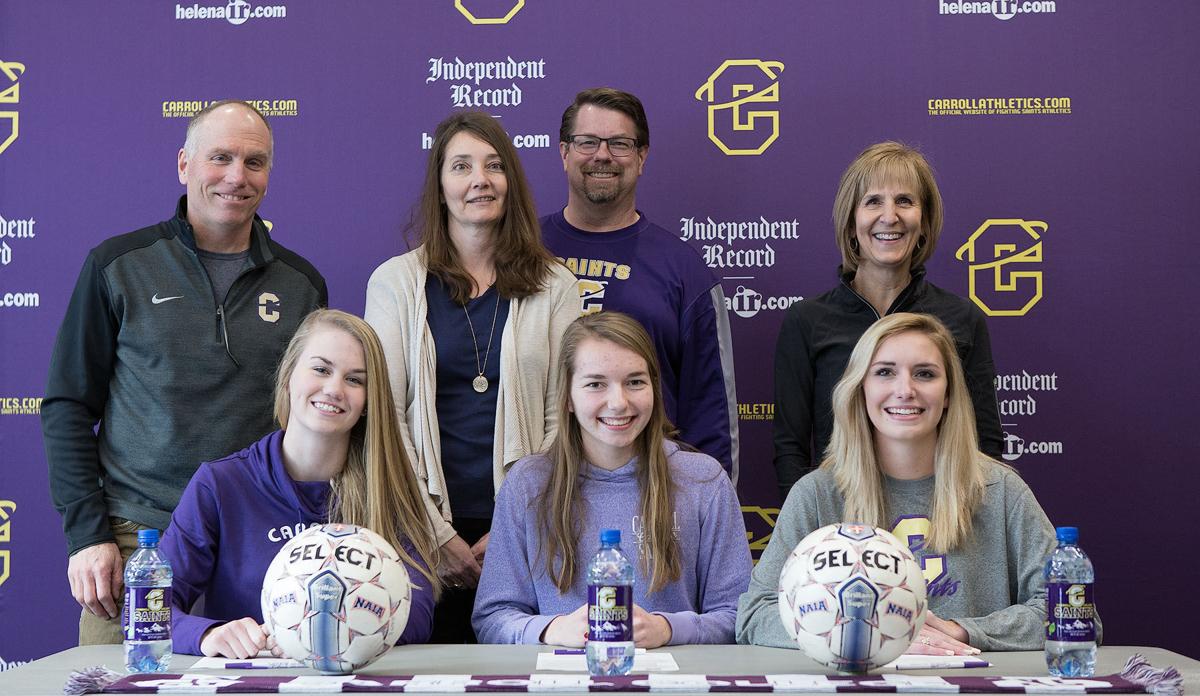 Helena High's Katie Martin, Capital's Ashley Carlson and Cailyn Wall of Helena sign their scholarship offers to play for the Carroll College women’s soccer team as their parents look on. 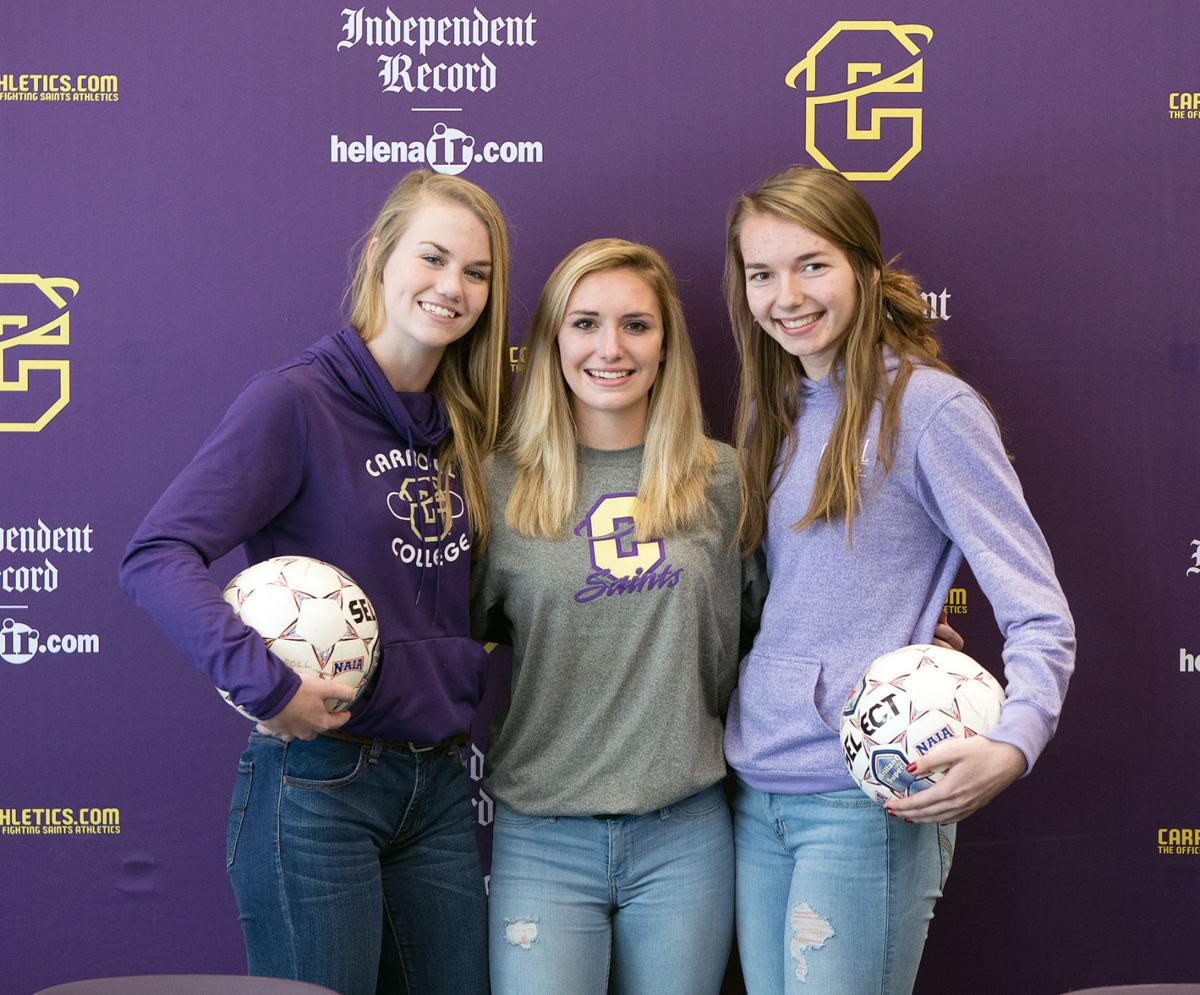 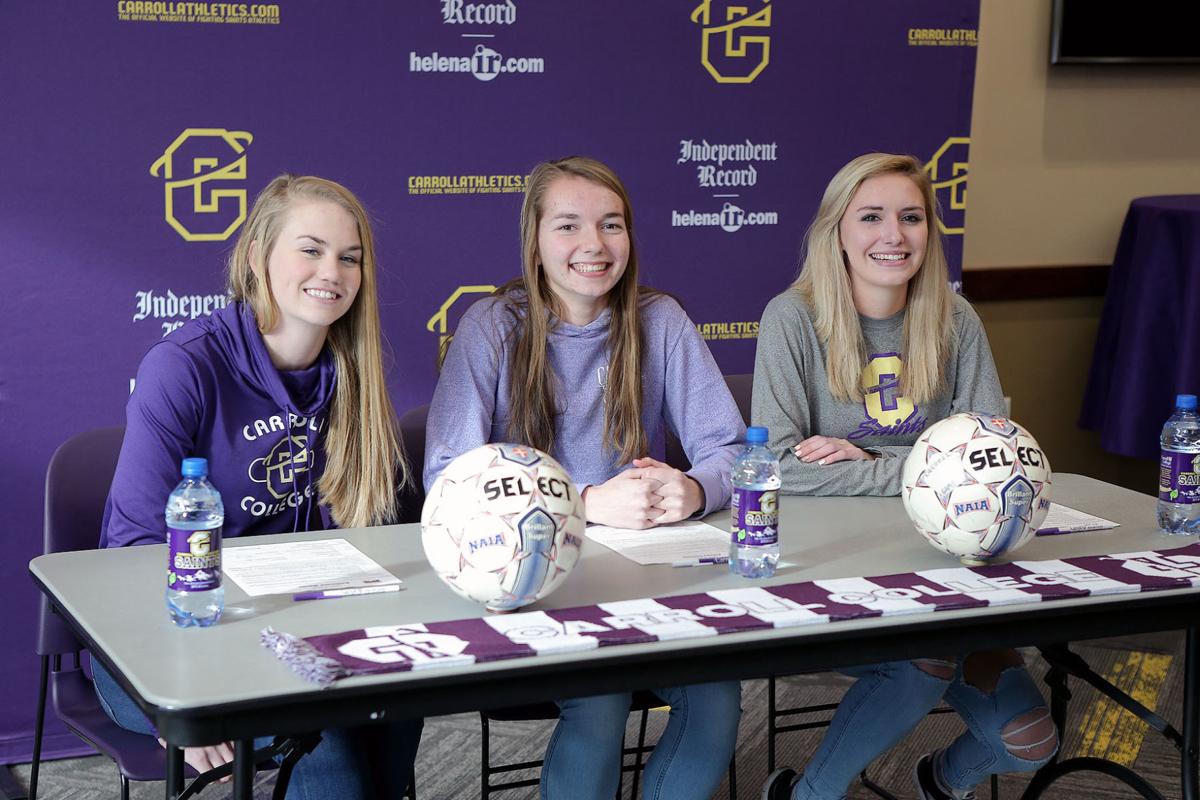 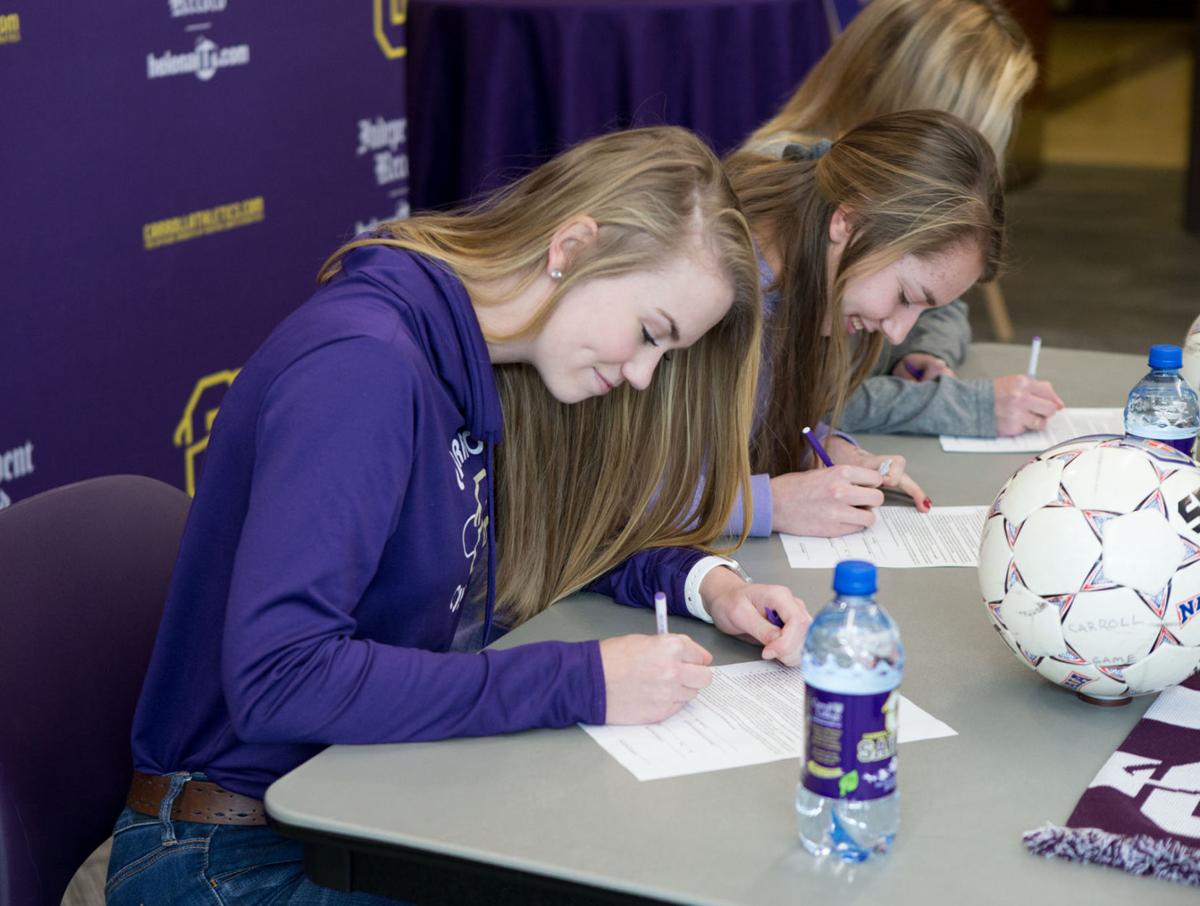 HELENA — Cailyn Wall, Katie Martin and Ashley Carlson have had their fair share of battles in Helena over the years.

The trio grew up in the Queen City together and while Wall and Martin starred for Helena High, Carlson made waves at Capital.

On Tuesday, the group collectively signed onto become Carroll College Saints and continue their soccer careers together.

“It’s really cool finally being with the other two girls from Helena and just realizing this is actually happening that I get to play at Carroll next year,” Wall said during a signing ceremony held in a new meeting area of the PE Center at Carroll College. “It’s really exciting.”

Wall, Carlson and Martin were all giggles, miming signatures for a large contingent of media, family and coaches on Tuesday afternoon.

The three were selected to as all-state performers at their respective positions. In each of the past three soccer seasons, the AA state championship featured Wall and Martin or Carlson.

Martin played midfielder for the Bengals, becoming a four-year letter winner. She played a role in four straight conference championships and two state championships in 2015 and 2017.

This past season, Martin became the Bengals’ all-time second leading scorer and was No. 4 in the Western Conference with 36 points on 13 goals and 10 assists. At the state tournament, she scored three times and had an assist. She was an all-conference selection in 2016.

Martin couldn’t pass up an opportunity to play in her hometown and with Wall and Carlson.

“I think I've always wanted to play for Carroll, growing up and playing soccer,” Martin said. “I’ve known some of the girls that have played for Carroll and they all had a good time.”

Wall, like Martin, is a four-year letter winner and two-time state champion. The defender helped the Bengals turn in four clean sheets and give up a single goal in four other games. She, too, garnered all-state honors this past season.

“I decided halfway through my season,” Martin said. “I really knew that’s where I wanted to go, so as soon I got offered I accepted.”

Carlson earned letters every year at Capital. She was a member of the 2016 CHS state runner-up team. This past season, she led the the Bruins in scoring and was ranked No. 5 in the Western Conference with 32 points on 15 goals and two assists. In addition to her 2017 all-state selection, she also earned a 2016 all-conference nod.

Carlson said she always had a feeling she’d end up at Carroll. Attending Carroll soccer camps since age 12, she knew the soccer program was the right fit. Once she realized Carroll’s medical program had a lot to offer, she was sold.

“It’s a really good environment and I really love all the coaches I’ve had here,” Carlson said. “It was kind of a no brainer for me.”

While the recruits took until their senior season to garner an offer and make their own decision, Saints soccer coach Dave Thorvilson said the progress really began when all three were sophomores.

“Typically, Helena kids like to get out of Helena and sometimes out of the great state of Montana,” Thorvilson said. “We feel very fortunate that all three of them were willing to stay and wanted to play for a program like ours at Carroll College.”

The three Helenans join two others to bring Thorvilson’s class to a total of five. Thorvilson also added Ellie Stevens of Kalispell Glacier and another recruit out San Diego who has Montana ties.

An Unconventional One-and-Done: Carroll's Emerald Toth gave up Division I basketball in favor of academics

HELENA — Emerald Toth made it a point to sit down and watch the Boise State women’s basketball game on Monday night.

“It’s really about helping people. I want to be able to be an asset to a community and heal families.” - Carroll senior Dane Warp.

When it comes to quarterbacks in the history of Montana high school football, few have had more success than Helena's Tyler Emmert.

Carroll senior Dane Warp was tired on Tuesday. He just got back at midnight from a medical school interview. But as a senior, he knew what he had to do.

Carroll College is announcing its 2020 recruiting class. Follow for lives updates as the Saints detail each of their new signees.

Montana Tech breaks away in second half to fend off Carroll

Montana Tech put it together in the final ten minutes Tuesday.

BUTTE — Carroll head coach Rachelle Sayers said that Maddie Geritz’s mom is riding the bus for the rest of the season.

When it comes to quarterbacks in the history of Montana high school football, few have had more success than Helena's Tyler Emmert.

Helena High's Katie Martin, Capital's Ashley Carlson and Cailyn Wall of Helena sign their scholarship offers to play for the Carroll College women’s soccer team as their parents look on.