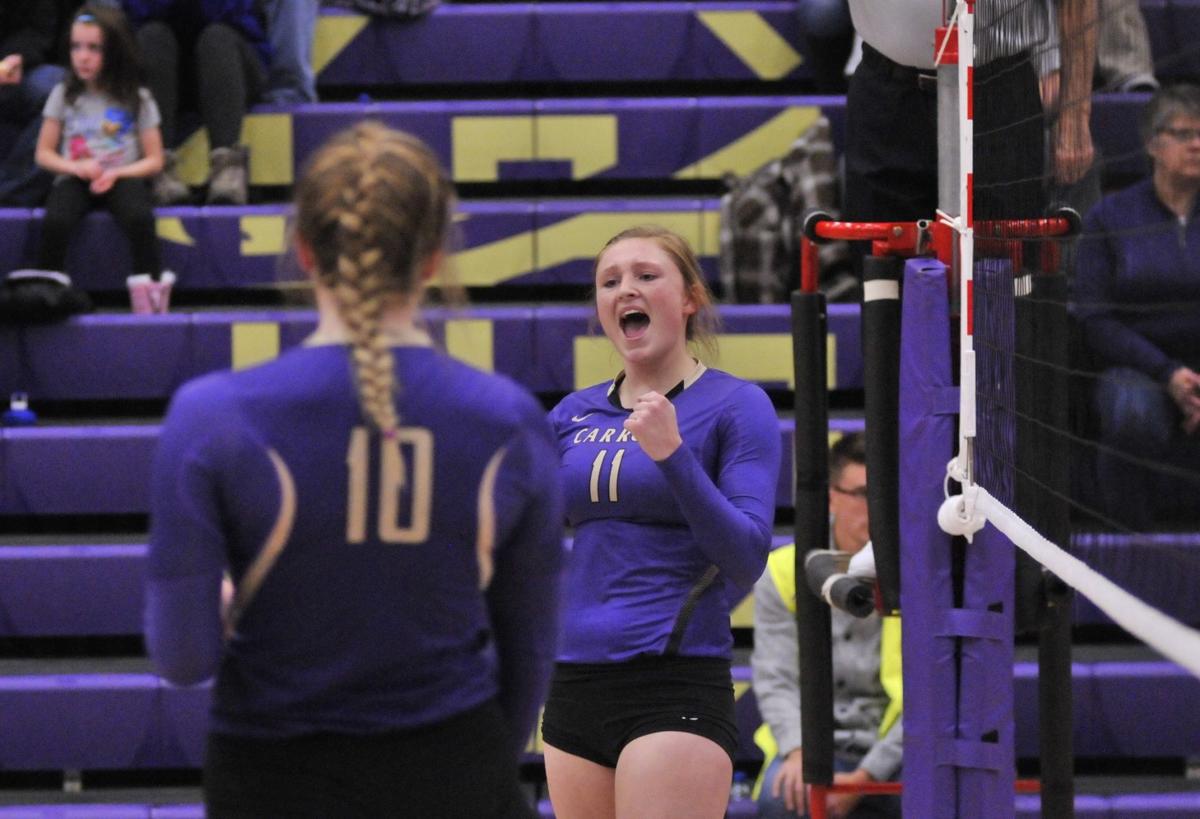 Carroll's Taelyr Krantz celebrates after a point during the Saints' match against MSU-Northern at the Frontier Conference tournament Friday in Helena. The Saints won the match 3-0. 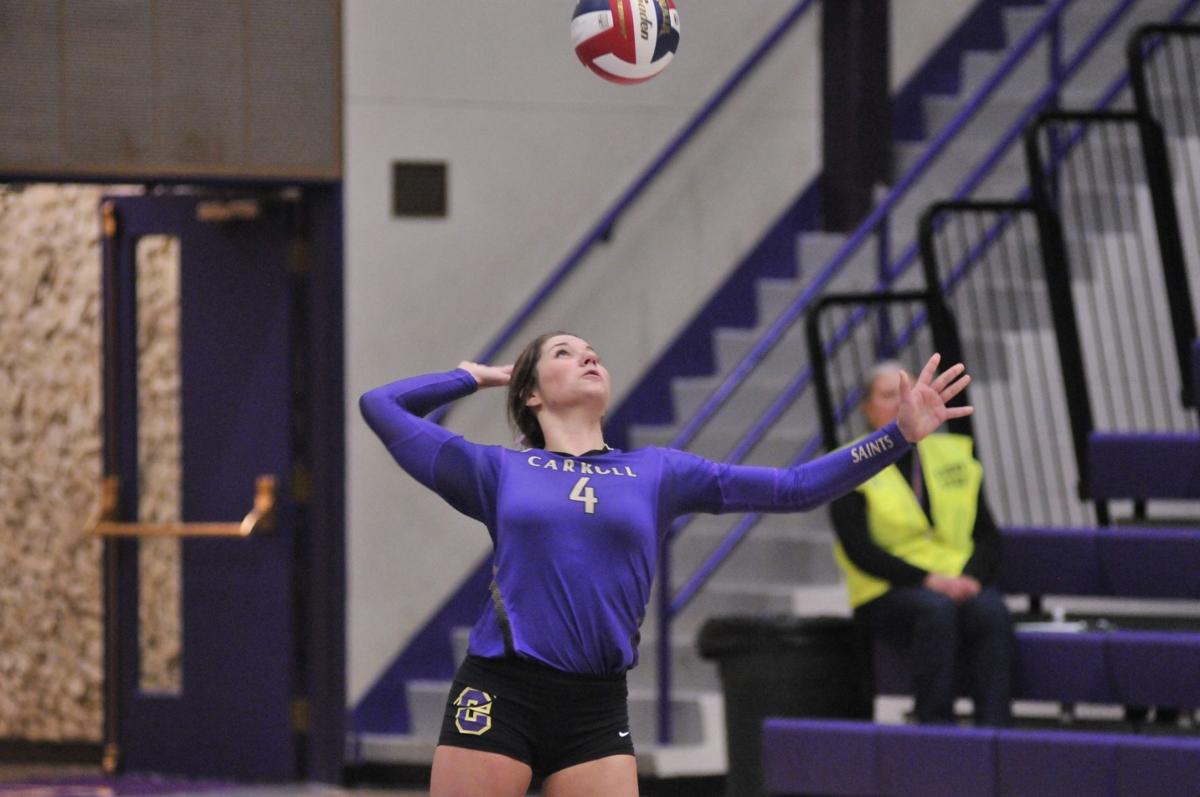 Carroll's Casey Berry serves during the Saints' match against MSU-Northern at the Frontier Conference tournament Friday in Helena. The Saints won in 3 sets.

Taelyr Krantz and the Carroll College Saints had a first of sorts this season.

The group -- often the sole focus in the PE Center -- sat and watched volleyball games in their gym on Friday. It was the opening day of the Frontier Conference Tournament, and the hosts and No. 3-seeded Saints played the No. 6-seed MSU-Northern in the nightcap.

Less than a week after ending the regular season with a 3-1 loss to Rocky Mountain College, Krantz and her teammates watched the Battlin’ Bears -- who played before Carroll -- and hoped.

“We were hoping Rocky would win so we could get another chance to put it down and prove we deserve to be up there with them,” Krantz said Friday.

First, the Saints had to handle business against the Skylights.

“I think the girls have been really focused all week,” Saints coach Moe Boyle said. “They have been playing together for really, together as a unit, the last four or five weeks. It’s nice as a coaching staff to be able to watch this culminate for them. I think it says a lot about the character of the team.”

Northern tested the Saints early, jumping out to a 7-2 lead and prompting Carroll to take a timeout. Boyle and the Saints weren’t immune to the nerves with the higher stakes of a conference tournament. Each team on the day had similar jittery starts.

“When you’re in your own backyard and you’re supposed to perform well, there’s pressure,” Boyle said. “It’s the conference tournament and every point matters now. I think that they felt it.”

Carroll responded, bouncing back and rolling to a 25-16 victory in the first set. The Saints wouldn’t slow down either, taking the next two sets in aggressive fashion, led in part by Krantz. She led the Saints with 10 kills, finishing with a hitting percentage of 43 percent.

“Our passes were on fire tonight,” Krantz said. “When you have passes that close, you have all three hitters involved and you just keep your blockers guessing. When everyone is firing it’s hard to get a block up against our hitters and it’s hard to keep us off the ground.”

Rayna Pilgeram provided 33 assists to lead the Saints. Behind Krantz, Mallory Arbizzani had nine kills, Brielle Bumgarner finished with eight and Pilgeram and Casey McInerney each finished with seven.

Carroll entered the tournament on a six-game winning streak, until running into Rocky Mountain College, who had swept the Saints earlier in the season. In the last match of the season, Rocky dealt the Saints a 3-1 loss.

It didn’t have any residual effect. The Saints, save the opening set’s first few points, were sharp on Friday.

“We have that passion to come back,” Krantz said. “We’re not settling for anything other than first. We’re fighting tooth and claw to get there. That performance that you saw is just a glimpse of what you’re going to see tomorrow because we have the passion and drive to get there.”

It certainly helps that the Saints are hosting the Frontier Conference Tournament. Boyle said it’s important for her Saints to be able to be at home and on personalized schedules. On the road, the team often does most things together.

“Sometimes that wears on you,” Boyle said. “It’s nice to be able to sleep in your own bed and have that space. I’m hoping it benefits us tomorrow.”

Rocky defeated Montana Western 3-0, giving Krantz and the Saints exactly what they wanted.

“It’s redemption,” Krantz said. “I think tomorrow you’re going to see how we can play against them and prove that we can compete.”

Boyle said her crew is excited to have another chance to take down Rocky. The match is scheduled for 1 p.m.

Carroll's Taelyr Krantz celebrates after a point during the Saints' match against MSU-Northern at the Frontier Conference tournament Friday in Helena. The Saints won the match 3-0.

Carroll's Casey Berry serves during the Saints' match against MSU-Northern at the Frontier Conference tournament Friday in Helena. The Saints won in 3 sets.