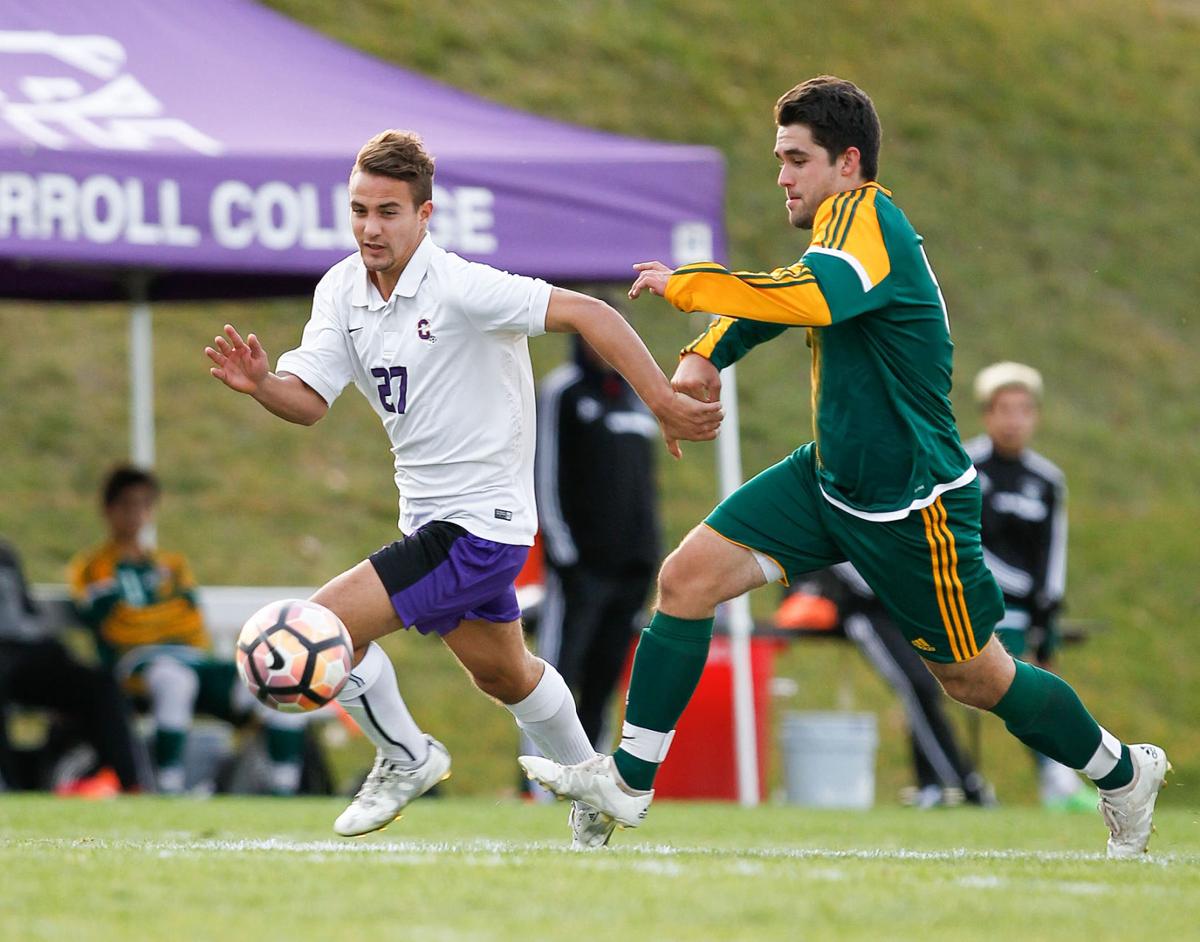 Carroll’s Dylan Young-Vazqyuez breaks past the Multnomah defenders in the second half of Friday’s game at Nelson Stadium. 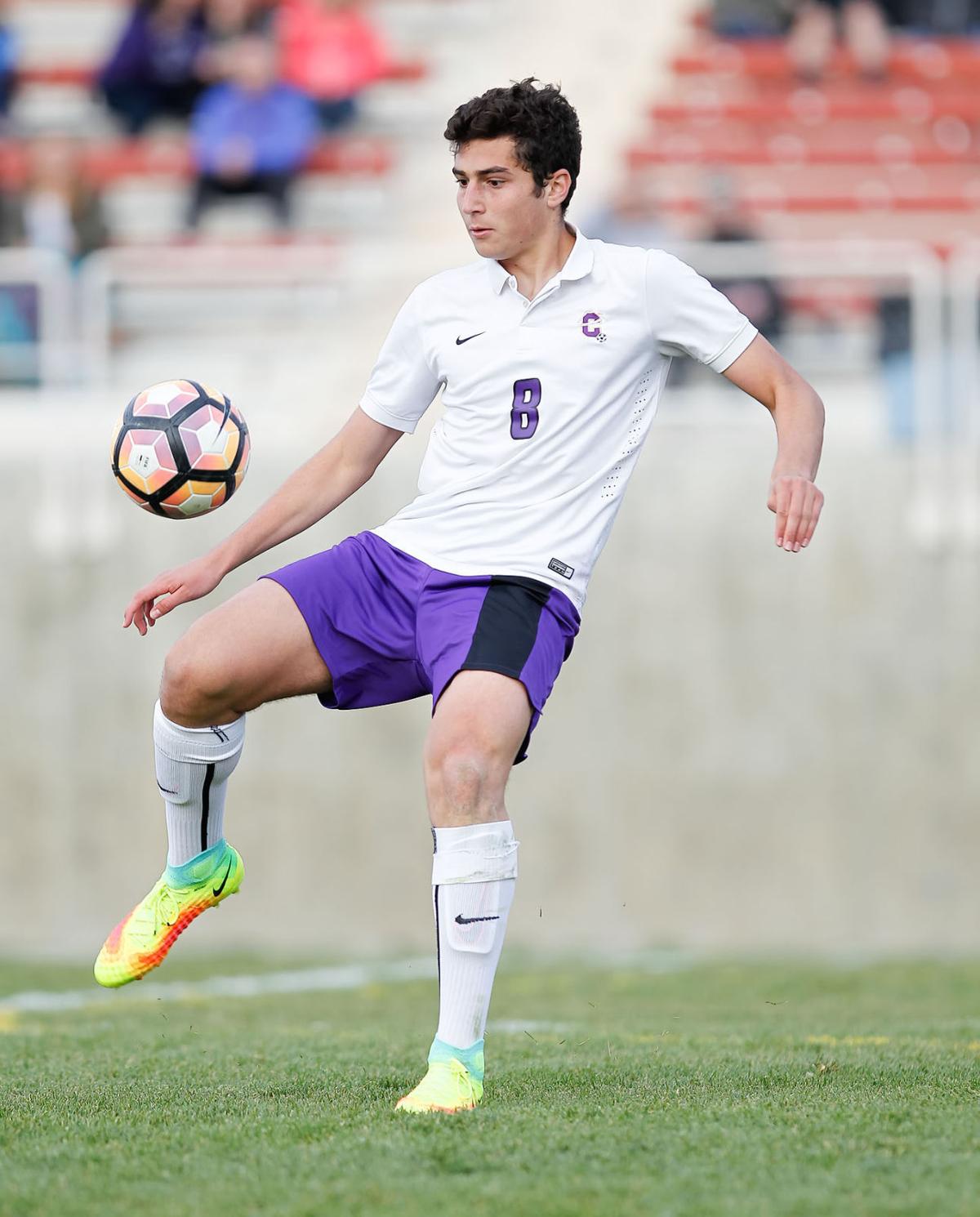 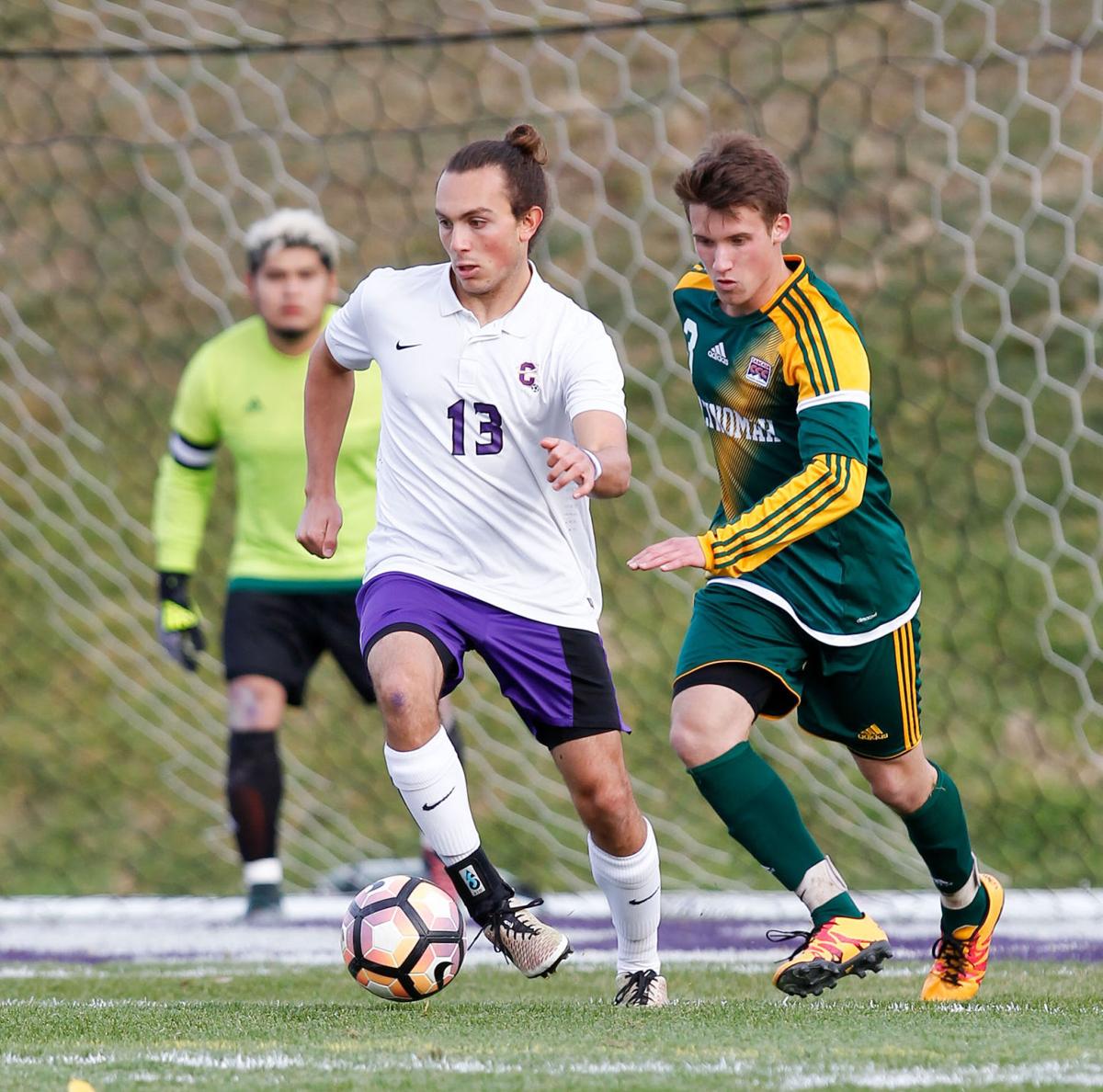 Carroll’s Kyle Thomson turns to the inside of Multnomah’s Joshua Gulliford in the second half of Friday’s game at Nelson Stadium.

The Carroll College men’s soccer team (9-8) is playoff-bound. The Saints knocked off Multnomah University (3-13) 8-1 on Friday at Nelson Stadium to secure their spot.

“People played well,” said Isaac Bostrom, who finished with two goals. “It was a good confidence boost. We had a tough game against Southern Oregon last weekend but we I think we came out and showed we’re ready for conference last week.”

Bostrom was referring to the Saints’ 3-1 loss to SOU last Friday. Early on, Bostrom got the Saints going.

The Helena native drew a foul in Multnomah’s box early on in the game, being dragged to the ground by a Lions’ defender to set up Carroll with a penalty kick. Carroll’s Jose Porras finished the penalty kick by beating the keeper to the right, and the Saints grabbed a 1-0 lead in the second minute.

The Lions struck back quickly when Fischer Rogers finished off an assist by Liberty Lillibridge with a goal, stunning the Saints briefly.

Then it was Bostrom that sent a slow rolling shot into the net in the ninth minute to help the Saints retake the lead. The second goal for the Saints foreshadowing a scoring surge to come.

“Not that needed to score a lot of goals, but we’ve created a lot of chances this season and squandered some chances,” Saints coach Doug Mello said. “Today we put some in.”

Carroll did get its foot on a lot of balls in the box, giving the Saints a lot of opportunities, but beyond an attempt by Kyle Thomsen, which sailed over the crossbar, and a bicycle kick by Jose Porras the Saints didn’t have many truly great shots in the first half.

Carroll certainly asserted control of the ball, but such was to be expected against a 3-12 team that had just scored its first conference win over a winless opponent, Walla Walla University, the Saints’ Sunday foe.

“I thought we started slow,” Mello said. “We knew if we pressed them we had a much deeper bench than they did. For today and Sunday we’re going to get a lot of players in and get them some time.”

Riley Prescott gave the Saints their third goal of the first half. He scored for the Saints’ in the 42nd minute, ripping a shot from well beyond the box to slip past Multnomah’s keeper, Manny Guillermo.

Guillermo was used to being fired upon, as he entered the game with 124 saves, over double what Carroll’s keeper Bernhardt Di Cino had registered. The amount of saves shows just how many shots the Lions’ defense allows, thus giving Guillermo a much more stressful workload.

Bostrom settled a pass in the second half, scooted it to his right and flicked a well-struck shot toward the goal and netted his second goal of the match. 48th minute. Alessi Georgiades followed suit two minutes after, netting a goal in the 50th minute.

Multnomah didn’t have an answer for Bostrom’s bulky frame. The 6-foot-3, 200-pound forward bullied his way into the box and was a threat with his footwork whenever he touched the ball.

Henry Smaldon finished a header in the 60th minute when a free kick from near midfield. Smaldon was the lone player to get his head on the ball during the play and beat the Multnomah’s keeper.

Smaldon wasn’t done there. The freshman midfielder scored again in the 67th minute.

Rodrigo Portillo ended the Saints scoring in the 89th minute when he drilled home a free kick from outside the box.

“We hope we’re peaking at the right time in the sense of getting some goals and feeling good about ourselves to do something in the playoffs,” Mello said.

Carroll had injuries affecting four starters on Friday. James Lamont, Jose Mena, and Dylan Allen didn’t play. Eric Hollenbaugh started the first half, but did not play the second half for the Saints.

“We’ve been a little bit inconsistent,” Mello said. “Now to our credit, we’re hoping that those guys that were seeing action as reserves are now tried and true and we can use them for the rest of the season and use them for the playoffs.”

James Lamont didn’t play. Starter. Jose Mnea, starter, didn’t play. We had one of our starters came out in the second half, Eric Hallenbach, wasn’t feeling good. Dylan Allen didn’t play as well.

Carroll entered the game needing to win one of its final two games to secure a playoff berth. The Saints had the added benefit of playing the two worst teams in the Cascade Collegiate Conference.

Carroll’s Dylan Young-Vazqyuez breaks past the Multnomah defenders in the second half of Friday’s game at Nelson Stadium.

Carroll’s Kyle Thomson turns to the inside of Multnomah’s Joshua Gulliford in the second half of Friday’s game at Nelson Stadium.