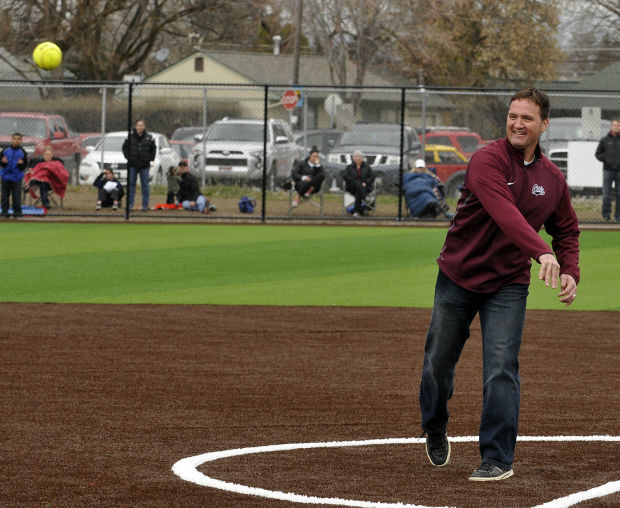 Montana Athletic Director Kent Haslam throws out the first pitch at a Griz softball home opener. Spring sports were canceled because of the ongoing coronavirus pandemic.

MISSOULA — Like many athletic departments across the country, Montana is trying to figure out what the ongoing coronavirus pandemic will mean for it financially.

The unprecedented changes came in a matter of days and created concern for athletic departments across the country because of the unknown financial ripple effects.

There’s lost revenue from the NCAA basketball tournament, lost ticket sales for spring sports, potentially fewer donations coming in and possibly fewer tickets purchased for future dates with people tightening their belts. But there are also fewer expenses without any spring sports, all of which operate at a deficit for UM.

Montana had overall revenues of about $23.4 million and expenses of about $22.1 million in fiscal year 2019, according to its Revenues and Expenses Report submitted to the NCAA. In FY 2018, UM ranked third in revenue and second in expenses among the 11 full-time Big Sky Conference members, according to USA Today.

“With very little revenue in the spring compared to expenses, we will end up saving money on our operation if you look just at spring,” Montana Athletic Director Kent Haslam said. “However, that savings is quickly gobbled up by the reduction in the NCAA distribution.”

Montana would see a financial benefit from the fewer expenses of not paying for spring sports the rest of the school year after briefly starting up competition.

All of Montana’s sports except for football operated at a deficit in FY 2019. Non-football sports operating at a deficit is largely commonplace in college athletics, and football operating at a profit is a rarity, especially at the FCS level, as athletic departments require heavy subsidies to stay afloat. Take out the approximately $2.2 million in direct institutional support for UM football in FY 2019, and the team still made a profit of about $700,000.

With no games, UM's seasonal, temporary and student workers aren't working, according to Haslam. But no athletic department employees have been laid off, and if there are any layoffs, that would be decided in "a campus-wide discussion," he added.

“Like everyone else, we are working to provide flexibility through telecommuting,” Haslam said.

The NCAA has suspended on-campus and off-campus recruiting for all Division I sports until at least April 15 because of the pandemic. With no traveling, UM could likely end up lowering what it spent on recruiting in FY 2019, which was $391,672.

There’s also no more travel for spring competition, which cost UM about $516,000 in FY 2019. That was roughly one-fourth of its overall team travel expenses of approximately $2.08 million for all sports.

“There are savings, but we have lost some revenue as well,” Haslam said.

Montana will also experience lost revenue offsetting some of the savings from having fewer expenses.

The drop in expected revenue from the NCAA — because of the canceled winter and spring championships, primarily the men’s basketball tournament — will affect all 353 Division I schools. The NCAA Board of Governors adjusted the distribution to those schools from $600 million to $225 million, a 62.5% decrease.

“We still need to understand what that specific number will be since the distribution first goes to the Big Sky Conference and is then divided among the members,” Haslam said.

Volleyball brought in $7,551 and soccer had $4,115 that fiscal year. Men’s and women’s track and field, which hosted the outdoor conference championship during that fiscal year, each collected $4,774 in ticket sales but had a total of $0 over the previous five years.

“This would be far more impactful if it was coming into the fall,” Haslam said. “…The financial impact right now, good thing that it happened in the spring.”

There are three options for already-purchased tickets to see the softball team, which was scheduled to play its first home game April 1, beginning a stretch of 13 home games in 32 days. The options are a refund, which would lower softball revenue this year, a credit for next year, which would defer the revenue to that year, or donating the money to the softball program, which would give the athletic department money it was expecting this year.

Another issue is the status of donations, or the potential lack thereof because of the uncertain economic times. Montana averaged about $4.9 million in donations over the past six financial years.

“The unintended consequences that come from how does this limit donors and their willingness to commit and to donate, those type of things are really not measurable right now," Haslam said.

The Grizzly Scholarship Association’s Spring Tour, which is partly a fundraising opportunity across the state in May and June, is canceled, Haslam said. The golf event scheduled for June 5 in Missoula is still on.

“I couldn't put a hard number on the amount we raise just off the spring tour,” Haslam said. “It is valuable because of what we raise, but even more importantly it is valuable because of the connections and time spent with people who are so dedicated to the university and athletics. If possible, we will try to do some kind of modified tour later in the summer so we can get out and see people.”

More impactful questions could arise if things drag into the fall and the football season is affected by the pandemic.

UM football pulled in about $8.62 million in revenue that year, accounting for about 36.9% of Montana’s overall revenue of about $23.35 million.

“Football is our big revenue source, no doubt about it,” Haslam said. “So this dragging on into the fall is a concern. However, that would be a concern for every school in the country. We are a rarity at the FCS level when it comes to the amount of revenue we can generate on football.”

UM’s football ticket sales of about $4.8 million in FY 2019 accounted for about 56% of its football revenue. Those sales were more than any other Big Sky athletic department made in ticket sales for all sports combined in FY 2018, meaning UM could be impacted the most by lost ticket sales should a change come to fall sports.

“The vast majority of our revenue comes from ticket sales, so playing in front of an empty stadium while still televising the game might preserve some revenue for conferences with lucrative television contracts, but that really doesn’t help us unless we change how we collect revenue from televised events,” Haslam said. “That would have to be at the conference level, since the conference owns all television rights for conference events.”

Montana is in its football season ticket renewal process and extended the deadline from May to June because of the uncertainty during the pandemic. Haslam said they will be monitoring the renewal of season tickets.

“We’re kind of right entering into the thick of that right now,” Haslam said. “Our renewal rates on our suites and our club seats have been good, but that’s still to be seen.”

Football is UM’s lone sport that makes a profit, and not just by a small margin, finishing with a net positive of about $2.9 million in FY 2019. That’s a rarity in college football, especially among the FCS ranks and with those teams having similar football expenses.

Big Sky teams rely heavily on subsidies from the school to help football and all sports operate. Montana was the lowest among the 13 football members at 35.91% of its overall revenue coming from the institution in FY 2018, which dropped down to 34.21% in FY 2019. Montana State is the closest at 50.92% in FY 2018, the other 11 teams are all above 59% and Sacramento State took the most institutional support at 83.24%.

Included in there are student fees, which could be impacted by potentially decreased enrollment because of the pandemic. Montana took in about $1.2 million in students fees in FY 2018, the second-lowest amount in the conference, meaning it's not overly reliant on fees and could be one of the least impacted on that front if such a situation arose.

Donation-wise, football accounted for about 60.6% of contributions to UM in FY 2019, taking in about $1 million of the approximately $1.66 million for men’s and women’s sports. There were another $2.66 million in contributions, but they weren’t made to a specific team.

The NCAA Division I Council Committee will be voting Monday whether to provide an extra year of eligibility to winter and spring sport athletes who had their seasons cut short. The NCAA’s announcement on March 20 noted that it supports giving schools “autonomy to make their own decisions in the best interest of their campus, conference and student-athletes.”

There will be financial implications to extending the eligibility clock of athletes, but the exact impact is “hard to know,” Haslam said. Scholarships are Montana’s largest expense category at about $5.35 million in FY 2019, accounting for 24.2% of Montana’s operating expenses of approximately $22.1 million.

“As far as eligibility relief for spring sports, we will have to see how that looks when the vote is done on Monday,” Haslam said. “It might be that another year of eligibility is granted, but how and whether or not we fund the additional scholarship costs is yet to be seen.”

An operational challenge would be the size of rosters and the number of scholarships because players in the 2020 recruiting class have already signed.

For example, Montana offers 12 softball scholarships. The question, Haslam posed, is would that number be increased next season if any seniors return, and how would they end up whittling that back down to 12 in the future.

“It’s going to be a tricky roster maneuver, and certainly there will be financial impacts,” Haslam said. “Spring sports for us, not heavy, heavy scholarships in those. There’s a good number, but it’s different than our fall sports when you put in volleyball, soccer and football. Those are pretty large scholarship numbers right there.”

On another note, track and field athletes may only get back their outdoor track season, not the winter indoor season or fall cross country, if they participate, Haslam noted.

Should the vote pass, there will be other variables, such as if seniors not on scholarship want to return and pay for another year of school to play their sport, or if scholarship athletes already have a job lined up for when then graduate in May and don’t want to pass up that opportunity.

MISSOULA — Montana softball outfielder Anne Mari Petrino held out hope that she would get to play some more softball this spring and end her college career on her terms.

Montana got a commitment from a former University of South Florida backup QB who will be suiting up for his fourth college team in four seasons this fall, going from Div. II to JUCO to the FBS and now to the FCS.

Incoming Montana QB Kirk Rygol breaks down why he decided to transfer to the Griz, what he feels he’ll bring to UM and his path to his fourth college in as many years after spending last season at FBS South Florida.

Montana and Montana are both ranked in the HERO Sports FCS Preseason Top 25 as five Big Sky Conference teams land in the top 18, including four in the top nine.

The nitty gritty on how the University of Montana is going to reopen its weight room and athletic facilities to student-athletes.

The nitty gritty on how the University of Montana is going to reopen its weight room and athletic facilities to student-athletes.

Montana Athletic Director Kent Haslam throws out the first pitch at a Griz softball home opener. Spring sports were canceled because of the ongoing coronavirus pandemic.