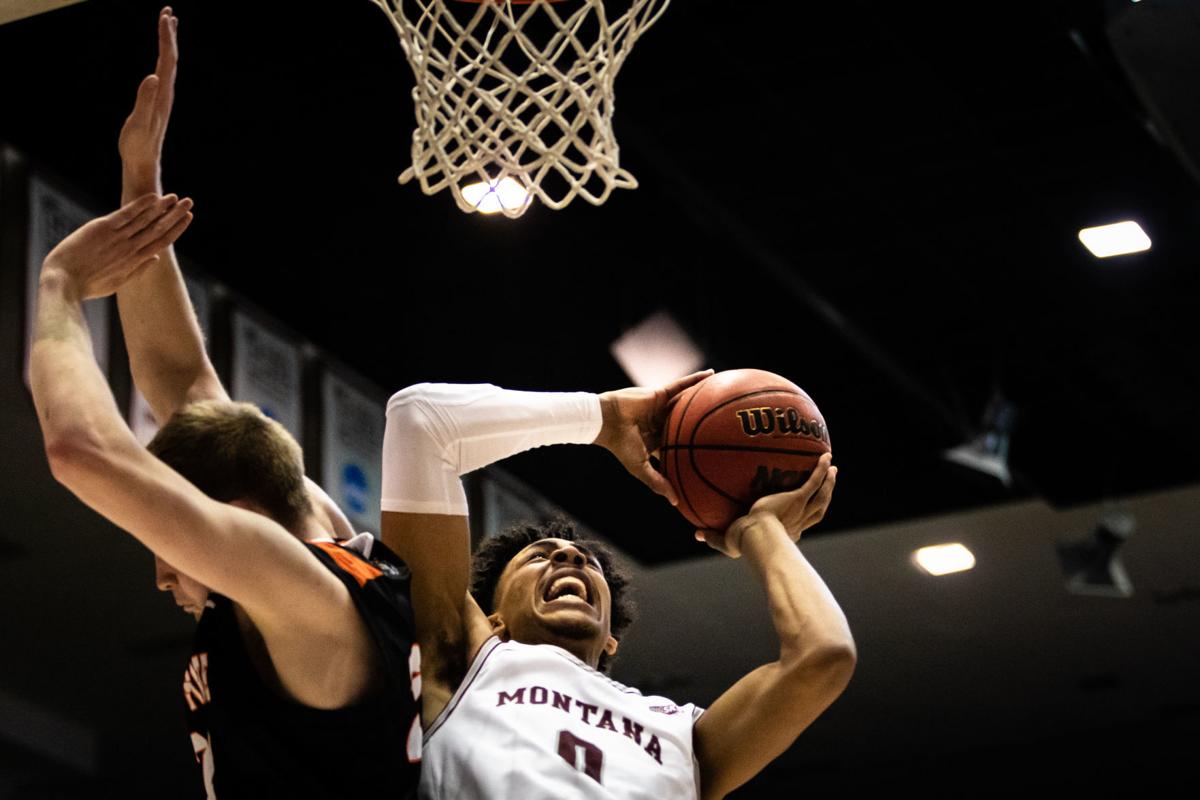 Montana freshman forward Kyle Owens goes up for a dunk, driving past the Idaho State defense to score during the fist half of the Grizzlies' 78-63 victory over the Bengals on Saturday night. A foul was called on the play, and Owens made the free throw. 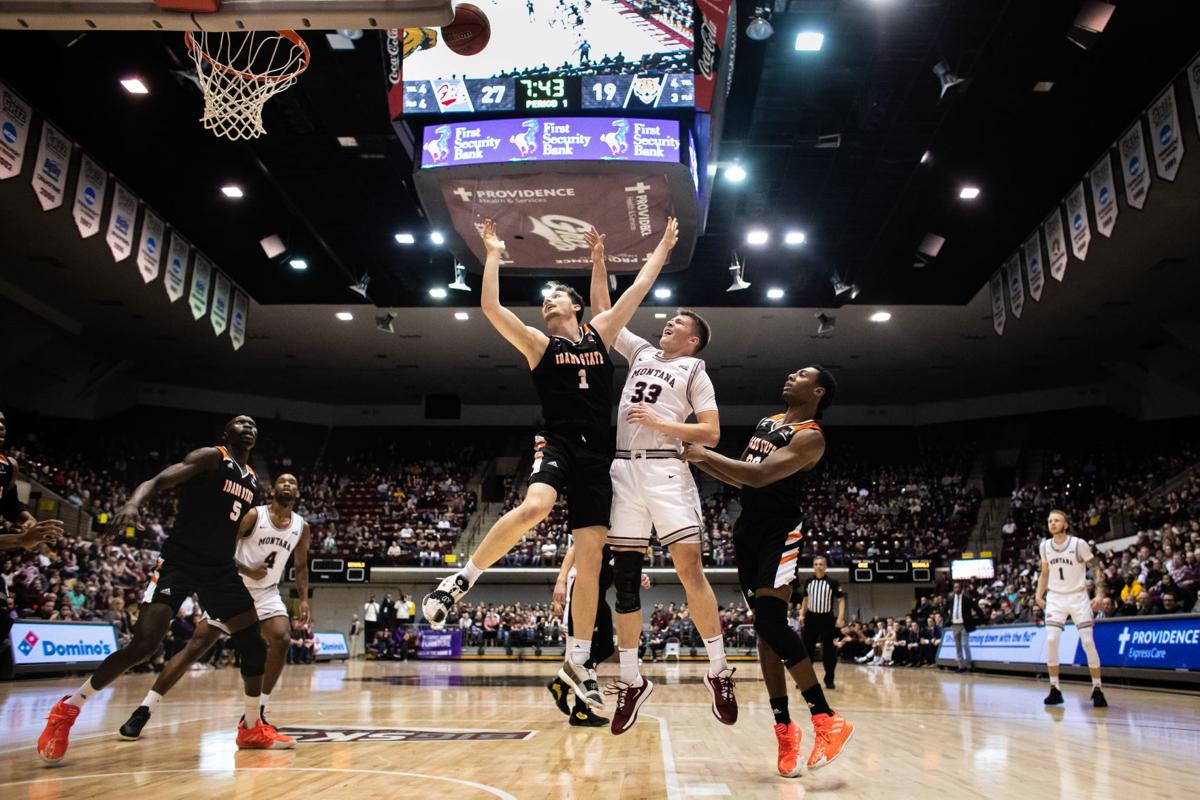 MISSOULA — Sayeed Pridgett knew he was flirting with a triple-double in the final minutes of the Montana men’s basketball team’s 78-63 win over Idaho State on Saturday night in front of 4,657 fans at Dahlberg Arena.

He did not, however, know he was just a single assist away until the Grizzly players on the bench all threw up one finger after he found Jared Samuelson for a quick jumper that marked No. 9.

On the next trip down the floor he nearly got the elusive final assist, but DJ Carter-Hollinger could not quite handle the pass.

“I didn’t know, when I was found out I was very close was when I threw the alley-oop to DJ (Carter-Hollinger), it just didn’t go where we wanted it to go and everybody on the team was trying to give me crap for not making it.”

No Montana player has recorded a triple-double since Kareem Jamar had 21 points, 11 assists and 11 rebounds against Hawai’i in 2012. The only other player in Montana history with a triple-double is Delvon Anderson, who recorded one against Simon Fraser in 1990.

While Pridgett is not quite looking to fill out the stat sheet, the place in history would be fitting for the star Montana swingman.

“I can’t say I was chasing it, guys were just in their right spots and I was just trying to score and they were clogging it up, kinda sagging off me, so just me driving was creating opportunities for my teammates and I was getting it,” Pridgett said.

Throughout the night, Pridgett had little issue finding his shooters. The Grizzlies finished 33 of 59 from the field (55.9%) and held the Bengals under 40% shooting while forcing 15 Idaho State turnovers.

Kendal Manuel tacked on 16 points for Montana on 7-of-14 shooting and looked locked in throughout the night. Jared Samuelson was the recipient of several first-half Pridgett assists under the basket and scored 12 points on 6-of-7 shooting in 21 minutes.

“Our offensive has been great,” Montana head coach Travis DeCuire said. “Playing through Sayeed (Pridgett) has been huge because he’s a willing passer that can score. They’ve usually been loading up two guys on him, so we throw the ball in there anyway and play out of that.

Montana had a lot of them, which came off of 16 assists. The Grizzlies' guard depth took a hit, however, when Timmy Falls left late in the first half with an apparent right ankle injury after a drive to the rim.

An Idaho State player seemed to inadvertently step on his right ankle during the play. Falls was helped off the court, putting no weight on his right leg. He briefly left the arena to get treatment in the training room, coming back with ice on his ankle.

Samuelson also was briefly knocked out of the game when he appeared to knock knees with an Idaho State player, but returned to the court after walking off gingerly.

The injuries did not seem to slow down the Grizzlies, at least in this game.

While the Bengals were able to hang around most of the game, they had little answer for the Montana offense for long stretches. Pridgett was able to score seemingly at will around the rim and finished 10 of 14 from the field.

Idaho State was able to hit a few shots to keep the game close through the second half, but 15 turnovers helped stymie any significant run it started to build.

“Credit to Montana, I thought they did a really good job defensively and (Sayeed) Pridgett and (Kendal) Manuel were very good on the offensive end too, we didn’t have an answer for either one of them,” Idaho State head coach Ryan Looney said.

Montana has now won 19 games in a row against the Bengals and is currently riding a five-game win streak, its longest of the season.

Montana is off for a week before heading to Bozeman for the second Cat-Griz matchup of the year. The Grizzlies improved to 16-10 on the season and 12-3 in Big Sky play. Idaho State is 6-18 and 3-12 in league play.

Pridgett’s record on triple-doubles, however, is now 0 for 3.

“I feel bad for him, he easily could have three of them, but he’s playing the right way,” DeCuire said. “Aggressive, trying to score, making good decisions when it’s not there, playing with his teammates and trusts his teammates and I think that’s why our offensive production is so much more efficient than it was at the beginning of the season.”

Montana freshman forward Kyle Owens goes up for a dunk, driving past the Idaho State defense to score during the fist half of the Grizzlies' 78-63 victory over the Bengals on Saturday night. A foul was called on the play, and Owens made the free throw.