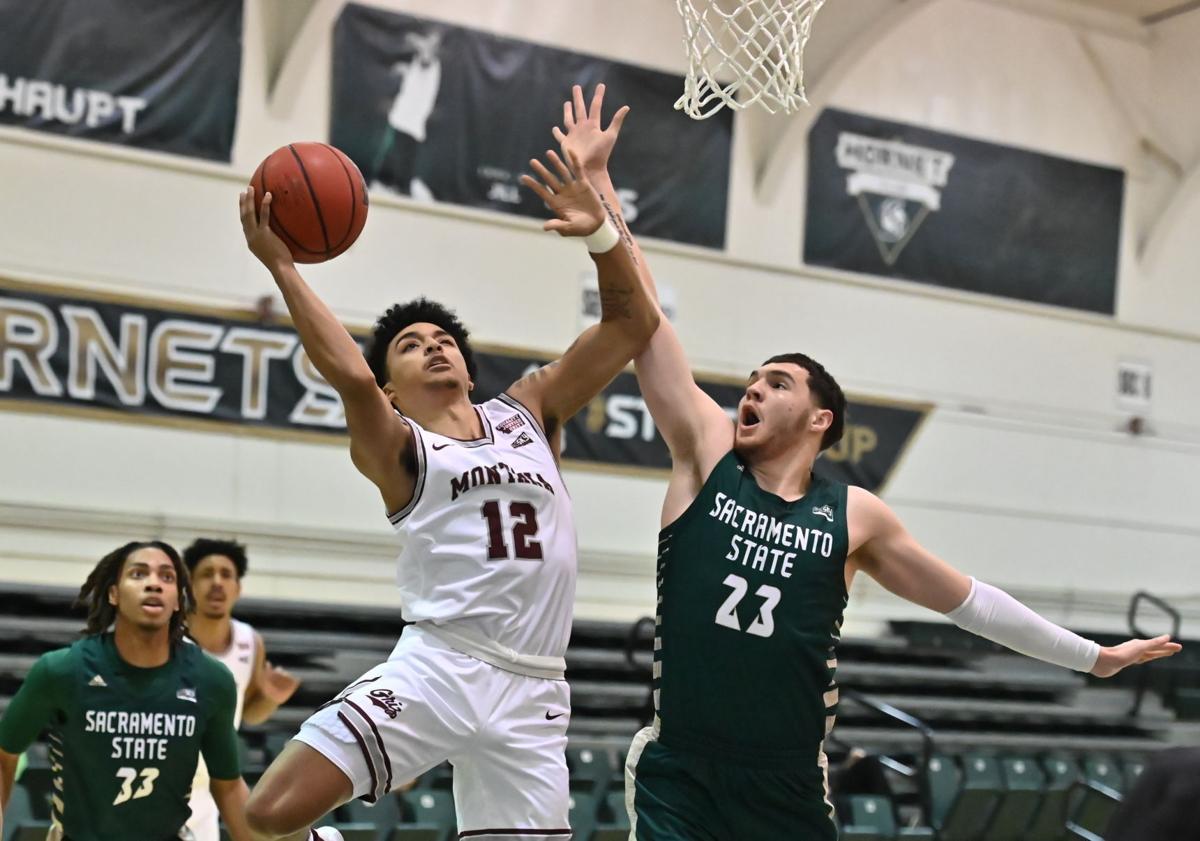 Montana's Brandon Whitney rises up for a shot against Sacramento State's Bryce Fowler on Saturday afternoon in Sacramento. Whitney set a career high with 28 points in the double-overtime loss to the Hornets. 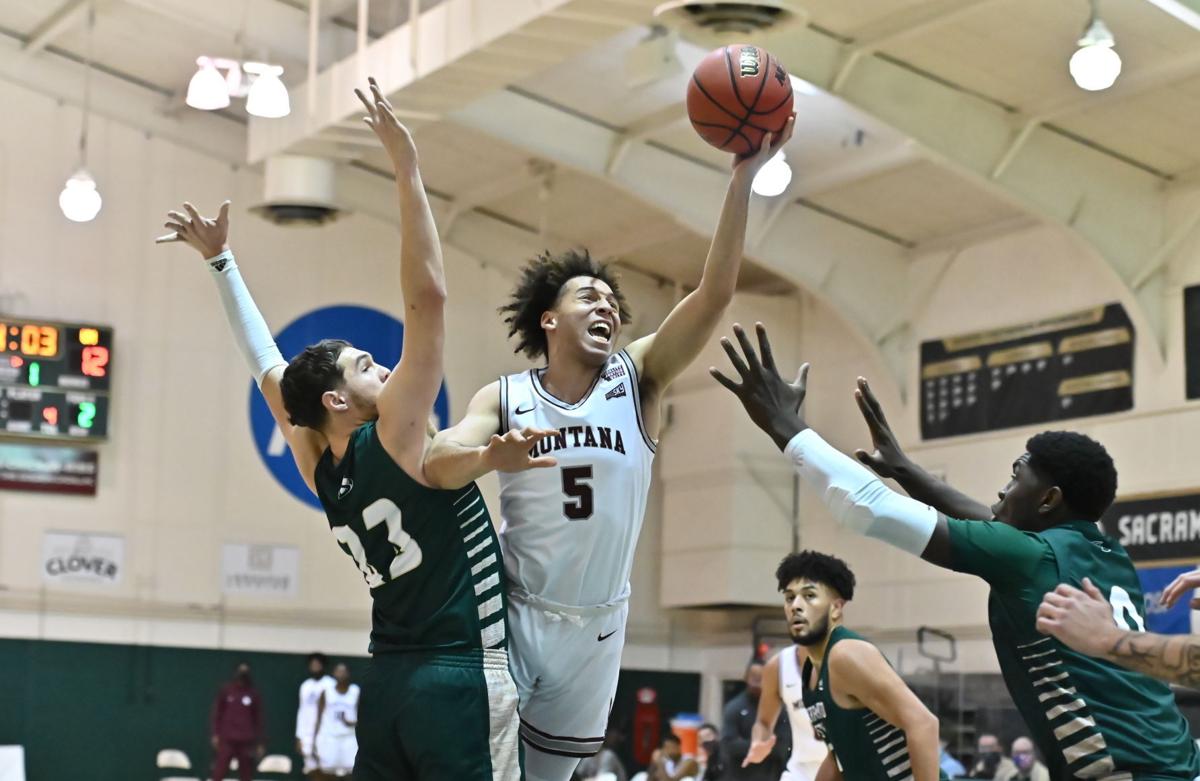 Montana's Robby Beasley puts up a shot during the Grizzlies' Saturday loss to Sacramento State in Sacramento. The Griz scored 83 points in the defeat.

Montana freshman Brandon Whitney poured in a career-high 28 points, but the Grizzlies fell in double overtime, 89-83, to Sacramento State on Saturday afternoon on the road.

It was the first Grizzly double overtime game since 2015, when UM downed Northern Arizona in a home thriller. Montana has lost its last five overtime games and dropped to 7-8 overall, 3-5 in the Big Sky.

"You know, the reality is there is a possession or two that if we could have back, maybe we'd make a different decision and we have a different outcome," Montana head coach Travis DeCuire told KGVO radio following the game. "And that's where experience comes in when you have freshmen and sophomores on the floor."

The Grizzlies ran into foul trouble in the extra periods, as Michael Steadman, Mack Anderson and Kyle Owens all fouled out of the contest. Whitney played 49 minutes while Anderson logged a career-high 28.

The height disadvantage started to show its head in the second overtime period, though Montana did trail by just a single point, 84-83, after Whitney hit a 3-point shot with 44 seconds left.

"I thought Mack (Anderson) was playing very well and we were getting stops," DeCuire said. "But it was unfortunate that he couldn't touch anybody without the whistle blowing."

Anderson fouled out of both games against Sacramento State and finished with four points and a career-high 10 rebounds. Four of those were critical offensive boards. He was plus-17 in his time on the floor.

Montana led by three with 54 seconds left in regulation after a 3-pointer from Cameron Parker, but three Sacramento State free throws tied the game. The Grizzlies had a chance to win the game, but Parker missed two shots near the rim late.

The Grizzlies were out-rebounded 46-43 and gave up 16 offensive rebounds, which led to 16 second-chance points.

"You can't win if you give up 16 offensive rebounds because that way they score more than their average," DeCuire said. "And obviously we foul too much at the five position and we got to work on defending guys without fouling."

Parker had 20 points, including two critical 3-point shots late in regulation as Montana used a 7-2 run to tie the game at 65 with 1:27 left. Montana took a 76-75 lead on a 3-point shot by Owens, who fouled out in the first few seconds of the second overtime period.

A driving layup by Parker with 19 seconds left in the first overtime period tied the score at 78, and a late shot by the Hornets fell short. Sacramento hit five of six free throws following Whitney's triple in the second overtime to pull away for the win.

Montana guard Josh Vazquez struggled during the weekend, hitting just 4 of 17 shots in the two games. He was minus-26 while on the floor and missed four of his five 3-point attempts on Saturday.

Eddy Egun started the game but played just four minutes in regulation. Owens was back in the starting lineup, while Josh Bannan was not a starter for the first time this season.

"To have some guys struggle for stretches over the entire game or the entire weekend and to have (Parker, Anderson, Whitney) step up and play the way they did, it tells you the potential in this group," DeCuire said. "We just all gotta show up on the same day."

NOTES: Montana freshman Robby Beasley was 3 of 5 from the free throw line, breaking a streak of 33 consecutive makes to start his Grizzly career ... UM shot 32 of 72 (44.4%) from the field and was 6 of 16 from the free throw line ... The win for the Hornets broke an eight-game losing streak against Montana ... Ethan Esposito had 26 points and Bryce Fowler 25 points to lead Sacramento State ... Next up for Montana is a two-game series against Montana State, one game in Dahlberg and the other in Bozeman.

The Montana volleyball team struggled to complete the sweep of Idaho on Monday after beating the Vandals on Sunday.

MISSOULA — For die-hard fans of the Montana women's basketball team, it's a little hard to swallow.

The Montana men's basketball team snapped a three-game losing streak by overcoming some late-game drama to beat on Idaho State on the road.

The Montana Grizzlies add a familiar foe to their spring 2021 football schedule.

'Compete like it matters': Montana Grizzlies shoot for 1st sweep of season in Game 2 against Idaho State

The Montana men's basketball team is aiming for its first sweep of the season when it takes on Idaho State in game two of its series Saturday.

The Montana men's basketball team collected its first sweep of the season by rallying in the final seconds against Idaho State after coughing up a double-digit lead.

Montana's Brandon Whitney rises up for a shot against Sacramento State's Bryce Fowler on Saturday afternoon in Sacramento. Whitney set a career high with 28 points in the double-overtime loss to the Hornets.

Montana's Robby Beasley puts up a shot during the Grizzlies' Saturday loss to Sacramento State in Sacramento. The Griz scored 83 points in the defeat.