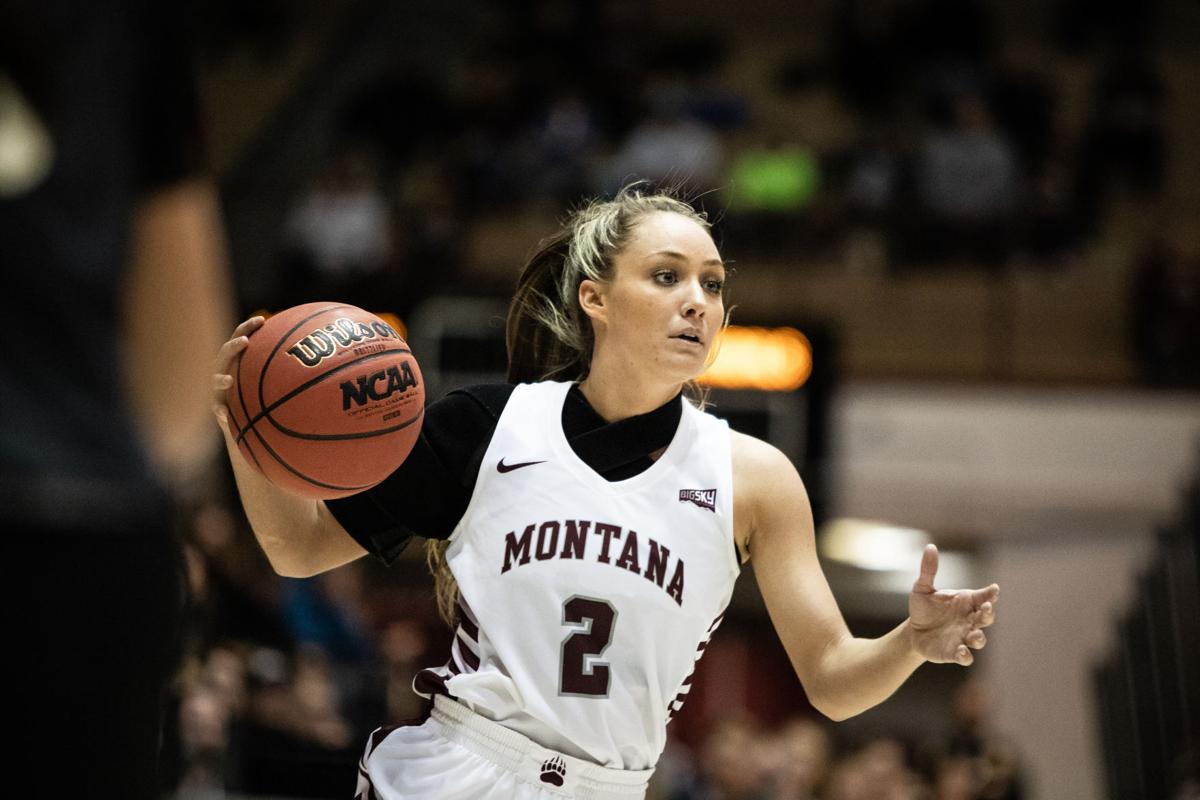 Point guard Sophia Stiles is back at 100 percent and looking forward to leading the Montana women's basketball team as a redshirt junior. The Lady Griz will open at Utah State on the day before Thanksgiving. 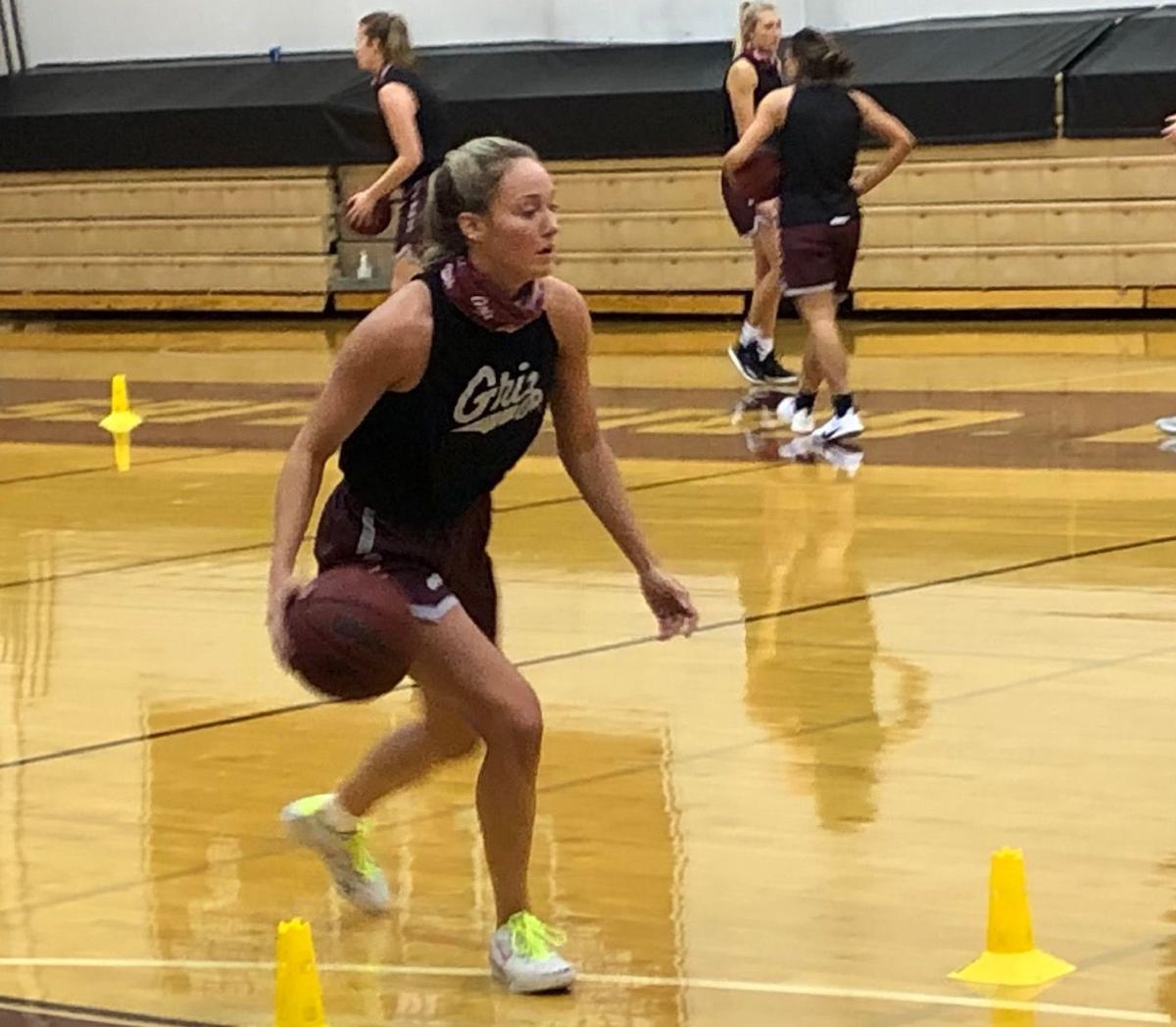 Sophia Stiles works on her dribbling during a Lady Griz practice last week.

MISSOULA — There was a time, three years ago, when Sophia Stiles had that wow factor, thrilling fans of the Montana women's basketball team with electric plays on both ends.

It wasn't so much the shooting, dribbling and passing — although she was solid in all those departments. It was the pure athleticism that separated her from almost all of her peers in the Big Sky Conference and many Lady Griz players over the past several decades.

Then the injuries came for the cat-quick guard from Malta. The torn-up knee in a February game in 2018. The shoulder injury that haunted her last winter as a redshirt sophomore.

Stiles took steps to prevent more damage by wearing constrictive braces on her right shoulder and left knee in the 2019-20 season. They hurt her offensive production but couldn't prevent her from earning best defensive player honors for her team.

Fortunately for Stiles, there are no injury issues this fall. Even the mental hurdles that come after extensive rehabilitation stints are in her rearview mirror. There's nothing to prevent her from getting back to her 2017 form.

"I'm excited to be back to my middle-of-my-freshman-year self," said Stiles, who is expected to start at point guard for the Lady Griz in their opener at Utah State next week.

"I've been playing with no braces and it's going really well. I could have taken (the knee brace) off last year. I was just a little more scared. This year I'm just ready for no restrictions."

No one is more excited for Stiles than her roommate, Abby Anderson, who is expected to join Sophia in the lineup as a returning frontcourt starter.

"She's so tough — her knee and then her shoulder last season was popping out every game," Anderson said. "Sophia is my best friend, too, so I've just been waiting for her to be back on the court because obviously she's a great guard.

No one knows for certain how the Lady Griz are going to fare when they take the floor for their opener. A majority of the roster is new and the head coach, Mike Petrino, is also new.

But Petrino was around as an assistant back when Stiles was dazzling. And he was there on that January night in 2018 when she came within a point of setting a new freshman standard for the Lady Griz, tallying 26 in a road win at Southern Utah.

So when Petrino says Stiles looks the best he's ever seen her look in practice, it's noteworthy.

"It's not just her basketball skill. I think her leadership has been excellent," the coach said. "Her athletic ability and her skill have always been there. I think her voice has been there even more now.

"Point guards love to make everybody else better. She's doing it now. Not just with her skill set, but with her voice. It's been huge for us."

Stiles is one of eight Treasure Staters on the Montana team. But she's the only one that's looks like a cinch to make the starting lineup. She takes seriously her role representing her home state and her small hometown on the Hi-Line.

"I love wearing the Montana jersey," she said. "I know a lot of these girls on the team do as well.

"I was very excited to have a big Montana freshman class come in (five Treasure Staters). I think it really helps with the tradition and keeping our fan base. Everyone wants to watch these Montana girls succeed. I think they did a very good job recruiting some shooters. We have very good three-point shooters and I feel like our returners have all gotten better."

When it comes to her own game, Stiles is her toughest critic. She led the Lady Griz in steals last season with 46 but was limited to an average of 5.5 points per game. She has worked hard on her outside shooting and ball handling coming off screens.

Sophia grew up playing point guard and she's excited to be focusing on that position after playing some shooting guard last season and as a freshman when McKenzie Johnston was running the show.

Conditioning has also been a focus for Stiles. She has every reason to believe she'll be playing a lot of minutes.

For Stiles, it seems like forever since the Lady Griz suited up for a game. Under normal circumstances, they would have already played twice or three times in November.

The bright side is that the wait will soon be over. On the day before Thanksgiving, Stiles and her teammates will usher in the Petrino Era in Logan, Utah.

"I'm so excited," Stiles said with a smile. "It's been really long since I played without a shoulder injury. It feel like it's been almost two years, so it's going to be fun to get back out there."

Bill Speltz is Missoulian Sports Editor and has served as Sunday columnist the past 14 years. Do you have a story idea? Email Bill at bill.speltz@missoulian.com.

The shooting was promising, but the defense needs to improve.

Montana picked up yet another commitment from an in-state kid, this one coming from Savage.

Montana picked up another commitment from an in-state kid, this one coming from Whitehall.

Montana added a second commit from Bozeman in just as many days, bringing a pair of brothers to Missoula.

The Montana athletic department has put in place budgetary limits for all coaches. It will have an affect on scholarships and recruiting.

Sentinel's Camden Sirmon is going to be sticking around Missoula for a little while longer, committing to the Montana Grizzlies one day after helping lead the Spartans to the Class AA state football title.

Where Are They Now: With CFL season canceled, former Montana Grizzly Dave Dickenson has 'highlight of 2020' coaching son, youth football

No CFL season didn't mean no football for Dave Dickenson this fall. The former Montana Grizzly quarterback got into youth football, coaching his son's team.

Montana picked up its fifth-known in-state commit in less than a week, this one coming from Bozeman.

The Montana athletic department has put in place budgetary limits for all coaches. It will have an affect on scholarships and recruiting.

Point guard Sophia Stiles is back at 100 percent and looking forward to leading the Montana women's basketball team as a redshirt junior. The Lady Griz will open at Utah State on the day before Thanksgiving.

Sophia Stiles works on her dribbling during a Lady Griz practice last week.