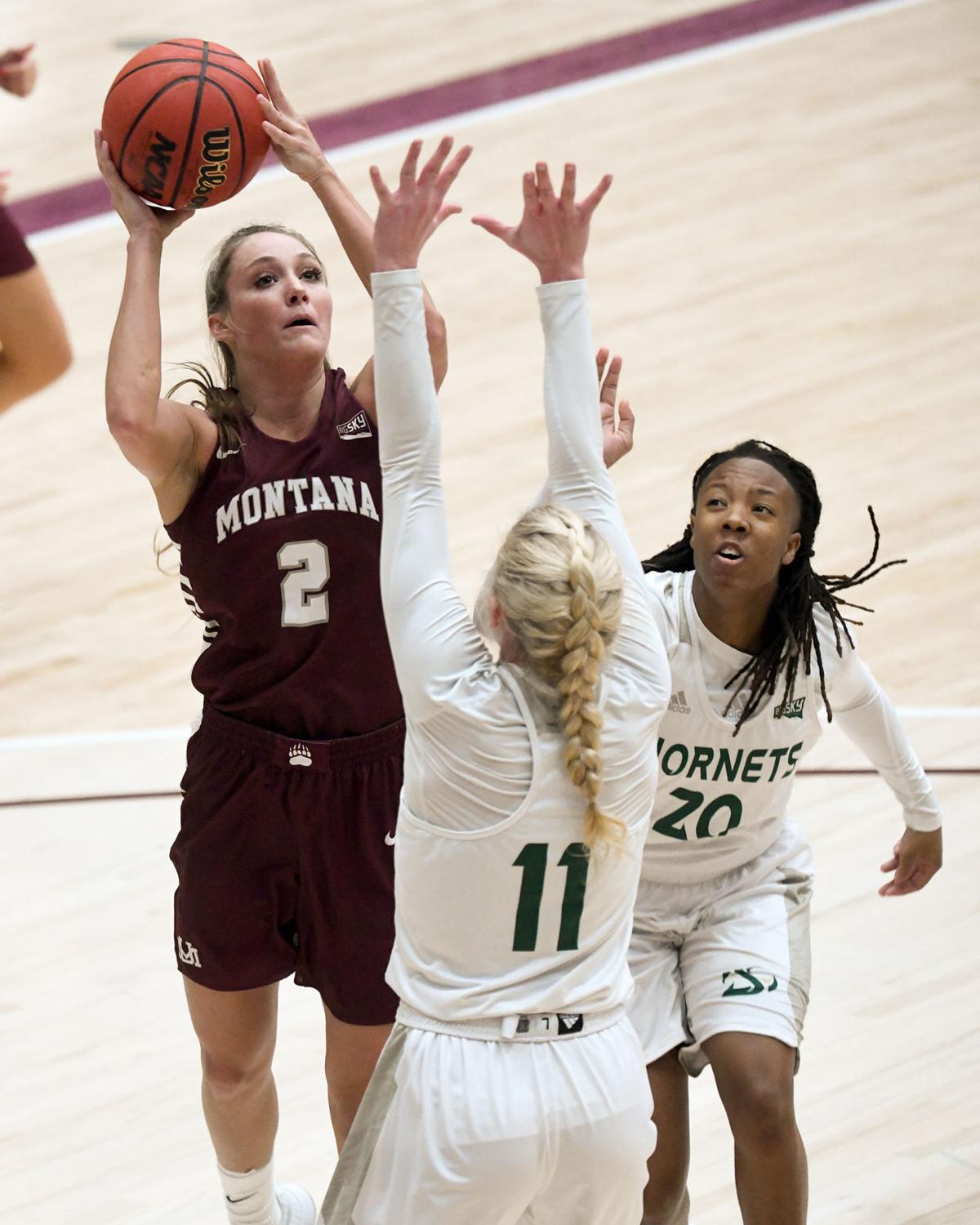 Montana’s Sophia Stiles (2) drives to the hoop against Sac State’s Summer Menke (11) and Jakira Wilson (20) during their basketball game at Dahlberg Arena on Saturday in Missoula. The Lady Griz defeated the Hornets, 66-63, to sweep the series. 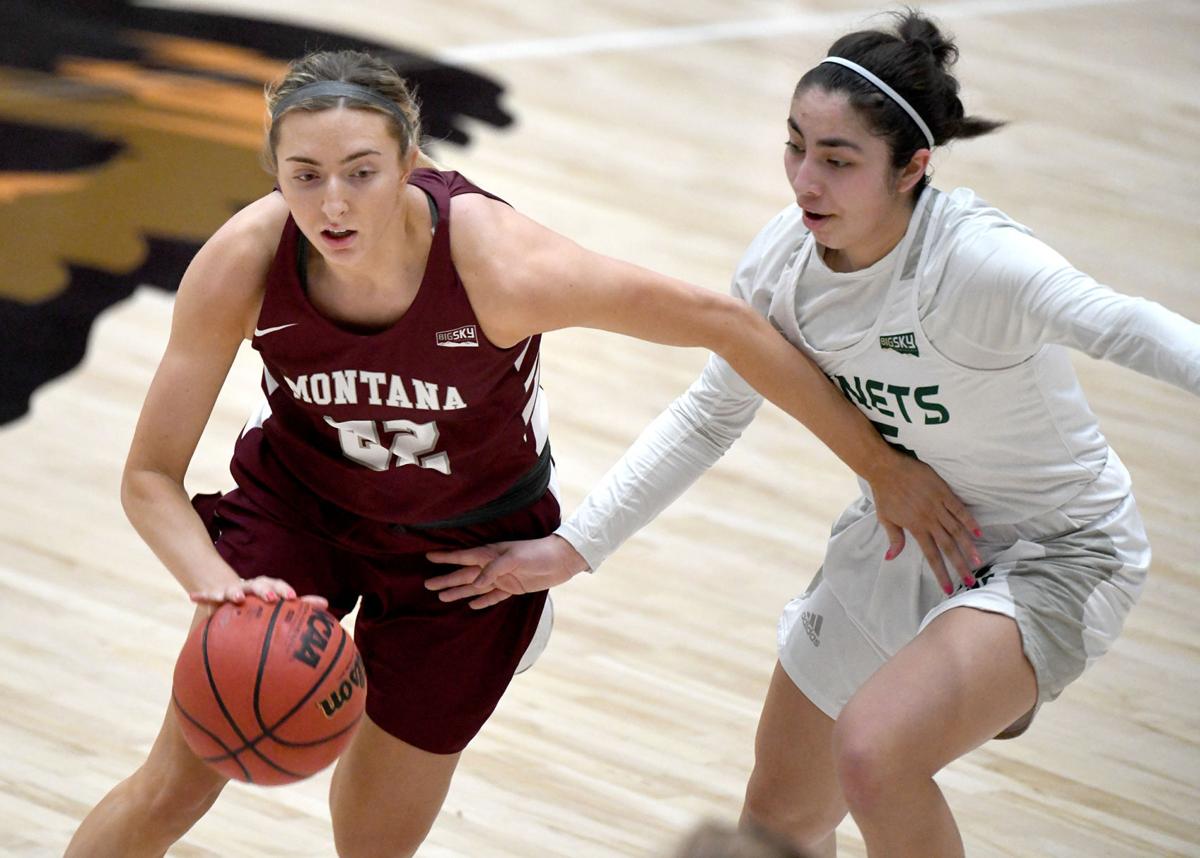 Montana’s Jordyn Schweyen (22) dribbles by Sac State’s Jessica Rios (15) during their basketball game at Dahlberg Arena on Saturday in Missoula. 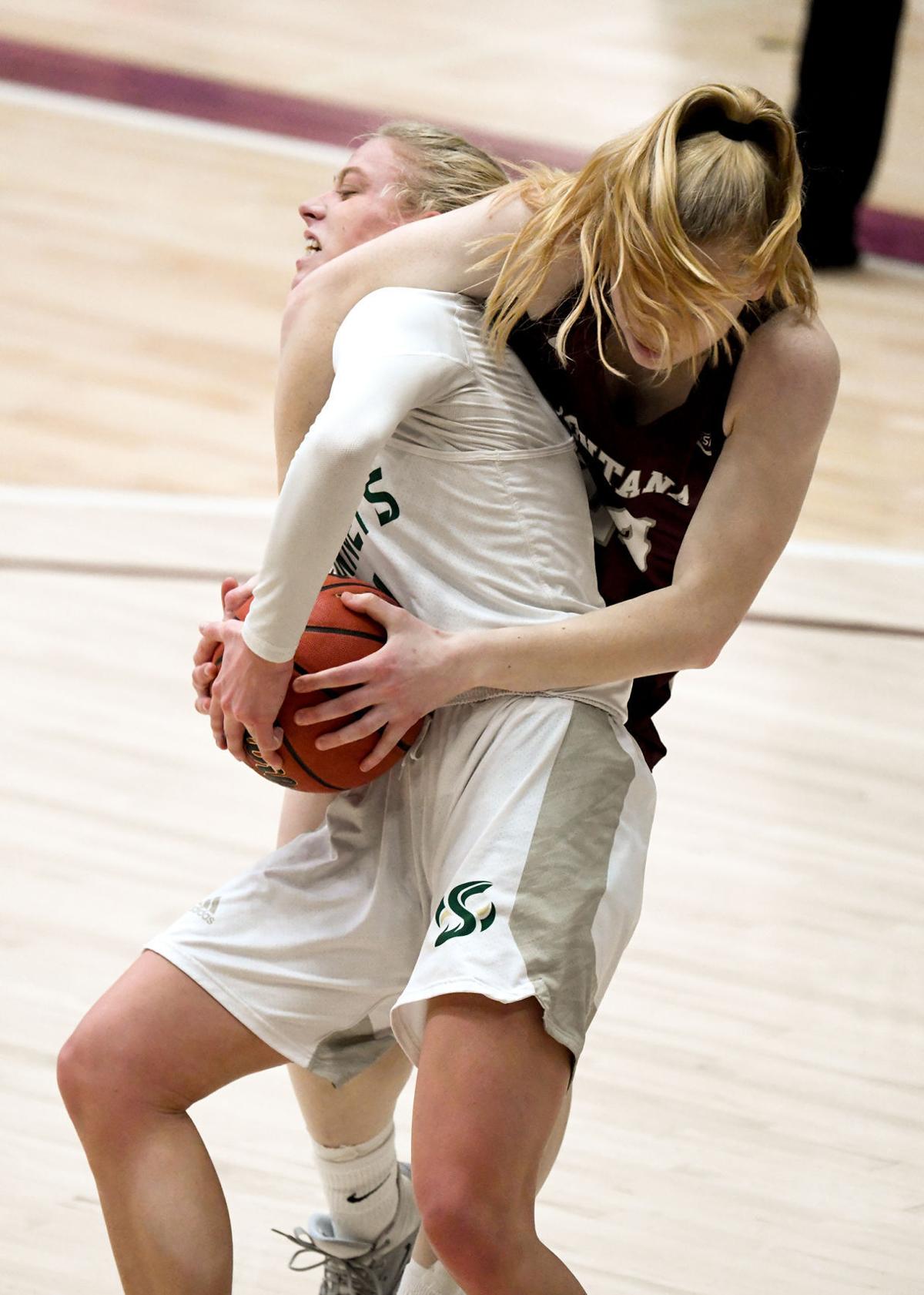 The Hornets took a three-point lead with just under seven minutes left when suddenly the alarm went off for the Lady Griz on both ends of the floor. Abby Anderson scored eight points in the final four minutes, including a layup with 32.9 ticks left that broke a tie, and the hosts held on for a 66-63 win.

Sac State had a chance to knot the score at the final buzzer, but Summer Menke's open look from beyond the 3-point line missed the mark.

"We had a rough shooting day and lost the lead in the fourth quarter, but we never panicked," said Montana coach Mike Petrino, whose team went 23 for 67 from the floor.

"Our kids did a good job finishing. In one of the huddles, I told them, 'You'll learn more from this close game than we will from different kinds of games, so let's just embrace it.' Our kids came up big."

Carmen Gfeller led Montana with 18 points, and Anderson was next in line with 14. Montana owned a 51-39 edge in rebounds, with Gfeller and Madi Schoening each collecting eight.

"We just kind of came together and said, 'Hey, we're a composed team. How many times have we been in close games this year?'" Schoening said of the fourth quarter.

"They didn't really get any good shots at the end, and that was key for us. We knew size-wise we'd have an advantage on them, so we wanted our inside game to take over at that point, especially since our 3-pointers weren't going down."

Montana led almost the entire game, but Sac State refused to go away quietly and took a 56-53 lead on a jumper by Emily Enochs with 6:44 left. Montana responded with a 10-0 run that included six points by Anderson, two by Gfeller and two by Schoening.

Sac State tied the game at 63-63 on a Jazzy Carrasco 3-ball with 47.1 ticks left before Montana answered with an Anderson layup on a nice feed from Schoening. Anderson then grabbed a big defensive rebound, teammate Sophia Stiles hit a free throw to stretch Montana's lead to 66-63 with 13.3 seconds left and the Hornets failed to answer.

"They're hard to keep off the glass. Give them credit for their effort today ... You know you're going to get a physical, hard-nosed battle when you play against these (Montana) ladies."

Sac State stayed in the game Saturday by hitting 10 triples to Montana's one. Carrasco led the Hornets with 18 points, 12 coming on four 3-point goals.

With Saturday's win, Montana maintained a share of third place in the Big Sky with Montana State. Those teams will play twice this week — Thursday night in Bozeman and Saturday afternoon in Missoula.

"We're very pleased, especially since we weren't ranked where we knew we could be," said Schoening, alluding to the fact the Lady Griz were picked to finish sixth in the league standings.

"That's fine. We have eight new kids, so it was hard to know. But we've been chipping away, trying to work up that ladder. (This) week will be huge for us to keep going and moving up there."

Idaho State leads the Big Sky with a perfect 10-0 mark, followed by Idaho at 7-2. The Bengals beat Portland State Saturday, 70-62.

Photos from the basketball game between the Lady Griz and Sacramento State Hornets at Dahlberg Arena, Saturday, Jan. 23, 2021 in Missoula.

Montana’s Sophia Stiles (2) drives to the hoop against Sac State’s Summer Menke (11) and Jakira Wilson (20) during their basketball game at Dahlberg Arena on Saturday in Missoula. The Lady Griz defeated the Hornets, 66-63, to sweep the series.

Montana’s Jordyn Schweyen (22) dribbles by Sac State’s Jessica Rios (15) during their basketball game at Dahlberg Arena on Saturday in Missoula.