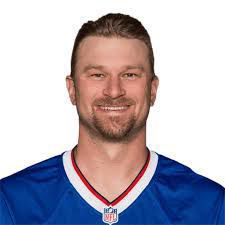 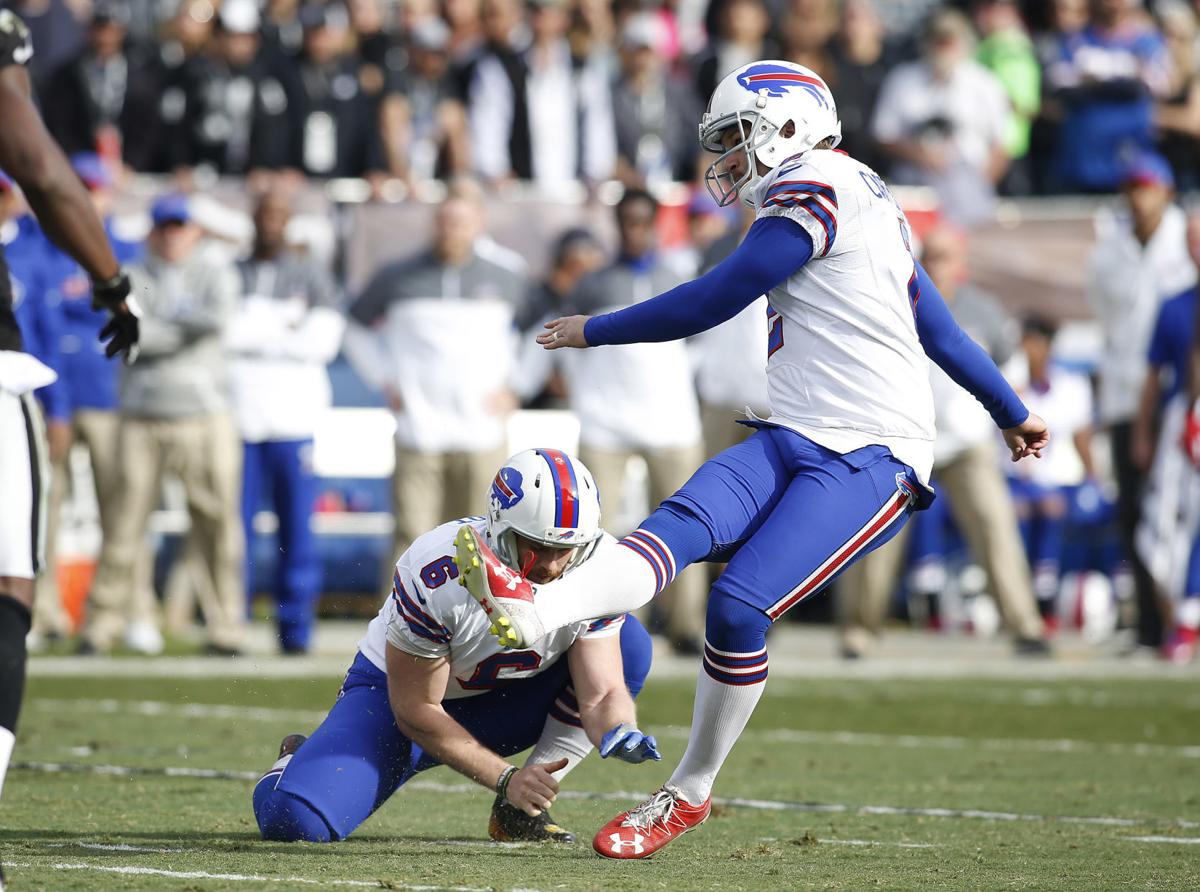 Buffalo Bills kicker Dan Carpenter, right, kicks a field goal against the Oakland Raiders during the first half of an NFL football game in Oakland, Calif., Sunday, Dec. 4, 2016. 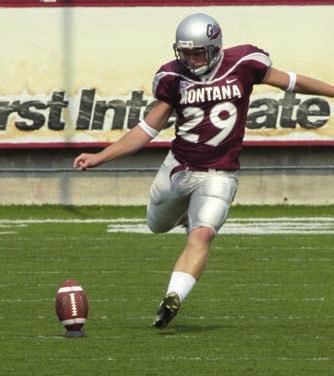 Dan Carpenter kicking for the University of Montana.

HELENA — Former Helena High, University of Montana, and National Football League kicker Dan Carpenter set records at all three levels – high school, college and professionally – and is only the fifth Helenan to play in the NFL.

And now Carpenter, who was selected to the Helena Sports Hall of Fame in 2015, is set to be enshrined in the fifth annual Montana Football Hall of Fame, becoming just the third Capital City gridder to be so honored.

As a Helena Bengal, “Carpie” (or “Carp” as he was known to his teammates), established several school marks.

“I guess I was self-taught,” Carpenter answered via email from his ranch in eastern Montana, when asked who taught him how to kick a football. “I played a lot of soccer growing up and that directly correlated into my football kicking. It’s the same swing, just a different ball shape.

“The only ‘kicking’ coach that I ever had was Steve Hoffman, during my rookie year in Miami. He helped me perfect my stroke and aided me in becoming more consistent in everything that goes into kicking a football in the NFL.”

At wide receiver for the Bengals, the versatile Carpenter left the school with season records of 931 receiving yards, bettering Justin Olsen’s 1993 mark of 928; and 13 touchdown receptions, erasing Olsen’s standard of 10. He is also tied with Connor Molloy for the most TD catches in a game (four), and shared the No. 2 spot with 15 career TD grabs.

Carpenter’s achievements earned him the rare distinction of a three-way All-Stater in 2003, garnering first team at kicker and receiver, and second team punter.

“He has always been a hard worker and a great competitor, and that work ethic and competitiveness carried over into college and the NFL,” said former Helena football and track coach Tony Arntson. “The amazing thing about Carpie is that he never attended any of those expensive kicking schools.”

The multitalented Carpenter finished with eight varsity letters at HHS, while making all-state in basketball and setting the Bengals’ track and field record in the javelin throw, with a heave of 172-feet-5.

“The thing that I remember the most about playing in high school was the fact that my coaches gave me the opportunity to play multiple positions,” Carpenter wrote. “Coach Arntson, let me play receiver, kicker, punter and even safety in emergencies. I’m just very competitive, and as my career advanced, strictly as a kicker, it was hard to watch the majority of each game from the sidelines.”

At the University of Montana from 2004-07, Carpenter was a four-time All-Big Sky Conference selection, and was twice named first team FCS All-American.

As a freshman, he was part of the Griz’s 2004 national runner-up squad.

Carpenter left Montana as the FCS’ record-holder with 75 field goals, and as the Big Sky’s all-time leading scorer with 413 points, while tying for most extra point kicks, at 182 PATs. His senior year, he was successful on 82.6% of his field goals, connecting on 19-of-23 attempts. He booted 71 punts for the Griz as well, producing a 41.8-yard average.

“The best thing about playing football at the U of M is running out of that tunnel to a packed house of rowdy fans. I’m not sure if there’s a better place to play a football game, and I’ve played in quite a few places,” he related.

When Carpenter was signed by the Miami Dolphins in 2008, he joined John Dolan, Earl “Pruney” Parsons, Bob “Spud” McCullough and Pat Donovan as the only Capital City gridders to play in the NFL.

With the Dolphins from 2008-12, Carpenter set the franchise record for the longest field goal of 60 yards. He was chosen for the 2008 PFWA All-Rookie team, breaking into the league with a perfect 40-for-40 in extra point attempts. The next year he was selected to the 2009 Pro Bowl.

“Making the Pro Bowl my second year in the NFL was pretty cool,” he said. “I got to meet and play with guys that were the best of the best in the NFL at that time. It was pretty special to be considered one of those players.”

In 2015 he was the NFL’s second leading kicker, with a franchise record 34 PATs, which he surpassed his final season with 40 successful extra point attempts. His top scoring season came in 2014, when he amassed 133 points, with 34 field goals and 31 PATs.

Since his retirement from professional football, Carpenter, 34, and his wife Kaela, have “enjoyed operating” a cow-calf ranch near Plentywood.

“You learn something new every day. We’re lucky to be surrounded by a quality group of family, friends and neighbors that are willing to help if we ever have a question or need a helping hand,” the father of two related. “That’s one of the greatest aspects about living in a small rural community – the majorities willingness to drop what they’re doing and help a neighbor.

“Kaela and I chase the kids around for school and activities like most other parents these days, help in the community when we can, and enjoy the outdoors every spare moment we get,” he added.

Helenans previously selected to the Montana Hall of Fame were Pat Donovan (2016) and Bob McCullough (2019).

Curt’s Replays: Looking back at the careers of coaches Paull, Tipton and Patterson

This week, Curt looks back on the careers of three, dedicated local high school coaches who have decided to step away.

The additions of two sanctioned high school sports were approved at the MHSA's annual meeting.

Helena Capital win another battle of unbeatens against Missoula Sentinel

Winning big games is becoming old hat for Helena Capital this season and the formula always seems to be the same: Great defense and Mara McGinley.

The Helena Capital boys basketball team went into Saturday looking for a signature win and got it against No. 2 Missoula Sentinel.

Earlier this week, Helena Capital's Noah Kovick topped the Class AA wrestling rankings and this weekend at the Jug Beck, he showed why.

It is the second such incident in 11 months involving Columbia Falls and Browning.

Editor's note: Box scores will be added as we receive them tonight.

MISSOULA — Helena High senior Hayden Ferguson is a versatile football player, lining up at running back, wide receiver, tight end, quarterback and linebacker, helping him land a preferred walk-on offer from Montana State, although he hasn’t made a college decision yet.

An offensive explosion led to a fun night in the Jungle for the Helena High girls basketball team.

Helena High's Eric Peterson is an accomplished head coach and this summer, he could be adding a national award to his resume.

Rocky basketball teams happy to be home, but Carroll spoils the party with sweep of Battlin' Bears

Rocky and Carroll played two Frontier Conference thrillers atop the new gym floor at the Fortin Center in Billings on Wednesday.

Buffalo Bills kicker Dan Carpenter, right, kicks a field goal against the Oakland Raiders during the first half of an NFL football game in Oakland, Calif., Sunday, Dec. 4, 2016.

Dan Carpenter kicking for the University of Montana.