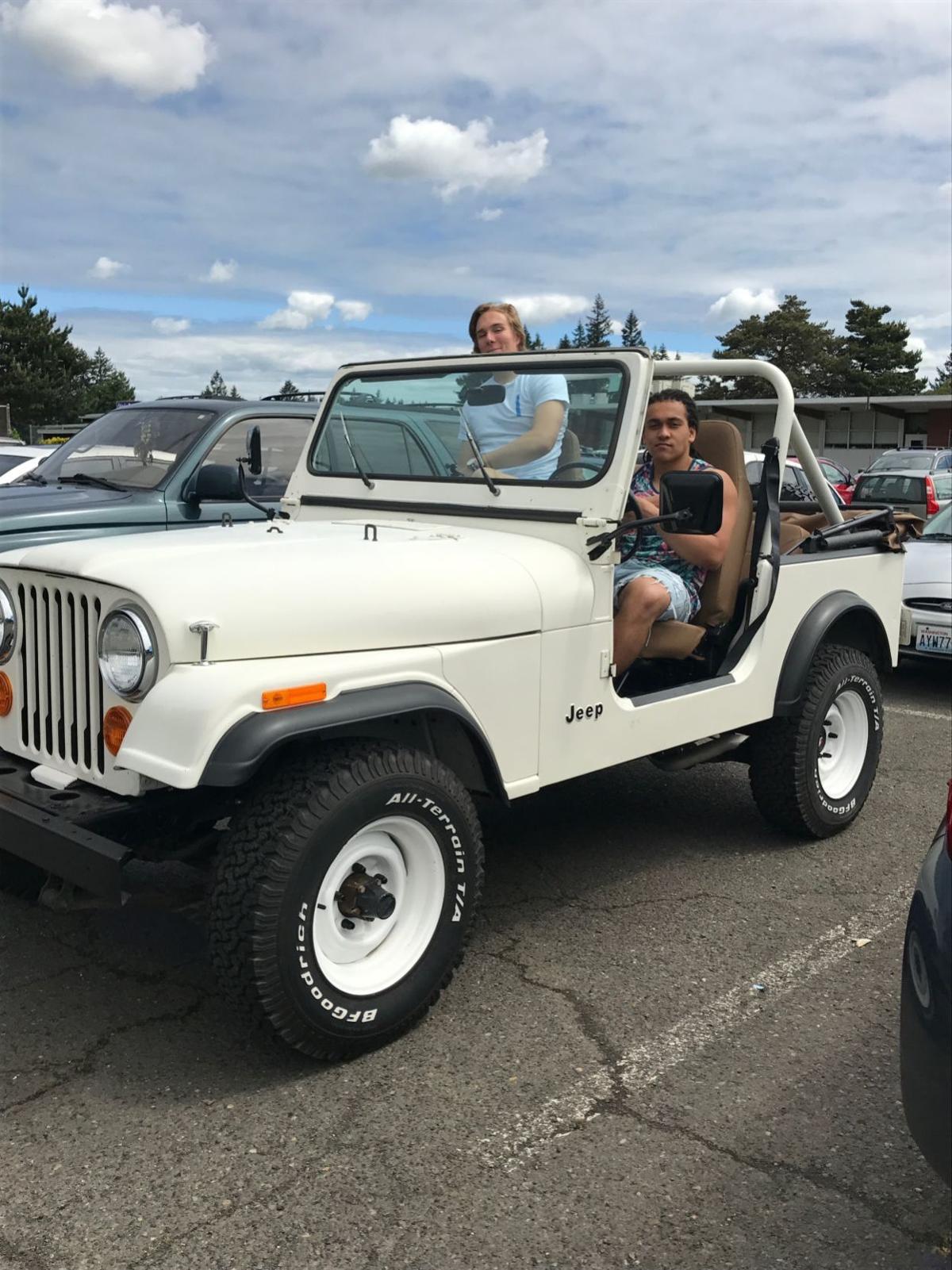 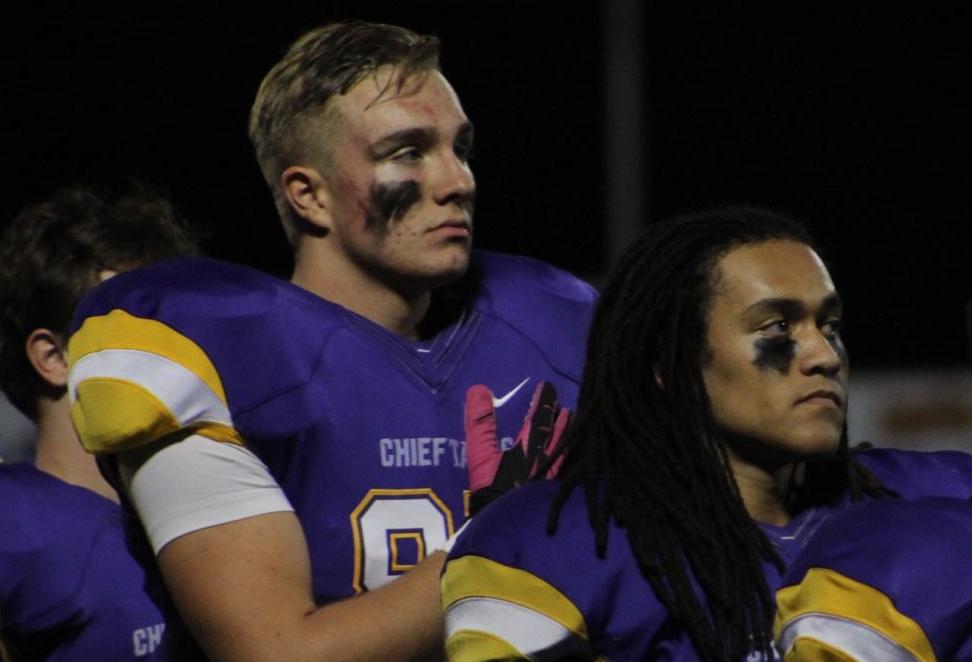 Incoming Montana player Beau Braden (tallest) and Hunter Pearson stand in their football gear preparing for a high school game. Braden, who's transferring to Montana from Washington State, has played in memory of Pearson, who died in a drowning accident two weeks before he was supposed to graduate and go on to play football at Utah State. 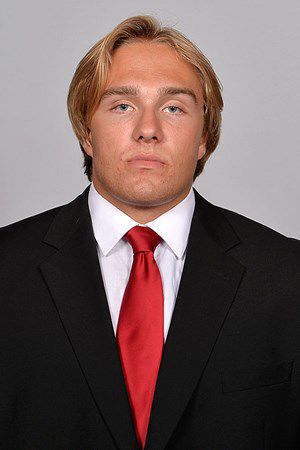 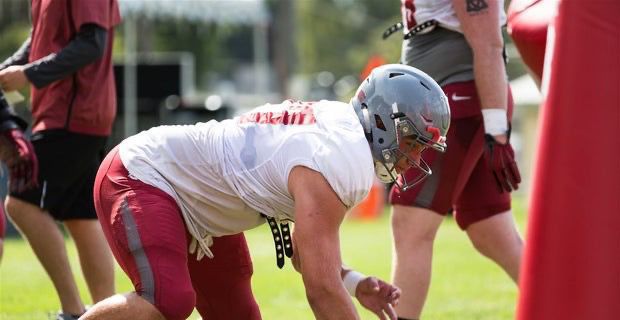 Braden takes part in a practice at Washington State.

MISSOULA — Beau Braden didn’t feel like he was living up to the promise he made over two years ago.

The Washington native spent those two years with the Washington State Cougars, but he never saw the field. He went through practice after practice but couldn’t get even one snap in a game.

Braden missed playing and didn’t feel he was living up to his potential. It was a lot to handle, especially when he went into college having dedicated himself to playing with a purpose as he carried on the memory of his friend who was also supposed to play NCAA Division I football but died months before his freshman season.

When those opportunities didn’t come, Braden felt like he was letting down his late friend. So he decided to transfer.

He ended up committing to Montana earlier this month with the intention of earning playing time, if not a starting spot, on the defensive line.

“I wanted to prove to myself and to him that I can play college football, not just practice it,” said Braden, who will be a redshirt sophomore this fall and will be immediately eligible to play as an FBS dropdown.

That “him” is Hunter Pearson. He and Braden became best friends after Braden transferred to Columbia River High School in Vancouver, Washington, before his sophomore year.

Pearson got along with everyone, his former high school coach, Christian Swain, said. But he became closest with Braden. They worked out nearly every day at New Athlete, a local gym, after team workouts or practices at school.

Pearson became an all-league running back and was heading to Utah State in the fall of 2017. But two weeks before he was set to graduate, he died in a drowning accident in Lacamas Lake.

Pearson’s death shook up the team and the community, especially Braden. It took a toll on him that summer and left him feeling depressed.

It wasn’t until he got back in the locker room ahead of the 2017 fall season that he saw most other players were similarly affected, so he took on a leadership role. They weren't simply going to get over the death, but they had to find ways to move on. It was the type of action Swain knows Pearson would’ve taken in a similar situation.

Braden was a year behind Pearson, so he still had another season to play. He was going to be doing it without his best friend anyway with Pearson at Utah State, but the way his friend left made an indelible mark.

The team turned Pearson’s locker into a memorial. His jersey, helmet, cleats, gloves, a water bottle and photos of him playing were placed in the locker. A light inside shined on everything, and plexiglass was bolted onto the front of the locker to preserve it.

Braden had the locker next to Pearson, so he had even more of a constant reminder to play with a purpose.

“Every time you’re putting your pads on for practice or getting taped before a game, you’re thinking about him,” he said. “It wasn’t just myself I was representing on the field but him as well. It was tough, but to be able to go out there and say that I’m doing it for him was a cool experience. For his parents to watch along and see that was cool as well.”

Braden did that as a senior, replicating his status as an all-league defensive lineman. He also earned all-state honorable mention as an offensive lineman after moving from tight end.

Swain asked Braden to play on the line because they were depleted. He didn’t force him to move, and Braden’s decision to do what was in the best interest of the team reminded Swain of Pearson, who was about actions, not words.

“I think he really wanted to be the next Travis Kelce. He loved tight end,” Swain said. “But that was the type of person Hunter was: if you would’ve asked Hunter to play offensive guard, he would’ve done it, if it was what was best for his teammates.

Braden suffered a torn labrum that year and eventually had to get surgery. He still got an opportunity to walk on at Washington State and jumped at the opportunity to go to the type of high-level program he knew would’ve made Pearson proud. He was even gifted with the first Hunter Pearson Memorial Scholarship handed out by Pearson’s parents.

In the Pac-12, Braden never got to taste that success he and Pearson sought. He tore his meniscus in a knee his first year and had to have surgery. He then needed to have labrum surgery again this past fall.

That was his third surgery since he last played in a game as a high school senior. He was discouraged. The thought of quitting dashed across his mind. But he knew he couldn’t let down Pearson.

“I think a lot of guys at that point will say, you know, ‘I’ve made it this far, I can say I’ve done it,’ but it’s not just about me,” Braden said. “It’s bigger than me. It’s about Hunter and his parents, Marina and George, and what they didn’t get to see their son do. I made that promise to him that I’d be able to go on and see what he worked for and those fruits of his labor that he wasn’t able to see."

Braden will try to fulfill that promise at Montana. He knew all about the Griz before he entered the transfer portal and contacted defensive line coach Barry Sacks.

He tried to play at Montana out of high school while he was getting Division II and NAIA offers before the walk-on spot at Washington State became available late. He attended Junior Day and a spring game, received game-day invites but couldn’t make it to Missoula, and ended up not getting offered by former coach Bob Stitt.

“Maybe if I got that, I would’ve been there all along,” Braden said. “I’m excited to get out there now.”

Braden wasn’t able to visit schools because the recruiting dead period was extended during the coronavirus pandemic. Fortunately, he had already been to Montana and was impressed.

He also checked out video highlights of Griz games online and was more enthralled with the home environment he saw there than with what he experienced at Washington State.

“From the clips I’ve seen of game day, that’s Power Five football. Yeah, it’s FCS, but that’s what Power Five football looks like on game days, and that’s a special place,” Braden said. “When you play, you want it to matter, and I think it really matters to fans of the Griz. I’m just really excited to see that. I loved my visits out there. I’m a city boy from Vancouver, Portland, but I love Montana and I definitely think I’ll grow to become a local.”

That atmosphere was a big selling point, but so too was the prospect of playing time while learning from an experienced staff. He also likes the relationship he's built with Sacks.

“I don’t think there’s any place like Montana, especially this level,” Braden said. “Always being in the top two of fans at games, just the history of the program, the elite coaching staff, the amount of guys that come from my area, the guys that they put out into the (NFL), it’s a really special place that I can’t wait to be a part of.”

Braden comes from a family of athletes who've exceled. His dad swam at Washington, his mom swam at Oregon State, an uncle ran track at Washington State and another uncle played baseball at Seattle.

The athletic, versatile Braden will come to Montana as a 6-foot-4, 261-pound defensive lineman who feels he can move around the line, playing either end or tackle.

“He’s got a great motor,” Swain said. “You can kick him inside and let him play the 3-technique or you can play him outside as a defensive end. He plays really hard. He’s long, he’s athletic, so I think he’ll be versatile, he’ll be able to play multiple positions along the line. He’s got great work ethic, great attitude, so I’m sure coach Sacks will enjoy working with him.”

Braden felt he grew as a player during his two years on the scout team at Washington State despite the injuries. He went up against first-round draft pick Andre Dillard, an offensive lineman who was taken 22nd overall in 2019. When he rotated to the other end of the defensive line, he went up against Abraham Lucas, a projected draft pick in the future.

Braden developed moves he didn’t know in high school. His confidence as a player grew when he occasionally beat those big-time linemen on plays, even though those successes never translated into playing time.

“Going from small ball to those guys, it’s a big shock, but it was huge for my development,” Braden said. “There’s a whole level of gear that I didn’t know I had before.”

Braden will now try to bring those skills to Montana as a self-described athlete who likes to play fast and with high energy.

“I’m somebody who loves football and will do whatever it takes to win,” Braden said. “I loved Washington State, but I wasn’t getting the opportunities to play. It goes to show that I just love football, and you’re going to see that on Saturdays. I really just enjoy what I’m doing, and I want to be good at it. I want to be great.”

He’ll be trying to do that with a new name on his chest and for a new fan base but with the same love for his late friend. He'll continue to symbolically wear that Pearson No. 30 jersey in his heart no matter what number or color jersey he wears, trying to fulfill a special promise.

"When I’m out there on Saturdays, I’m wearing that Hunter Pearson No. 30, too," Braden said. "It’s not just my name on my back but his as well.”

Where Are They Now: Derek Selvig making his own name as a coach at Montana Tech

Montana got a commitment Sunday from a former Arizona defensive end who's started 26 games in the Pac-12.

Montana soccer coach Chris Citowicki is thankful for all the freedoms and opportunities the United States has given him, and he'll be celebrating that on his first Fourth of July as a US citizen on Saturday.

Where Are They Now: Derek Selvig making his own name as a coach at Montana Tech

Incoming Montana player Beau Braden (tallest) and Hunter Pearson stand in their football gear preparing for a high school game. Braden, who's transferring to Montana from Washington State, has played in memory of Pearson, who died in a drowning accident two weeks before he was supposed to graduate and go on to play football at Utah State.

Braden takes part in a practice at Washington State.