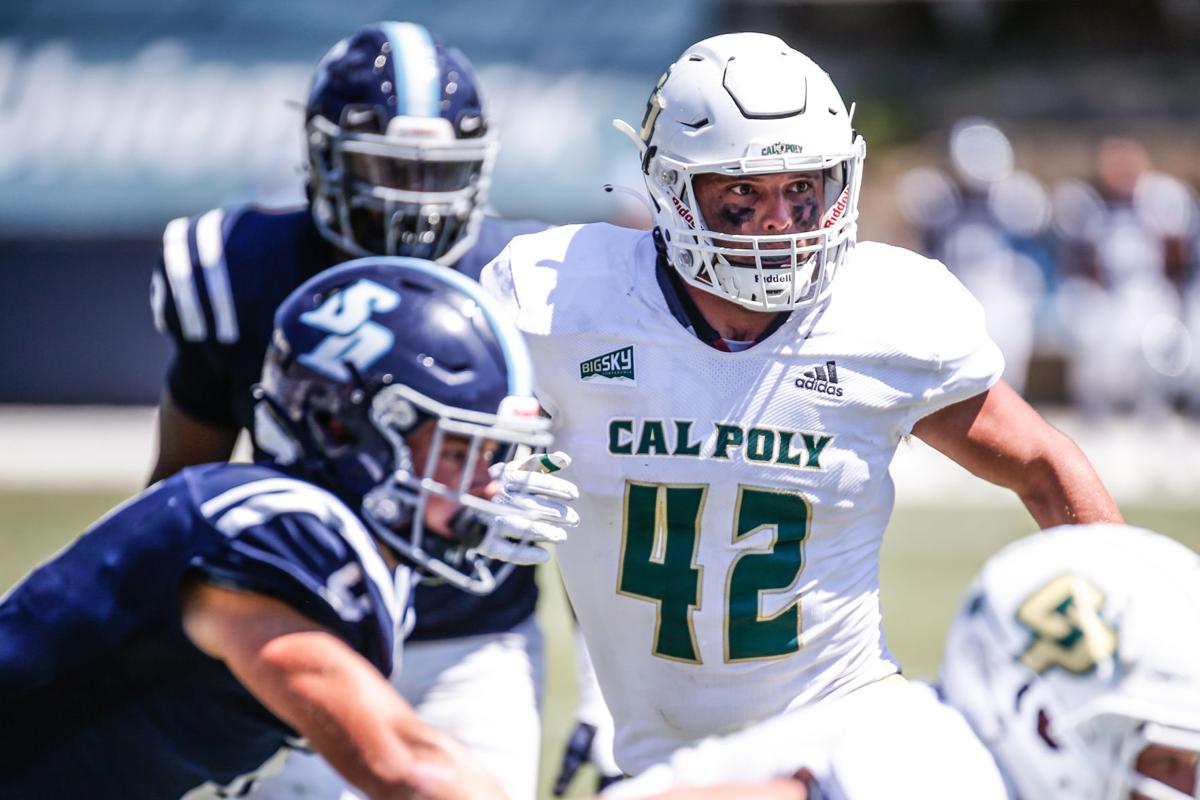 Cal Poly linebacker Matt Shotwell (42) plays in the win over San Diego on Sept. 4 in San Diego. Shotwell is the fourth of four brothers who've played football for the Mustangs. 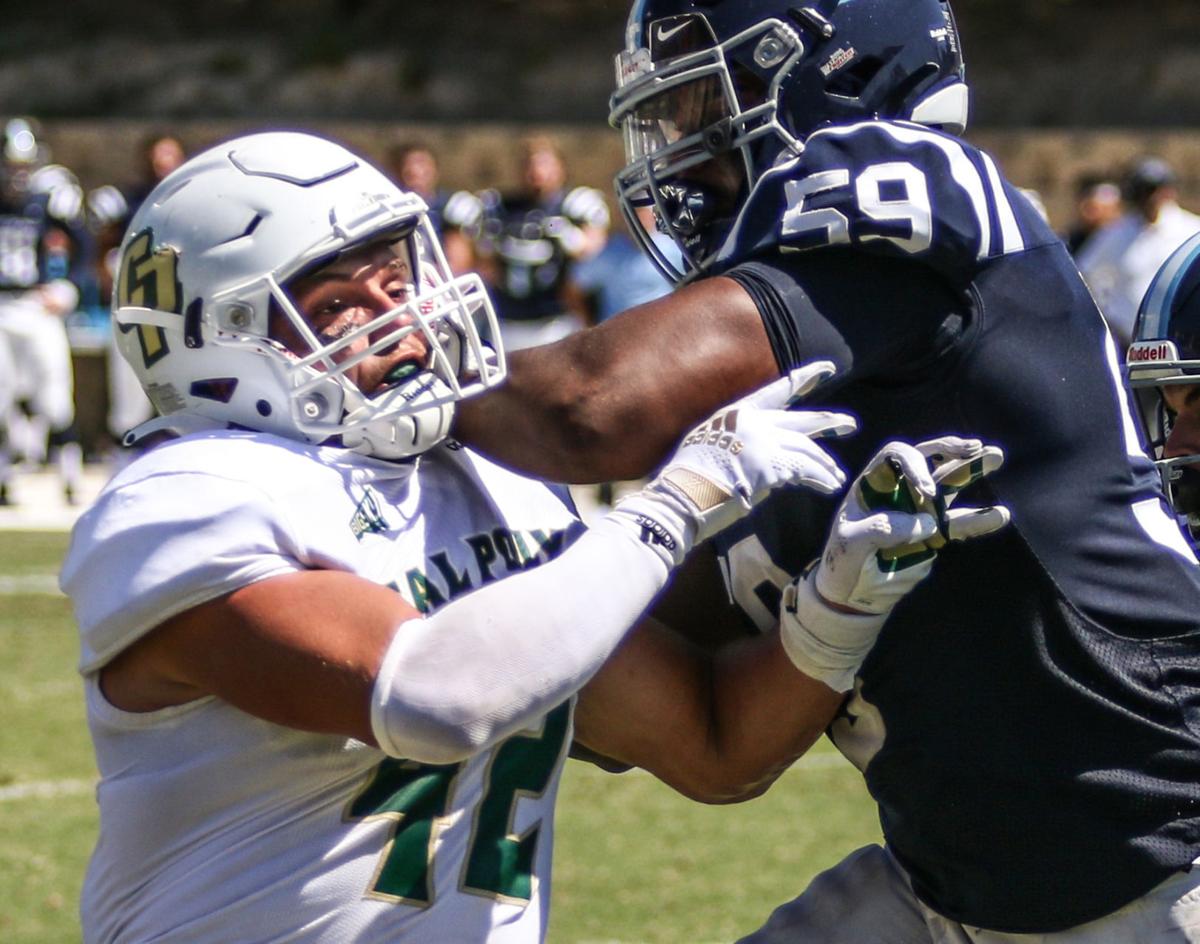 Cal Poly linebacker Matt Shotwell (42) plays in the win over San Diego on Sept. 4 in San Diego. Shotwell is leading the Mustangs in tackles for the fourth consecutive season.

MISSOULA — Matt Shotwell can still remember following along with Cal Poly’s victory at Montana in 2005 from his home in California.

Shotwell, a fourth-year starting linebacker for the Mustangs, was 7 when his oldest brother starred for the Cal Poly team that upset the Griz that year in its first-ever trip to the playoffs, ending an 0-10 start to the series against UM. He’d later make a trip to Missoula in 2009 to watch his two older brothers play the Griz, albeit in a defeat while enduring 25-degree temperatures.

Shotwell has been adding to the family legacy as a high-volume tackler at Cal Poly and will make his first visit as a player to Washington-Grizzly Stadium when Montana hosts the Mustangs at 1 p.m. Saturday.

“As even a fan from the opposing team, you could feel the atmosphere there and the energy the crowd brings. It’s an exciting place to play football,” he said. “When you think about FCS football, Montana is right up there in how successful Montana has been as a program all these years. It’s a great test, and I’m really excited about coming up.”

Football is in Shotwell’s DNA. His brother Kyle Shotwell won the Buck Buchanan Award as the best defensive player in the FCS while playing at Cal Poly from 2003-06. Two other brothers, Ryan Shotwell and Troy Shotwell, played there from 2006-09 and 2008-11. His father Steve Shotwell had played in the Pac-12 at Cal as a teammate of longtime NFL head coach Ron Rivera.

There was little doubt Shotwell was going to end up at Cal Poly given his lineage and dreams of playing there as a kid. He still sent recruiting film to Montana, as well as every other Big Sky school, but never heard back.

“I have a feeling that most of them said, ‘Hey, you’re definitely going to go to Cal Poly,’” he offered. “It kind of set me up for where I am now. I’m happy about it. I was trying to explore every option, but I understand now that it was probably kind of set in stone when I was doing the recruiting process, like, ‘Hey, you have a legacy going on, don’t ruin it,’ kind of thing. That’s my interpretation, or maybe they just didn’t think I was good enough. So, we’ll see.”

The Mustangs are glad to have Shotwell heading up their defense once again. He’s leading them in tackles for the fourth straight season, even as he moved from strongside to weakside linebacker in the spring. He ranks 17th in school history with 247 career tackles and is on pace to finish fourth, one spot behind his brother Kyle.

Shotwell earned All-Big Sky honorable mention status in 2018, was a third-team pick in 2019 and landed on Phil Steele’s preseason second team this fall. He was also voted a team captain. Cal Poly coach Beau Baldwin isn’t surprised by any of that after getting to know Shotwell since being hired after the 2019 season.

“He’s dialed in, locked in, understanding of not just his position but the other positions, able to communicate and direct people and get them in the right places,” Baldwin said. “It’s unique, and you could probably count on one hand the guys that have his ability to just have that overall grasp on what’s going on and how we’re doing it and not have any brain lapses.”

Shotwell’s ability to get locked in mentally reminds Baldwin of J.C. Sherritt, who won the 2010 Buck Buchanan Award while playing for him at Eastern Washington. Sherritt is now Shotwell’s position coach and defensive coordinator, sharing his football knowledge. It pairs well with the life lessons he’s learned from his brother Kyle, a linebacker who was on five NFL practice squads.

Baldwin had designed offenses that tried to beat all three of Shotwell’s brothers while at EWU; Ryan and Troy were both defensive linemen. Montana coach Bobby Hauck also coached against them and has been impressed by Matt’s good tackling ability and how hard he plays after facing him in 2018 and watching recent film.

“It seems like there’s been a bunch of those guys there. I hope this is the last one,” Hauck joked about the Shotwell family. “They’ve all been good players, and he is too.”

There aren’t any Shotwells on the horizon to be joining Cal Poly — at least anytime soon. Matt has a couple nephews who are 3 and 4 years old, he said, so it could be a while.

He's hoping Cal Poly can be in a better place by then after going 10-29 overall and 7-20 in Big Sky play since the start of 2017, Shotwell's first year playing. That's one reason why he delayed his plans of becoming a police office and return for a final season, taking advantage of the NCAA’s extra year of eligibility because of the pandemic after Cal Poly played in only three games in the spring.

“Not being able to play in front of my friends and family really impacted that decision,” he said. “I felt like I owed it to them and myself to have one full senior year, no matter how it went.

“Most importantly, to try to help this program keep building, hopefully be that foundation, to come back with my kids and say, ‘Hey, they’re successful because I was here in the beginning.’ Not just me, but the team we created, the culture we created.”

Montana's defense has hit a rough patch after a dominant start to the season.

Cal Poly linebacker Matt Shotwell (42) plays in the win over San Diego on Sept. 4 in San Diego. Shotwell is the fourth of four brothers who've played football for the Mustangs.

Cal Poly linebacker Matt Shotwell (42) plays in the win over San Diego on Sept. 4 in San Diego. Shotwell is leading the Mustangs in tackles for the fourth consecutive season. 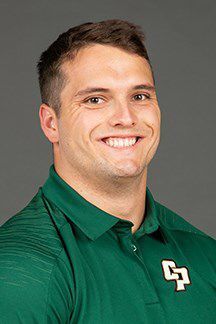