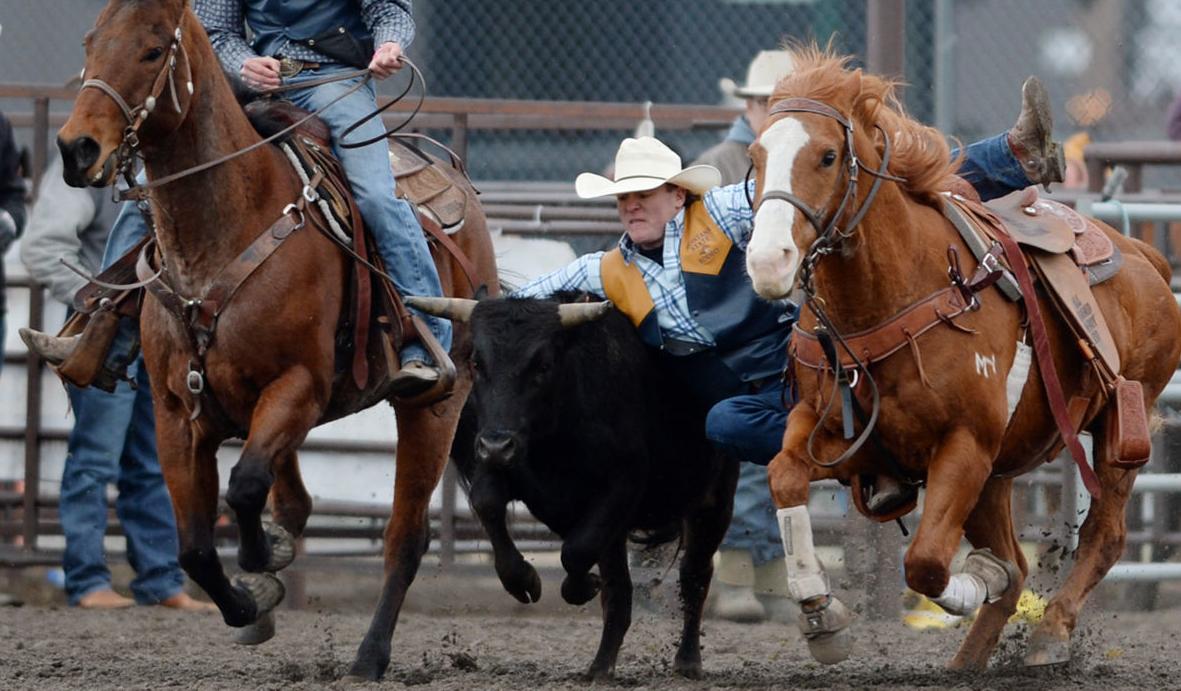 Montana State's Jake Faulkner drops onto a steer at the MSU spring rodeo on April 8 at the Gallatin County Fairgrounds. 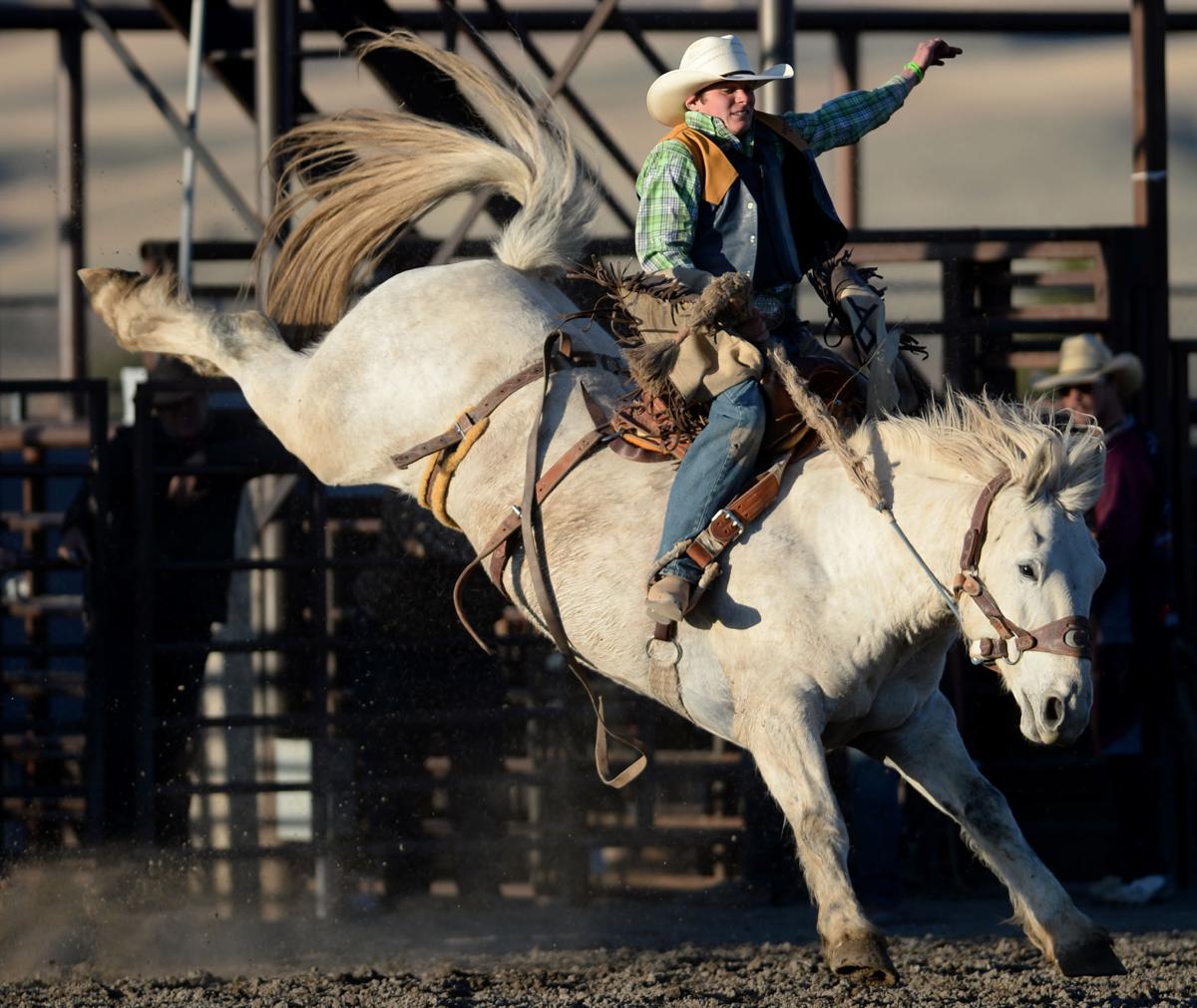 Montana State’s Cody Faulkner competes in the bronc competition during the second night of the MSU spring rodeo on April 9 at the Gallatin County Fairgrounds.

BOZEMAN — As far as team roping partners go, it’s tough to do better than one’s own brother.

Jake and Cody Faulkner have had a great deal of success tracking down steers over the course of their rodeo lives. The brothers from Gooding, Idaho, have one last go at it as Montana State teammates at the College National Finals Rodeo, which begins Sunday in Casper, Wyoming.

In the Big Sky Region this season, the brothers placed fifth in the team roping — older brother Jake as the header, younger brother Cody as the heeler — with 376 points each.

But because Cody, a junior, was second in the region’s men’s all-around standings, he got to pick up a second event to do at CNFR. He’ll steer wrestle by virtue of placing second in that event with 669 points, and he added team roping to his agenda as his second best event. And because of that, he gets to take his older brother to the college finals in his last year at MSU.

“Shoot, Jake I think is one of the best all-around cowboys in the region,” Cody said. “I think it worked out perfect getting to still rope with my brother in his last year and make it to CNFR with him.”

Jake is a fifth-year senior who stayed an extra year after the 2020 spring season was canceled because of the COVID-19 pandemic. He was fourth this year in the men’s all-around, fourth in tie down roping and fourth in steer wrestling — just barely on the outside of the top-three qualifying threshold for CNFR.

Because of that, he’s grateful for the opportunity to make it to Casper to compete alongside his brother one more time.

“It’s special for sure. I’m definitely going to try to value it,” Jake said. “Just getting to qualify together was definitely one of our biggest goals.”

The Faulkners’ best showings of the 2020-21 season came in the second Northwest College rodeo in September, where they placed second with a time of 6.9 seconds, and in the first MSU spring rodeo in April, where they placed first with an average of 16.7 seconds.

Those results, and their standing throughout the season, are the product of a longstanding partnership that only being brothers could truly foster.

“I feel like we have an advantage over a lot of teams because we rope so many steers together,” Jake said. “We probably rope well over a hundred steers together a week, so we have a great feel for what the other is going to do.”

They became roping teammates in high school, when Jake was a junior and Cody was a freshman.

There was some early discrepancy over who would be header and heeler, but Jake said about midway through that season he declared himself the header. The next year, in 2016, the brothers from Gooding, Idaho, won the state’s high school team roping title.

“I think we picked it up pretty fast,” Jake said. “It was about then that it started clicking.”

Cody said he struggled in college rodeo his freshman year. His sophomore year was better, but he didn’t get to see it through to the end because of the pandemic. He said he’s done well this year because of his even-keeled approach and the motivation only a brother could offer.

“He’s just always been the older brother, kind of parenting me but also pushing me to practice and do the best I can,” Cody said. “I came into this year trying to stay consistent and not get ahead of myself on the standings.”

Cody enters the steer wrestling at CNFR with the 16th-most points in the country. He said it’s not his best event, but he’s been fortunate to perform as well as he has.

Cody hasn’t competed at CNFR yet, but he was on the haze horse two years ago when Jake qualified in the steer wrestling.

He’s hoping that little bit of prior knowledge of the atmosphere helps him feel more comfortable once he arrives in Casper.

“I think it’ll be nice that I’ve been in there and been down in the arena and experienced it,” he said. “I think the nerves will still be there when I go in and nod my head.”

The brothers used part of May to travel around and get more reps in before they head to Wyoming. They competed at rodeos in Spray, Oregon, and Hermiston, Oregon, and came up empty in the team roping, but it’s the muscle memory that counts at this point in the season.

“We didn’t have the greatest luck the last weekend, but we did a lot of stuff right and made a little money,” Cody said, “but just going out and being able to rodeo, the more experience before the CNFR the better.”

Jordan Reed was interested in Wyoming when Brent Vigen was offensive coordinator. That changed with Vigen's arrival in Bozeman.

In the Big Sky Conference, only Weber State is ranked higher.

CASPER, Wyo. — The Montana State women's rodeo team increased its lead to more than 100 points Friday heading into the short go at the College National Finals Rodeo in the Ford Wyoming Center.

Four Bobcats will have at least one more week of competition in their season as they chase spots on Team USA.

The Montana State women were 80 points ahead entering the final stage of the third go-round Friday morning in Casper.

Montana State basketball's Bishop, Mohamed and Adamu ready to 'run it back' in extra year

The trio's declarations on social media of their intent to return to Montana State for a final year all came on June 7 and with the same message of “Run it back.”

Moeykens rallied to the title Saturday and helped the MSU women to their first team championship since 2011, and third overall.

Montana State's Jake Faulkner drops onto a steer at the MSU spring rodeo on April 8 at the Gallatin County Fairgrounds.

Montana State’s Cody Faulkner competes in the bronc competition during the second night of the MSU spring rodeo on April 9 at the Gallatin County Fairgrounds.