Montana State head coach Danny Sprinkle calls a play to his team during a game against Montana on Feb. 22 at Worthington Arena. 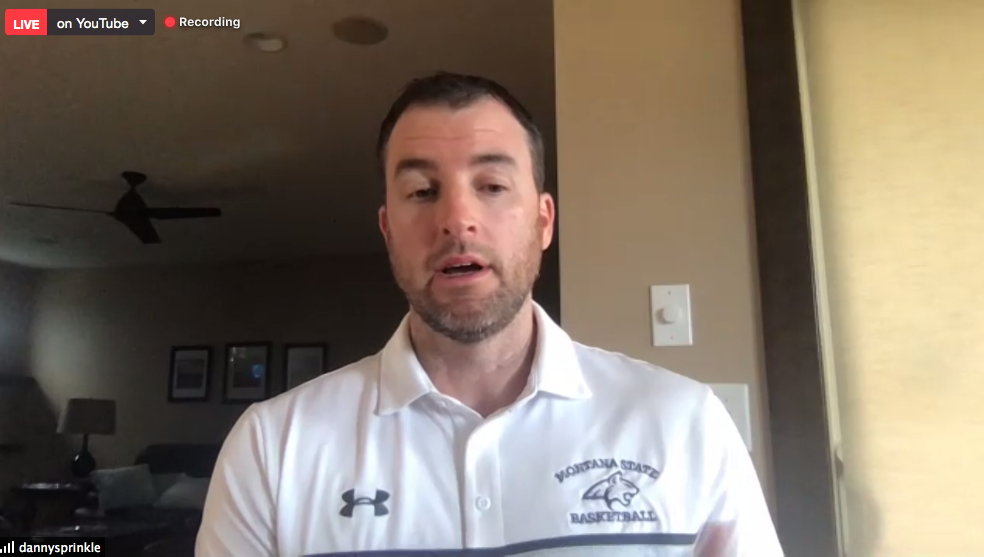 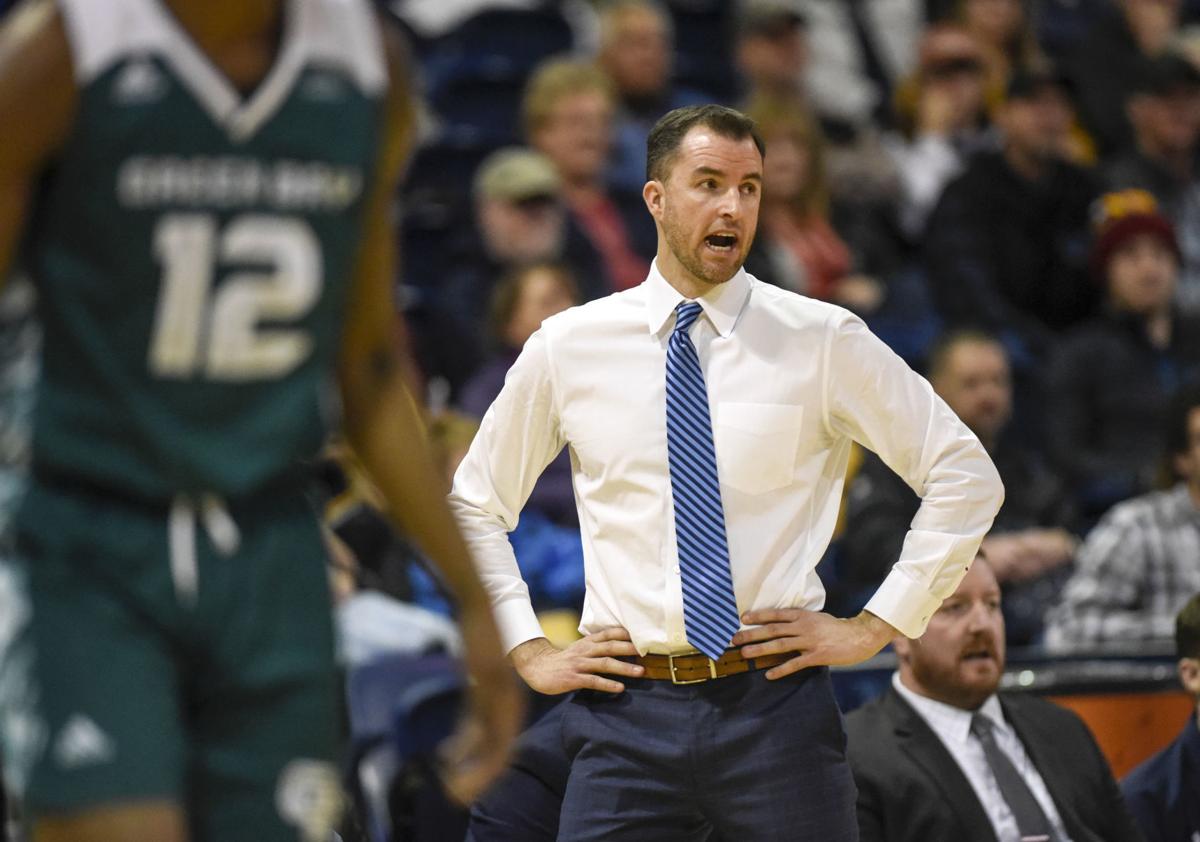 After discussing racial injustice frequently in recent months and participating in a protest in Bozeman, Danny Sprinkle spoke candidly Thursday about his plans to continue covering these topics with his team.

While taking part as one of about 15 speakers on the Social Justice Roundtable, Sprinkle described recent events like the killings of George Floyd and Ahmaud Arbery as “pretty (expletive)” but also viewed a potential positive.

“I think it actually might end up being the best year we’ve ever had as a country because a lot of this stuff would never change,” said Sprinkle, Montana State’s men’s basketball head coach. “If it was just a peaceful protest, it would have been the same thing that’s happened over many, many years. I think the riots and the looting, it has to happen. People have to get angry enough to say, enough’s enough or a lot of bad stuff is going to happen.

“Finally I feel like it has the attention of the country now on a different level. I think that’s what the riots did, which I think in turn is going to hopefully be a good thing.”

Thursday’s four-hour Zoom conference call featured more than 170 participants and was made up of mostly college basketball coaches designed to engage, educate and empower. Sprinkle spoke about racial inequality, possible plans to learn about racism and ways to enact change for his program. The roundtable was also streamed live on Youtube.

Sprinkle emphasized how he needs to educate himself along with all other white people. Even though he works with Black people daily, he wants to learn more historical context and possible ways to improve society. Montana State does not offer degrees in African American or African studies, nor does it have African American history classes.

“I grew up in Montana. We weren’t studying African American history,” the Helena native and MSU alumnus said. “I don’t know what states may do that, I don’t know. But what I do know is not all 50 states are doing that. So not all people are educated enough and in turn, that’s why events like this happen.”

On June 5, Sprinkle marched with his players and assistant coaches in a protest downtown that attracted thousands of participants. He said it was valuable for his players to see the support of nearly 10% of Bozeman’s population standing with them.

In addition to team-wide video calls, the head coach said he’s connected with players individually by talking on the phone and visiting with some in person.

“I need to learn how they’re feeling. Some of them act like they’re not affected, but they are. And some, they’ll let you know their frustrations,” Sprinkle said. “That’s stuff that, as white coaches, we need to know. Because a lot of times, they’ll tell you a lot of stuff, they may not tell us everything.”

During the question and answer portion of the conference, Sprinkle was paired with Southern University assistant coach Ryan Price, who asked Sprinkle about his interpretation of “Black Lives Matter.”

“Black Lives Matter to me means that it’s a white problem. Obviously Black lives matter to every Black person. Now it needs to start meaning something and mattering to everybody,” Sprinkle said. “And it hasn’t for a long time to everybody. That’s what needs to start happening. If I could sum it up in one word, it’s equality.”

Alot of people uncomfortable with all that is going on and don’t want to admit the harsh reality! If you choose to stay silent YOU R PART OF THE PROBLEM.#CoachesStandforJustice #SpeakUp
“In the end we will remember not the words of our enemies but the silence of our friends”
MLK pic.twitter.com/CctNCMGz7r

Sprinkle noted how Black people aren’t seeking revenge after the institutionalized injustices taken against them for 400 years, but rather just to be treated equally.

While recruiting at various high schools throughout the country, Sprinkle pointed out how he’s observed disadvantages Black students may face, like not having enough food to eat or being in poor learning environments.

“Yet they’re expected to exceed at the college level just like everybody else,” Sprinkle said. “They’re expected to score high on the SAT, ACT just to get into school. And it’s not a level playing field. … I’ve seen that firsthand. Not everybody in Montana has seen that. Until you really do, it doesn’t really make the impact on you that it needs to.”

Sprinkle then asked Price what tangible action could he take as a white head coach to improve his program in regard to race relations.

The Southern assistant emphasized listening. That includes showing compassion by spending time with players and making sure they know Sprinkle is there for them. Price also touched on education through reading books and watching documentaries.

Sprinkle mentioned Bobby Braswell at Cal State Northridge and Dedrique Taylor at Cal State Fullerton, his two biggest coaching mentors when he was an assistant coach for almost 20 years. Both African American, they helped teach Sprinkle what they go through on a daily basis.

So Sprinkle wants to keep the conversation going beyond the recent protests to ensure tangible, long-term change is made.

“It’s not a race issue. It’s right vs. wrong,” Sprinkle said. “There’s been a lot of wrong going on that needs to be righted.”

Tom Wistrcill is confident college sports will start. He’s not sure when.

One contingency that has seemed to gain traction of late is the idea of pushing the football season back to the spring.

Big Sky officials were prepared to react to the decisions of higher-level conferences like the Mountain West and Pac-12 as the coronavirus pandemic ensued. Many contingencies were ready.

MISSOULA — As more student-athletes have begun to enter their respective workout facilities at Montana and Montana State, there is tentative optimism among campus leaders their protocols are working.

Redshirting last season, Jaharie Martin was eager to take the field more often. In glimpses, the young Montana State running back showed capable of fitting in with the Big Sky’s leading rushing attack.

The Bobcats lost some talented receivers to graduation, but there is no shortage of promise with the group for 2020.

Not many things in Josh Perkins' life arrive conventionally.

Montana State head coach Danny Sprinkle calls a play to his team during a game against Montana on Feb. 22 at Worthington Arena.