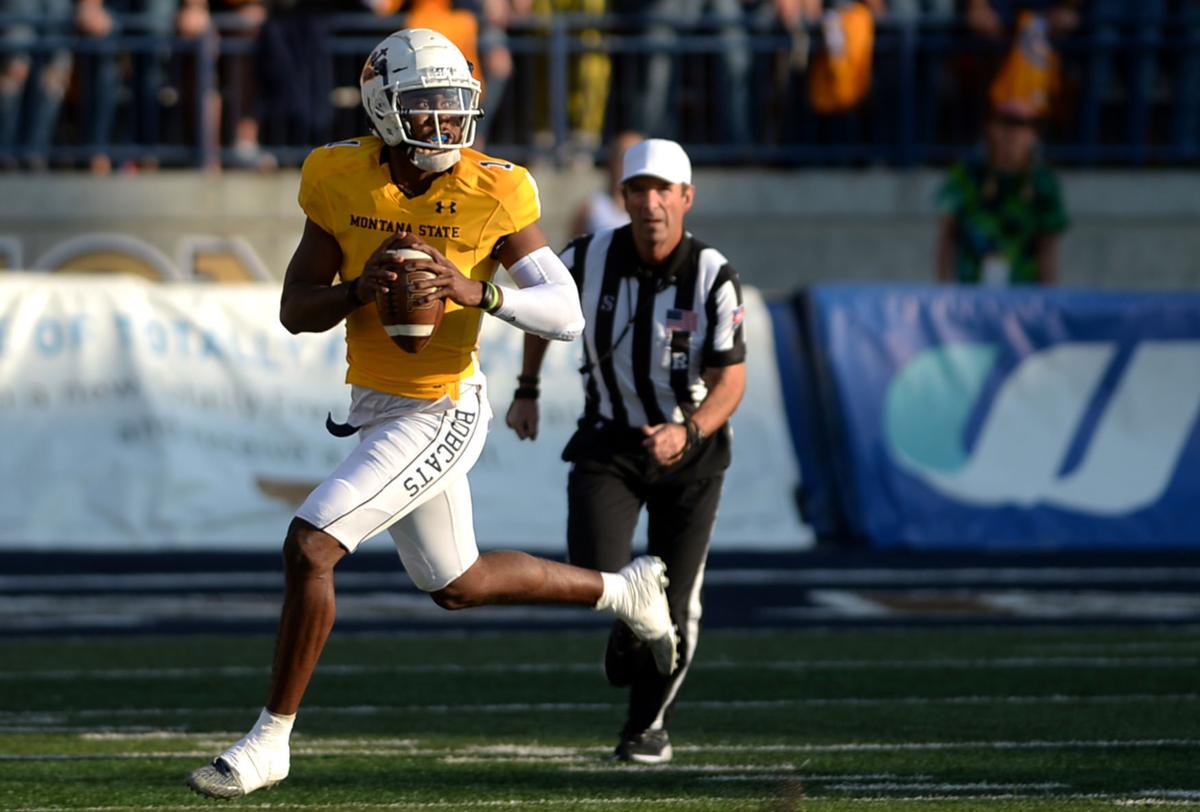 Montana State quarterback Matthew McKay looks for a pass against Drake on Sept. 11 at Bobcat Stadium. 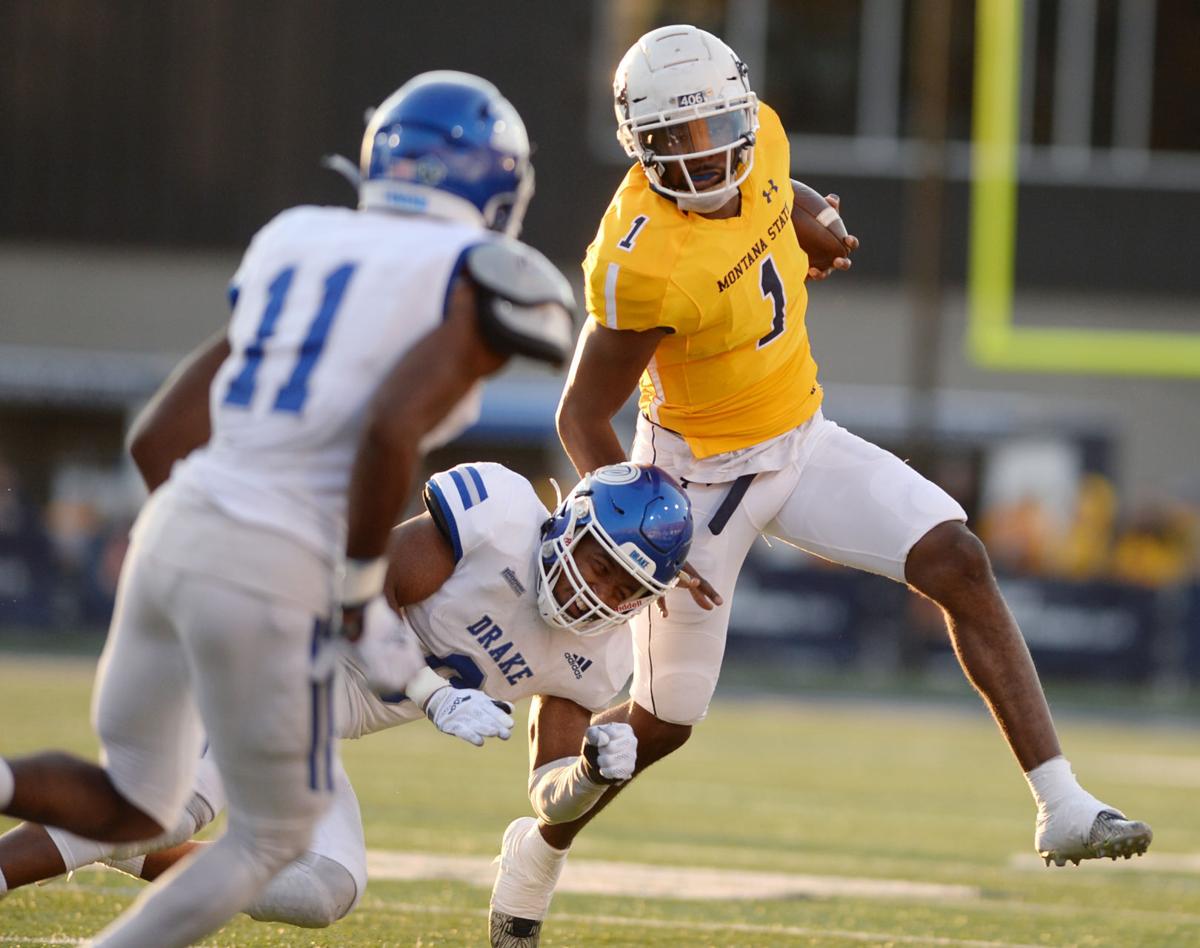 TOP: Montana State quarterback Matthew McKay runs against Drake on Sept. 11 at Bobcat Stadium. ABOVE: McKay breaks free on a run against San Diego on Sept. 18. 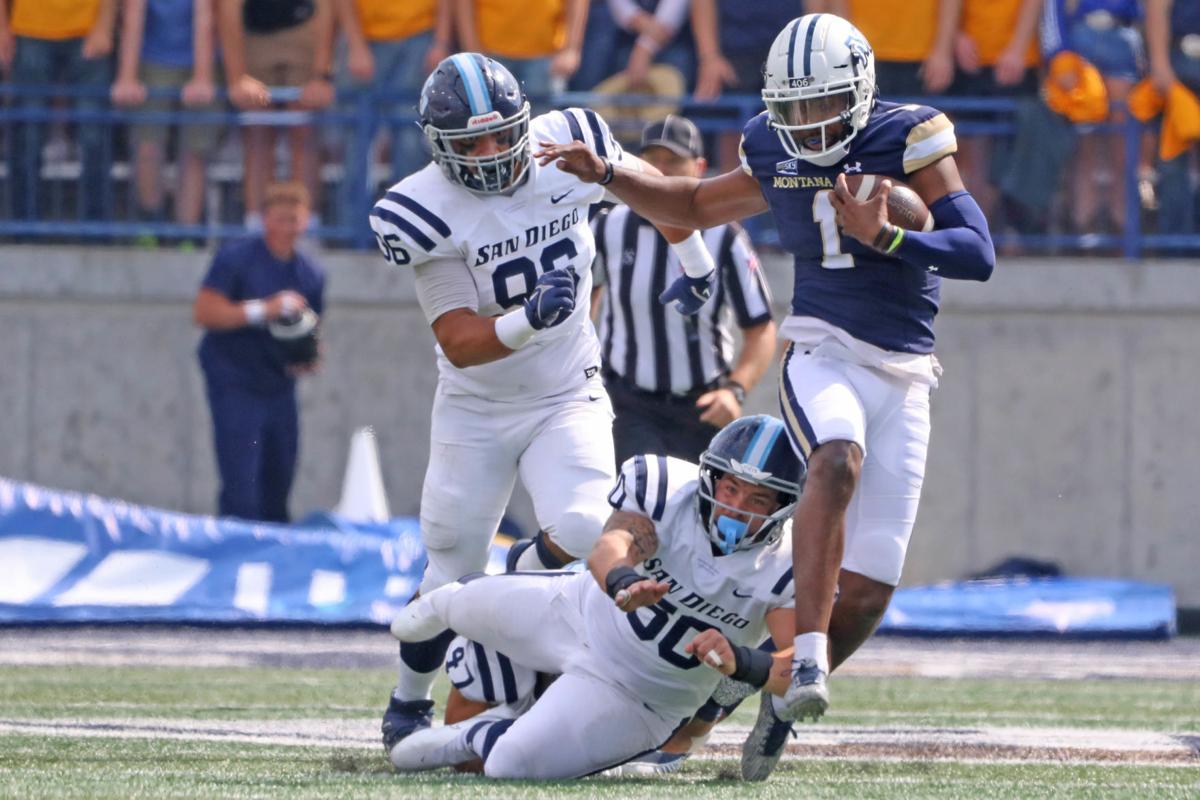 As Matthew McKay looked downfield, he thought he had a shot to throw deep to Lance McCutcheon along the right sideline.

But McKay and McCutcheon weren’t thinking in sync, a rare sight. McCutcheon cut while McKay let his pass fly, and it landed in the hands of a Portland State defender.

McKay and McCutcheon spoke after and expressed confidence that the next time McKay targeted him, the play would work. MSU head coach Brent Vigen said the pick was McKay’s fault, and the quarterback confessed those mistakes can happen.

But they haven’t for him very often. McKay’s interception was his first for Montana State.

McKay’s comprehension of MSU’s offense, his decision making and accuracy have been instrumental to the team’s success thus far. McKay’s avoidance of turnovers, except for his first and only one last week at Portland State, have helped keep the Bobcats in control of games.

MSU offensive coordinator and quarterbacks coach Taylor Housewright compared playing QB to boxing. One must strategize while punches are flying and plan for unexpected circumstances. The mental aspect of the position, Housewright said, is more important than physical talent.

“You’ve got to be able to think in chaos,” he said. “When you’re tired and guys are flying all over the place, as soon as you start to relax and lose that edge, that’s when you get in trouble. … The confidence comes from preparing for every situation that you have.”

McKay has performed at a high level because of his mentality. He feels the game has slowed down in his mind, causing him to more easily make choices the Bobcats’ offense hinges on.

Through his preparation, he understands what defenses are hoping to accomplish and how his coaches are aiming to exploit it. For every play, he wants a plan in place.

“That’s why he gets paid the big bucks,” MSU wide receiver Willie Patterson said jokingly. “I just have to go run and catch for him and block and that’s why he’s back there throwing dimes, taking the big hits. He’s mentally prepared to allow himself to read defenses and be able to make decisions on the fly and make the right decisions.”

McKay is second in the Big Sky with 174.7 passing efficiency, only behind Eastern Washington’s Eric Barriere. McKay has completed 64 of 96 passes for 905 yards and nine touchdowns with only the single interception.

Patterson lauded McKay for making correct choices on a variety of plays, including run-pass options. He also pointed out Housewright picks plays with good timing.

“His playmaking ability and reading defenses has been really key to why our offense is doing what it’s doing,” Patterson said of McKay. “He’s so invested into our playbook and just into the knowledge of football I feel like his football IQ is what separates him from different quarterbacks.”

Housewright wants McKay to make his decisions rapidly. This means he also doesn’t want the quarterback, who transferred from North Carolina State after the 2019 season, to think too much.

That’s why Housewright has established rules with McKay. When a play unfolds a certain way, he wants McKay to follow those rules and rely on his training.

“Just continue to try to be perfect from a decision standpoint,” Housewright said. “He doesn’t have time to relax or think he’s really good because he’s not yet. But he’s playing some good ball for us right now.”

Before McKay threw his first pick, Housewright said the “law of averages are against you at some point” when referring to McKay’s turnover-less stat line.

Limiting them is of the utmost importance. While Housewright said MSU’s two turnovers on the entire season is a product of players around McKay, including a stellar running game, the coach also credited him for not forcing throws. Housewright said McKay’s accuracy has been “OK,” but that’s in part because his expectations for the QBs are “really, really high.”

“He’s not going up to the line of scrimmage and saying, ‘I’m throwing this ball no matter what.’ He’s looking at the defense, throwing and finding green grass and throwing it away from the defenders,” Housewright said. “You have five eligible (receivers), somebody is open at some point on every play. It’s your job at quarterback to find out when that moment is and if you’re going to be ready to make a throw.”

Vigen said McKay has “been solid.” Having played only 11 games at NC State, Vigen said McKay’s experience the last four games has been vital. At last, he can apply what he’s learned in the film room and during practice.

Vigen said McKay will learn more by actually playing. But early on, McKay’s diligent prep has paid off. He’s completed 67% of his passes, and Vigen said he’s expected to be over 60%.

“He’s been able to make plays on third down,” Vigen said, “and while there’s been plenty of opportunities within each game I think that he can learn from, he’s taking those learning experiences and proving if our quarterback can make some plays and he can protect the football and he can make plays on third down in particular, that gives us a very good chance to win.”

McKay doesn’t just go to his own position group meetings. He attends others as well. This impressed his peers, including MSU left tackle Lewis Kidd.

McKay gained this habit early in his college career. This allows him to understand what the coaches are teaching so he may reinforce it with his teammates.

It all has helped him remain in lockstep with the rest of the team. This is the type of preparation that has minimized mistakes.

“Just being around those guys, having fun and showing them that I care about what they’re learning,” McKay said, “and if I see anything, just teaching them stuff too, so I think just being around them and us all being on the same page is just going to help us.”

Kidd said it feels like McKay lives in the film room, and “it shows.” Kidd, who used to be roommates with McKay, said McKay’s confidence has grown. This has been especially evident since he’s taken over as the starting quarterback.

“He was instantly kind of a leader,” Kidd said. “He leads by example and just kind of takes control. When he’s in the huddle, we all respond and I think him coming in, just trusting him, gives him confidence.”

Patterson said McKay gathers MSU’s offensive players before every practice to remind them of the importance of the work they’re about to do. He wants to ensure they’re all on the same page and focused.

“He’s locked in,” Patterson said. “We feed off his energy, and through that I feel like our play, it elevates itself.”

McKay’s contagious practice habits combined with his skills have set him up to become a signal caller the Bobcats can rely on.

“I’m getting better,” McKay said, “but I still have a lot of room to improve.”

OGDEN, Utah — A Sunday, a part of the weekend Montana State would normally take to relax, marked the team’s first practice to ready for their next opponent.

Scanning the field, dissecting the defense in front of him, Matthew McKay discerned another approach was needed.

Montana State offensive coordinator Taylor Housewright talks to the media about the Bobcats' performance at Portland State, their upcoming gam…

As Matthew McKay held the ball out to hand it off, a San Diego defender froze. This was all McKay needed to make his decision.

Between time spent in coaches offices, at classes and on the practice field, Brent Vigen wonders if Matthew McKay has even a spare minute left in a day.

Montana State quarterback Matthew McKay looks for a pass against Drake on Sept. 11 at Bobcat Stadium.

TOP: Montana State quarterback Matthew McKay runs against Drake on Sept. 11 at Bobcat Stadium. ABOVE: McKay breaks free on a run against San Diego on Sept. 18.