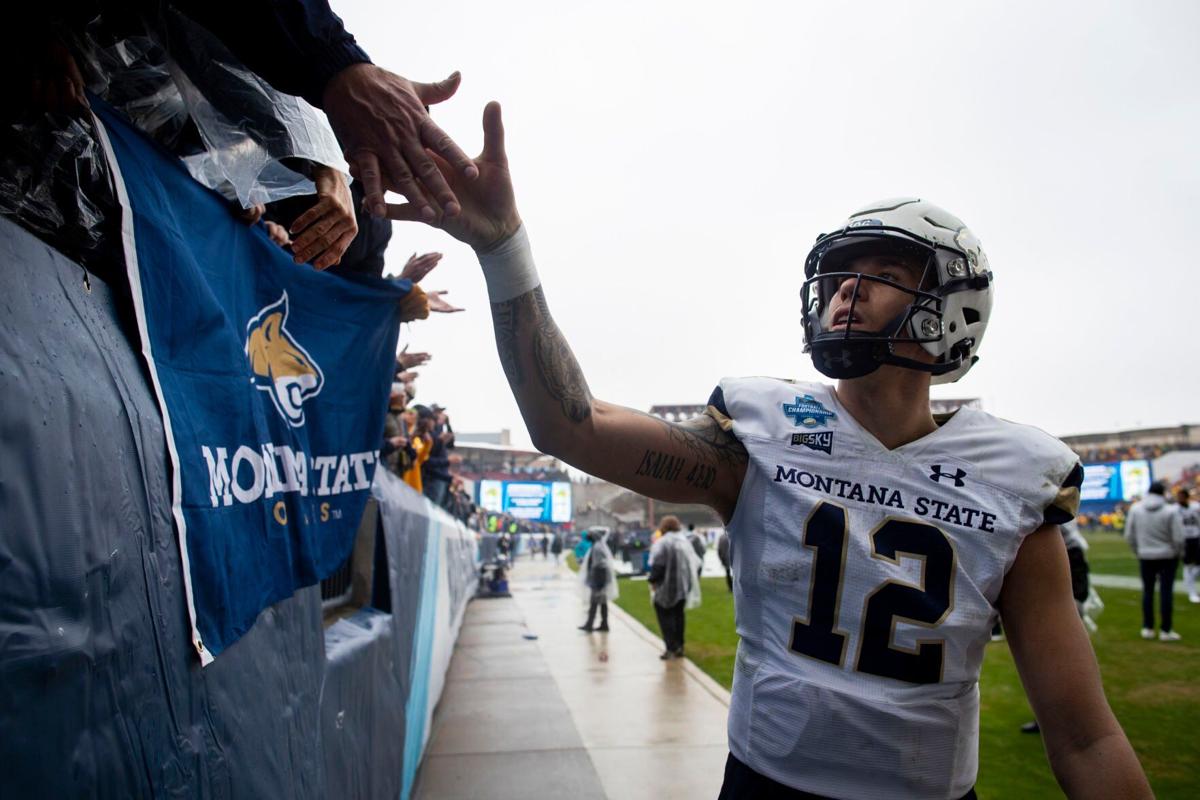 Montana State's Tucker Rovig gets high-fives from fans after the Bobcats’ 38-10 loss to North Dakota State in the FCS title game at Toyota Stadium in Frisco, Texas, on Saturday. 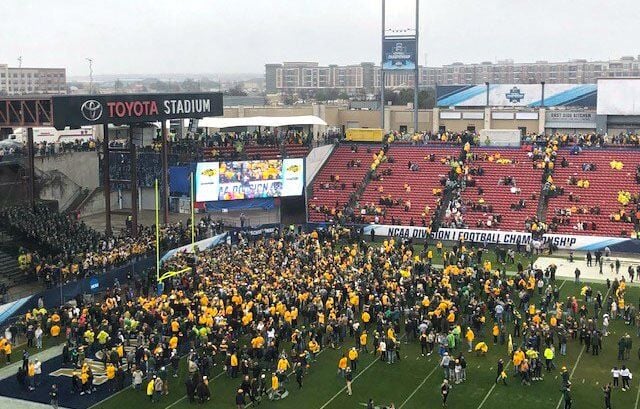 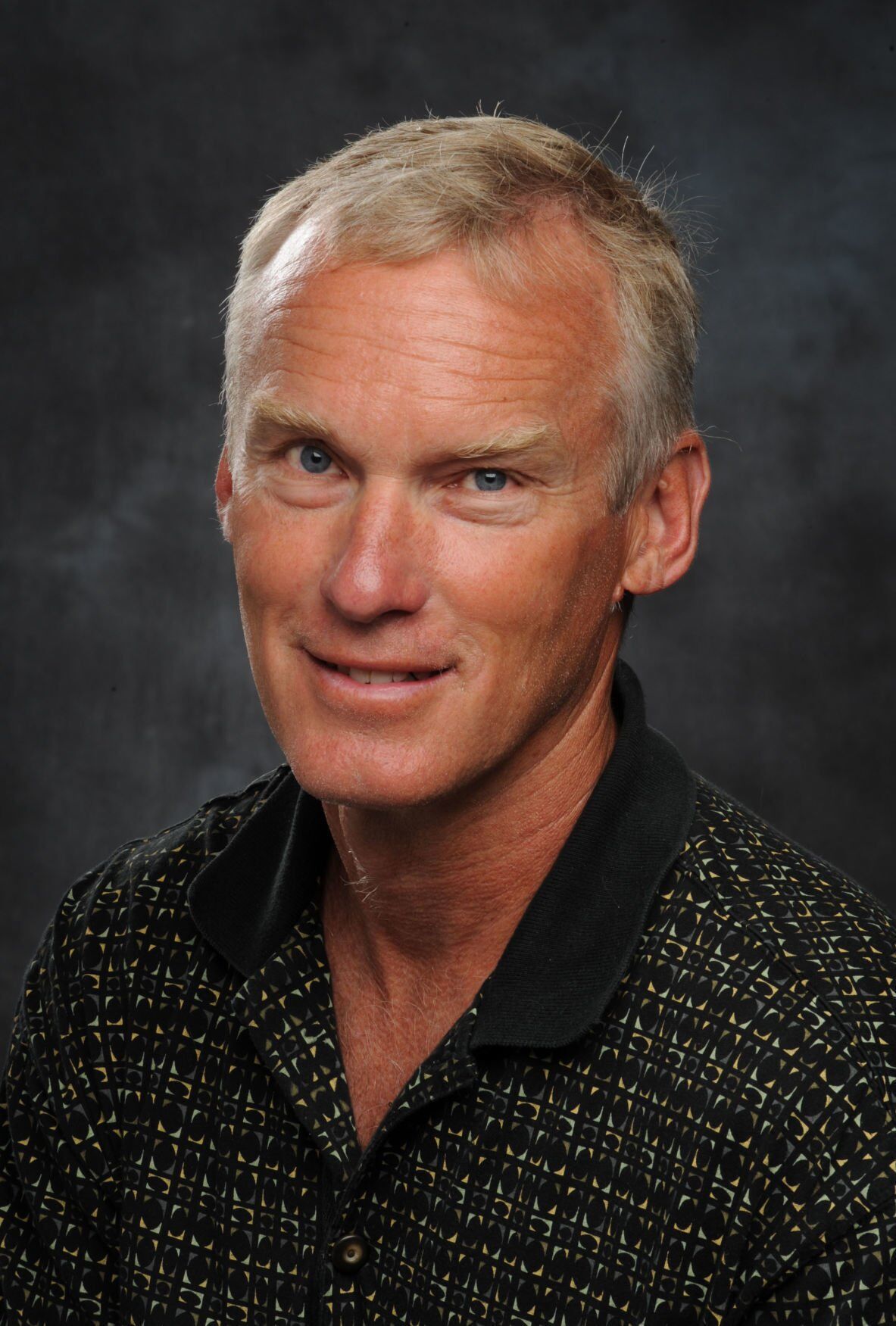 If you’re Montana State, and you’re looking for an angle for reconciling a 38-10 trouncing at the hands of the North Dakota State juggernaut on a gloomy Saturday, you might point to losing freshman quarterback Tommy Mellott to an ankle injury during a promising first series on Toyota Stadium's moist natural grass.

And you’d know you’re kidding yourself.

What Montana State’s first appearance in the FCS Championship game in 37 years taught us is how wide the gap remains between the still-rising Bobcats and, ominously, the still-rising Bison, especially when they’re committed to taking care of business on a stage that has become their de facto second winter home.

“It was going to be hard to beat the Bison today,” understated NDSU coach Matt Entz, who won his second crown and improved to 37-4 with a 14-1 third season.

Conceded first-year MSU coach Brent Vigen, like Entz a former assistant in Fargo: "They were the better team for sure today."

Entering the Bobcats' fourth title game, many of us had the illusion of aligned stars for MSU.

Clearly, though, we were fooled by the teams’ seemingly similar statistics. We took too much stock in the comparison shopping with South Dakota State, a team that handed NDSU its only defeat (27-19) six weeks before the Cats whipped the Jackrabbits by two touchdowns in the semifinals.

We looked at a Bison roster devoid of a Carson Wentz, Easton Stick or Trey Lance at quarterback, and thought the one-touchdown betting spread too generous given MSU’s late-season surge under Mellott and NDSU’s perceived vulnerability despite owning eight of the last 10 titles. They were, after all, suffering through a one-year drought.

A 7½-point ‘dog? Whatever. Wasn’t the same true for MSU at defending champion Sam Houston, a 42-19 romp?

And wouldn’t the Cats be hungrier, given the long wait compared to NDSU locking this venue into their annual itineraries? Perhaps this was the first ominous sign Saturday: This event might be routine for the Bison faithful, but green and yellow still had a 60-40 edge over blue and gold in the grandstands. It still matters to NDSU.

So, swwiiiinnng and a miss.

Vigen, who knows of what he speaks about NDSU more than anyone at MSU given his title-tinged tenure in Fargo, had described its program as a “machine” a day earlier in a pep talk to former Bobcat players. The Bison, Vigen added, were the model to which the Cats aspire.

A similar message to his team was unnecessary. The Bison have ended the Cats' last three seasons handily, albeit each one farther down the pike: 38-10 Saturday, 42-14 in the 2019 semifinal and 52-10 in the 2018 second round.

"I don't think they need to be reminded of that," Vigen said.

His talk Friday was painfully prophetic. NDSU was an unstoppable machine Saturday.

Sure, a healthy Mellott might’ve given the offense enough spark to make it interesting longer. But any credible assessment must veer to the trenches, especially NDSU’s offensive line, which gashed one of the nation’s best defenses for 268 rushing yards en route to a 28-0 halftime lead.

A few plays into the third quarter, it was 35-nil.

NDSU’s starting O-line, which includes three small-town North Dakotans, was a wide-body wall of power. Bison fullback Hunter Luepke was the game’s Most Outstanding Player for scoring three first-half TDs, but he should use any NIL money to buy dinner for his big guys up front.

"I think we’re probably one of the few teams in the country that celebrates the offensive line," Entz said. "They’re cult figures in North Dakota. We have to lead the nation in physicality."

Mellott’s replacement, Tucker Rovig, was serviceable in his stead. But on a day where MSU needed absolutely everything to go right — and even that probably wouldn’t have been enough — the final-year player from Meridian, Idaho, didn't have the near-perfection required until hitting record-setting senior receiver Lance McCutcheon late in the fourth quarter for MSU's only TD.

So what now for MSU, which loses one of its greatest players ever in Troy Andersen and a bevy of seniors, including McCutcheon, who brought the program to the precipice of a national title with a 12-3 record and infused enormous pride among alums?

When it was over, a handful of weary Bobcats remained on the field, exchanging hugs before slowly trudging to the locker room while NDSU’s players raced to the bleachers, where the band played. In a postgame Zoom interview, junior defensive back Ty Okada rattled off the name of every outgoing player, noting their initiating MSU's incremental rise five and six years ago.

And as if they needed offseason motivation, the Bobcats again saw the chasm between them and the bar by which all FCS teams are measured.

"I truly believe we continue to close it, but they (the Bison) are not slowing down either," Vigen said. "That’s going to continue to be the message. We have to keep getting better every day. That’s in the weight room, that’s as a program in general. We’ve got to keep pushing the envelope; that’s what North Dakota State has continued to do, is push the envelope. Credit to them."

Make no mistake: The 2021 Bobcats were a great team.

Make no mistake: The Bison are a great program.

The difference was again on full display in Frisco, when MSU’s magical season landed with an anticlimactic soggy thud.

Email 406mtsports.com and Lee Montana newspapers Executive Sports Editor Jeff Welsch at jeff.welsch@406mtsports.com or follow him on Twitter at @406sportswelsch

Martello compared Portland to antifa and the South Side of Chicago.

Mellott had ankle surgery earlier this week in Bozeman.

The Bobcats earned their seventh straight win over their rival.

Montana State's five-game road winning streak is its longest since joining the Big Sky Conference, and the Bobcats have now won 10 of 11 games.

Beasley is a guard from Australia.

Five Bobcats scored in double figures in the home win.

Montana State's Tucker Rovig gets high-fives from fans after the Bobcats’ 38-10 loss to North Dakota State in the FCS title game at Toyota Stadium in Frisco, Texas, on Saturday. 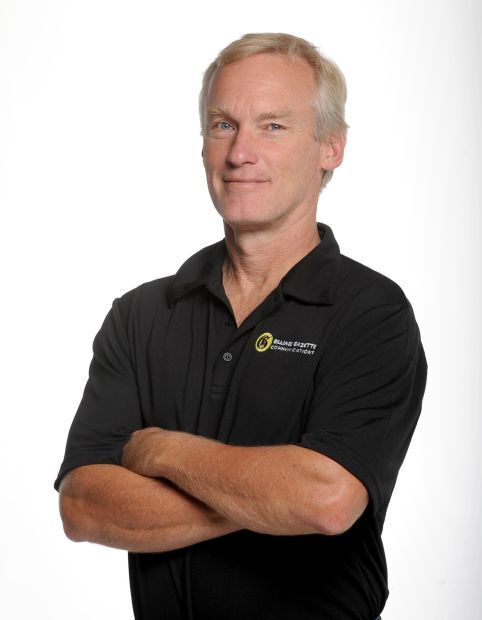