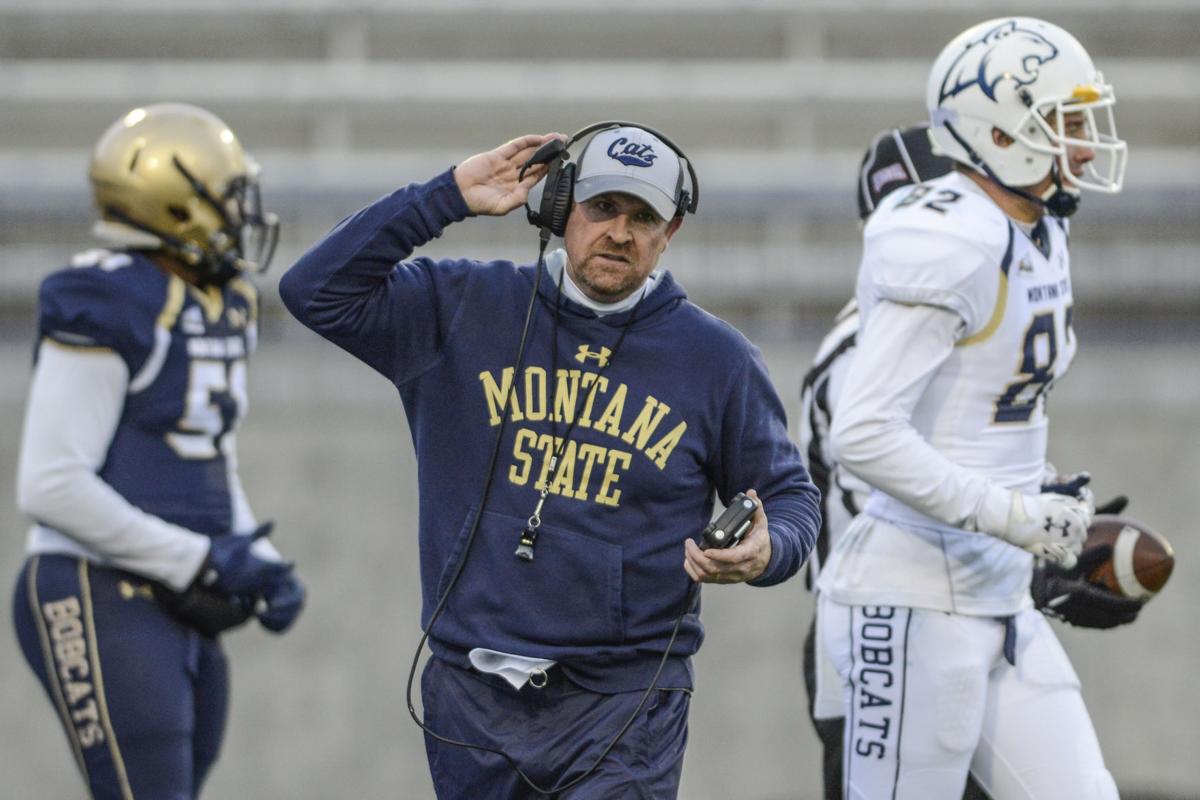 Jeff Choate served as the head coach at Montana State from 2016 until last week, when he was lured away to become a top assistant at Texas. 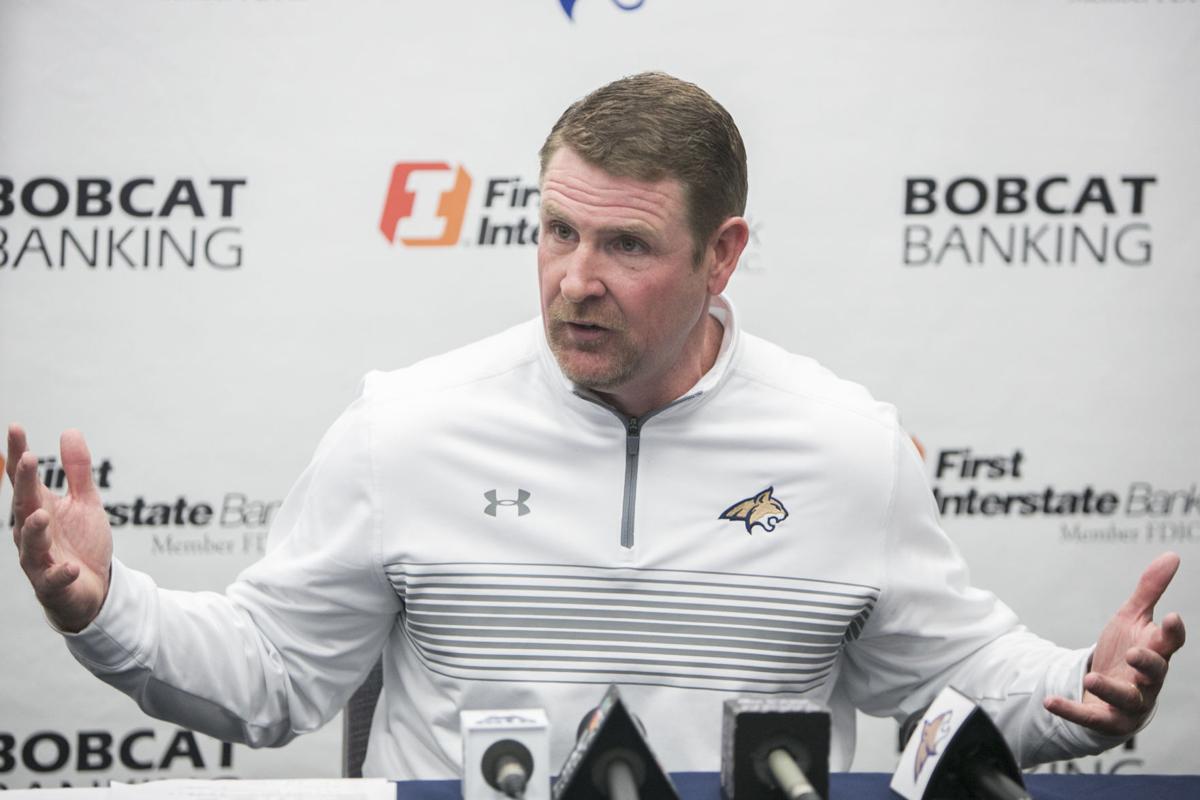 Jeff Choate speaks to the media on Feb. 3, 2016 at Montana State's Brick Breeden Fieldhouse in Bozeman.

Choate is now leaving MSU to become an assistant coach at Texas. As his Bobcats tenure comes to a close, here is a list of his most memorable moments, in chronological order, since being hired in December 2015.

While seemingly unremarkable for a team that didn’t make the postseason, it was a win that helped set the stage for what was to come.

“That was a big win for our program,” Choate said in an online press conference Saturday. “I think that was maybe one that is sometimes overlooked. Davis wasn’t a powerhouse that year, but that was an important win. I think that gave our guys the confidence to go into Missoula the next week and pull out a win.”

Entering Choate’s first matchup against Montana, the Bobcats were just 3-7 and were 1-6 against Big Sky opponents. They lost their first six conference games of the year.

Despite only completing two passes all game, MSU wore down the Grizzlies in Missoula. The Bobcats combined to rush for 368 yards in the 24-17 win. Quarterback Chris Murray rushed for 142 yards and two touchdowns, including the memorable highlight of him flipping into the end zone.

While the future was unknown at the time, the victory catapulted MSU into the offseason as buzz around the program picked up. The season was mostly spent implementing Choate’s desired style, and it was on full display in the final game.

Though neither team went on to make the playoffs, the Bobcats’ Nov. 18, 2017 win contributed to Choate’s unblemished record in the rivalry.

MSU opened up a nine-point lead midway through the third quarter, and a Murray touchdown run in the fourth helped seal the 31-23 win.

Though the Grizzlies had a chance late in the game, cornerback Tyrel Thomas broke up a pass on fourth down in the final seconds. With Choate’s second victory against UM, his legend began to grow among the Bobcat faithful.

Before Murray’s junior year, Choate announced the quarterback would miss the season due to academic issues. Murray took over as Montana State’s starter midway through his freshman season and started as a sophomore.

Murray never played another game for the Bobcats and eventually left the program. With the void behind center, Choate moved linebacker and running back Troy Andersen to quarterback. The domino effect illustrated one of the biggest flaws throughout Choate’s time at MSU.

The Bobcats have frequently faced questions at quarterback, especially in 2018.

But Andersen did enough to win. He was unanimously named a first-team all-conference selection largely because of the way he stepped up when called upon.

Andersen set MSU’s single-season record with 21 rushing touchdowns. Though he didn’t say it publicly until the following year, the Dillon native preferred to play defense.

By sacrificing his personal preference, Andersen helped save the season and alter how fans perceived Choate.

Ultimately, they came out on top with the 26-23 win in the 2018 season opener and their annual Gold Rush game. Andersen dealt with a mid-game hand injury but still completed 12 of 21 passes for 81 yards and rushed for 145 yards and two touchdowns on 24 carries.

Tristan Bailey hit field goals from 50 yards and 35 yards to help MSU leapfrog the Leathernecks in the fourth quarter.

While it wasn’t as memorable as the wins against Montana, it was a crucial game that helped push the Bobcats into the playoffs later in the season.

As MSU’s offense sputtered in the fall of 2018, Choate shook up his offensive staff midseason.

During an Oct. 20, 2018, game at Weber State, the Bobcats blew a 17-7 lead and were outscored 27-7 to close the lackluster loss. They totaled just 77 yards in the second half. Two days later, Choate announced the changes.

“(The offense) needs to be better than it is, and I really believe Matt’s a guy that can bring new energy and a new perspective to that group,” Choate said. “And I’m excited to see what he can do for us moving forward.”

MSU lost the following week at Idaho State but then ripped off four straight wins, a run that included beating rival Montana in epic fashion. This helped the Bobcats sneak into the playoffs and advance to the second round.

In what will forever be known as the Miracle in Missoula, the Bobcats rallied from a 22-point deficit to beat the Grizzlies for the third straight year. MSU made a goal-line stand in the final seconds to preserve the 29-25 win on Nov. 17, 2018.

With Andersen at quarterback, the Bobcats soured UM head coach Bobby Hauck’s return to the rivalry. The Grizzlies appeared to score in the final seconds, but Choate called timeout just before the play. On the final goal-line stand, Bozeman native Grant Collins and Colstrip native Tucker Yates popped the ball out from Griz running back Adam Eastwood. Belgrade’s Derek Marks made the fumble recovery.

It was the first time MSU beat the Grizzlies three straight times since 1983-85.

The win propelled the Bobcats into the FCS playoffs for the first time under Choate and altered the trajectory of the program. They lost in the second round to North Dakota State, but just getting into the playoffs accelerated the program’s progress.

To close the 2019 regular season, Montana State stomped Montana 48-14. The win cemented the legacies of Bobcats seniors who experienced a coaching change and persevered through the building of Choate’s vision.

MSU forced a fumble on the first play from scrimmage and never looked back. The Bobcats scored 24 unanswered points to open the game, and fans celebrated in the stands throughout the second half.

With four consecutive wins against UM, Choate added to his “Griz slayer” status among fans.

“I don’t know what’s better, beating them four years in a row,” Marks said after the game, “or knowing there’s seniors on that team who have never beaten Montana State.”

Touchdowns by Isaiah Ifanse, Kevin Kassis and Jason Scrempos helped the Bobcats open up a 24-3 lead. They cruised in the fourth quarter.

MSU went on to lose 52-10 at North Dakota State a week later in the semis, but reaching that point for the first time since 1984 sent a signal to the rest of the country that the Bobcats could be among the top programs in the FCS.

Because of the coronavirus pandemic, MSU hasn’t played a game since that Dec. 21, 2019 loss.

Only two weeks before Choate earned his job at Texas, he was passed over for Boise State’s head coaching job. The Broncos hired Oregon defensive coordinator Andy Avalos instead.

After missing out on coaching an FBS school he previously was an assistant at, Choate said he was thankful to be Montana State’s head coach. He repeatedly referred to “unfinished business” he had in Bozeman.

Choate’s success at MSU has meant he’s garnered interest from schools that can pay him more money. When Boise State picked Avalos, fans breathed a sigh of relief.

Just a couple weeks later Choate was on his to Texas as its co-defensive coordinator and linebackers coach.

Are the Green Bay Packers pretenders?

Could Arkansas keep their impressive start going against Texas A&M (-4.5)?

Could Arkansas keep their impressive start going against Texas A&M (-4.5)?

The White Sox are AL Central Champs, but can they make a run?

The White Sox are AL Central Champs, but can they make a run?

Lubick interviewed with MSU on Saturday but has decided to stay in Lincoln.

Jeff Choate served as the head coach at Montana State from 2016 until last week, when he was lured away to become a top assistant at Texas.

Jeff Choate speaks to the media on Feb. 3, 2016 at Montana State's Brick Breeden Fieldhouse in Bozeman.