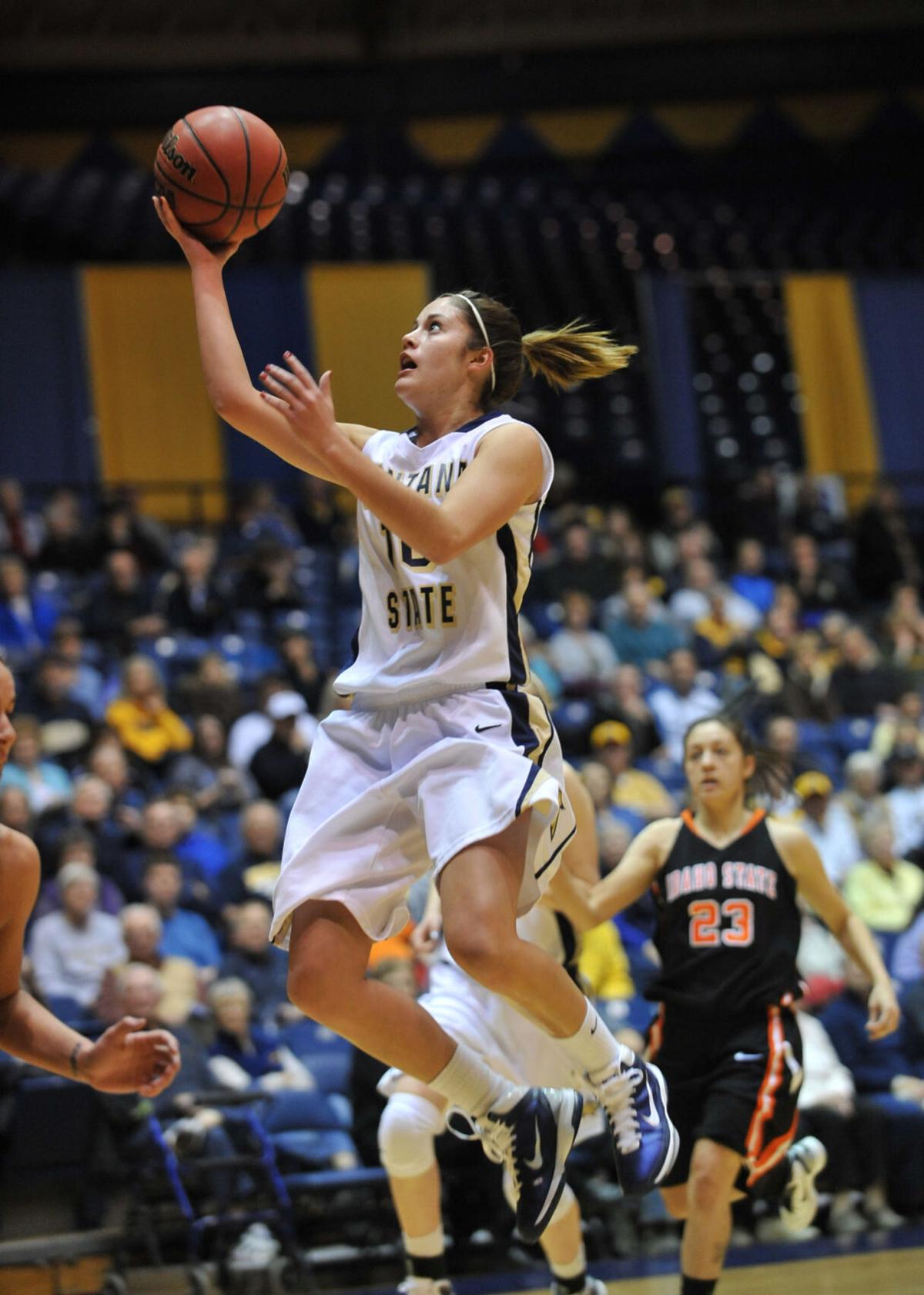 Katie Bussey played at Montana State from 2008-12 and ended her career as the program's second all-time leading scorer. 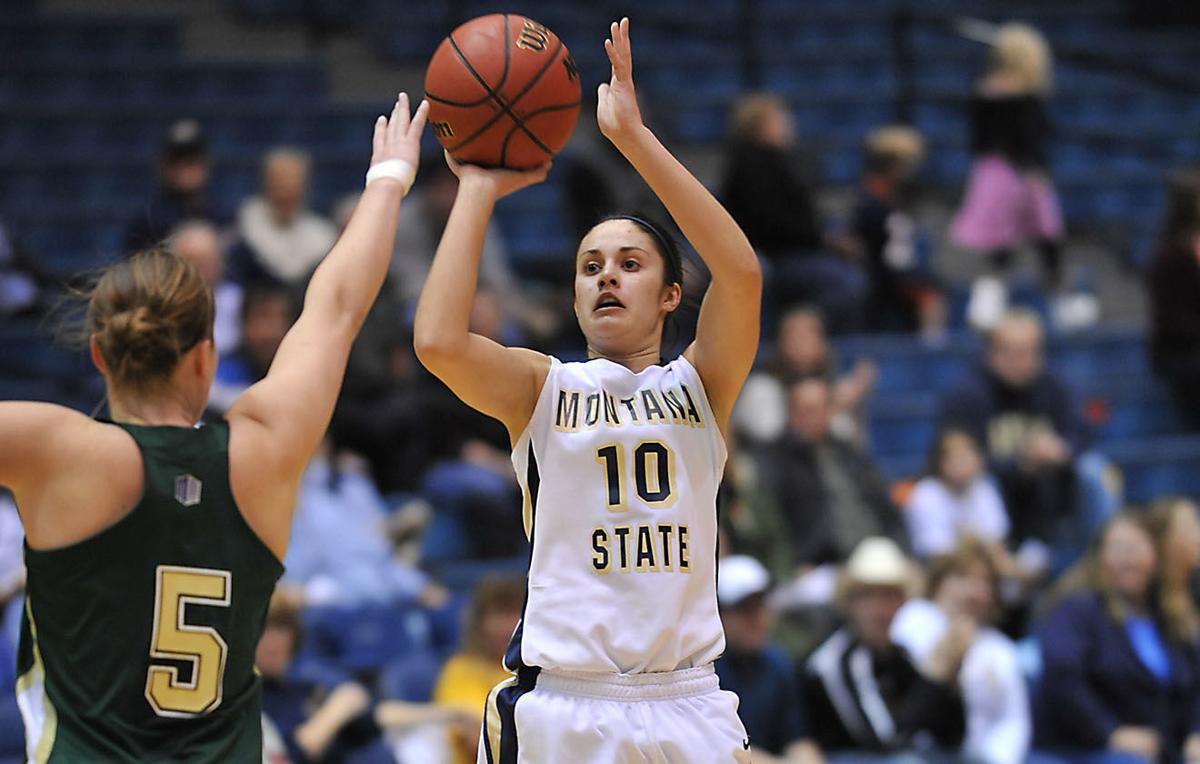 Katie Bussey, who starred at Montana State from 2008-12, is rejoining the program as an assistant coach on Tricia Binford's staff.

BOZEMAN — Montana State coach Tricia Binford didn’t have to look far to fill her assistant coaching position, but she did need to reach across the pond to coax one of the best players in Bobcat women’s basketball history to join her staff.

Katie Bussey, who played at MSU from 2008-2012 and was a WBCA honorable mention All-American her senior season, will join Binford’s staff in mid-June. With the Bobcats, the Alamosa, Colorado, product will serve as director of on-court player development, serve as assistant offensive coordinator, oversee international recruiting and direct the Bobcat Hoop Camps.

“We’re ecstatic to have Katie back in Bozeman,” Binford said in an MSU press release. “She will bring tremendous energy, passion, and competitiveness to our program. Katie will be a great mentor to our student-athletes in all facets of the game.

“Since leaving Montana State, Katie has continued her commitment to the game as a professional athlete, coach and trainer of high school and college-aged athletes. As a player at MSU, her drive, determination and leadership skills were second to none. Anyone who has spent 10-seconds with Katie instantly recognizes her enthusiasm and love for the game. It’s truly special. She also brings a strong commitment and desire to grow the game and make our program better.”

After graduating from MSU with a degree in kinesiology in 2012, Bussey played professionally in The Netherlands, Sweden and Germany. She currently serves as a player/coach at Triple Threat Basketball Academy in Haarlem, Netherlands.

The bulk of Bussey’s professional playing career spanned six seasons, beginning with ProBuild Lions in Landsmeer, Netherlands, in September 2012. Bussey helped the squad to the Dutch National Championship and a Dutch Cup title, competing in the highest league in the country.

From 2013-2017, she played for Lulea Basket of Lulea, Sweden, where she guided the club to four consecutive Swedish National Championships in the SBBF, Sweden’s top league. In addition, Lulea Basket competed in the FIBA EuroCup in 2015 and 2016, advancing to the second round in 2015.

With Herne Turn Club in Herne, Germany, in 2017-18, Bussey led the team to a third-place finish in the DBBL, Germany’s highest league.

Off the court, she has worked as a strength and conditioning coach for the Dutch National Basketball Federation and as a personal trainer at PhysioLab in Amsterdam.

“I couldn’t be happier to chase my dream of becoming a coach in a place that gave me so much,” Bussey said in MSU’s release. “I look forward to giving back to MSU and the women’s basketball program, returning to Bozeman and getting the chance to lead and mentor young women who have the same dreams that I had.

“Over the years, Coach Binford and her coaching staffs have built a culture of winning, and I am excited to share the experiences I’ve had as a player in continuing this winning tradition. I am excited to meet the coaches and players and am ready to get to work.”

At Montana State, Bussey is second on the all-time career scoring list with 1,710 points, just 51 behind all-time leader Kathleen McLaughlin Howard. She stills hold the school record for most points in a game with 41 against Idaho State on Feb. 2, 2012. Bussey is MSU’s all-time 3-point makes leader with 254 triples. At the time she left Montana State, her three-point total was best in Big Sky Conference history.

In all, Bussey’s name appears in the top 10 of nine career categories and seven single-season records.

Bussey completed her senior season averaging 17.3 points, 3.5 rebounds and 3.3 assists per game, en route to earning All-America honorable mention kudos, the first Bobcat to earn the honor since Blythe Hommes in 1997. Bussey was the 2009 Big Sky Conference freshman of the year, and she garnered unanimous first-team accolades in 2012, second-team honors in 2011 and honorable mention recognition in 2010.

Off the court, she was MSU’s Big Sky Conference scholar athlete of the year in 2012 and was a four-time All-Big Sky Academic selection.

Countries that have never won an Olympic medal

The Bobcats will begin their Big Sky schedule on the road.

Booker led Kentucky with 18 points in a win over the Bobcats in 2014.

The Shampeny name has a lengthy legacy at Montana State.

MSU's Big Sky regular season schedule will begin on Dec. 2 and end on March 4 against the same opponent.

Burke Mastel anticipated landing at the NAIA level once he concluded his high school career.

Sunday will mark six years since Eryon Barnett died in the Bozeman hospital.

Parker, who is enshrined in five Halls of Fame for his work as AD at Carroll and then Rocky, died Friday morning after a long fight with diabetes and complications following a kidney transplant. He was 64.

Katie Bussey played at Montana State from 2008-12 and ended her career as the program's second all-time leading scorer.

Katie Bussey, who starred at Montana State from 2008-12, is rejoining the program as an assistant coach on Tricia Binford's staff.