BOZEMAN — The Big Sky is sending five teams to the Football Subdivision Playoffs for the first time.

“We play in a tough conference, and for our conference to get five teams for the first time ever, I believe, speaks to the quality of our league,” MSU coach Brent Vigen said Sunday.

The seeds diverged somewhat from the latest Stats Perform FCS Top 25, released Monday. Big Sky champion Sac State is the conference’s top seed but the fourth-highest team in the rankings at No. 8. EWU is ranked No. 4, UM is No. 5, MSU is No. 7 and Davis is No. 14.

“The league’s good,” UM coach Bobby Hauck told ESPNU during Sunday’s FCS selection show. “We have good offense, good defense. Depending on the team, maybe both on some of these squads. ... I think it’s a strong conference and probably deserved five spots.”

Those five teams account for 20.8% of the playoff field, so the Big Sky has a solid chance to boast a national champion for the first time since EWU in 2010.

Here’s what the championship path looks like for each team:

Sac State might have an easy scouting assignment for its first playoff game.

The Hornets received a first-round bye and will play a home game in the second round at 7 p.m. Mountain time Saturday, Dec. 4. They will face the winner of the first-round game between UC Davis and No. 11-ranked South Dakota State (8-3). Sac State beat Davis 27-7 on Saturday to clinch the Big Sky title.

A win over Davis/SDSU would give Sac State a quarterfinal home game on Dec. 10 or 11 against No. 6-ranked and fifth-seeded Villanova (9-2), No. 24 Holy Cross (9-2) or unranked Sacred Heart (8-3). Holy Cross will host Sacred Heart on Saturday, and the winner will play at Villanova.

If the Hornets win their quarterfinal game, they’ll either travel to top-ranked and top-seeded Sam Houston (10-0) or host one of the other five teams, including Montana State, in that quadrant of the bracket on Dec. 17 or 18. So Sac State might play at home until the FCS title game in Frisco, Texas, on Jan. 8 if Sam Houston, the defending FCS champion, loses in the second round or the quarters.

The Griz are on the opposite side of the bracket from all of the Big Sky teams except Eastern Washington, a familiar foe that UM could face in its first playoff game.

A semifinal matchup for UM would probably be against No. 3-ranked and second-seeded North Dakota State, which has won eight of the last 10 FCS championships. If NDSU gets upset, the other possible semifinal foes for the Griz would be No. 9-ranked and seventh-seeded East Tennessee State (10-1), No. 10 Kennesaw State (10-1), No. 17 South Dakota (7-4), No. 21 Southern Illinois (7-4) or Davidson (8-2).

Despite the lower seed, MSU got a better draw than UM, at least on paper.

Missouri State is coached by the famous Bobby Petrino, a Montana native. The Bears suffered close losses to NDSU and to Oklahoma State, a top-10 FBS team.

UT Martin’s losses were 59-21 to FBS Western Kentucky and 31-14 to unranked Southeast Missouri.

A win over Sam Houston, which has a poor strength of schedule, would vault MSU into the semis for the second straight season. Barring multiple upsets, the Cats would then play at Sac State or Villanova on Dec. 17 or 18.

A rematch with the Griz, who beat MSU 29-10 on Saturday, is only possible in the FCS title game.

It might look easy for EWU to beat a five-loss team at home, but UNI’s resume is better than its record.

The UNI game, scheduled for 2 p.m. Saturday, will probably be EWU’s only playoff game on its famous Roos Field red turf.

A rematch with Sac State will be tough for the Aggies to set up. They will travel to Brookings, South Dakota, this weekend to face South Dakota State at 1 p.m. Saturday.

Davis will travel to Sac State next week if it wins Saturday.

Both of the Big Sky schools in Idaho got rid of their head coaches after Saturday’s regular season finale, a game they coached against each other.

Both of the coaches’ contracts will be bought out, although Petrino’s contract only went through June 2022. Phenicie had one more season under contract with the Bengals.

The Butte-born Petrino, who was raised in Helena, went 33-66 in his nine seasons at Idaho, including 14-25 (10-19 in Big Sky play) since the Vandals dropped down from the Football Bowl Subdivision in 2018.

Phenicie, who was Montana's offensive coordinator from 2003-09, went 16-35 overall in his five seasons at ISU.

Stats Perform announced its finalists for the FCS’ most prestigious postseason awards on Monday, and several Big Sky players made the cut.

The 2021 Walter Payton Award, given to the FCS’ national offensive player of the year, has 25 finalists, including Eastern Washington quarterback Eric Barriere and Montana State running back Isaiah Ifanse.

MSU linebacker Troy Andersen, Montana defensive back Justin Ford and Montana linebacker Patrick O’Connell are among the 25 finalists for the Buck Buchanan Award, which honors the best defensive player in the FCS.

In 11 games so far this season, Barriere has completed 67.1% of his passes for 4,257 yards, 40 touchdowns and 6 INTs, with 224 rush yards and three TDs. The redshirt senior became the Big Sky’s career passing touchdown leader during Saturday’s game against Portland State.

Ford has 33 tackles (22 solo), two TFLs, one sack, eight INTs, eight PBUs, a forced fumble and two fumble recoveries, including one Saturday against MSU that he returned 56 yards for a touchdown.

Bennett has caught 50 passes for 616 yards and four scores.

Stats Perform also unveiled the 17 finalists for the 2021 Eddie Robinson Award, given to the FCS’ coach of the year. Montana State’s Brent Vigen and Sacramento State’s Troy Taylor made the list.

Vigen became the first head coach to lead the Cats to the playoffs in his first year at the helm.

Taylor won the Eddie Robinson Award in 2019 after leading the Hornets to their first Big Sky title in program history. It was Taylor’s first season in Sacramento. On Saturday, Sac State won its first outright Big Sky championship.

Macias made all five of his field goal attempts against MSU, including a career-best 50-yarder.

Daniels rushed for 280 yards and five touchdowns in the Lumberjacks' 45-21 win at Cal Poly on Saturday. The 280 yards are the most by an FCS player in a game this season, and Daniels broke the NAU record for longest run with a 90-yard TD in that season-ending game. 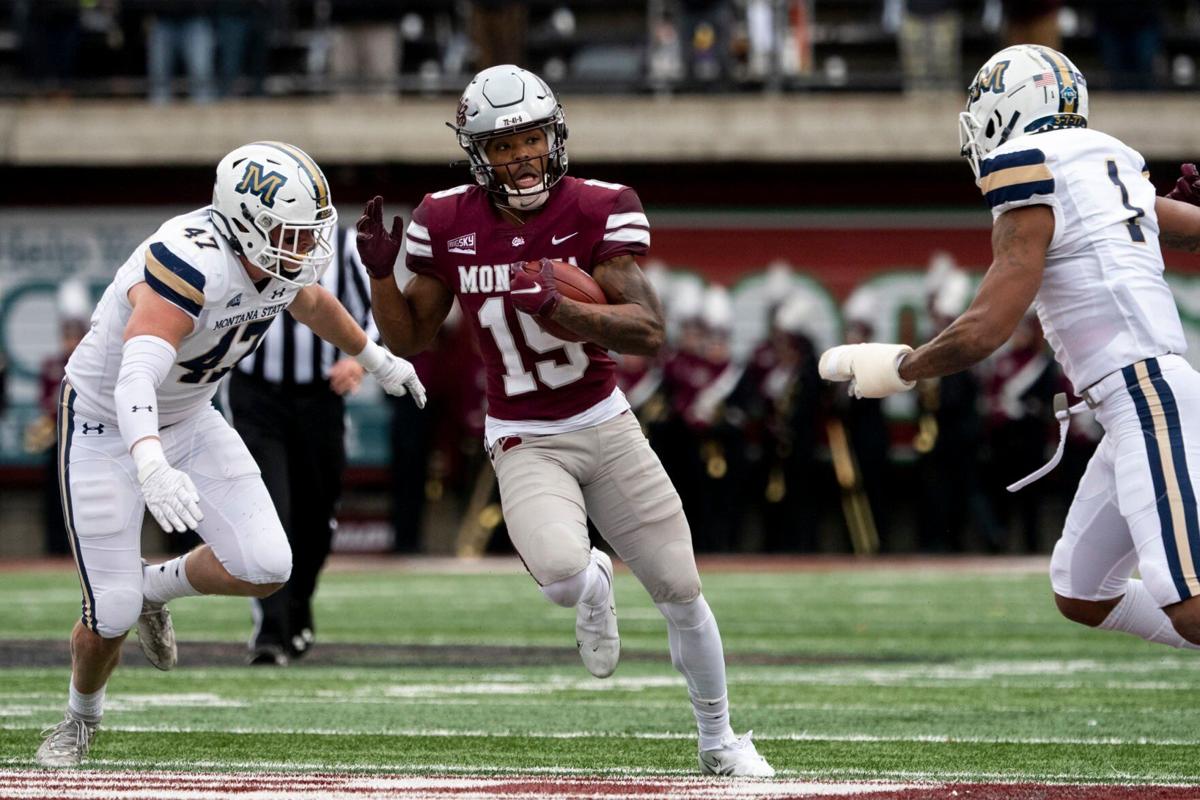 Montana's Malik Flowers (19) runs the ball against Montana State's Callahan O'Reilly (47) and Eric Zambrano (1) during the 120th Brawl of the Wild on Saturday at Washington-Grizzly Stadium. 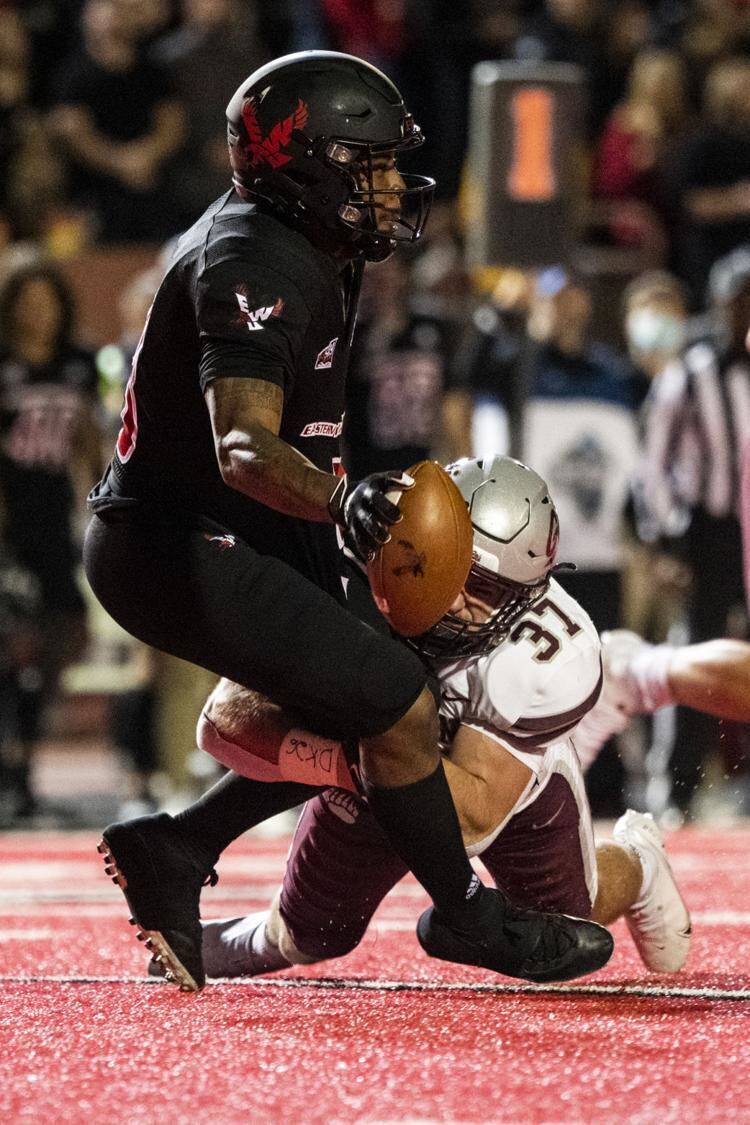 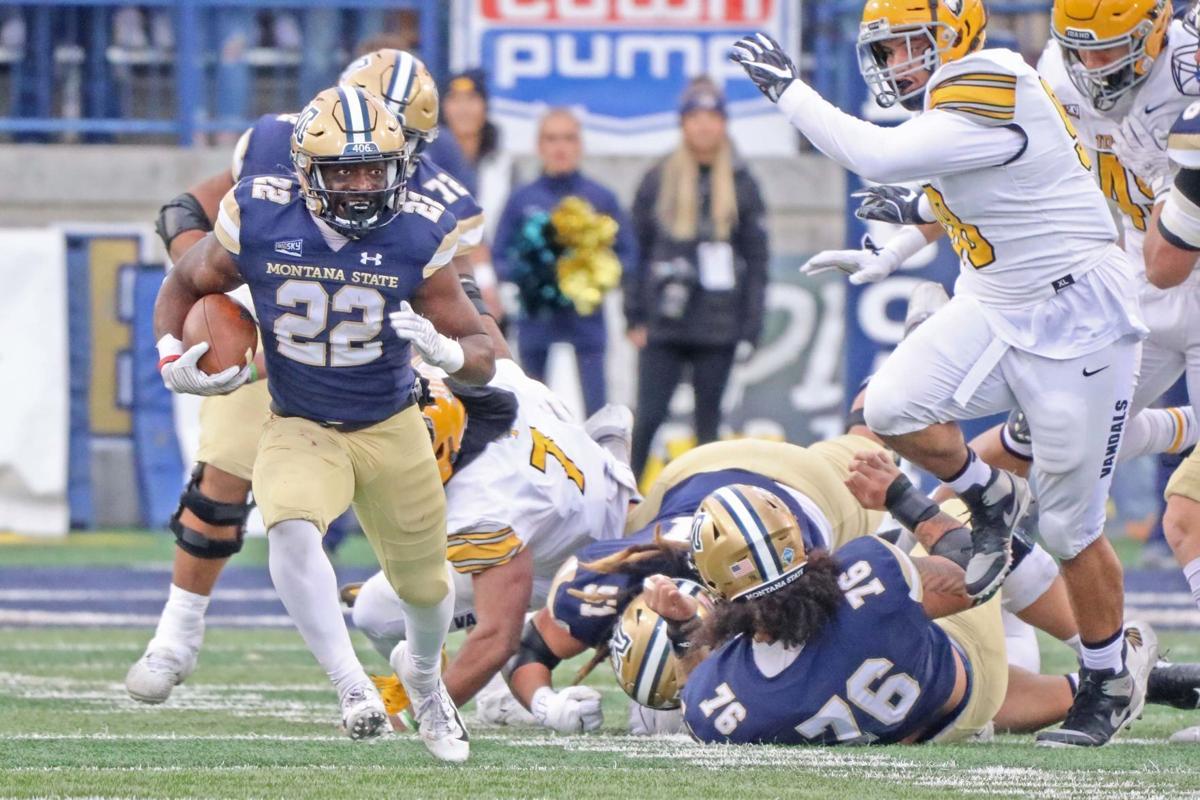 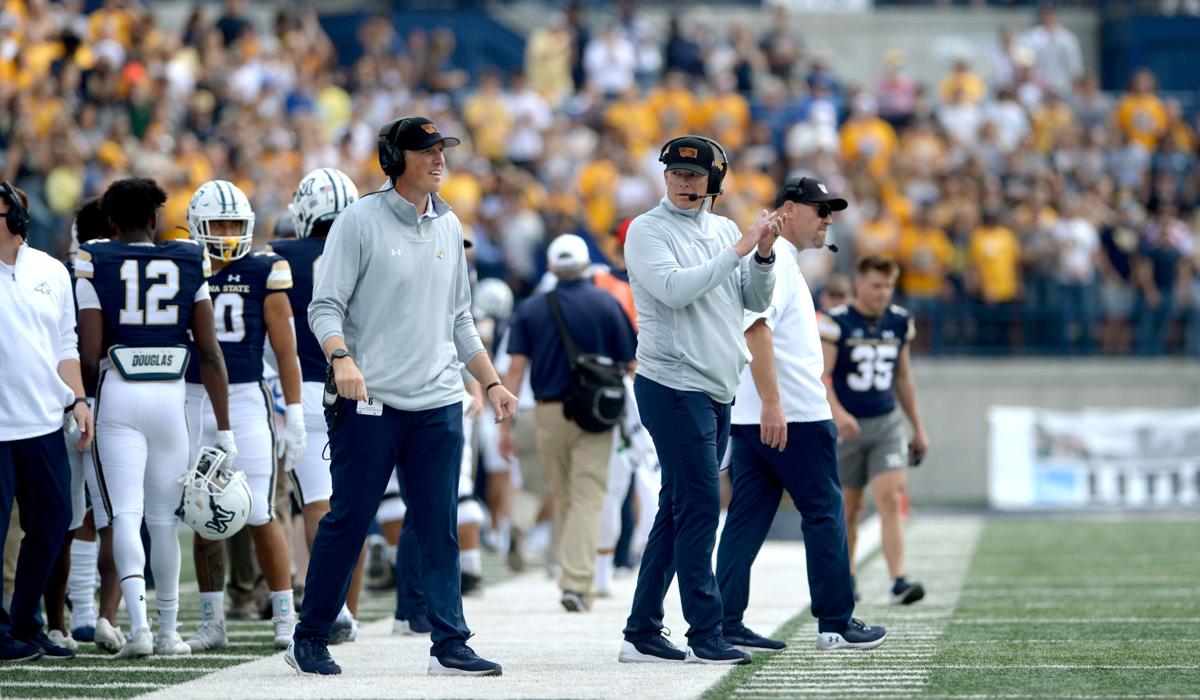