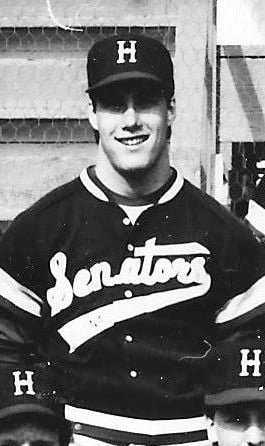 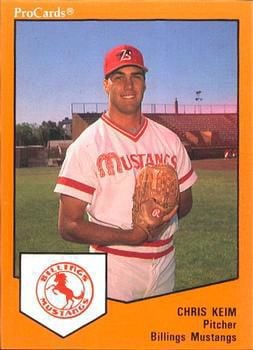 HELENA -- Chris Keim is one of only nine Helena Legion Baseball players to play in the Minor Leagues.

Keim was a three-year Helena Senators pitcher/first baseman, from 1985-87. His other sports included football (linebacker) and basketball (forward) at Helena High, where he garnered a combined five varsity letters.

His final year of Legion baseball, Keim tied the team record for regular season pitching wins, posting a 12-3 mark. He shared the mark with teammate Jeff Tuss, and Brad Luck in 1970.

Among the 6-foot-4 lefthander’s best efforts during the regular season were a six-hit shutout in a 4-0 win over the Billings Scarlets, fanning 12 and walking three; and a 15-strikeout performance in 6 2/3 innings versus Miles City, permitting four runs on four hits.

At the State Tournament, Keim twirled a seven-hitter in a 6-1 victory over the Scarlets in the second game of the tourney, with 11 strikeouts and three walks.

The following year, Tuss was drafted by the Montreal Expos.

“I was originally going to attend Montana State and play football, but decided to attend Taft after a couple MLB scouts saw me play at our State Legion Tournament and explained that I might have a future in baseball,” Keim, 50, texted from his home in Sacramento, California.

Keim was a two-time Central Valley All-Conference selection, and was drafted by the Cincinnati Reds in the 23rd round of the 1988 MLB draft after his freshman season with the Cougars.

But he returned to Taft as a sophomore, and was then recruited by such schools as Louisiana State University, Cal State Fullerton, Arizona State, Long Beach State, San Diego State, Loyola Marymount, Nebraska and Pepperdine.

“I ultimately signed my Letter of Intent to play at Fresno State University … as they had an incredible baseball program and I felt comfortable with the coaching staff and business school,” he related. “But the Reds then offered me a signing bonus I couldn’t turn down and chose to sign and begin my professional career in 1989.”

When asked how hard he threw, Keim said his fastball “was in the high 80s (mph) for the Legion, and by the time I reached the minors I was clocked at 90, and 91.”

“I chose on my own terms to move on with a career and give up my baseball days following my second year in the minors,” Keim recounted. “Trust me, it’s a tough life riding buses and playing for literally minimum wage in the minors. The dream is to just hopefully make it to the “Show,” where the ultimate payday comes.

“It was a great experience and I’m still grateful to this day being able to play the game beyond college.”

“I returned back to Fresno State as a full time student to finish my Business degree in Marketing,” recounted Keim, who serves as the associate director of Kaiser Accounts at Allergan. “I currently reside with my wife Michelle, and our two kids, Carsen, 16, and Caitlin, 14.”

He added that his son Carsen is also a decent baseball player, with college potential.

Next year, Keim will be inducted into the Helena Senators Hall of Fame, along with Tanner Swanby and the late Paul Hopkins.

“I just would like to thank all the people that supported me back home during my career, especially my parents,” Keim concluded.

Are you ready for retirement?