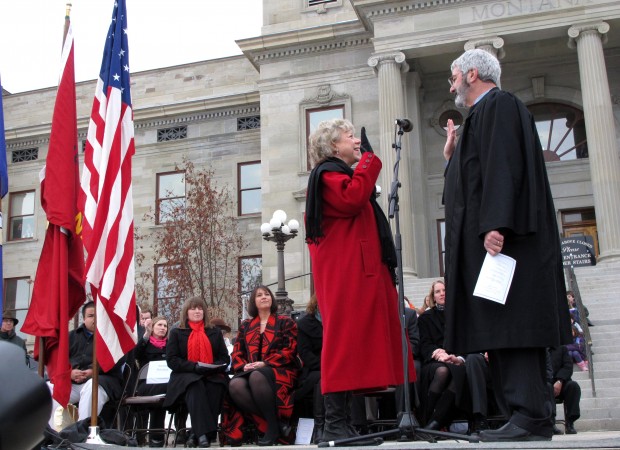 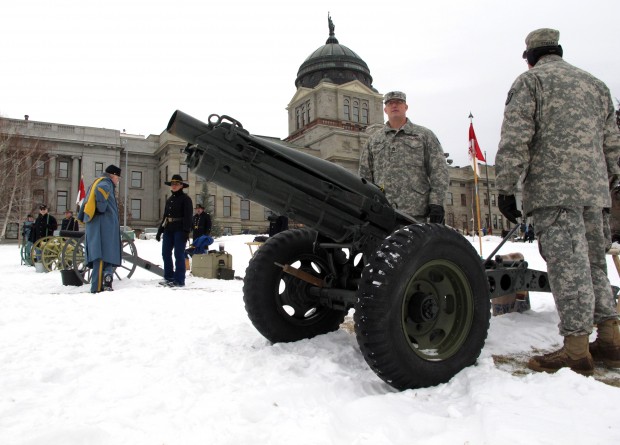 Members of the 89th Cavalry Montana National Guard and the 2nd U.S. Cavalry Association prepare to fire a 19-gun salute for the inauguration of Gov. Steve Bullock on Monday in Helena. 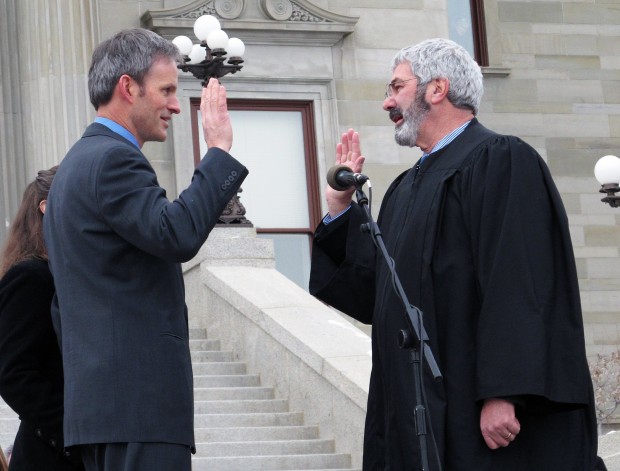 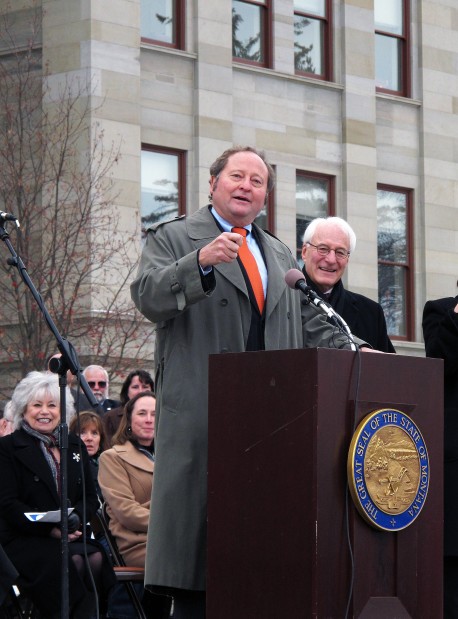 Former Montana Gov. Brian Schweitzer makes his farewell speech at the inauguration of his successor, Gov. Steve Bullock, on Monday.

With a new governor, dozens of freshman lawmakers and a state budget surplus approaching $500 million, Montana’s 63rd Legislature got off to a feel-good start Monday, as legislative leaders said they want to work together to better the state.

But each partisan side also took the opportunity to tout their own stated values, in brief speeches on the respective floors of the House and Senate.

“For every MSU professor in Bozeman, there is a businessman in the Flathead struggling to comply with all the regulations on his business,” he said. “For every child-protective specialist in Missoula who is doing very important work … there’s a hard-working truck driver in Sidney working over-time to make ends meet.”

The Montana Legislature meets for a maximum of 90 days every two years, crafting a two-year budget for the state and wrestling with a host of other policy issues.

This session, the budget arguments will be about how to allocate Montana’s healthy surplus – and both sides clearly have different ideas for use of the money.

Republicans control a 29-21 majority in the Senate and a 61-39 margin in the House. Gov. Steve Bullock is a Democrat. The House has 39 first-time lawmakers and the Senate has three.

Republicans have been saying they’d like give as much of the surplus back in tax cuts as possible. Bullock has some tax-cut and rebate proposals, but he and fellow Democrats have some spending plans as well.

House Minority Leader Chuck Hunter, D-Helena, said his party wants to build a budget that is “both responsible and responsive to the needs of Montanans.”

He listed several things that Democrats believe are important: Providing a “great education for our children,” beefing up state and local infrastructure, shoring up salaries and pensions for public workers, and “making real progress on access to affordable health care for our families and our businesses.”

A key issue before the Legislature will be whether Montana expands Medicaid, the state-federal health insurance program for low-income citizens, to cover some 60,000 additional people.

Hunter and Wittich alike said they hoped this session focuses more on policy rather than politics, and that some compromise can be found between the two parties – a typical refrain heard often on Monday in opening floor speeches by the leaders.

Wittich also suggested that the 2013 Legislature might be able to finish its work a couple of weeks before the 90-day deadline in late April.

Senate Minority Leader Jon Sesso, D-Butte, said if lawmakers work well together, it’s possible to wrap up early, but that finishing early isn’t a goal of his.

Members of the 89th Cavalry Montana National Guard and the 2nd U.S. Cavalry Association prepare to fire a 19-gun salute for the inauguration of Gov. Steve Bullock on Monday in Helena.

Former Montana Gov. Brian Schweitzer makes his farewell speech at the inauguration of his successor, Gov. Steve Bullock, on Monday.