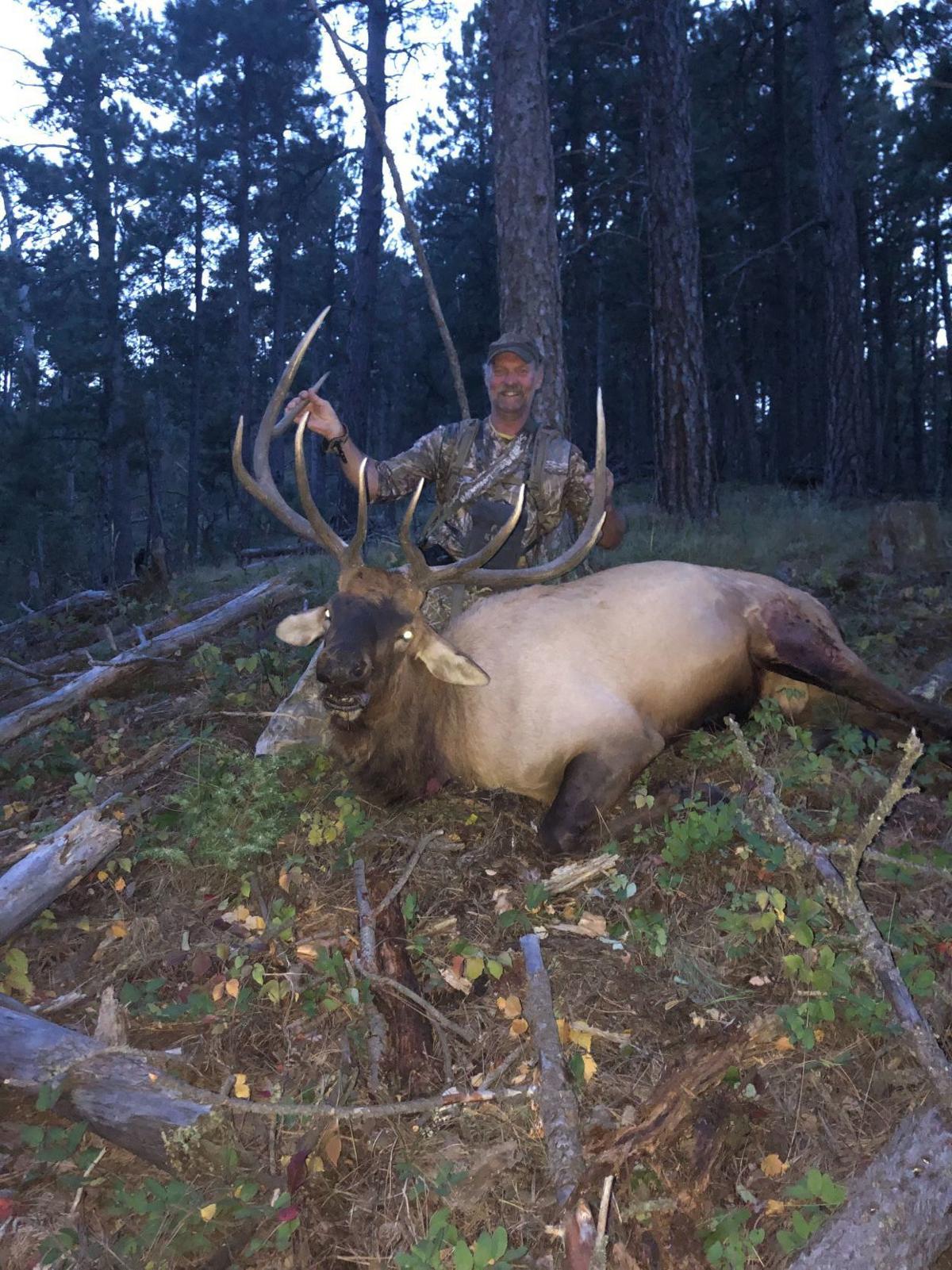 Wayne Schmautz, shown here, and his son Eric, both of Mandan, harvested bull elk in Montana in September. It was the first archery elk for both men. The elk were taken in a two-hour span and 160 yards apart. 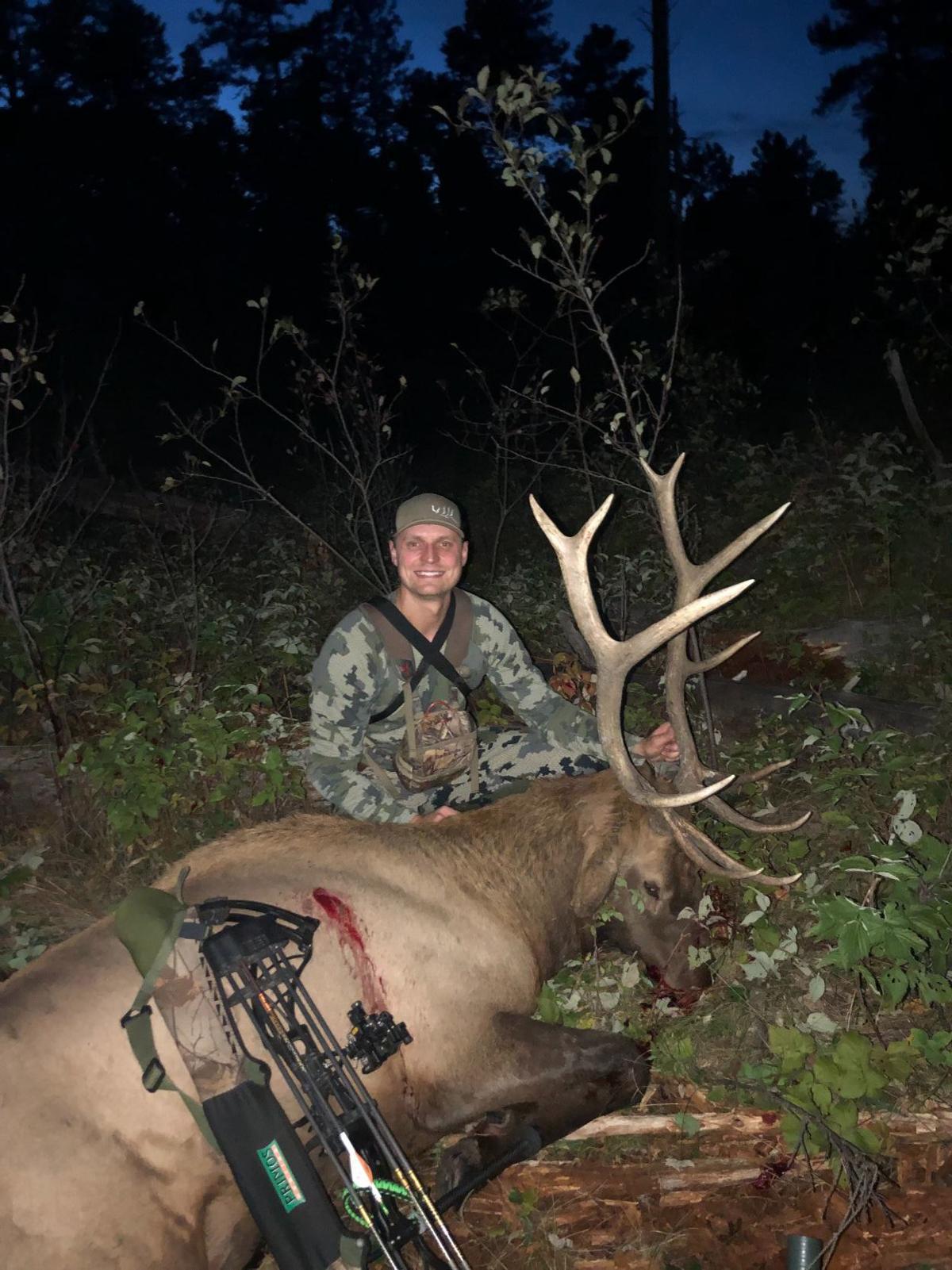 Eric Schmautz, shown here, and his father, Wayne Schmautz, share a number of hunting memories, but a recent hunt in which they each harvested their first archery elk, one within shouting distance of the other, has risen to the top of that list.

BISMARCK, N.D. — Eric Schmautz and his father, Wayne Schmautz, share a number of hunting memories, but a recent hunt in which they each harvested their first archery elk, one within shouting distance of the other, has risen to the top of that list.

The two Mandan men hunted Montana public land in September, having secured tags in a limited-draw area. They’d been on waterfowl hunts, trapped together and been on other hunting trips for deer, antelope and moose. Eric started applying for the elk tags when Wayne told him he had another hunt in mind.

“I told him if there’s anything I want to do in my lifetime, it’s go shoot an elk with my bow,” Wayne said.

Getting the tags was the easy part. One Montana Fish, Wildlife and Parks official estimated the success rate for archery elk hunters at less than 25%.

Eric, 32, put in some hunting time midmonth in what he called “badland-ish” country but was unsuccessful in filling his tag. On Sept. 18, he and his father went back together and had the same lack of luck for several days. Their plan on Sept. 24 was to come home that night, elk or no elk. A friend gave them some options for locations that might produce elk.

“We just decided we’re going to go to this one spot and we’ll see what happens,” Eric said.

It wasn’t long before their strategy paid off. They were walking a ridgeline and nearing the point where they could see both sides of the ridge when they heard a bugle. Then came another to their left, another farther down the ridge and another beyond that.

Wayne, 61, set up at a tree on the west side of the ridge. Eric moved back a few yards and started a sequence of cow calls and bugles. Wayne turned to him after about 20 minutes and said a bull was coming. He’s hunted deer with his bow since he was 16 and drew on that experience for his first elk, telling himself, “just make a good shot, a good killing shot.”

He pulled his bow as the bull went behind a tree, took a couple of steps and let the arrow go through a small opening in the trees. The elk was hit, and Wayne confirmed only a few inches of the arrow were visible. Eric looked through his binoculars and saw the elk walking but staggering.

They decided to wait before trying to track it, and as they started the discussion that follows almost every hunt — their observations, the sequence of events that led to the shot — they were interrupted by another bugle. They continued calling, working their way down the ridge over the next hour or so to an open area of burned timber. Eric found a spot against a tree, settled in and continued calling. It wasn’t long before another bull, 100 yards away, started making its way toward them.

Eric pulled his bow before the bull was in the open area. It stopped at about 40 yards, and Eric’s arrow found its target.

“We hugged it out and we’re like ‘man, I think we got two bulls down,’” Eric said.

They did have two bulls down, and they did so in the span of about two hours. Wayne stepped off 160 yards between the two. They aren’t of trophy size, Eric said, but the hunt fulfilled their expectations.

“For public land bulls, we’re both very, very happy,” he said. “For doing it yourself on public land, it’s a pretty good achievement, I thought, for both of us.”

The two men have hunted deer and antelope in a couple of states, geese, ducks and upland game birds, and gone after moose in Alaska. This hunt ranks “No. 1 all-time” for Eric.

“It’s a father-son deal, first archery elk for both of us together, and for me to call his bull in, and then him to be there for me when I shot my bull,” Eric said. “The whole experience, I couldn’t ask for anything better.”

Wayne echoed Eric’s thoughts, saying it was gratifying to watch how Eric has become “a hell of a hunter” in his life.

“How many times can a father and son go out and shoot two bull elk in the same canyon?” he said. “It’s just stupid how it happened.”

Hunting, Wayne said, is good for everybody because it offers teaching opportunities and family time. He has another hunting partner in daughter Danielle, 29, who has hunted deer with him since she was 16.

“It’s just a good time, being with your kids, seeing how they grow up,” he said. “It’s just neat.”

Three Yellowstone National Park entrances have opened in Montana after they were closed two months ago to prevent the spread of the coronavirus.

Celebrate summer, but please be safe

Summer is just around the corner. On calendars the first official day is June 20.

Wayne Schmautz, shown here, and his son Eric, both of Mandan, harvested bull elk in Montana in September. It was the first archery elk for both men. The elk were taken in a two-hour span and 160 yards apart.

Eric Schmautz, shown here, and his father, Wayne Schmautz, share a number of hunting memories, but a recent hunt in which they each harvested their first archery elk, one within shouting distance of the other, has risen to the top of that list.