Despite meetings among outfitters, guides, anglers, Fish, Wildlife & Parks officials and Fish and Wildlife Commission members in those intervening years, making a decision to deal with the problem has become even more complicated.

On Wednesday in a marathon seven-hour meeting burdened with a sense of urgency, the commission took the first confounding steps to tackle the problem, guided by a proposal from FWP's fisheries staff.

The biggest changes will be on the upper section of the Madison River below Quake Lake. Between June 15 and Sept. 30 the section between Raynolds Bridge and Lyons Bridge would be open on Saturdays and Sundays to fishing from a boat. This would be implemented on a trial basis in 2022.

Currently, floating is allowed in that section but not fishing from a boat. The goal is to use that section of river to help relieve some of the crowding issues by spreading anglers out.

Helena angler Hugh Zackheim decried the change to what has been a wade-only section of river for 60 years, calling it a “travesty.” He said the goal of the new rules was to address overuse, “not to create new problems.”

In that same summer timeframe, outfitters and guides would be prohibited from conducting business from Lyons Bridge to Palisades Day Use Area on Sundays, and from Varney Bridge to Ennis on Saturdays. The trial program would begin in 2023.

Outfitters and guides would have their trip numbers capped at either their 2019 or 2020 season, whichever is highest. The total cap for commercially guided anglers would be 14,500 trips a year. The cap would go into effect in 2022.

FWP had initially considered a Madison River user stamp for anyone recreating on the river as a way to gather more information on how, when and where anglers, guides and pleasure floaters are using the waterway. Instead, the department has proposed using sign-in boxes, like those used by hunters for the Block Management Program, interviews and cameras to gather information.

Any department acquisition for a fishing access site below Greycliff FAS made after January 1, 2021, would be designated as carry-in only without boat ramp development to keep the lower section of the river in a wilder state.

A full review of all the Madison River rules would be undertaken every five years beginning in 2024.

The department’s proposal would be phased in over three years. A 12-member working group would help guide the implementation and modification of the rules going forward. The commission expanded the group to include a representative of the Bureau of Land Management, which cooperates with FWP on access issues along the river, and a member of the Fish and Wildlife Commission.

One of the big unknowns that could be worked out in next year’s Legislature is the ability for outfitters to allocate days to other guides or outfitters. The allocation of days are not allowed to be monetized under current statute.

More details on the new rules can be found on the FWP website at: http://fwp.mt.gov/doingBusiness/insideFwp/commission/meetings/agenda.html?meetingId=63453365

Last-minute modifications to the FWP proposal from the George Grant Chapter of Trout Unlimited and the Fishing and Outfitters Association of Montana threw the commission’s Wednesday deliberations into disarray. The two groups are at the center of the latest discussion after they separately submitted petitions to create rules to deal with the Madison River's crowding.

FWP’s proposal was an attempt to mesh the separate petitions which in the beginning contained little common ground.

Late on Monday night the two petitioners combined for a compromise proposal they submitted to the commission for consideration, decrying FWP's proposal in the process.

"We reject wholeheartedly the recommendation from Fish, Wildlife & Parks," said Michael Bias of Fishing Outfitters Association of Montana, noting that little of what his group had proposed was contained within the agency's proposal.

Likewise, Steve Luebeck of GGTU criticized the FWP proposal, saying the goal of his group was to not create winners and losers.

"We've come a long way to make this work for everyone," he said.

Both groups also agreed that the commission needed to take action immediately. Should a decision carry over into the new Governor-elect Greg Gianforte administration, they worried that much of the experience and depth of knowledge of the current commission would be lost.

As passed by the commission, the new rules could be in effect before the end of the year.

The most recent effort to deal with the issue of crowding on the Madison River has been more than two years in the making. More than 1,200 pages of comments were reviewed regarding the two petitions. They came from 33 different states and 35 Montana communities, reflecting the river is a “national treasure,” said Don Skaar, Habitat and Access Bureau Chief.

“Most of the comments reflect a personal connection to the river,” he said.

“Some even referred to the river as a she.”

Cabin owners around Tepee Lake in northwestern Montana have petitioned the Fish and Wildlife Commission to ban motorized watercraft on the lake. 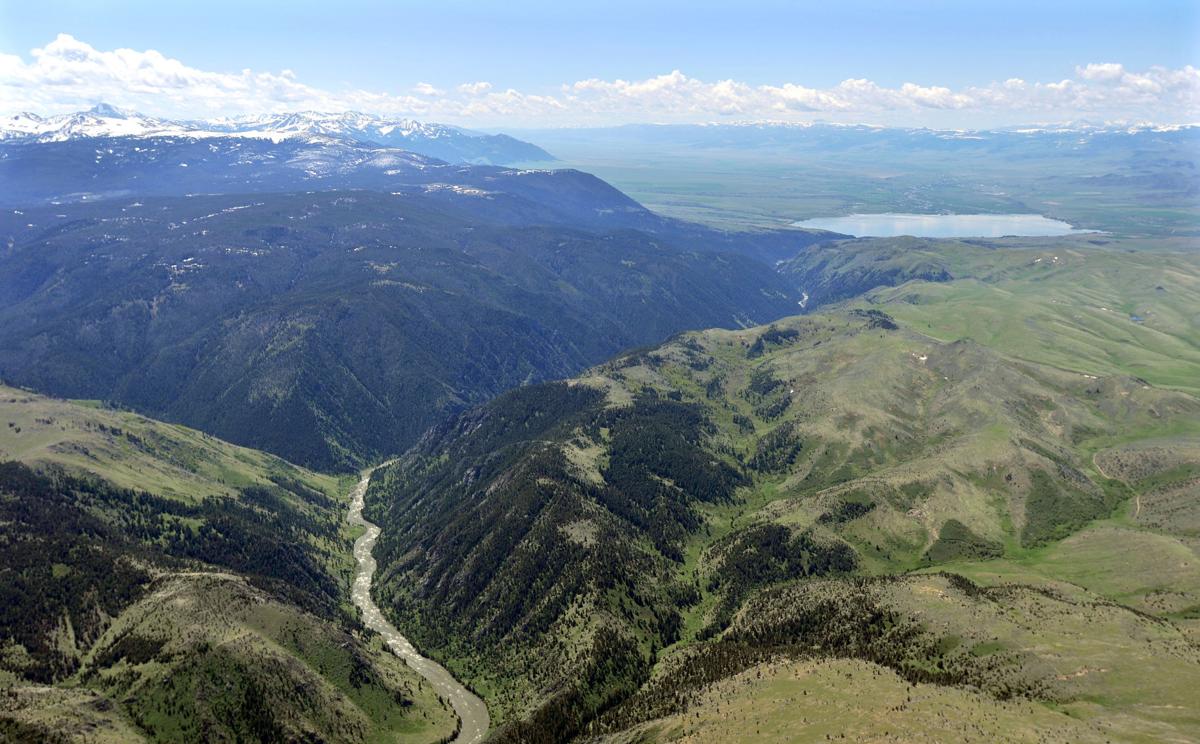 The Madison River flows through the Beartrap Canyon below Ennis Lake in this aerial view. The river is jointly managed by the Bureau of Land Management and Fish, Wildilfe & Parks. 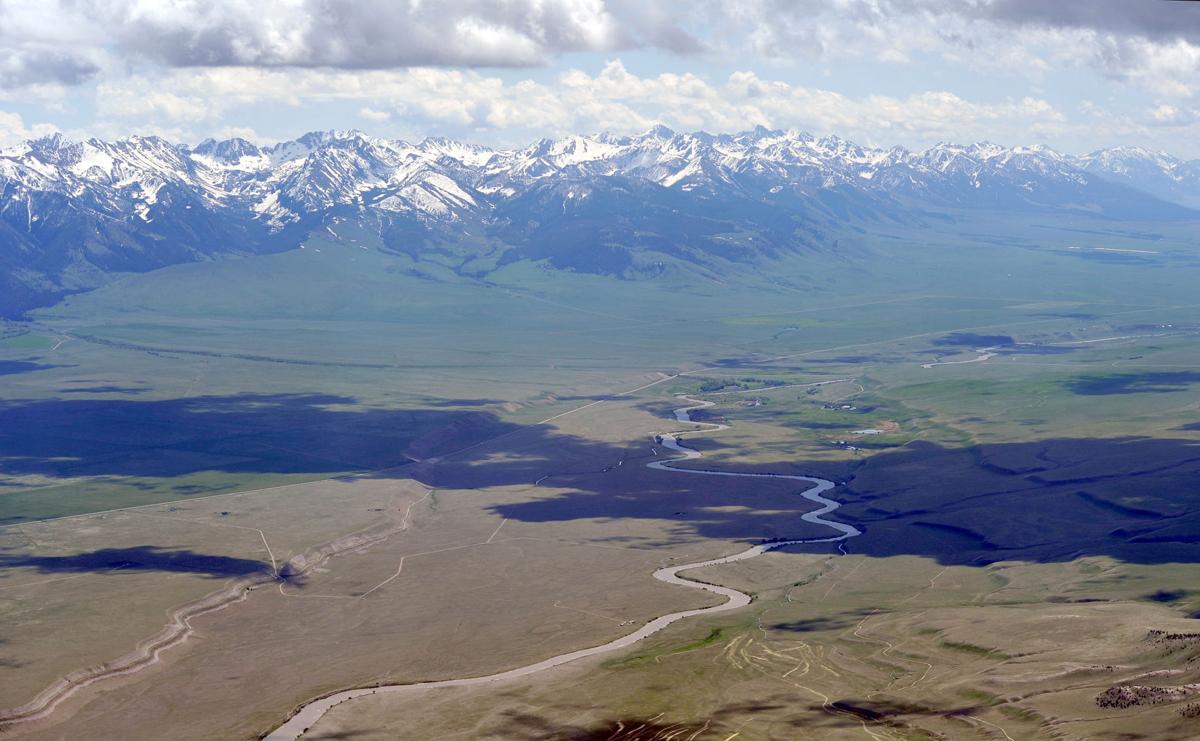 The Madison Range forms a backdrop for the Madison River near Ennis. New rules were adopted by the Fish and Wildlife Commission on Wednesday that are meant to reduce crowding on the popular fishing stream.