The heritage muzzleloader hunt is the product of legislation earlier this year and the recent adoption of regulations by the Montana Fish and Wildlife Commission. Hunters are restricted to traditional flintlock, matchlock, wheel lock and percussion muzzleloaders, a minimum of .45 caliber and maximum of two barrels and iron sights. Any deer or elk permit or license valid on the last day of the general firearm season may be used. 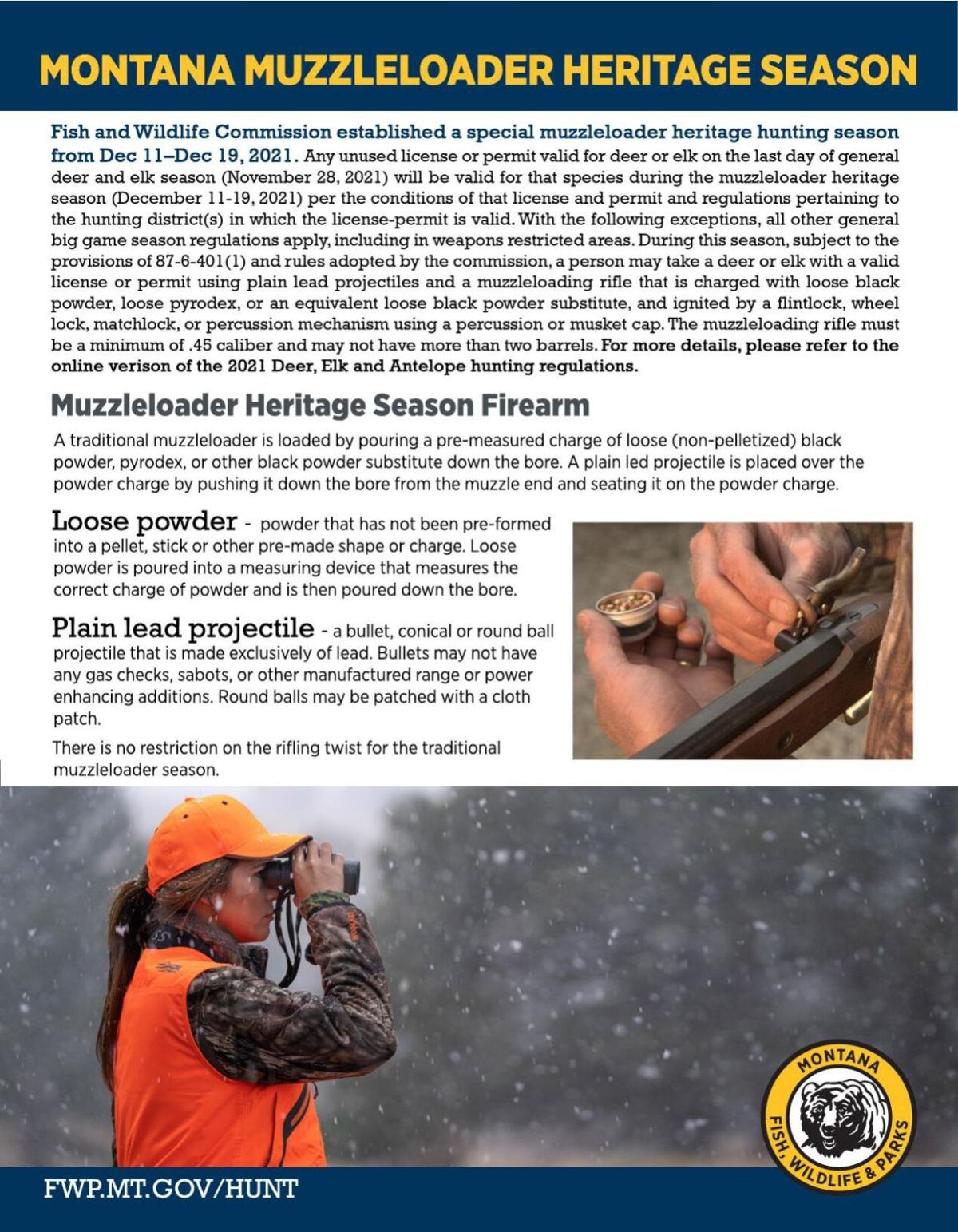 Rep. Caleb Hinkle of Belgrade brought House Bill 242 that established the muzzleloader season. The Republican traced the idea to his fascination with history and his father introducing him to movies depicting the use of muzzleloaders during the Civil War and by early fur trappers.

“Anyone who truly knows me knows I’ve been a huge history buff since elementary school,” he said in a recent interview. “… (Muzzleloaders) are like works of art that really became utility in people’s lives for survival.”

Both traditional and modern muzzleloaders have long been allowed during general firearm hunting seasons and weapons’ restricted areas. But until the passage of HB 242 Montana was the last state to not have a special season set aside for muzzleloaders.

Republicans and Democrats were largely split on the bill, with Republicans that hold majorities in favor and Democrats opposed. Opposition centered less on the concept of a special muzzleloader season, but more on whether the season should occur in winter and whether a season should be placed in law rather than through commission adoption of a hunting season. Ultimately, Republicans coalesced around a new hunting opportunity and promotion of history.

Hinkle says he enjoys the challenge that comes with using a traditional muzzleloader that requires close-range shooting, noting it took him years to finally take his first deer. He uses a Kentucky rifle, a long barreled muzzleloader that fires by using a piece of flint striking powder in a pan to create a spark that enters the side of the barrel and ignites the main charge.

“Why I like flintlocks personally is because they’re not like anything else I’ve ever fired,” he said. “There’s a flash and then the bang, so you really have to hold the rifle steady, and that’s an extra challenge. There’s just something really unique about them.”

Hinkle opposes allowing modern muzzleloaders with scopes that can shoot much longer ranges, saying he hopes the wildlife commission does not choose to add them down the line.

He recommended hunters interested in trying out a traditional muzzleloader do their research on the different types of firearms and then spend plenty of time practicing. Based on letters he has received, Hinkle believes the hunt will grow in popularity.

Alex Vissotzky, a member of Flathead Valley Muzzleloaders, said the club has received quite a bit of interest following adoption of the new season. He echoed that history and the challenge influenced his decision to use a muzzleloader.

“It’s just fun to take out, and the whole history part of it, but it really adds a challenge because you have to get closer and know your firearm very well to be efficient and effective with it,” he said. “It’s similar to doing it with a bow with the added challenge.”

When asked about advice for a hunter thinking about picking up a traditional muzzleloader for the first time and using it in the upcoming season, Vissotzky emphasized the need for practice before trying to shoot an animal.

“I’d say they need to prepare for next year, because if they haven’t started for this year, it’s getting late in the game,” he said. “It takes work and practice with that gun, you need to develop a load … and like any other hunting season it takes time to prepare.”

Montana Fish, Wildlife & Parks is taking a long-term approach to the new muzzleloader season as it looks to how it will track hunters and success, said spokesman Greg Lemon. The agency will do its normal year-end phone survey for hunters, but does not plan to add questions specific to the muzzleloader season, he said.

“We’ll take a look if there’s a need after a year or two to dissect the data and check (hunter) involvement,” he said. “Typically, for instance, when we’ve had some weapons-restricted areas added to the landscape, with participation we have a pretty good idea based on on-the-ground experience and wardens checking on people.”

Lemon noted that hunters should check area closures before venturing out. Some state wildlife management areas close on Dec. 1 and adoption of the new season does not change those closures, he pointed out.

In fiscal year 2021 ending in June, state trust lands produced $107.3 million, up from $92.1 million in the last fiscal year. Revenue comes from a combination of agriculture, timber, public access, real estate and minerals.

Hydrologists are looking to this winter and spring for a potential rebound from Montana’s widespread drought this year.

Grant funding announced this week from a nationwide emissions settlement with Volkswagen will go toward installing new electric vehicle charging stations in Montana. 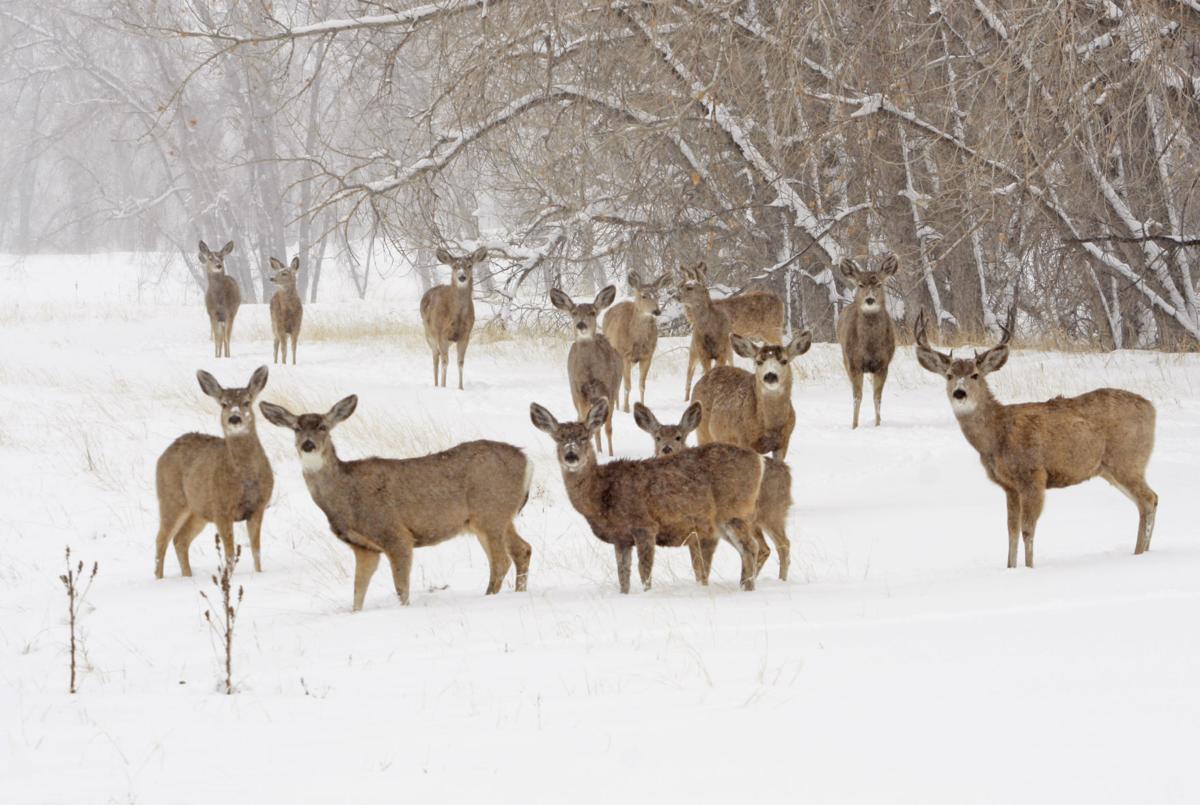 A herd of mule deer stands in the snow. 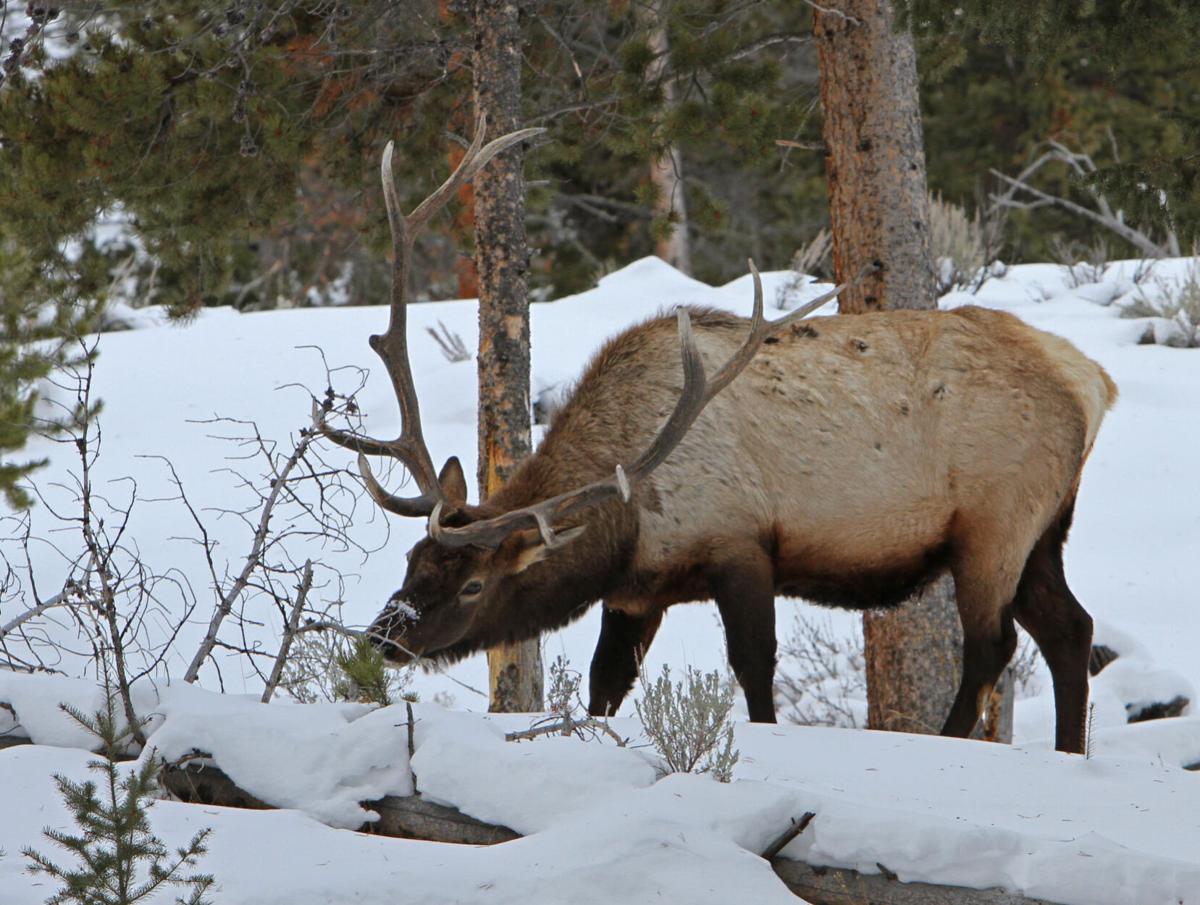 A bull elk browses on a lodgepole pine seedling. The first muzzleloader season in Montana will be open for deer and elk.