Some floaters must wait years to draw a permit for Montana’s Smith River.

Many of the thousands who put in for the annual lottery vie for what is considered the peak season running from roughly mid-May to mid-July. It is a time historically where flows remain high enough to navigate the gravel bars and canyons for a pleasurable multi-day float.

This spring flows plummeted early. By mid-June river gauges began recording a streak of record low daily flows, bumped up for a day or two at times by rainstorms, but still far below recommended levels for floating. That has left hundreds of permit holders once hopeful for the trip of a lifetime with the unenviable position of canceling their trips.

“We fully understand and appreciate how much it means to float the Smith for the folks who were lucky enough to draw a permit,” said Colin Maas, manager of Smith River State Park. “But we want them to be fully aware and prepared for the difficult conditions they will encounter should they attempt to float the river at these current water levels.”

That is not to say that the Smith, or other rivers for that matter, are hitting record lows overall, but typically the current levels are not seen until later in the summer.

The state does not prohibit floaters from launching regardless of the flows, Maas said, but does offer recommendations on types of watercraft. For example, it is not recommended drift boats attempt to float below 350 cfs; inflatable rafts at 250 cfs; or kayaks and canoes below 150 cfs.

A typical flow for the Smith in mid-June is north of 500 cfs, but on Friday flows were only about 83 cfs near Fort Logan. Floaters attempting the river at low levels will need to drag boats across gravel bars.

Maas said he and others have been surprised by the extreme conditions this year considering decent snowpack and then a significant winter storm that hit Montana in late May. Although a few floaters continued to launch last week, the vast majority have canceled their trips.

Other areas of concern

The Smith, which officials say will have fishing restrictions due to high water temperatures as soon as Monday, is far from the only river seeing unseasonably early low flows.

“Temperatures are high and flows are low in every part of the state,” Eileen Ryce, fisheries division administrator for Montana Fish, Wildlife & Parks, told the Montana Fish and Wildlife Commission on  Thursday. The Ruby River is now in its second round of fishing closures as flows dipped and temperatures bumped upward.

Biologists identify low flows and water temperatures above 70 degrees as major stressors for fish, particularly Montana’s wild trout populations. To protect fish, officials often enact restrictions prohibiting angling in the heat of the afternoon or, in some cases, all together.

Biologists have also documented significant declines in brown trout populations in multiple southwest Montana rivers. Flows and temperature are factors they are looking at as potential causes or contributors to the trend.

The Montana Climate Assessment notes that while yearlong stream and river flows are predicted to slightly increase overall, historic observations have shown a shift toward earlier runoff peaks and lower flows later in the summer.

A swath of southwest into central Montana shows numerous river and stream gauges recording low flows for this point in the summer.

The Jefferson River has hit record lows in the last week, the Shields River recorded a record low on Friday and major rivers such as the Big Hole and Beaverhead are below the 10th percentile for daily flows.

On Friday, FWP announced the lower Madison River will go under “hoot-owl” restrictions, meaning fishing will be closed from 2 p.m. to midnight. The restriction comes after water temperatures from Ennis Lake to the confluence with the Jefferson topped 75 degrees every day since June 21.

“Never, we’ve never had hoot-owl closures this early,” said Mike Bias, executive director for the Montana Fishing Outfitters Association. “You know it’s like everyone is walking on egg shells right now, hoping for a miracle.”

Bias said he has not heard of widespread cancelations for guided trips, but concern about the drought, river flows and temperatures is region-wide. He is particularly surprised to see flows on the Big Hole, where extensive work has gone into bolstering in-stream flow, dip below the 10th percentile.

Bias notes that as restrictions go into place that means waters, such as the dam-controlled Madison and Missouri rivers, will likely see a surge in use.

Michael Downey, water planning section supervisor for the Montana Department of Natural Resources and Conservation, said weather patterns in the spring led to some unusual conditions for irrigators. For example on the Teton Conservation District, green up came nearly three weeks behind normal and high temperatures hit in June, drying things up and keeping grasses from reaching full potential.

“In terms of range production, that’s a bit of a perfect storm there,” he said.

“It gets really tricky and it speaks to a year like this year, it speaks to the difficulty and the hard job our water commissioners have,” he said.

Watersheds with drought management plans in place will trigger restrictions for water users based on temperatures or flows. Many factors are at play in the plans, including how many water users are on a water supply and how big the water supply is. Also, much comes down to the quality of relationships between water users on a certain river, Downey said.

Downey noted that it would take a significant shift in weather patterns to change conditions statewide, which current forecasts do not call for.

At a recent wildfire briefing for Gov. Greg Gianforte, a National Weather Service meteorologist said current long-range forecasts call for significant drought and above-average wildfire conditions across Western Montana through July and the entirety of the state by August. The state has already seen some major wildfires for this point in the season as well.

Low snowpack limited inflows into Ruby Reservoir this year, keeping it from filling completely. Additional low inflows into the river have also minimized water supply with the river gauge falling below 20 cfs by mid-June, well below the fifth percentile for that time period.

Fishing on the Ruby will not reopen until flows near the Ruby’s confluence with the Beaverhead top 40 cfs for a week or until Oct. 15.

“We’re trying to balance the needs of users who rely on water from the Ruby while maintaining flow levels that fish need,” he said. “Water levels at Ruby River Reservoir peaked at 93% of capacity this year, which is the first time since 2003 that the dam didn’t spill.”

The city of Helena is asking residents to help with water conservation efforts this summer, noting a 60% increase in usage during some days ea…

Blistering heat continued to pound the Helena area on Tuesday, but local health officials warned the worst is yet to come as the National Weat…

Gov. Greg Gianforte was not among the list of Western governors invited to meet with President Joe Biden Wednesday to discuss the federal government’s firefighting programs.

In Bozeman, Helena, Butte and Dillon, authorities are either asking or telling residents to cut back on nonessential water use.

Smith River managers say some changes may be needed to mitigate soaring pressure and interest. 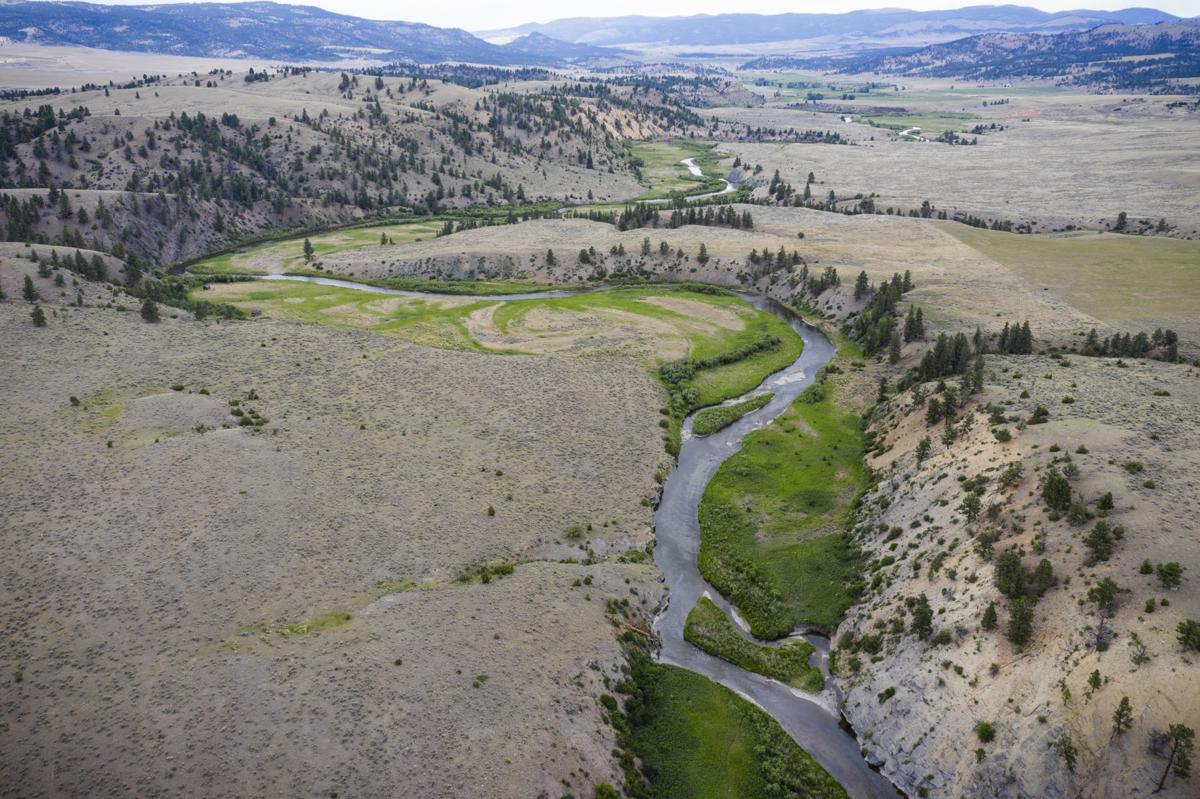 The Smith River near Fort Logan on Thursday. A typical flow for the Smith in mid-June is north of 500 cfs, but on Friday flows were only about 83 cfs near Fort Logan. 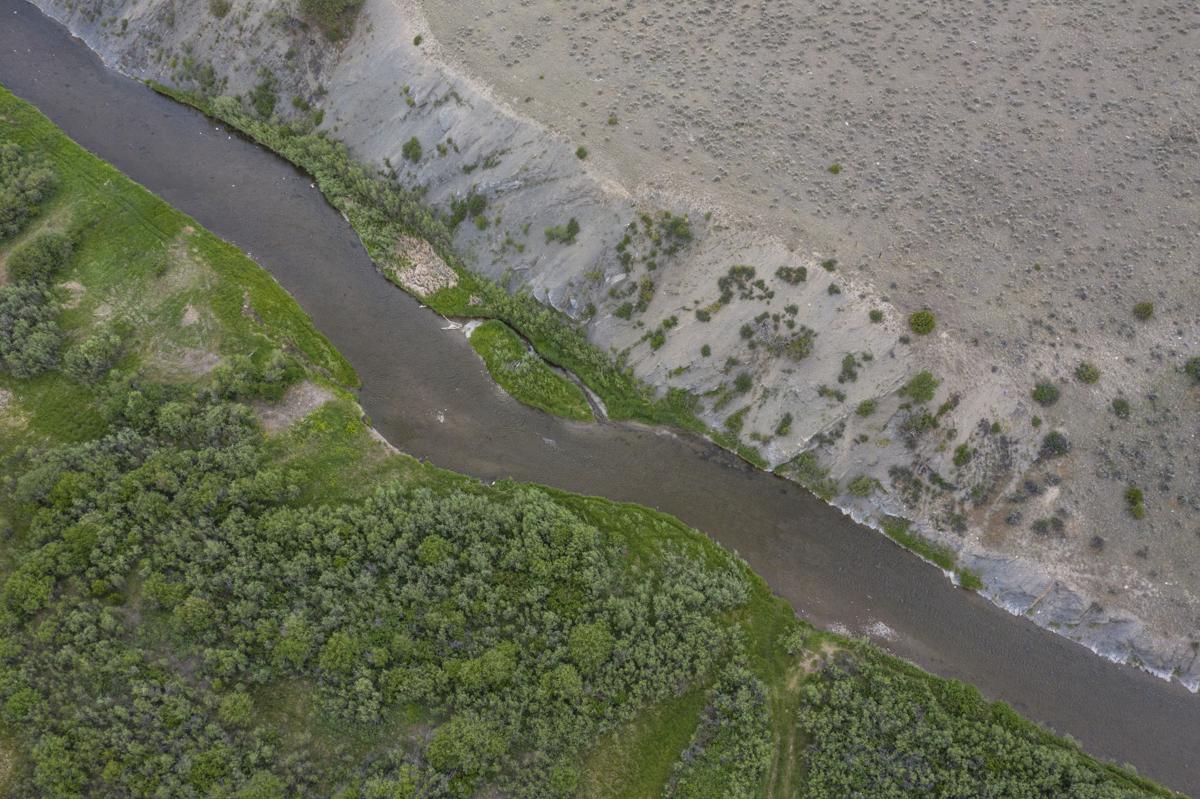 People with permits to float the Smith River may be forced to cancel because of low water flows. By mid-June river gauges began recording a streak of record low daily flows far below recommended levels for floating. 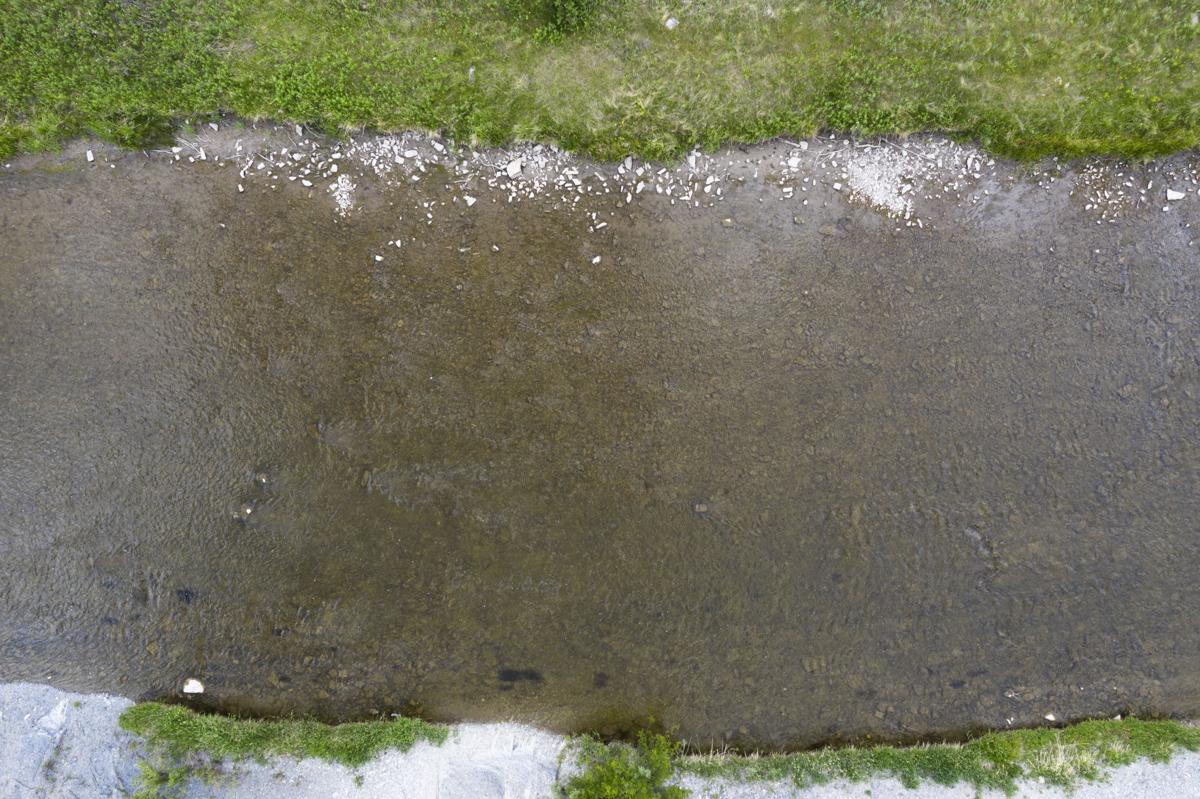 Some floaters must wait years to draw a permit for Montana’s Smith River. 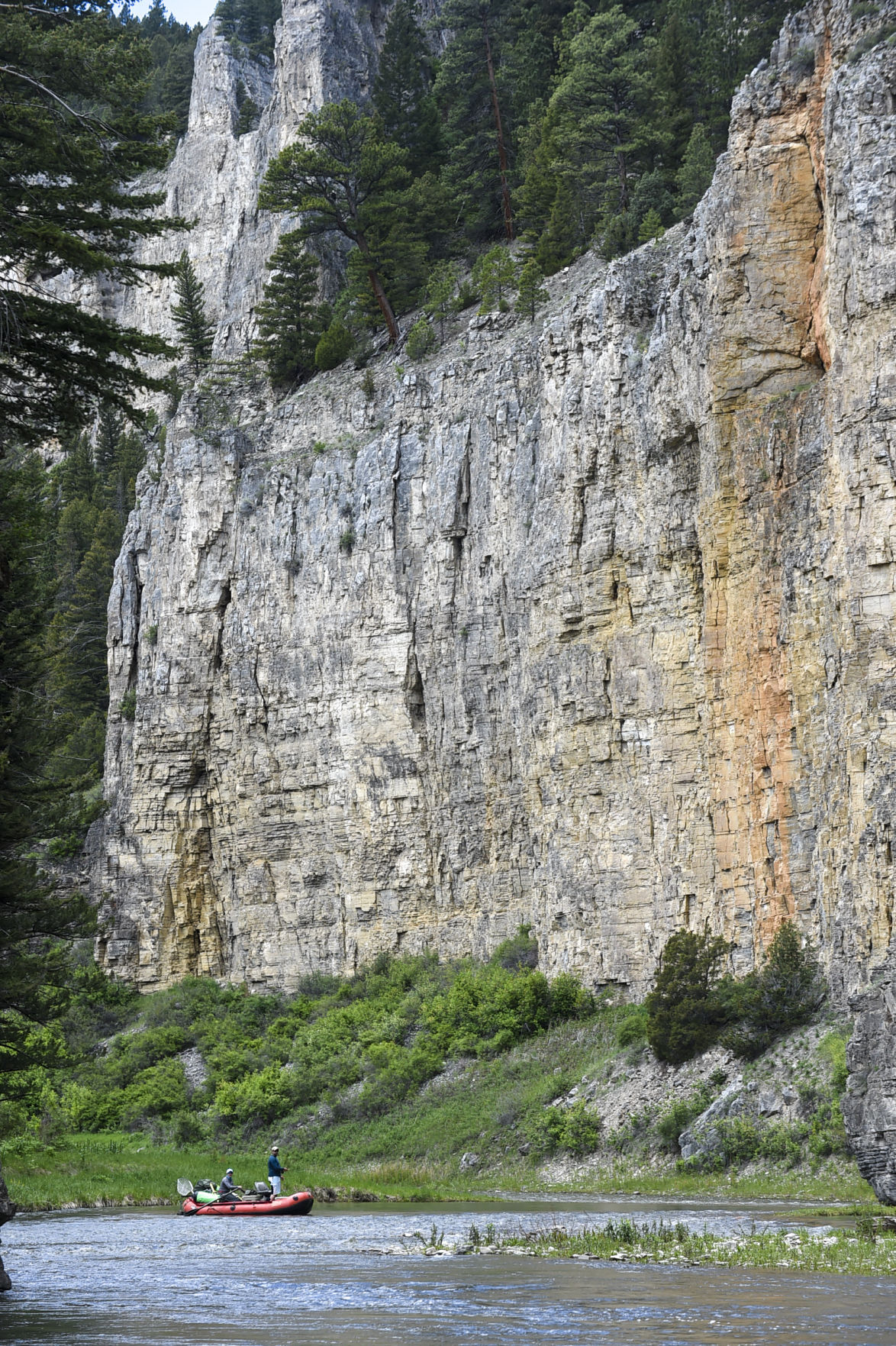 A raft of anglers is dwarfed by the canyon walls on the Smith River in this IR file photo. Many of the thousands who put in for the annual lottery to float the Smith vie for what is considered the peak season running from roughly mid-May to mid-July. 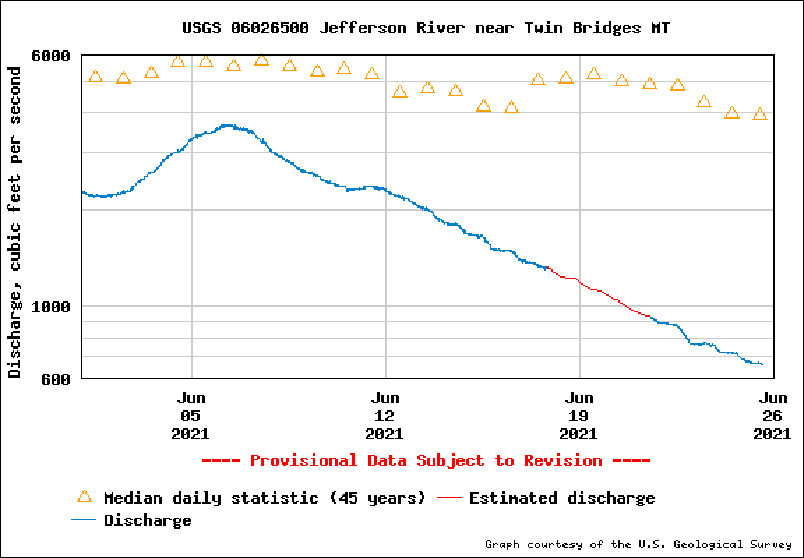 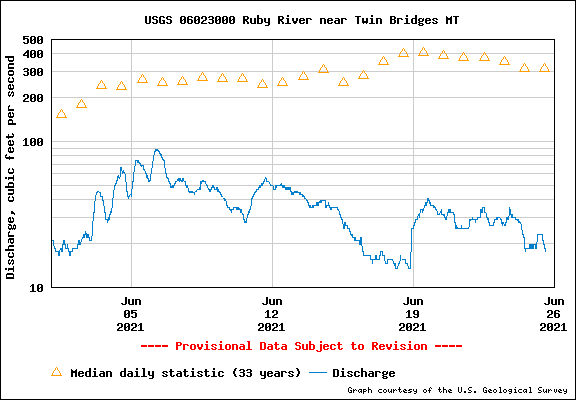 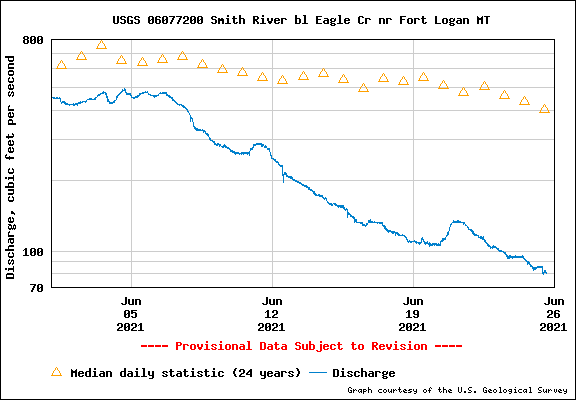 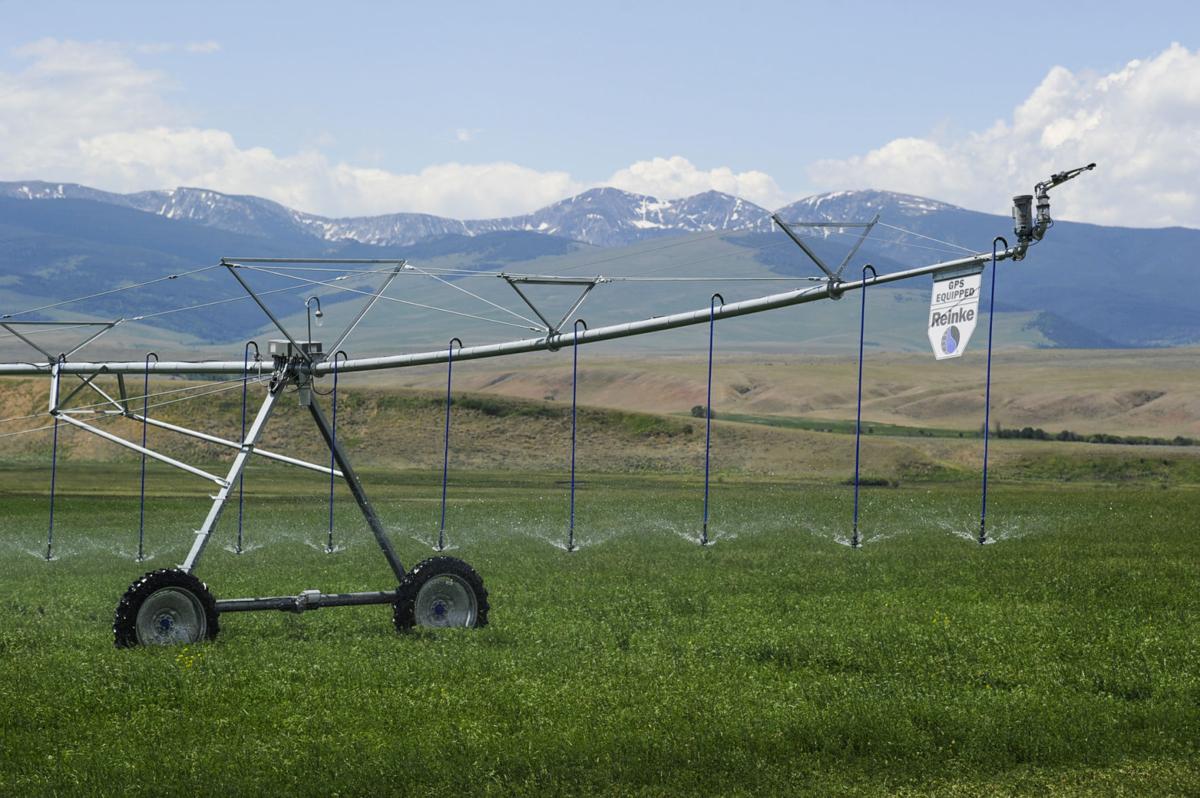 An irrigator waters an agricultural field outside White Sulphur Springs on Thursday. Michael Downey, water planning section supervisor for the Montana Department of Natural Resources and Conservation, said weather patterns in the spring led to some unusual conditions for irrigators.