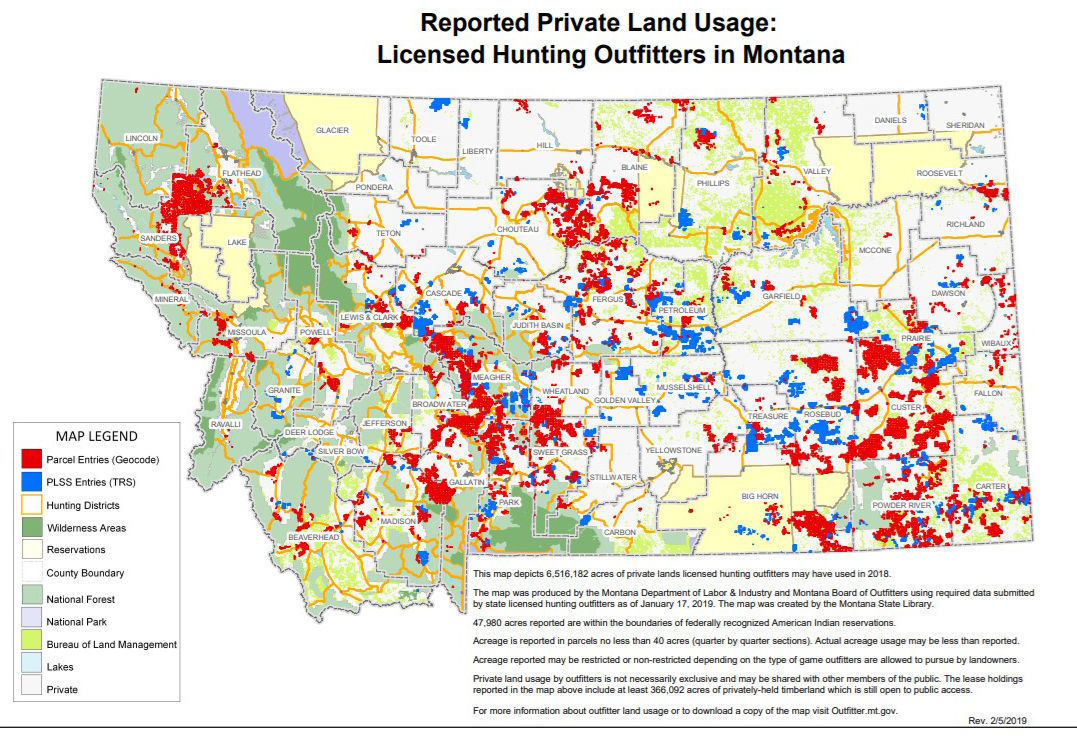 More than 6.5 million acres in Montana, shown here as blue and green, are leased by hunting outfitters in the state. Almost 48,000 acres is on Indian reservations. 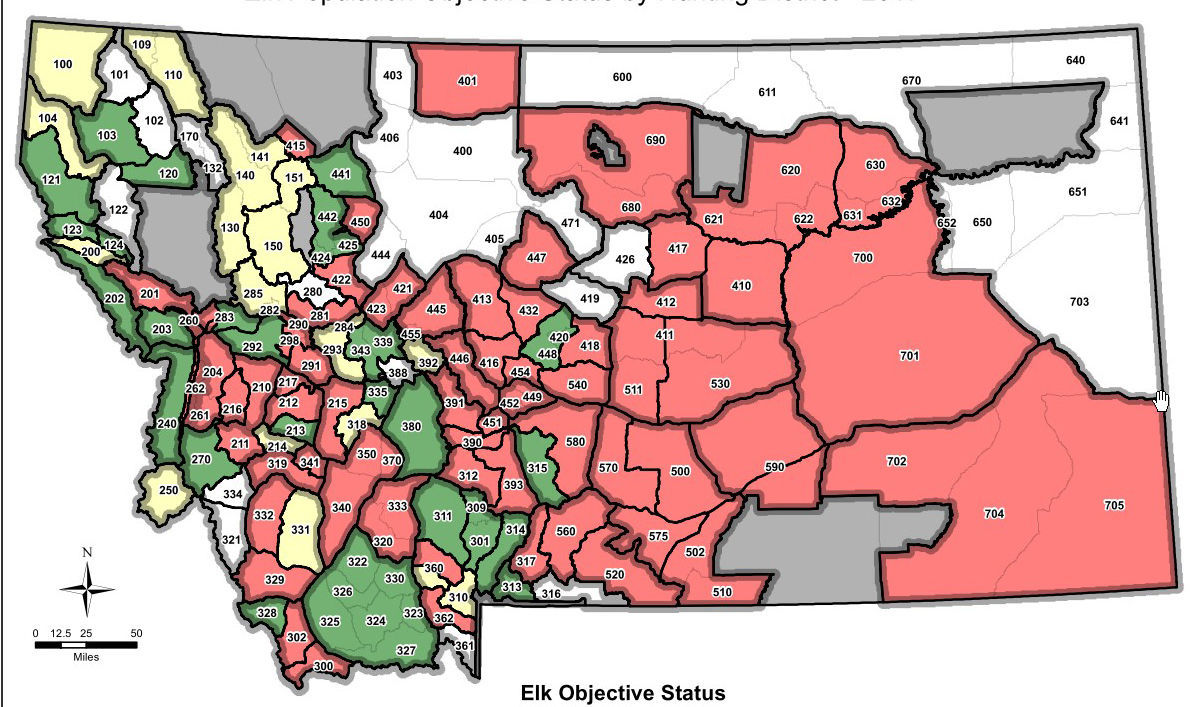 The pinkish areas on this map show hunting districts in Montana where elk were over population objectives in 2017.

The number is revealed in a newly published map produced by the Montana Department of Labor and Industry’s Business Standards Division. The map is required by state rule.

The last map the Business Standards Division released in 2016 caused an uproar when inaccurate data put the amount of outfitter-leased lands at more than 18.6 million acres. The glitch was blamed on a database that never shed outdated information.

“Part of what we ran into in 2016 is, we knew the data wasn’t good … but there was pressure to kick it out,” said Todd Younkin, administrator for the Business Standards Division.

Now the information will be updated annually, when outfitters renew their licenses with the state between November and December, Younkin said.

“We built all of this data from the ground up,” he said. “Outfitters will be required to verify (their leased acreage) at renewal.”

“We have a great deal of time and energy invested in making this thing accurate,” said Rob Arnaud, owner of Montana Hunting Co. in Bozeman and a member of the Board of Outfitters.

That time and energy included educating hunting outfitters about how to enter their information correctly, he said.

Many of the areas where outfitted acres are concentrated are places that correspond with where Montana Fish, Wildlife and Parks is over its socially set elk population objectives.

Arnaud said he hadn’t compared the maps to see if they corresponded.

Increasing the elk harvest on private land has been a continuing challenge for FWP because of the difficulty of accessing herds with public hunters — the state’s main means to control wildlife populations. Leased lands are sometimes managed to exclude public hunters for a variety of reasons — from ensuring large bulls for paying clients to keeping sometimes disrespectful public hunters off private lands.

“We need to work with them, of course,” said John Vore, FWP Game Management Bureau chief. “I think everyone realizes that public hunting is the tool we have to manage to objective.”

"We agree that we need to manage elk down to the objective," he said. "We've long advocated doing that by having public hunters on the ground."

Outgoing Fish and Wildlife Commission chairman Dan Vermillion, of Livingston, said that elk overpopulation is not as much lack of access to elk because of outfitting as it once was.

FWP has requested funding for a person to rewrite and oversee implementation of a new elk management plan. Vermillion said he’d like to see that document ease the population objectives so they are not an absolute number, such as are currently in place.

Previous outfitter-leased acreage maps were produced in 2005, 2007, 2011 and 2013. In 2005 the map showed, within a 7 percent margin of error, that 5.6 million acres were being used by licensed hunting outfitters. In 2011 that had jumped to 7.79 million acres of private lands that “may have been used by licensed outfitters,” but didn’t report property under 40 acres.

The Montana Outfitters and Guides Association has opposed the reporting requirement in the past. But Gov. Steve Bullock has said the data is vital to the management of wildlife, the setting of hunting seasons and “critical for the activities of the Private Land/Public Wildlife Council,” which works on land access issues.

Wyoming side of Beartooth Scenic Byway scheduled to open Friday

The Wyoming side of the Beartooth Pass is scheduled to open on Friday, providing motorists access between Red Lodge and Cooke City via Highway 212.

More than 6.5 million acres in Montana, shown here as blue and green, are leased by hunting outfitters in the state. Almost 48,000 acres is on Indian reservations.

The pinkish areas on this map show hunting districts in Montana where elk were over population objectives in 2017.