Yellowstone Caldera Chronicles is a weekly column written by scientists and collaborators of the Yellowstone Volcano Observatory. This week's contribution is from Zach Lifton, geologist with the Idaho Geological Survey.

The Yellowstone volcanic field is located in northwest Wyoming, near the borders of Montana and Idaho. The arrival of volcanoes in that area is geologically recent, however volcanism associated with Yellowstone has migrated over 400 miles across southern Idaho in the past 16 million years.

Yellowstone is a hotspot volcano. Volcanic hotspots are fed by plumes of hot material rising from deep in the Earth, which can result in the formation of magma closer to the surface and that might eventually erupt. As the North American tectonic plate moved southwest through time over the mostly stationary plume, a series of eruptions occurred, forming a hotspot "track." The result is a chain of ancient volcanic fields that started more than 16 million years ago near the Idaho/Nevada/Oregon border and that gets progressively younger across southwestern Idaho and the eastern Snake River Plain.

While most volcanic activity occurs near the boundaries of tectonic plates, hotspot volcanoes are unique because they can develop in the interiors of plates far from their boundaries. Hotspots were first recognized after plate tectonic theory revolutionized geology.

As geologists began collecting more and better seafloor data in the 1950s and 1960s, they noticed strings of volcanoes lined up along straight paths. Dating rock samples from those volcanoes also revealed that they were arranged in chronologic order, getting progressively younger in one direction along the paths. One of the best-known examples of a hotspot track is the Emperor Seamount-Hawaiian Ridge. The youngest volcanoes from this hotspot are exposed above the surface as the Hawaiian Islands, but older, submerged volcanoes are stretched out over nearly 3,500 miles, all the way to the Kamchatka Peninsula of Russia.

At the same time the Yellowstone hotspot was initially erupting at the McDermitt volcanic field about 16 to 17 million years ago, another major volcanic event began reshaping the northwestern United States. Between 17 million and 14 million years ago huge volumes of basalt lava erupted out of cracks and fissures and covered much of Washington, Oregon, and western Idaho — the Columbia River Basalts. The total volume of lava erupted was approximately 42,000 cubic miles, which is enough to cover the entire U.S. (including Alaska and Hawaii) in a layer of lava 58 feet thick.

The passage of the Yellowstone hotspot also affected earthquake activity in Idaho, Montana, Wyoming, and Utah. In the late 1980s and early 1990s, geologists observed a unique pattern of seismicity around the Yellowstone hotspot track. The locations of earthquakes and fault activity forms a distinct "parabolic" pattern around the track of the Yellowstone hotspot. This "seismic parabola" is sometimes described as a bow wave forming in the wake of the hotspot. Along the seismic parabola are some of the most active faults in the region, including the Lost River fault (source of the 1983 magnitude 6.9 Borah Peak earthquake), the Hebgen fault (source of the 1959 magnitude 7.3 Hebgen Lake earthquake), the Teton fault, and the Wasatch fault. In contrast, the region inside the seismic parabola (the eastern Snake River Plain) is almost totally devoid of seismic activity.

The geologic events related to the Yellowstone hotspot drastically changed the northwestern U.S. and created the extremely unique geologic setting we know today.

BOZEMAN — For over 100 years, scientists have studied the heat-loving microbial life in pools and springs on the surface of Yellowstone Nation…

Yellowstone Caldera Chronicles is a weekly column written by scientists and collaborators of the Yellowstone Volcano Observatory. This week's contribution is from Laura Blackstone, Yellowstone Geology Program guest scientist, and Jefferson Hungerford, park geologist at the Yellowstone Center for Resources. 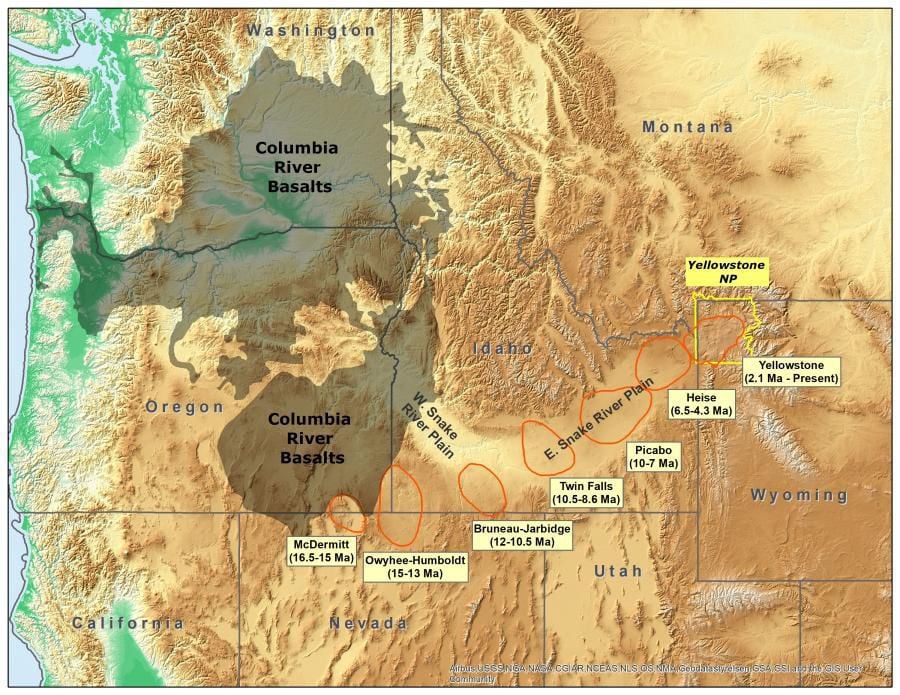 This map of the Northwest shows the approximate locations of Yellowstone hotspot volcanic fields (orange) and Columbia River Basalts (gray). The boundary of Yellowstone National Park is shown in yellow. 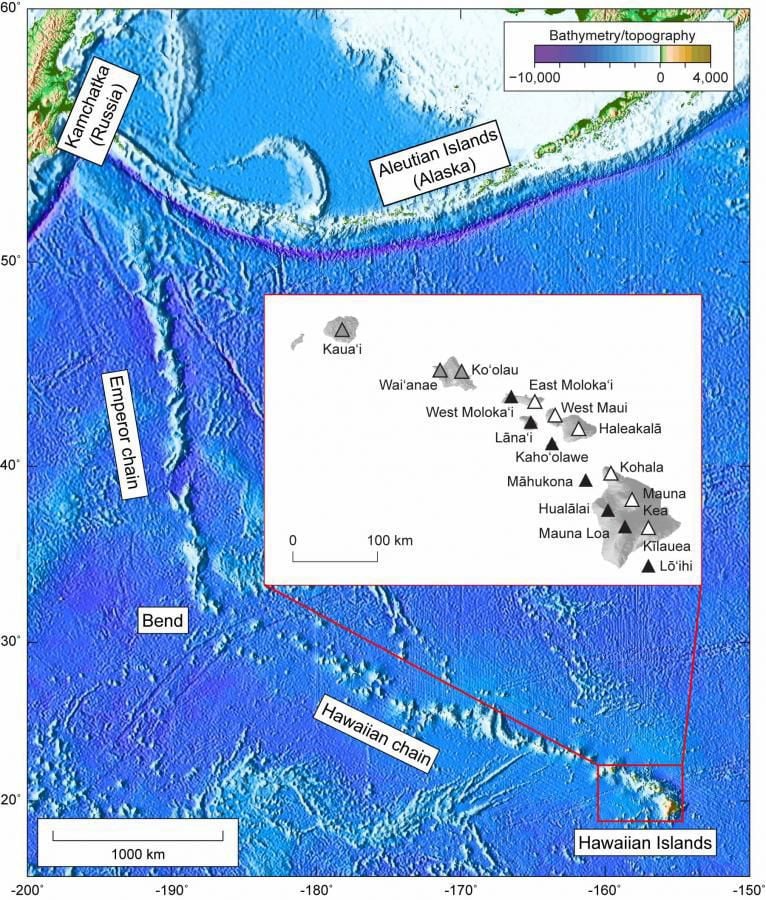 This map shows the submarine shape of the Hawaiian hotspot track, which extends from the Hawaiian Islands, through a prominent bend in the middle of the Pacific Ocean, to Alaska's Aleutian Islands. The inset shows the volcanoes in the main Hawaiian Islands. After the formation of O‘ahu, the volcanoes can be categorized as belonging to either the "Loa" (black triangles) or "Kea" (white triangles) trends, based on their location and the composition of their rocks.