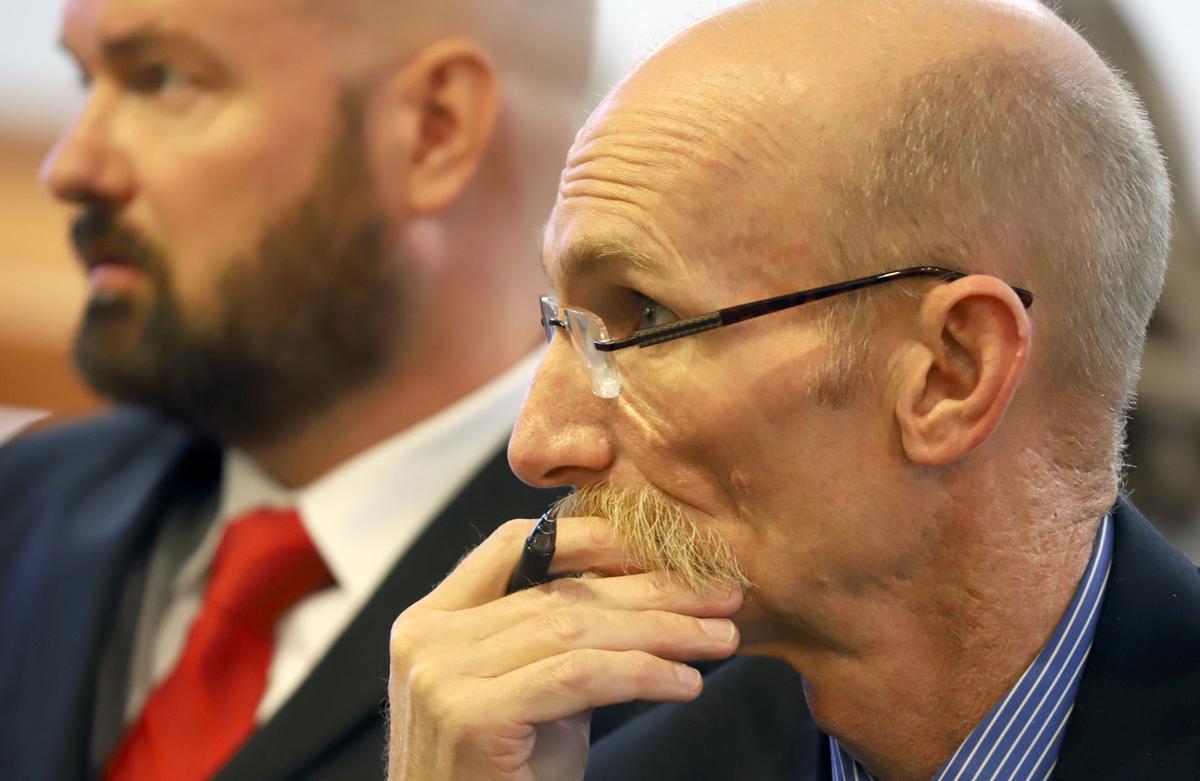 Hamilton vape store owner Ron Marshall listens to testimony in Ravalli County District Court. Marshall and his wife, Deanna, own Freedom Vapes stores in Hamilton, Belgrade and Bozeman. They joined two other Montana vape store owners and a trade association in a lawsuit seeking to stop a ban on flavored vape products. The store owners say the ban would put them out of business. 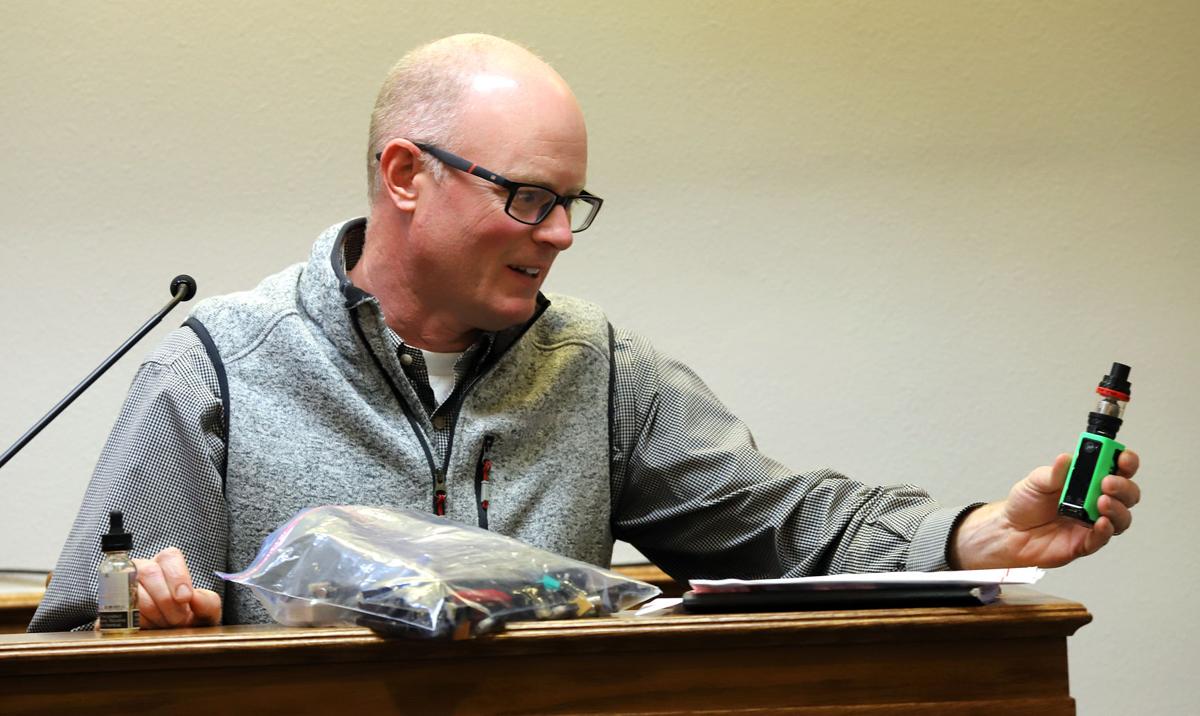 Former Hamilton High School principal Dan Kimzey shows the court one of several vaping devices he seized from students over the years. Kimzey appeared in Ravalli County District Court Wednesday to tell of his experiences with students and vaping during a hearing regarding a lawsuit seeking an injunction on a proposed ban on flavored vaping products.

A Boston University School of Public Health professor known for his longtime advocacy against big tobacco companies told a Ravalli County court Wednesday the state was missing the mark in its proposed temporary ban on flavored vape products.

Citing the most recent information released by federal health authorities that appears to narrow the cause of a mysterious and deadly pulmonary illness to products containing THC, Dr. Michael Siegel said the proposed rules could make the outbreak worse by forcing people to seek out products on the black market.

Later, during the same daylong hearing before Ravalli County District Judge Jennifer Lint, Missoula pediatrician Dr. Lauren Wilson said the ban was needed to slow a different kind of outbreak that was hooking a new generation on nicotine.

Wilson testified the flavored juices with names like Ice Candy Pop, Slamming Watermelon and Strawberry Rolls were driving a huge jump in the numbers of teenagers to start vaping and get hooked on nicotine.

In early October, Montana Gov. Steve Bullock signed off on emergency rules that would implement a 120-day ban on the sale of flavored vaping products following an outbreak of pulmonary illness nationwide attributed to vaping. At the time, Bullock said e-cigarettes were a growing epidemic that was harming youth.

Several Montana vape shops and the Montana Smokefree Association filed suit in Ravalli County asking for a preliminary injunction that would stop the ban from being implemented. Lint signed a temporary restraining order and set Wednesday for a hearing on the matter.

The hearing was originally set for a half-day. The state’s last two witnesses will appear Friday.

Vape store owners said the flavored vape products that make up the majority of their sales are almost entirely used by former combustible tobacco smokers who want to wean themselves off nicotine.

Deanna Marshall of Hamilton’s Freedom Vapes testified she and her husband started their vape store business after she discovered vaping as an alternative to her three-pack-a-day cigarette habit. The couple initially opened a store in Belgrade and now have three locations, including Bozeman.

“I would say that 99% of our customers are former smokers,” Marshall said. “We don’t have people coming in here wanting to start vaping. Every month, we have a few people come in and tell us they’ve been able to quit.”

Tommie Dobbs, who owns Liberty Vapor Smoke in Missoula and Lucas Anderson, who owns uBlaze Vapor in Billings also testified. The store owners said Wednesday that they have strict policies in place to ensure that they don’t sell to minors. None sell THC-laced products.

Marshall said about 75% of her sales come from flavored vape products. She and other vape store owners said they would have to close their businesses and lay off employees if the ban is put in place.

Siegel said the most comprehensive investigation completed yet, conducted in Utah by federal Centers for Disease Control, found that 94% of patients with the pulmonary illness reported vaping THC products.

He called those findings "incredibly striking because we know that people tend to underreport their THC use, especially youth,” he said. “Young people are reluctant to tell their parents that they are buying from a street dealer.”

About 89% of the THC vape cartridges tested in the CDC study contained vitamin E acetate oil, which Siegel said is a newly introduced product being used on the black market as a thickening agent.

The nicotine cartridges tested in the Utah study found no abnormalities, Siegel said.

Since the pulmonary illness appears to be something new, Siegel said it’s unlikely that it would be caused by products that have been available for years at retail outlets.

At the same time, Siegel agreed there has been a huge jump in the use of vape products by people under the age of 18, which is also an important health issue that needs to be addressed.

“I think what’s happened with many health departments, especially on the state level, is that they are conflating the problem with youth vaping with this respiratory illness,” he said. “I think they are two separate problems, but by conflating them, it’s misleading people in the public to think that e-cigarettes are causing the outbreak, not THC.”

“I don’t think the message is getting through,” Siegel said. “In order to curtail the outbreak, we need to stop youth from vaping THC. … People are not getting the message that they shouldn’t be using THC with all the focus on flavored e-cigarettes. With the attention coming off THC, I think this is going to make the outbreak worse, not better.”

Former Hamilton High School Principal Dan Kimzey has seen the popularity of vaping grow over the past five years. A recent survey indicated that 30% of the school’s students said they had vaped over the last 30 days. About 12% said they used cigarettes.

“We see more kids over a larger cross-section of social classes vaping,” Kimzey said. “It doesn’t have the same stigma as smoking cigarettes and it’s easier to be secretive. If a kid smoked a cigarette in a bathroom, they would absolutely be identified, but if they vaped, it’s easy to go undetected.”

Kimzey said students have told him they were worried they had become addicted to nicotine due to vaping.

“I do think they are kind of attracted to the flavored juices,” he said. “It’s rare to find any vaping products that aren’t fruity.”

Both Kimzey and Jeff Lloyd, a school resource officer from Missoula, said most of vaping products they find are the smaller pod type commonly sold at convenience stores. Those products are not sold at vape shops.

Wilson said physicians are worried about the “explosive growth” in the numbers of young people vaping.

“We’re alarmed and worried about the numbers of children using these products,” Wilson said. “We’re frustrated by the lack of action to address what we see as an emergency.”

A proposed constitutional amendment aiming to pump the brakes on growing residential property taxes got an icy reception from legislators last week.

One patient advocate told lawmakers Friday that the workforce shortage at Montana State Hospital is putting patients and staff in "life-or-death" situations.

A truck driver from Texas said to have limited experience driving on snow and ice and two passengers in her Peterbilt 18-wheeler escaped serious injury early Tuesday when the eastbound truck jackknifed on Interstate 90 near Deer Lodge.

The victim of a skiing accident at Lost Trail Ski Area last week has been identified as 25-year-old William Benjamin Brown of Colorado.

A man upset with being charged a $150 fee for smoking in his motel room fired multiple rounds from an assault-style rifle into the building before driving away, authorities in eastern Idaho said.

A Helena judge on Tuesday said supporters of an initiative aimed at capping property taxes can start gathering signatures again.

A semitractor-trailer went off Interstate 90 just east of Bozeman and into the median before going down an embankment and across a county road that runs under the interstate, killing the driver.

Jan. 6th prosecutors use insurrectionist’s ‘Game of Thrones’ quote against him

Jan. 6th prosecutors use insurrectionist’s ‘Game of Thrones’ quote against him

Hamilton vape store owner Ron Marshall listens to testimony in Ravalli County District Court. Marshall and his wife, Deanna, own Freedom Vapes stores in Hamilton, Belgrade and Bozeman. They joined two other Montana vape store owners and a trade association in a lawsuit seeking to stop a ban on flavored vape products. The store owners say the ban would put them out of business.

Former Hamilton High School principal Dan Kimzey shows the court one of several vaping devices he seized from students over the years. Kimzey appeared in Ravalli County District Court Wednesday to tell of his experiences with students and vaping during a hearing regarding a lawsuit seeking an injunction on a proposed ban on flavored vaping products.